Assessment of Gas Demand in Spain for 2013

This drop has occurred as a result of the decrease in the production using combined cycles technology, which was 35.1% lower in 2013 with respect to 2012. The main factors behind the decline in the production using combined cycles is an increase in electricity generation with other technologies, such as hydroelectric and wind power, and the decrease in the electricity demand. In 2013, the wind production increased 13.2% with respect to 2012. Moreover, conventional hydroelectric production recorded an increase of 74.5% on a year-on-year basis. Finally, in 2013 the total electricity demand fell 2.2% comparing to the demand in 2012.

The conventional gas demand, consisting of the domestic, commercial and industrial sector, has fallen 0.6% in 2013 comparing to the conventional demand in 2012. 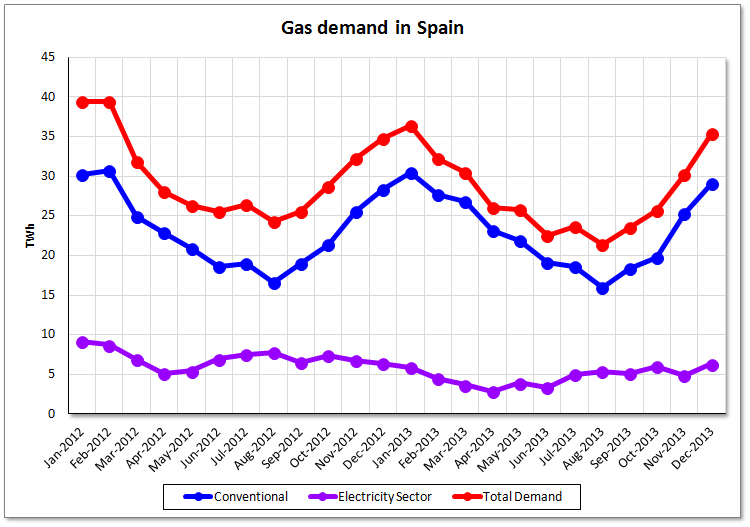 AleaSoft forecasts that the conventional demand for gas in Spain will decrease in 2014, compared to both 2012 and 2013. For this forecast, Aleasoft has used a cogeneration power scenario where the installed power of this technology will decrease by 5.0% in 2014 with respect to 2013. Moreover, a mean temperature scenario has been used and a GDP scenario where the Spanish economy will expand by 0.5%.

Analysis of the Spanish Wholesale Electricity Market during 2013notizie