January 26th, 2017 – This week the main markets in Western Europe have beaten record electricity prices, mainly from January 24th to 26th. The drop in electricity supply in France, due to the shutdown of nuclear power plants in that country, is increasing the market price of neighboring countries that export electricity to cover the demand in France. The most affected countries, not including France, are: Switzerland, Italy (mainly in the northern market), Belgium, Germany, Spain and the Netherlands. However, the United Kingdom, the Nordic countries and Poland have not been affected by this conjuncture.

In France (EPEX SPOT-France market), on January 25th the pool price amounted on average to 121.10 €/MWh which was the second highest price since the nuclear shutdowns began in October last year, only surpassed by the price on November 7th 2016 of 125.67 €/MWh.

In the Swiss market (EPEX SPOT-Swissix) prices have been higher than those of France 44% of the hours in the last three days. On January 25th the average price (117.91 €/MWh) was the fourth highest price since January 2012 followed by the average price in fifth place (116.83 €/MWh), on the 26th of the same month.

In Italy (IPEX market), the price of the northern zone has been equal to that of France in the great majority of the hours on the last three days. The average price on January 25th (120.30 €/MWh) is the fifth highest price since January 2012, followed by the January 24th price of 115.51 €/MWh. The PUN price has also been affected, however to a lesser extent, reaching on average 101.56 €/MWh on January 25th.

The price of the Belgian market (EPEX SPOT-Belgium) has been equal to and even higher than the French market on several hours in the last three days. On January 25th the average price reached 120.28 €/MWh, the fifth highest price since January 2012.

In the case of Spain (MIBEL), the price of the pool on January 25th (91.88 €/MWh) is the third highest in the history of this market, only surpassed by the prices on 8th and 18th of December 2013 (93.11 €/MWh and 91.89 €/MWh) when the Government decided to suspend the CESUR quarterly auctions. On the other hand, the minimum hourly price on January 26th has been 77.50 €/MWh at the 5th hour, positioning itself as the second most expensive minimum hourly price in the history of this market. The most expensive minimum hourly price had been recorded on December 8th, 2013 at 17 (83.40 €/MWh). In the case of Spain, in addition to the situation of the French nuclear power stations, other factors are causing the rise in prices: lower hydroelectric and wind power production, increased demand for lower temperatures and an increase in the price of fuels used in electricity generation, mainly gas. 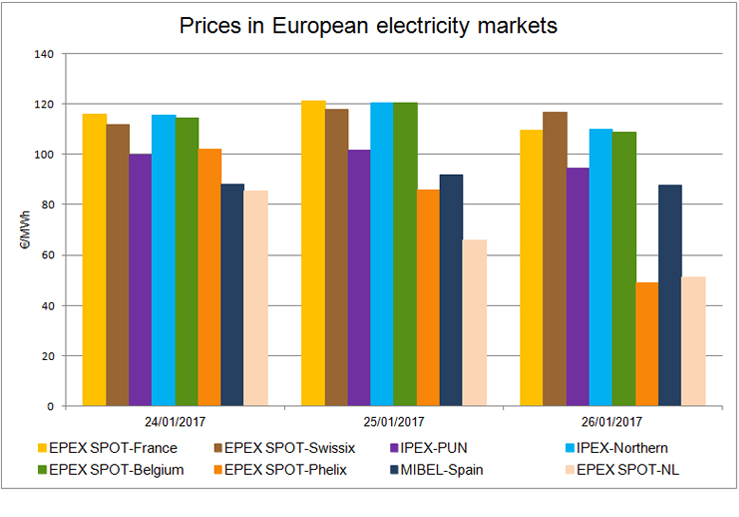