AleaSoft Energy Forecasting, September 1, 2022. In August, European electricity markets prices broke records that, in most cases, were set in July. The monthly average exceeded €435/MWh in almost all markets and there were hours above €800/MWh in some cases. Behind these increases are gas prices, which marked their historical monthly maximum in August. CO2 prices also influenced, which registered a new record on August 19.

In August 2022, the solar energy production increased year‑on‑year in all European electricity markets analysed at AleaSoft Energy Forecasting. The increases were between 8.8% of the Italian market and 38% of the German market.

However, compared to July of this year, there was a general decrease in solar energy production, with drops that were between 11% of France and 3.9% of Portugal. 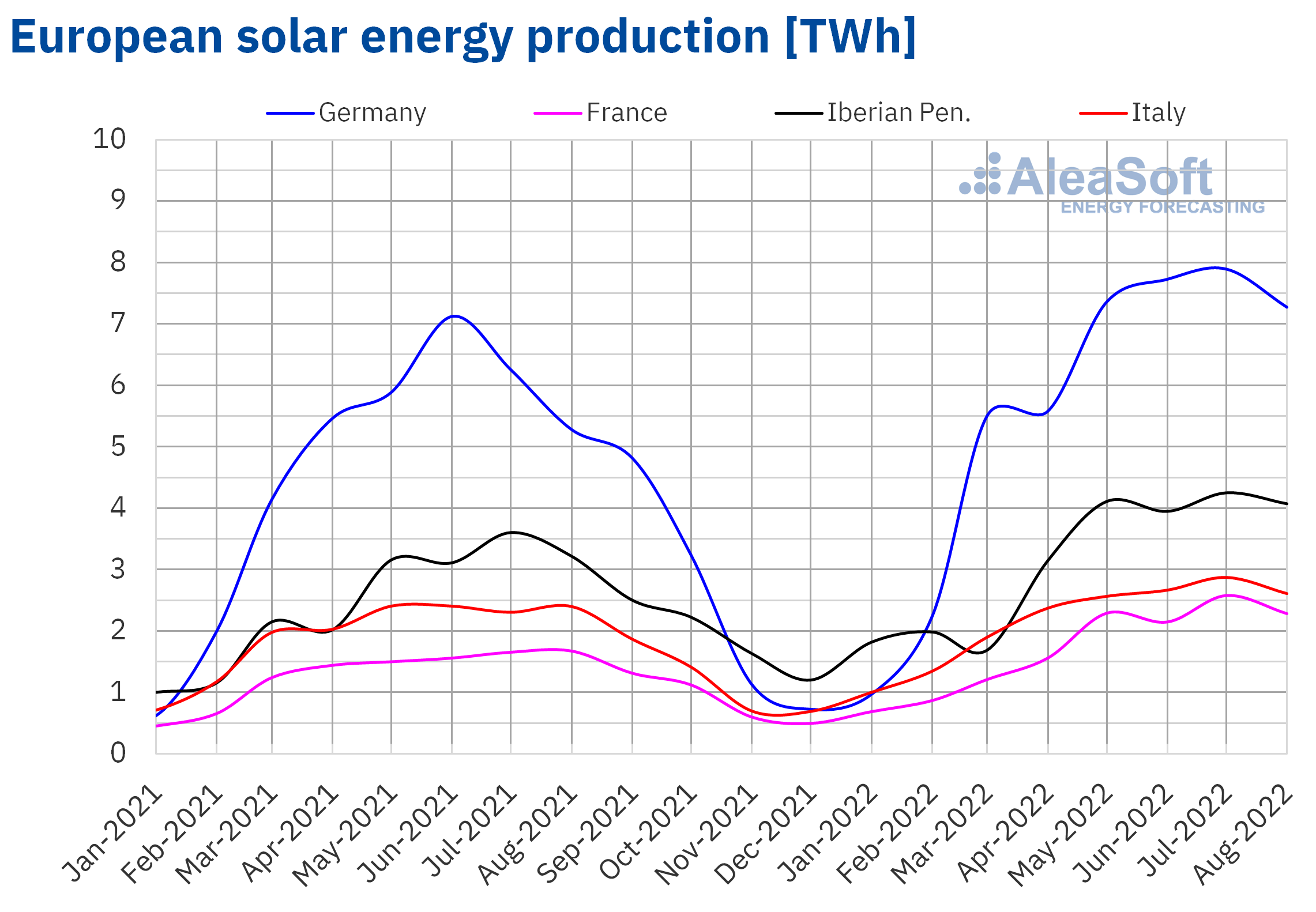 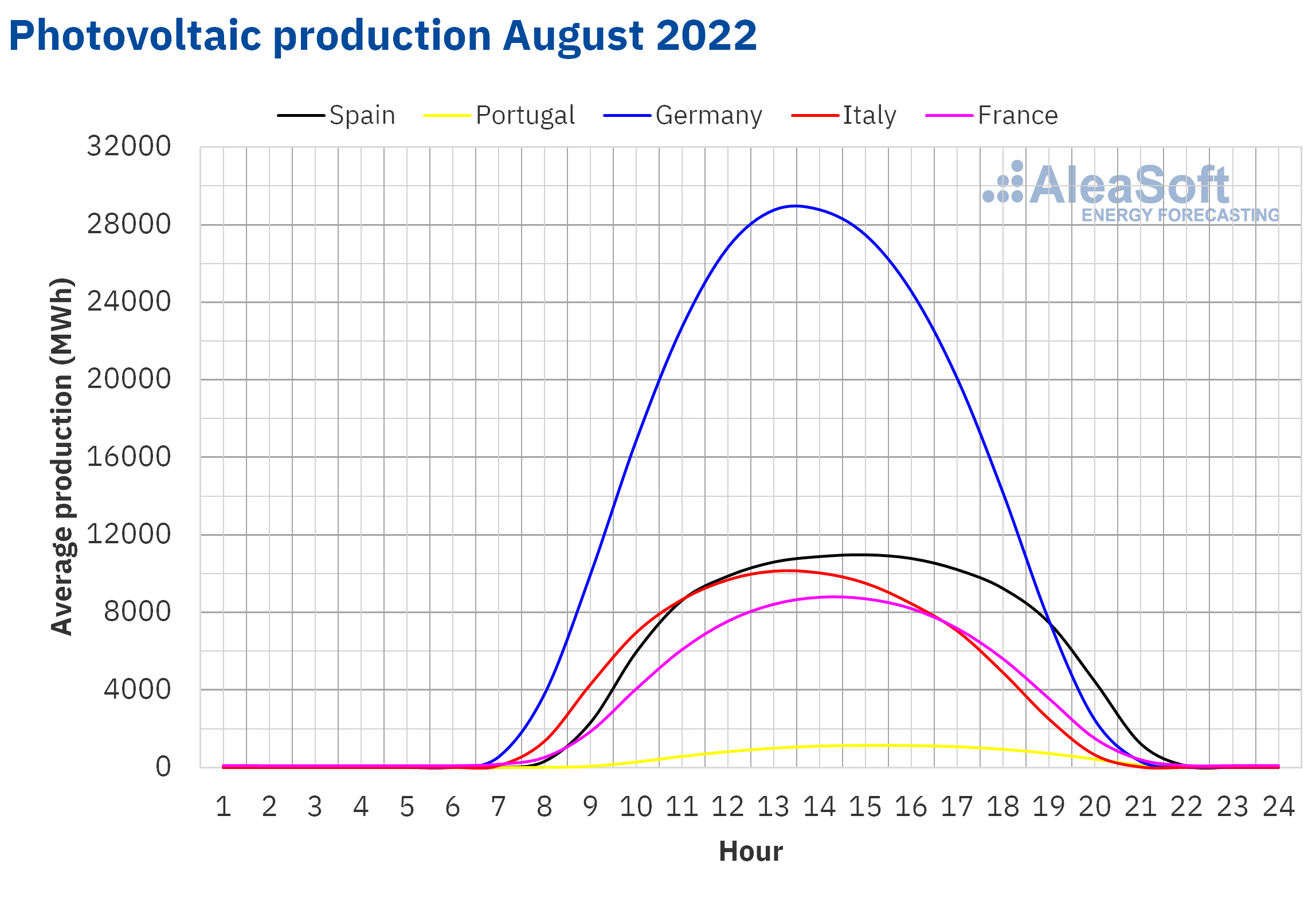 In the case of the wind energy production, a year‑on‑year increase of 7.7% was registered in Mainland Spain. However, in the rest of the markets, the production with this technology fell, with the largest decrease being that of the German market, of 44%.

When comparing the production of August with that of July of this year, there was an increase of 20% in Italy and 11% in France, while in the rest of the markets the wind energy production fell, between 37% of Germany and 8.4% of Portugal. 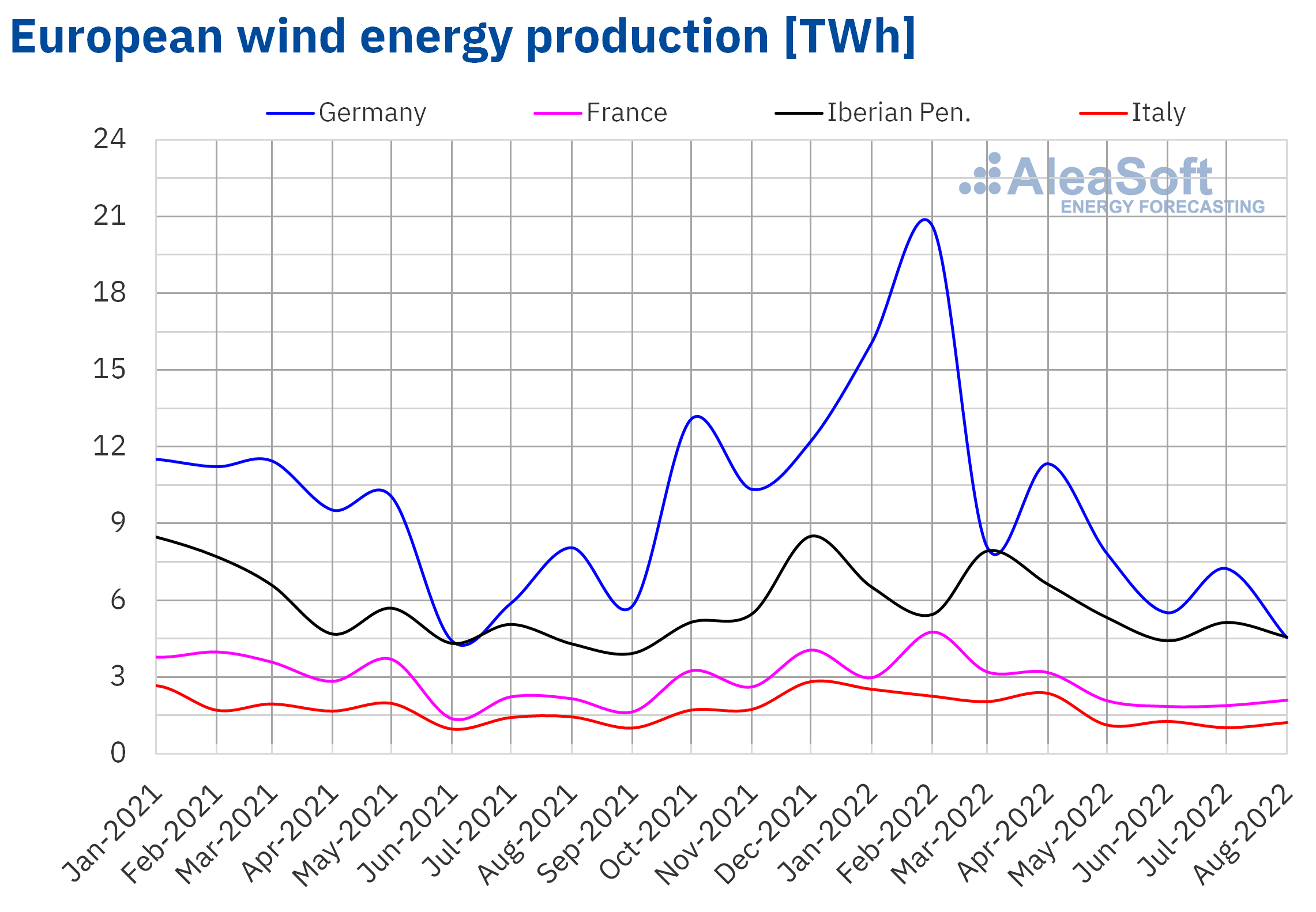 The electricity demand in August 2022 decreased in most European electricity markets compared to the same month of the previous year. The largest year‑on‑year decrease was registered in the Dutch market, which was 6.2%, followed by the 5.6% decrease of the British market. In the markets of Italy and Spain the decreases were 2.9% and 0.6% respectively. In the Belgian market, the demand was similar to that registered in August 2021, being 3.2 GWh lower. On the other hand, in the markets of Portugal, France and Germany, the demand behaved upwards, registering increases that were between 2.3% of Portugal and 1.4% of Germany.

As for the comparison with July 2022, in the month of August there were also drops in demand in most European markets. The largest decrease was registered in the Italian market, which was 17%, followed by the decreases of the markets of Portugal, Spain, France and Germany, of 8.4%, 6.8%, 5.8% and 2.8% respectively. On the contrary, in the markets of Belgium, the Netherlands and Great Britain, the demand increased in this period by 1.7%, 1.6% and 0.2% in each case. 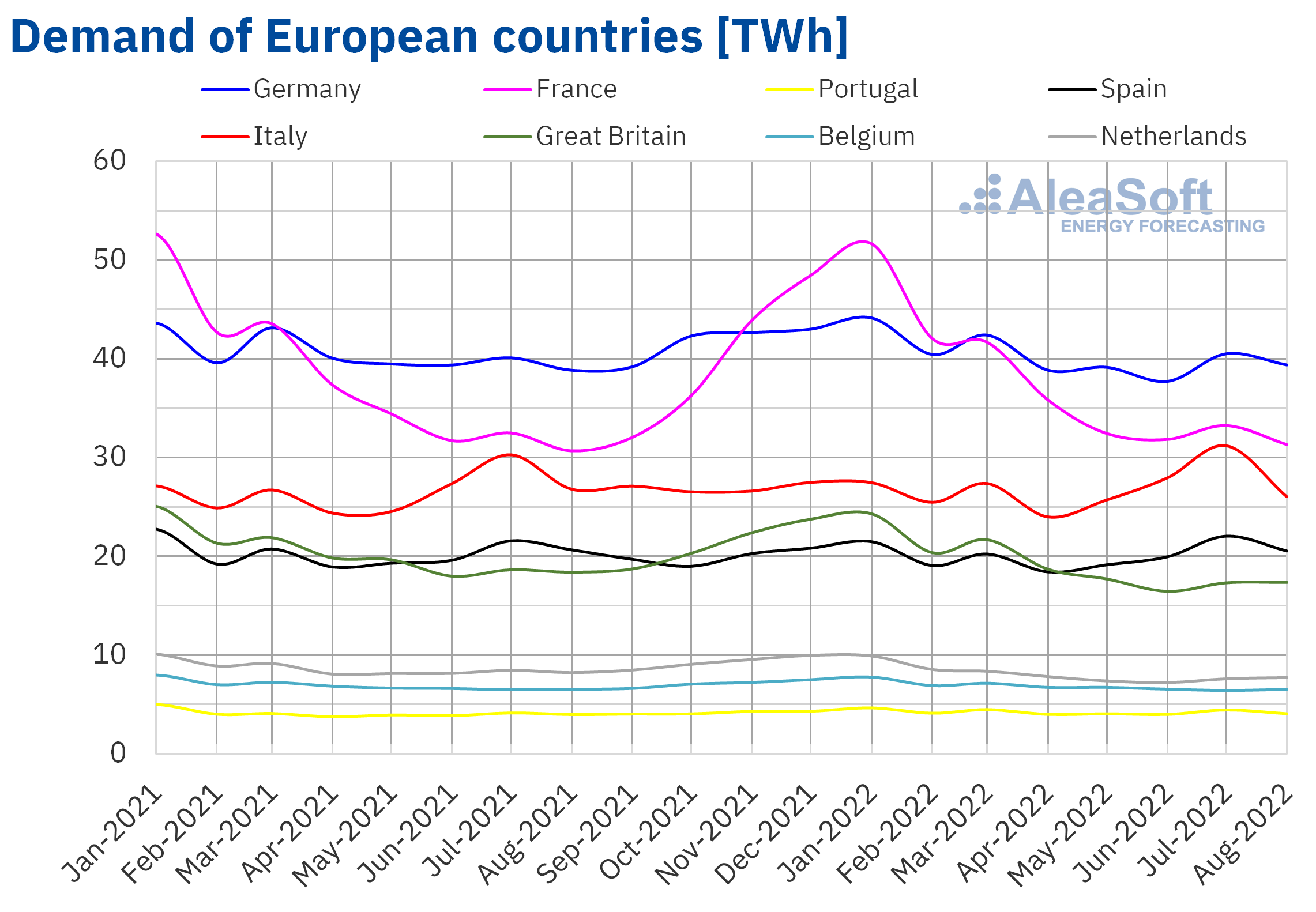 In the month of August 2022, the monthly average price was above €435/MWh in almost all European electricity markets analysed at AleaSoft Energy Forecasting. The exceptions were the MIBEL market of Spain and Portugal, in which since mid‑June of this year a cap has been applied to the gas price that is used as a reference in the sales offers, where €154.89/MWh and €157.27/MWh were averaged, respectively, and the Nord Pool market of the Nordic countries, with an average of €222.86/MWh. In contrast, the highest monthly average price, of €543.15/MWh, was that of the IPEX market of Italy, followed by that of the EPEX SPOT market of France, of €492.49/MWh. In the rest of the markets, the averages were between €437.82/MWh of the N2EX market of the United Kingdom and €465.18/MWh of the EPEX SPOT market of Germany.

Monthly prices registered in August were historical maximums in almost all analysed markets, except in Spain and Portugal, where the Iberian exception was applied. However, despite the fact that the MIBEL market prices were the lowest, part of the consumers paid a higher price as compensation for the gas price limitation applied in this market. In the Spanish market, the average of this price was €308.63/MWh in the month of August, which is also the highest value in history.

Compared to the month of July 2022, the highest rise, of 137%, was registered in the Nordic market, while the smallest increases were those of the Spanish and Portuguese markets, of 8.6% and 9.4% respectively. The rest of the markets had increases of between 23% of the French and Italian markets and 53% of the British market.

If the average prices of the month of August are compared with those registered in the same month of 2021, the lowest price increase was that of the Spanish market, of 46%, followed by that of the Portuguese market, of 48%. In the rest of the markets, the increases were between 241% of the Nord Pool market and 537% of the French market.

However, although monthly averages were high, in August negative hourly prices were reached in the markets of Belgium and the Netherlands. The lowest hourly price, of ‑€37.56/MWh, was the one registered in the Belgian market on Tuesday, August 2, between 14:00 and 15:00.

Gas prices in the month of August reached a historical maximum. This, together with higher CO2 emission rights prices, led to record prices reached in the European electricity markets. In addition, compared to the month of July, the solar energy production decreased in general and the wind energy production was lower in Germany and the Iberian Peninsula.

When comparing with August 2021, the decrease in demand in most markets and the general increase in solar energy production could not offset the effect of the significant rises in gas and CO2 emission rights prices, which were much higher than those of the same month of 2021. The decrease in wind energy production in almost all markets also contributed to the electricity markets prices increases. 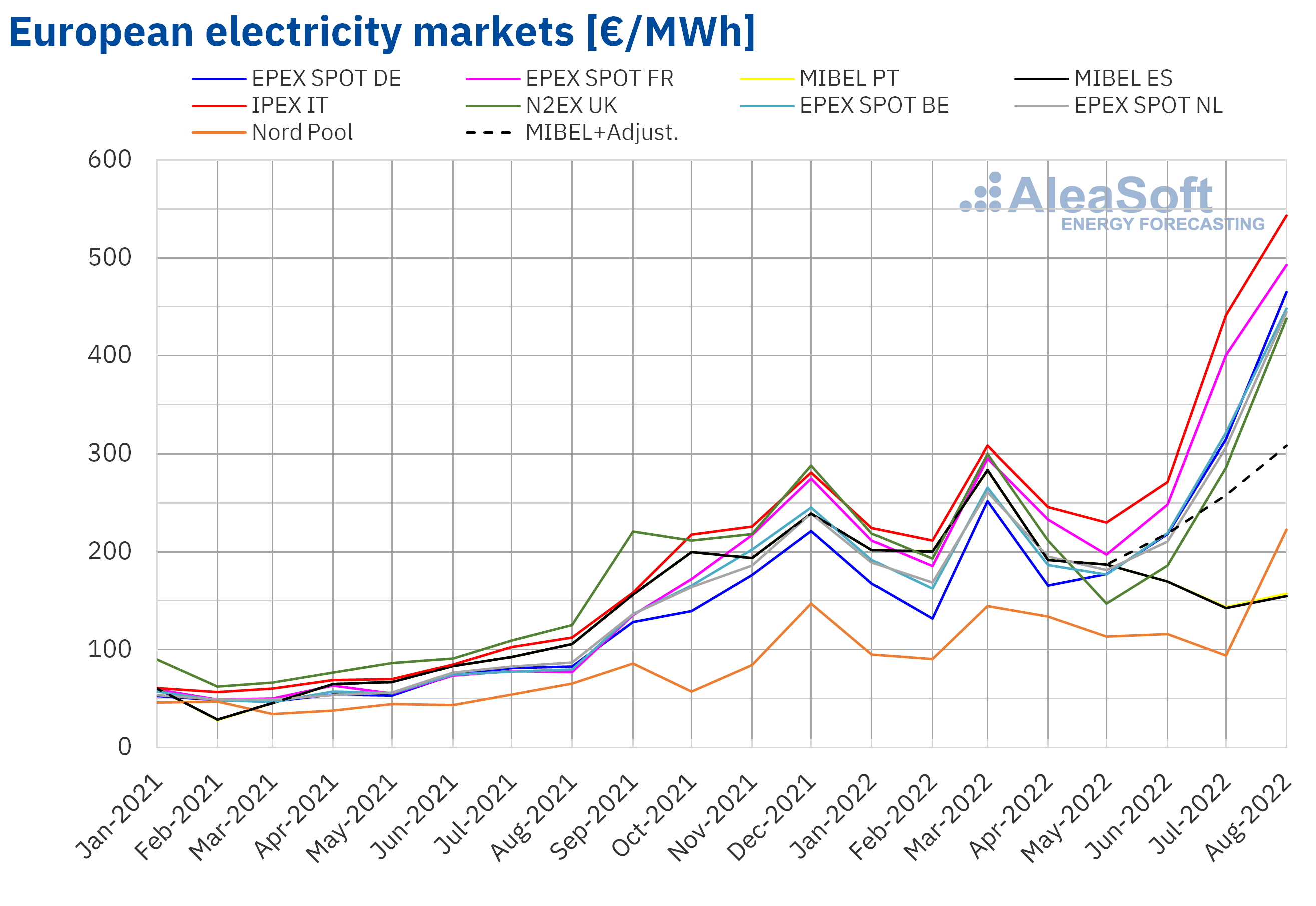 Electricity futures prices for the year 2023 had a predominantly upward behaviour during the recently concluded month of August. The EEX market of France even reached four figures, when on August 26 it registered a settlement price of €1130.00/MWh. In the European futures markets analysed at AleaSoft Energy Forecasting, historical maximums were reached on that date.

As usual, the region of the Nordic countries, both in the ICE market and in the NASDAQ market, remained during the month registering the lowest prices in Europe. Also in this period, the effect of the Iberian exception became more notable, as the prices of the OMIP market of Spain and Portugal positioned themselves as the second lowest of those analysed, a behaviour that has been taking place since it was announced that it would be carried out this measure.

In the last three sessions of the month, prices of all markets fell. This behaviour is largely motivated by the statements of Ursula von der Leyen, President of the European Commission, about a possible emergency intervention in the design of the market in the face of the appearance of exorbitant prices as a result of Russian pressure on gas supply. 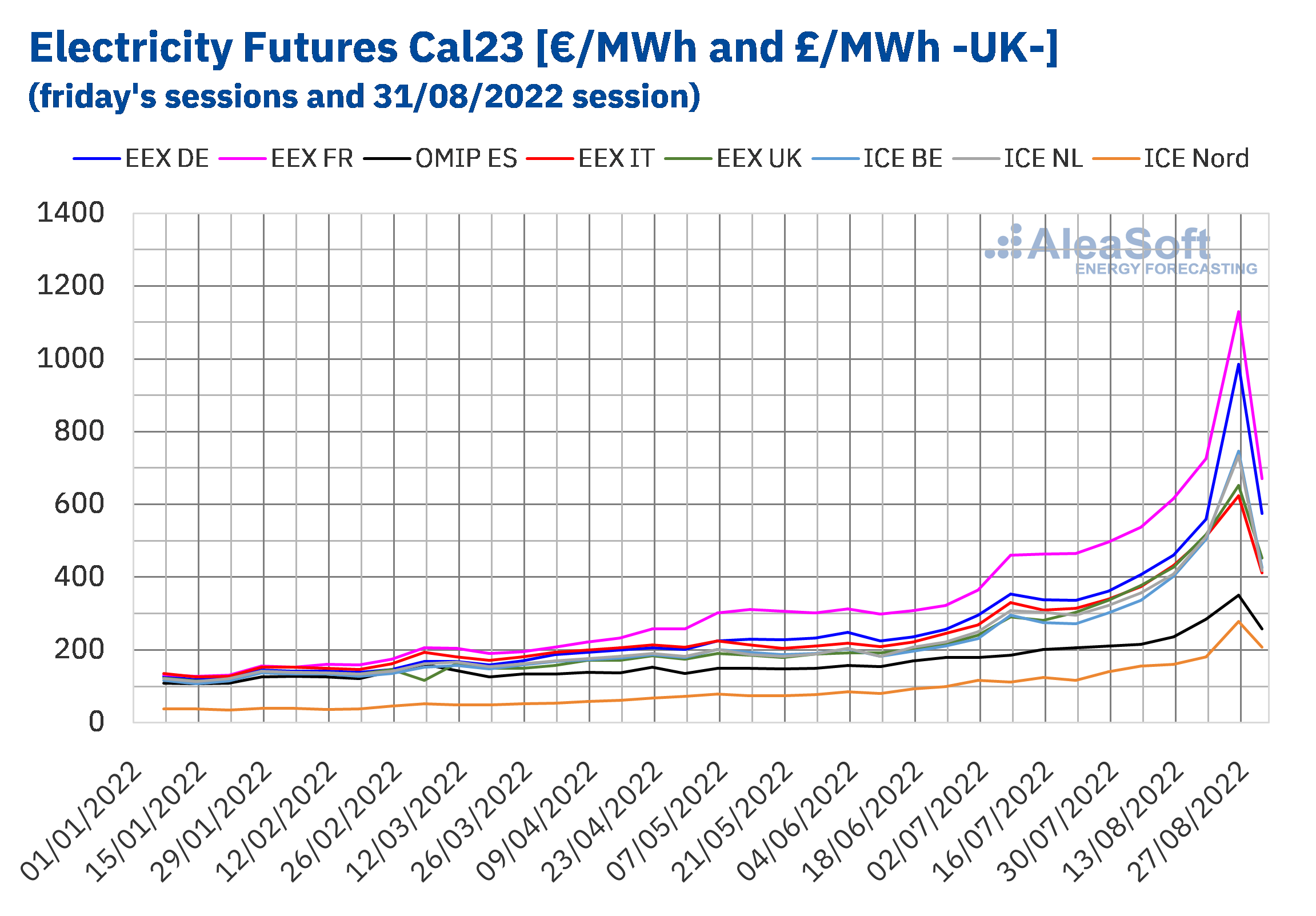 The fear of a possible global economic recession contributed to the monthly average price falling in August compared to the previous month. However, the announcement of measures to favour the economy in China and the prospects of a recovery in US demand exerted their upward influence towards the end of the month.

As for settlement prices of TTF gas futures in the ICE market for the Front‑Month, they maintained an upward trend for most of the month, with values above €200/MWh. The monthly maximum settlement price, of €339.20/MWh, was reached on August 26 and it was the highest in history.

During the month of August, the fear of further reductions in the supply of gas from Russia and the high demand in Europe to replenish reserves before winter led to the increase in gas futures prices. The maintenance work on the Norwegian continental shelf also contributed to the increases.

In the second half of the month, the announcement of a new interruption in the supply of gas from Russia through the Nord Stream 1 gas pipeline caused TTF gas futures to reach record prices. The interruption, due to maintenance work, began on August 31 and is planned to last three days.

Regarding CO2 emission rights futures in the EEX market for the reference contract of December 2022, in the month of August 2022 prices increased until reaching the monthly maximum settlement price, of 98.01 €/t, on August 19. This price was the highest in history. But, later, prices fell. The monthly minimum settlement price, of €80.03/t, was registered on Wednesday, August 31.

After a pause in August for the summer holidays, on September 15 the monthly webinars of AleaSoft Energy Forecasting and AleaGreen will resume. On this occasion there will be the participation of Jorge Simão, COO at OMIP and Pablo Villaplana, COO at OMIClear, who will analyse the importance of forward markets for the renewable energy development. Fernando Soto, Director‑General of AEGE, will also participate in the analysis table of the Spanish version of the webinar to talk about the auction of renewable energy PPA with electro‑intensive consumers that the association that he presides over is organising. The October edition of the webinars is also being organised, to be held on the 20th, and in which, for the third consecutive year, speakers from Deloitte will participate, Carlos Milans del Bosch, Partner of Financial Advisory, and Luis Garcia Tasich, Manager of Global IFRS and Offerings Services, who will share their vision on the renewable energy projects financing and the importance of the energy markets prices forecasting in audits and portfolio valuation. As usual, Oriol Saltó i Bauzà, Associate Partner at AleaGreen and Antonio Delgado Rigal, CEO of AleaSoft Energy Forecasting will participate in both editions of the webinars.

The short‑ and mid‑term forecasting of prices, demand, wind and solar energy production is necessary in control centres where energy is managed and sales offers are generated. Moreover, the long‑term price forecasting is a must for PPA or the investment analysis. On October 8, AleaSoft Energy Forecasting celebrates 23 years since its foundation, in which it has accumulated extensive experience working in the Control Centres of the most important Utilities in Europe.