ANALYSIS OF THE SPANISH ELECTRICITY MARKET DURING 2017

January 5th, 2018.‑ The Spanish wholesale electricity market operated by OMIE ended 2017 as the most expensive year since 2008 with an average price of 52.24 €/MWh, 12.57 €/MWh higher than 2016. There are three key factors that explain this increase of the price: on one hand, there is the increase of the electricity demand by 1.1%, making this the third consecutive year with an increase of the demand.

On the other hand, the fall of the production from renewable sources, led by the hydroelectric production, that produced electricity with the reservoirs at historical minimums levels. But also with the wind energy that had a first half of the year historically low, with a production similar to the one of the first half of 2012, when the installed wind power was still increasing.

According to data published by REE (Red Eléctrica de España), the electricity demand in mainland Spain in 2017 increased 1.1% compared to 2016. Once the effects of temperature and working patterns are corrected, provisional data from REE suggest that the increase could be around 1.6%, because the warner temperatures registered between February and April, around 1.0°C higher than in 2016, moderated the increase of the demand. The Spanish economy is expected to grow 3.1% in the year just completed. This data makes this year the third consecutive year with an increase of the demand.

January and June registered the largest monthly year-on-year demand increases, 7.6% and 7.2% respectively, mainly due to the temperature differences with the previous year: 3.1°C lower in January, and 2.1°C higher in June. 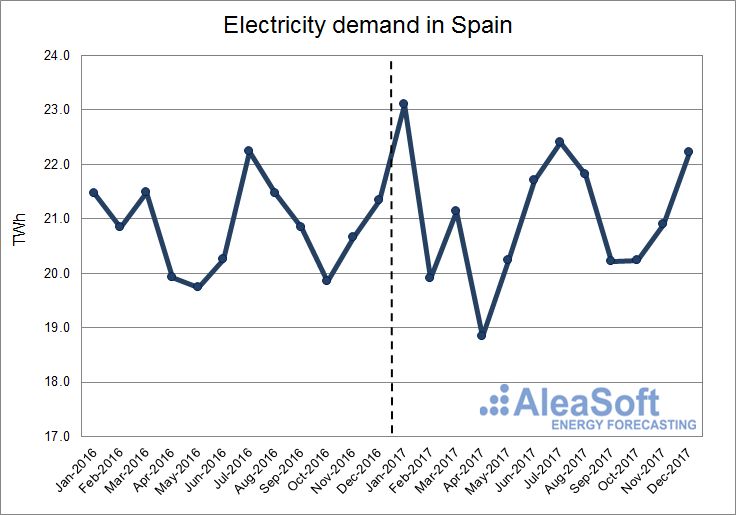 Wind energy production slightly increased by 0.2% in 2017. This increase was achieved thanks to the large increase of the production occurred in December, 114,7% year-on-year, while the trend in the first three quarters of the year was downwards compared to 2016. The very low wind energy production during most of 2017 was one of the key factors, together with the hydroelectric production, of the rise of the price in the wholesale market.

According to data published by REE, up to November, the wind power in mainland Spain decreased 47.1 MW in 2017. 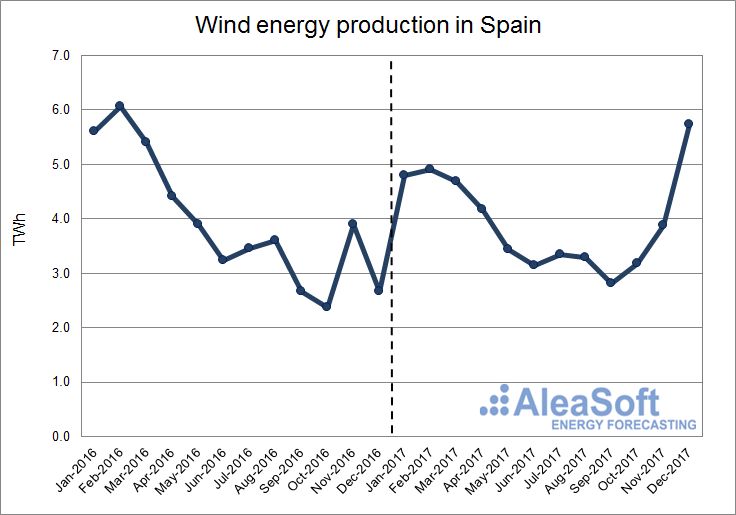 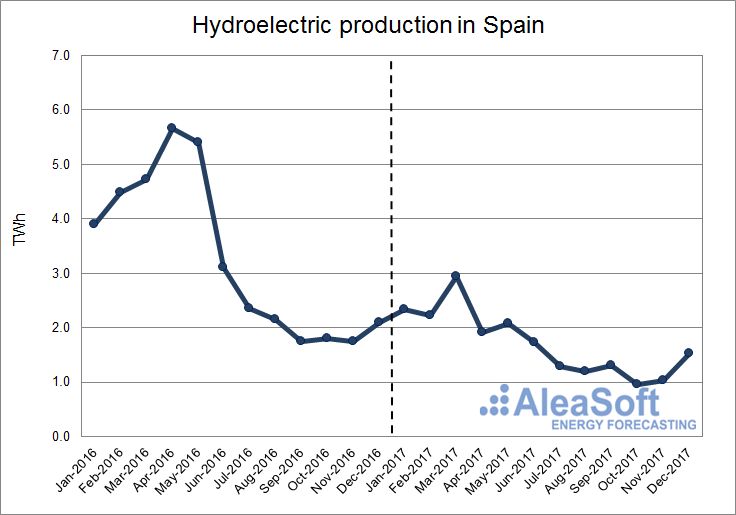 Nuclear production during 2017 slightly decreased by 0.9% compared to 2016. The nuclear power in Spain decreased 455 MW this year due to the permanent shutdown of the nuclear plant in Santa María de Garoña, although it was already not connected to the network since 2012. 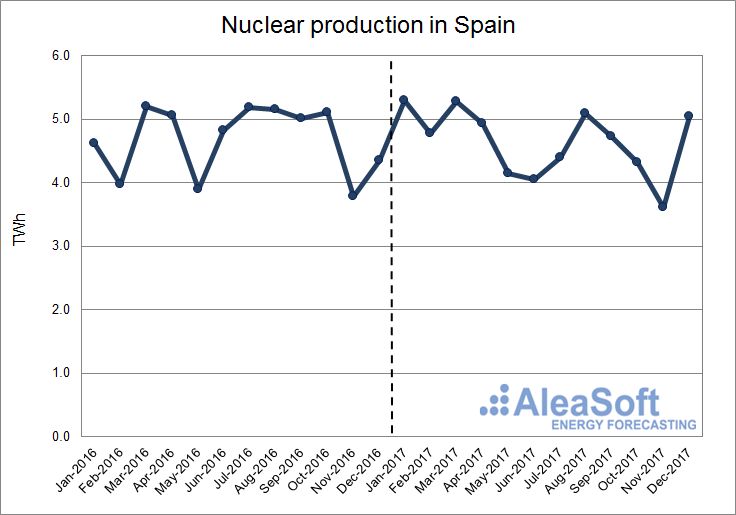 The generation of electricity using coal grew 21.1% in 2017. This year-on-year growth had two clearly different parts: during the first half of the year, the coal-fired plants had to fill the thermal gap left by the decrease of the production of the main renewable sources (hydroelectric and wind energy) and the increase of the electricity exports to France to meet the demand during the shutdown of several nuclear plants. During this first half of the year, the electricity production using coal increased 99.1% compared to the first half of 2016. 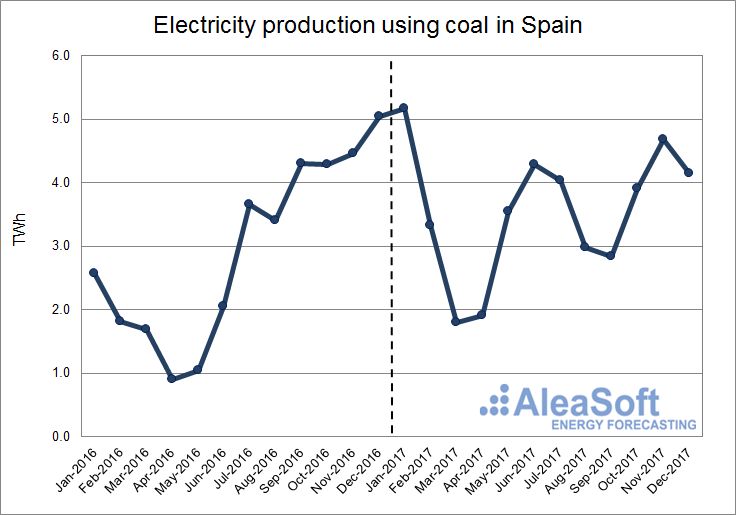 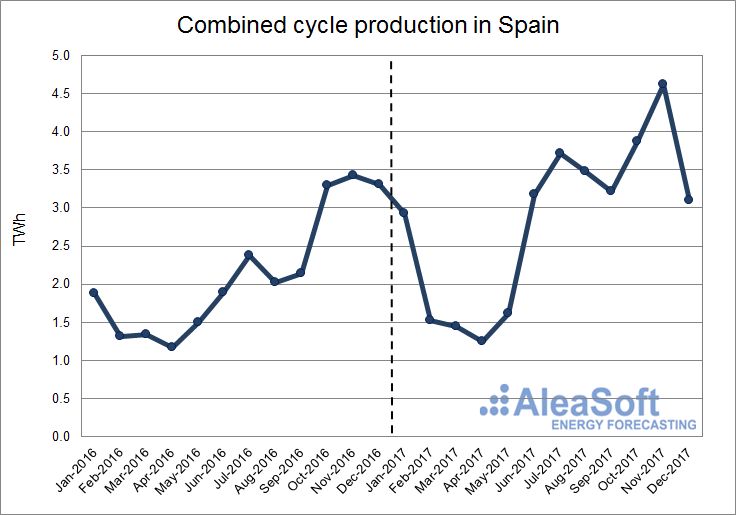 Solar photovoltaic production grew 4.8% in 2017. According to data published by REE, up to November, 2.8 MW of this technology were installed in mainland Spain in 2017. 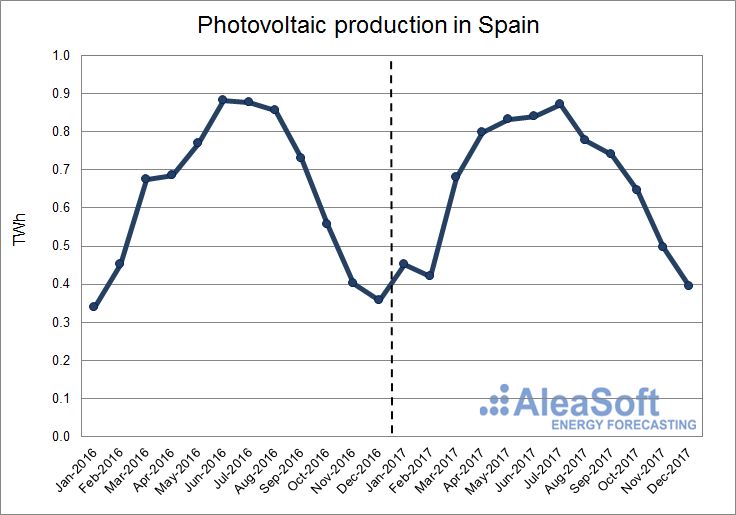 The solar thermal production also registered an increase of 5.9% in 2017. January stands out with a year-on-year increase of 149.0% of the production.

According to data published by REE, up to November, no MW of this technology were installed, and 2017 is already the fourth year in a row without a single MW of solar thermal power installed. 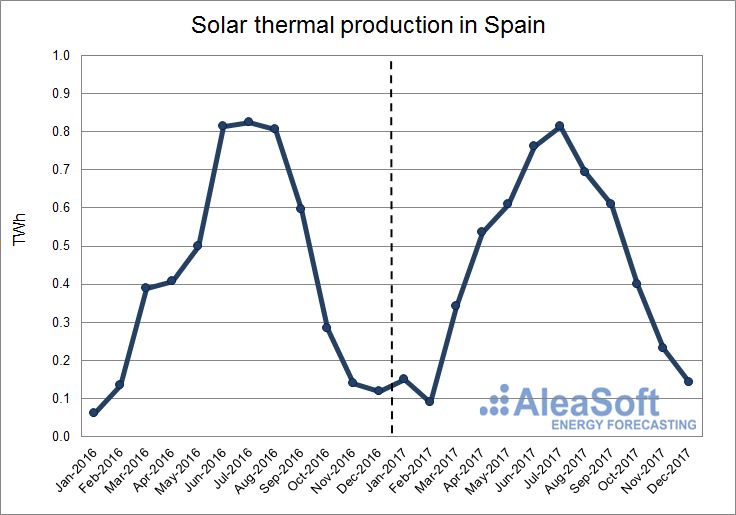 Other renewable technologies, including biogas, biomass, offshore hydroelectric and geothermal, increased their production 6.0% in 2017. This increase was favored by the year-on-year increase during the first half of the year, 10.2%, while in the second half of the year, it was only 2.5%.

According to data published by REE, until November, the net balance of installed power of these technologies during 2017 was ‑7.4 MW. 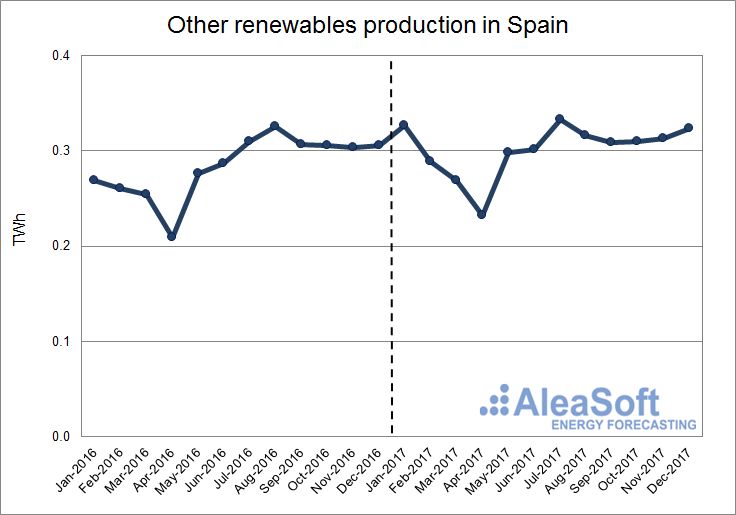 Cogeneration production showed an increase of 8.9% in 2017, although the installed power decreased 42.5 MW, according to provisional data published by REE until November. 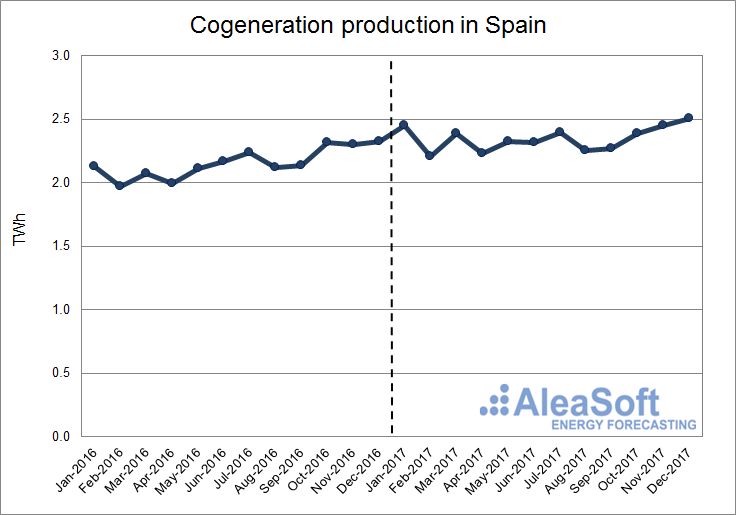 Production using waste increased 2.2% this year. The largest year-on-year increase of the production was registered in May, 30.1%, while the largest decrease was in June, -12.1%. 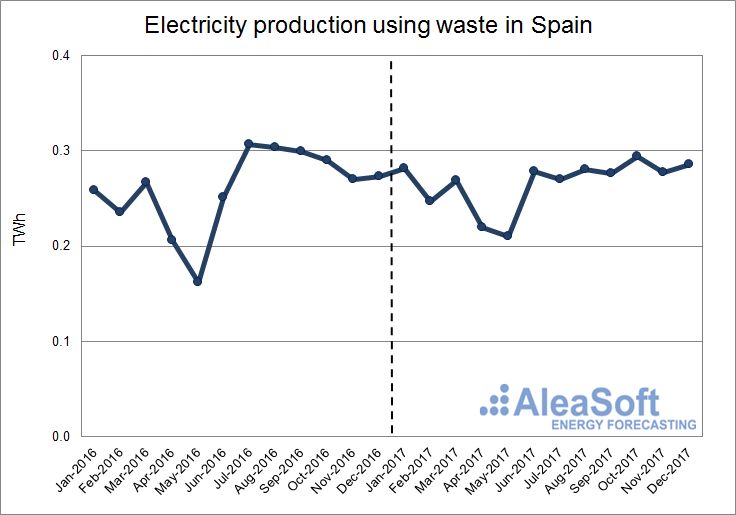 In general, the prices of the main fuels used in electricity generation increased in 2017, mainly during the second half of the year. All of them, Brent oil, CIF ARA coal and Zeebrugge gas, ended the year at higher prices than the end of 2016.

The price of the European coal CIF ARA, that started the year near 83 $/t, kept a slightly downwards trend during the first half of the year. The recovery started in the third quarter, and in December it reached an average price of 94.68 $/t. The average price of the ton of coal during 2017 was $83.49. 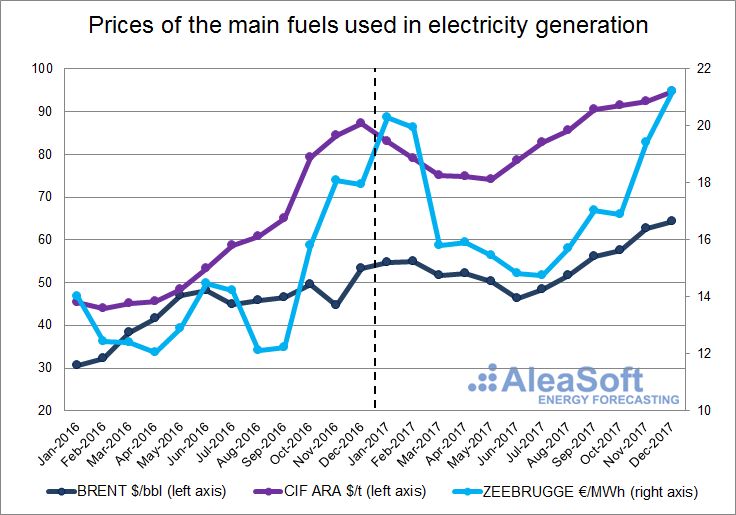 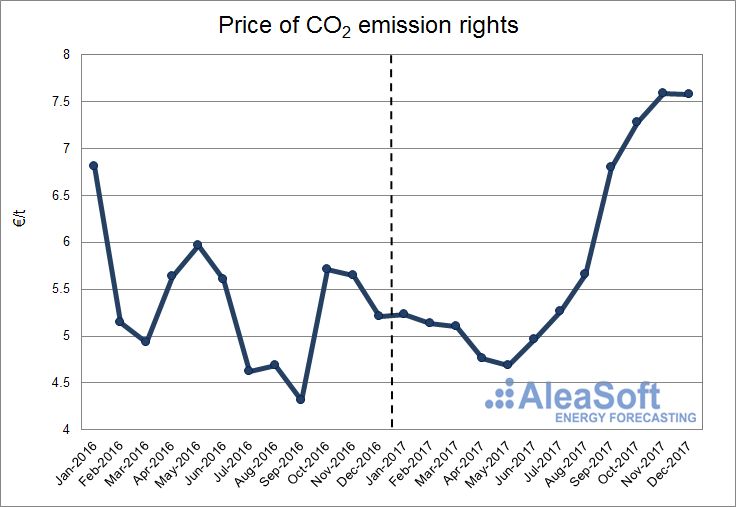 In all the months of the first three quarters of 2017, the net balance of electricity exchanges between Spain and Portugal placed Spain as a net importer with a balance of 3 134 GWh of electricity imported from Portugal. In the last quarter of the year, the trend was reversed and Spain exported more electricity to Portugal than it imported.

The global balance of the year was 2 625 GWh imported from Portugal. 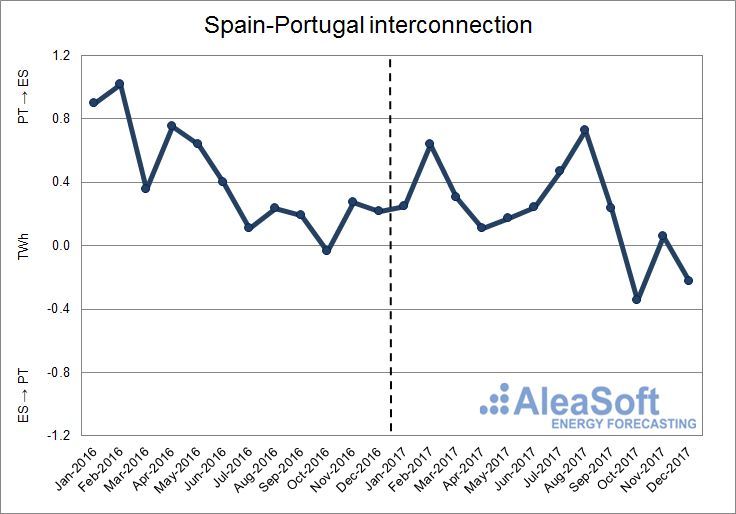 The net balance of electricity exchanges between Spain and France during 2017 placed Spain as a net importer with 12 278 GWh imported from France. January and November were the only months with an exporting balance for Spain, with 354 GWh and 46 GWh respectively, as the demand from France increased due to the shutdown of several of their nuclear power plants and the decrease of the temperatures. 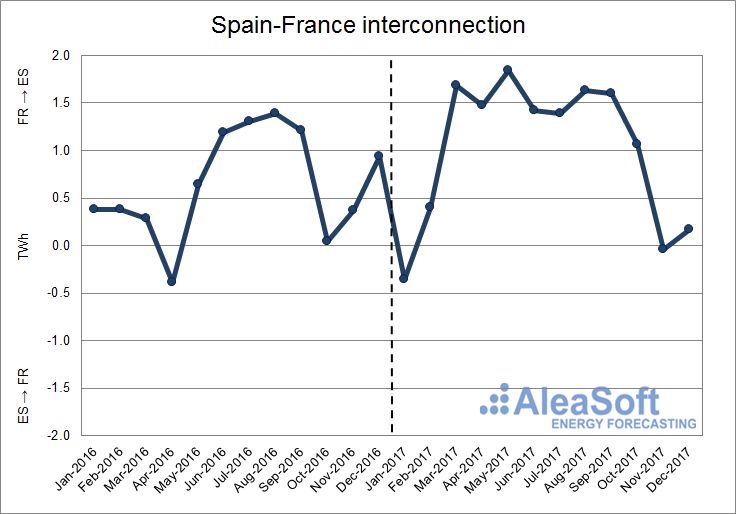 The average price of the day-ahead electricity market operated by OMIE in Spain in 2017 was 52.24 €/MWh, and places this year as the most expensive since 2008, when the market framework was quite different, with much less renewable power and the oil price much higher.

The lowest hourly price registered this year occurred in April 30th between 3pm and 5pm and was 2.30 €/MWh. On the other hand, the highest hourly price of the year was 101.99 €/MWh that was registered between 8pm and 9pm in January 25th in the midst of the French nuclear flu.

In all months of 2017, but December, the monthly average price was higher than the same month of 2016. The largest year-on-year differences were in January, 34.96 €/MWh more than January 2016, because of the increase of the production due to the electricity exports to France. 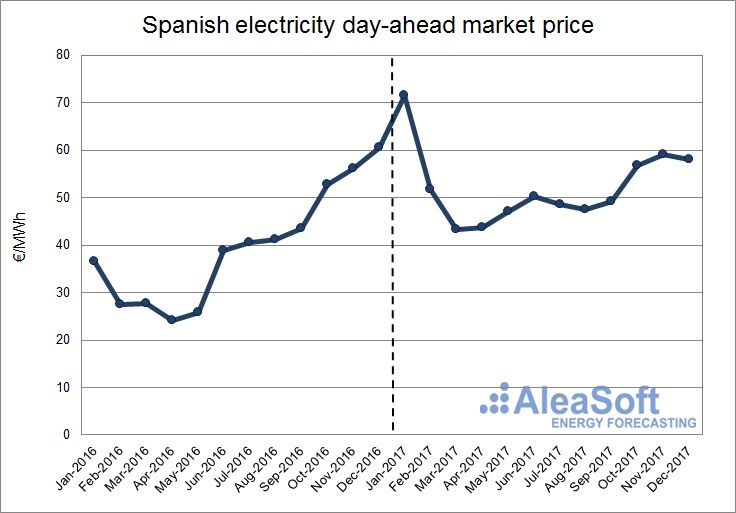 In the graphs showing the distribution of Spanish electricity market hourly price for each month of 2017, one can clearly see that, in most of the months, the prices are shifted towards higher values than in 2016. 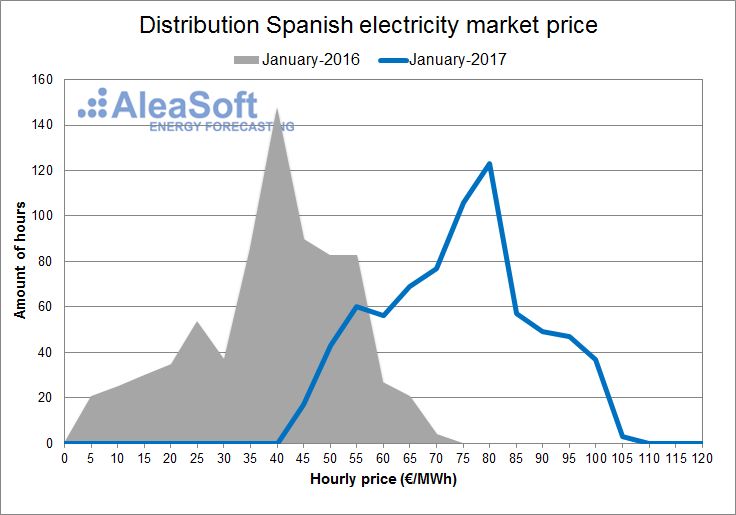 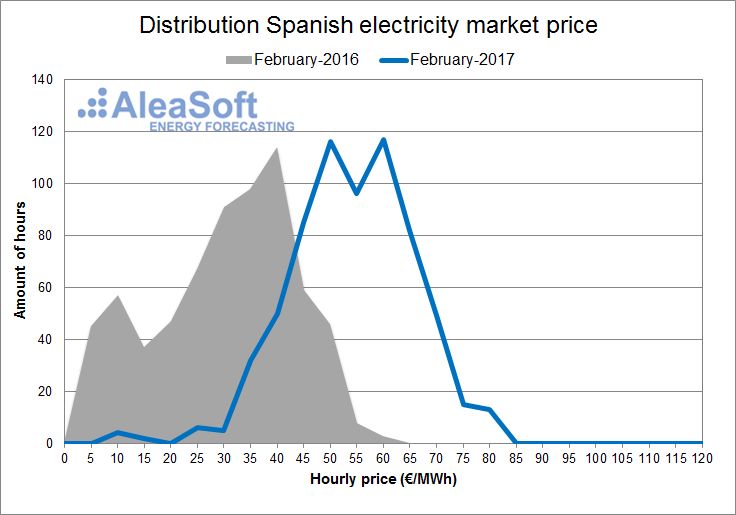 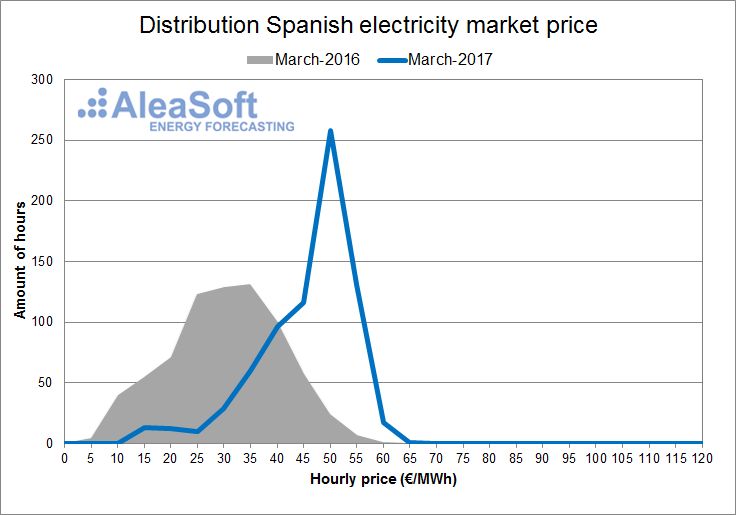 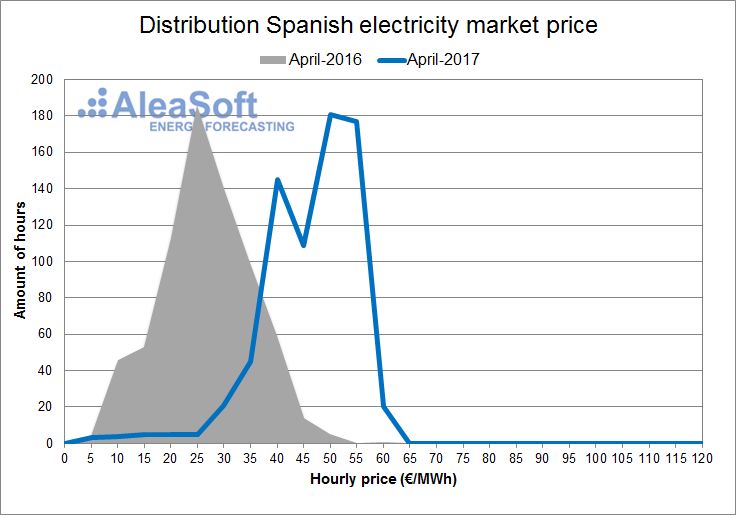 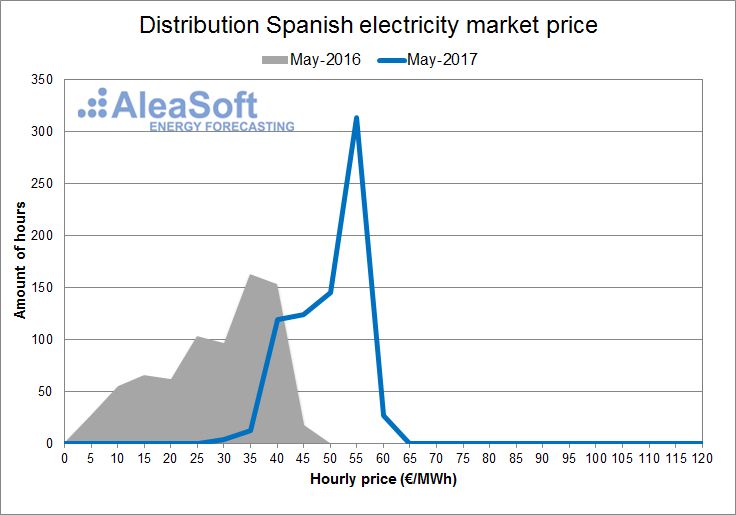 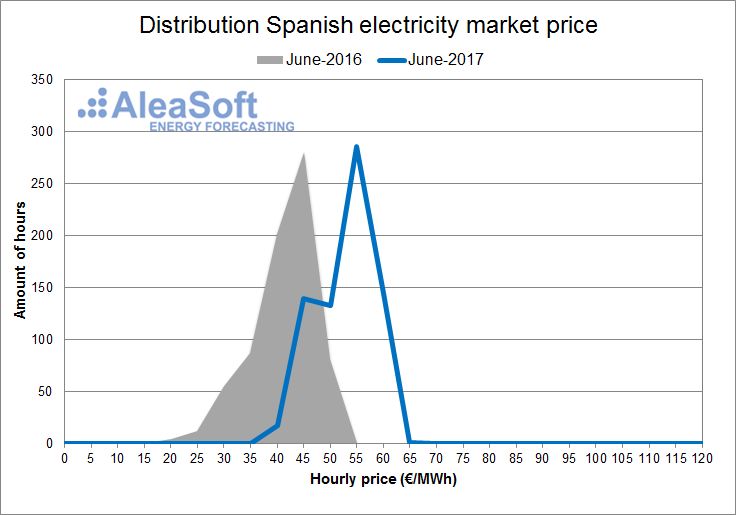 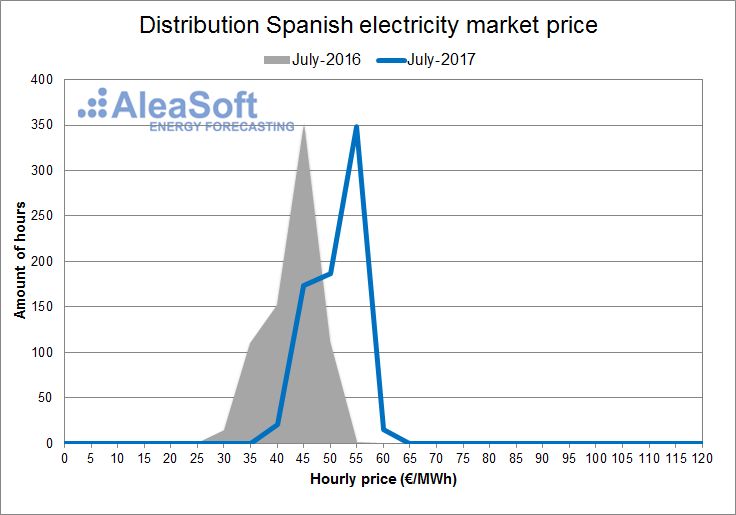 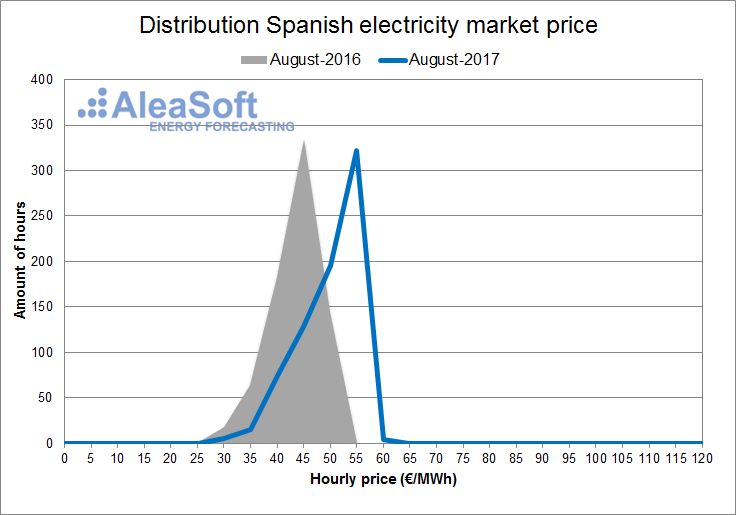 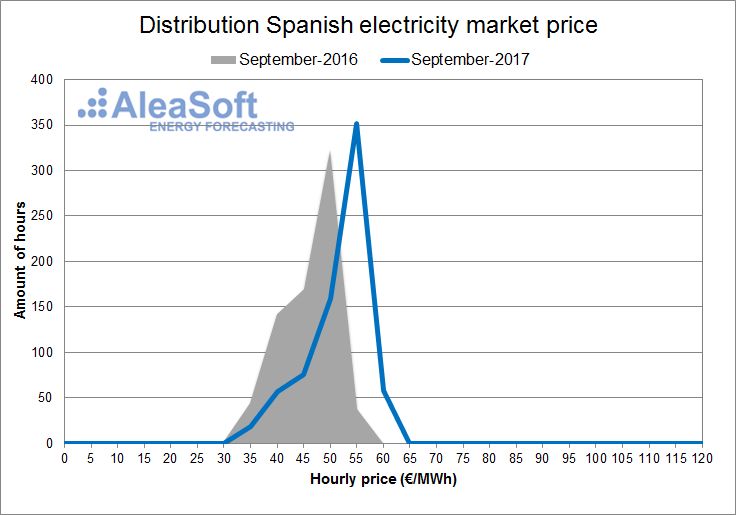 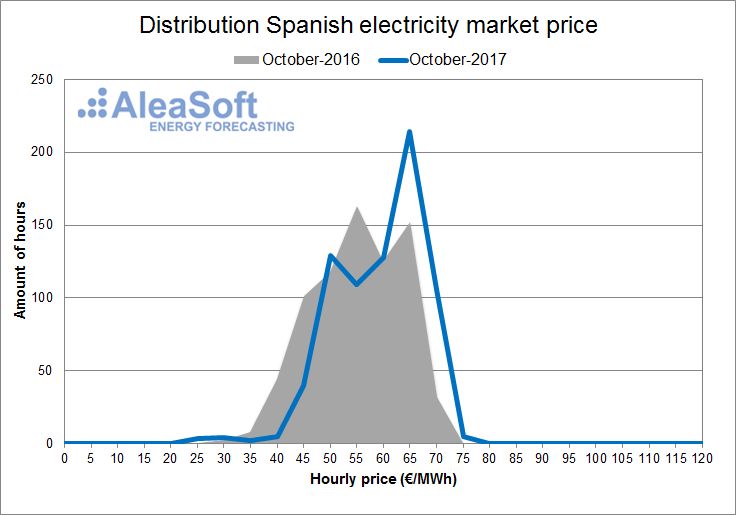 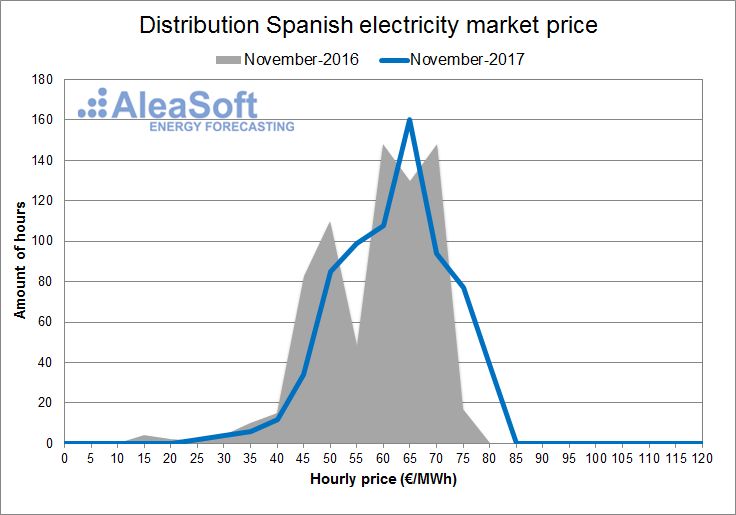 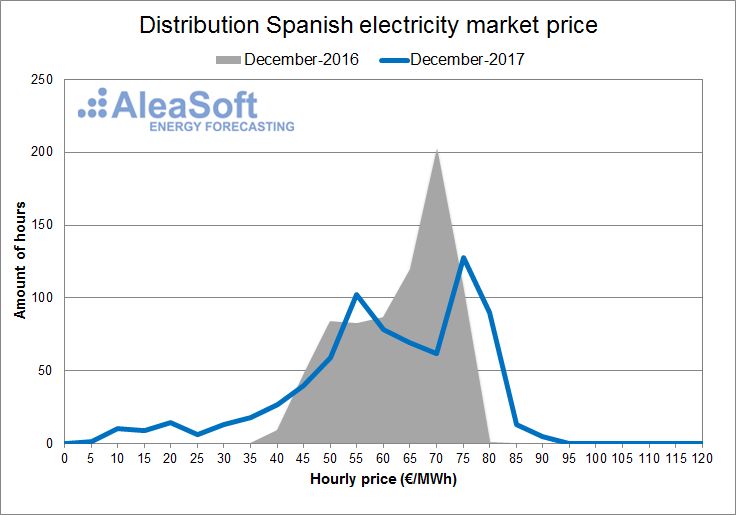 Distribution of the hourly price of the Spanish day-ahead market.
Data sources: OMIE. 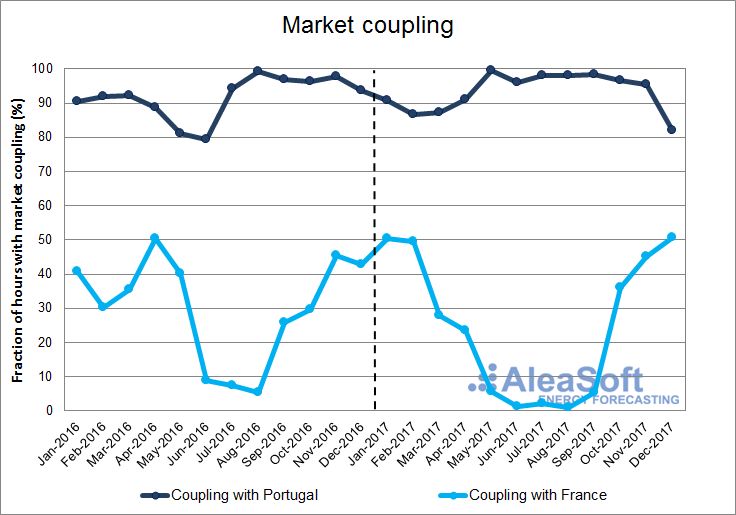 Evolution of the monthly fraction of hours with market coupling with Portugal and with France.
Data sources: Prepared by AleaSoft from data published by OMIE.