Assessment of Electricity Prices in Wester Europe for 2012

January 9, 2013.- Prices dynamics in European wholesale electricity markets during 2012 was dominated by the uncertain outlook on the evolution of economic activity in the euro zone. Although the prices of fuels used for electricity generation did not decrease in 2012 compared to 2011, the price of electricity in most of the leading European wholesale markets declined (MIBEL, Powernext, PHELIX and N2EX). Only in the case of IPEX market, the average price in 2012 increased over the previous year. 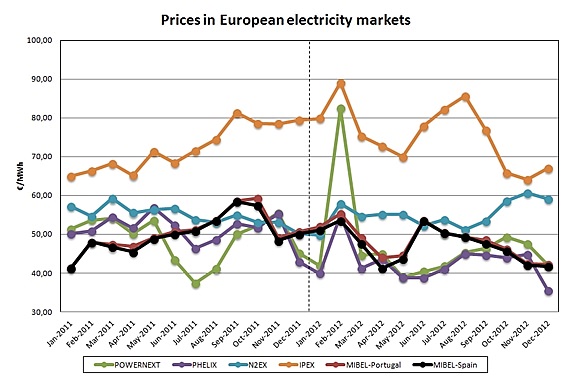 The most relevant fact in the evolution of the POWERNEXT prices in France is the price spikes that occurred during the month of February due to increased demand by the cold snap that covered the continent. For a few hours, the price of electricity exceeded 1,900 €/MWh. Even so, the average price in 2012 was down, and stood at 46.94 €/MWh, 1.96 €/MWh lower than in 2011.

Among the analyzed markets, only the Italian IPEX market has had an increase in prices during 2012. The annual average price was 75.48 €/MWh. This value represents an increase of 3.11 €/MWh from the average price in 2011.

AleaSoft forecast for MIBEL prices in Spain for 2013 is 52.51 €/MWh, according to current market conditions and new tax measures for electricity production. This price represents an increase of 5.27 €/MWh compared to the price recorded in 2012. Forecasts for MIBEL in Portugal are slightly higher, 52.56 €/MWh, 4.48 €/MWh more than the average price in 2012.

Contrary to what happens in MIBEL, we forecast a decrease in POWERNEXT average prices in 2013. The forecast for the French market is 45.08 €/MWh, which means a decrease of 1.85 €/MWh from the average price in 2012.

In the case of PHELIX market, we forecast an increase in prices in 2013. Forecasts indicate a price of 44.79 €/MWh, representing an increase of 2.19 €/MWh from the average price recorded in 2012.

Forecasts for 2013 in the Italian IPEX market indicate a decrease in the average price down to 68.20 €/MWh. With these projections, the Italian wholesale market would continue to be the most expensive of the analyzed markets, but the annual average price would decrease in 7.28 €/MWh compared to 2012.

The average price of the Brent oil barrel, the reference in Europe, stood at $111.73 for 2012, just $0.45 above the average price in 2011. Still, the price experienced significant fluctuations during the year with monthly averages between $95 and $125 per barrel. During the first quarter, the Brent barrel saw significant price increases due to the instability created by the sanctions on Iran exports and problems with imports of African oil. In the second quarter, the poor prospects of economic developments in Europe, the high production of OPEC countries and intervention announcements made by International Energy Agency led to a significant drop in the price of the barrel. During the second half of 2012, prices increased and stabilized around the 110 $/barrel.

The average prices in 2012 for NBP and Zeebrugge gas have been 20.30 £/MWh and 24.77 €/MWh, respectively. These prices represent a rise in gas prices compared to 2011, 2.14 €/MWh more for the Zeebrugge and 1.18 £/MWh more for the NBP. Both markets saw significant price increases in both the first and the fourth quarter, helped by the low temperatures on the continent and the British Isles.

The price of European coal CIF ARA has experienced significant declines in 2012. The average price for the entire year was 99.20 $/ton, representing 20.71 $/ton less than in 2011. The situation given by the mineral abundant supply, low domestic demand in Europe and the uncertain prospects of international importing powers, such as China, are among the main causes of the fall in price during 2012. 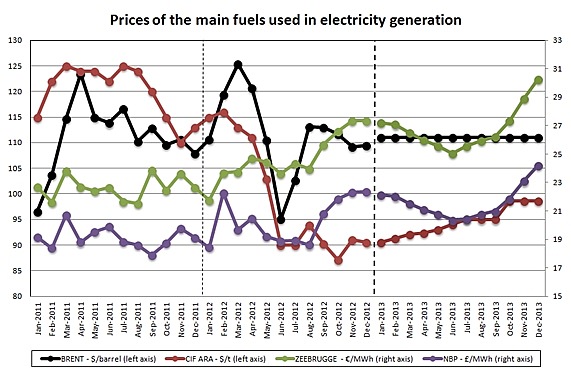 By 2013, we expect a stable Brent price near 111 $/barrel. As regards the price of gas, prices in Zeebrugge and NBP markets can continue to rise during 2013 to 30 €/MWh and 24 £/MWh, respectively, with seasonal variations. The price of European coal CIF ARA is expected to recover timidly up to the 100 $/ton, but far from the levels of 2011 and early 2012.

The average price in 2012 of the CO2 emission rights (EUA) was 7.49 €/ton, representing 5.70 €/ton less than in 2011. The prices in the market of emission rights in 2012 were the result of several tensions that kept the price relatively stable. These tensions are the volatility of the Brent price, the uncertainty on Phase III of the market and the poor prospects of the development of the economy. By 2013 it is expected a stable price of allowances around 9 €/ton. 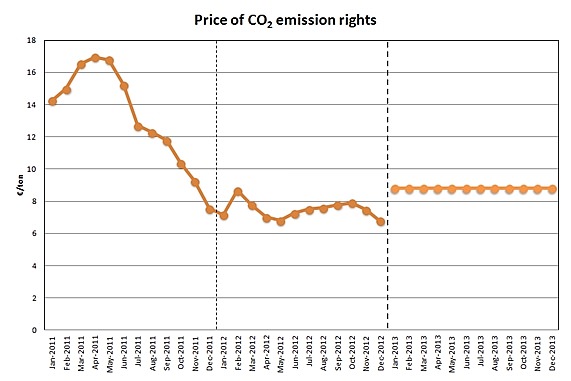