LONG-TERM ANALYSYS OF THE ELECTRICITY MARKET

AleaSoft, May 30th, 2018.- Last days prices at 60 euros/MWh due to a combination of fuels and CO2 emission rights high prices, low wind energy production, several nuclear plants shutdowns, not being in a period of drought, shows that prices in 2030 do not have to be low.

Spanish electricity market price for May 30th is an interesting case to analyze and project this situation into the future. Nearly all the hours in the valley registered prices above 60 euros/MWh. A combination of fuels and CO2 emission rights high prices, low wind energy production, several nuclear plants shutdowns, not being in a period of drought and not having a high electricity demand level, forces the thermal groups to enter the production mix and the matched market produces these high prices for a valley. 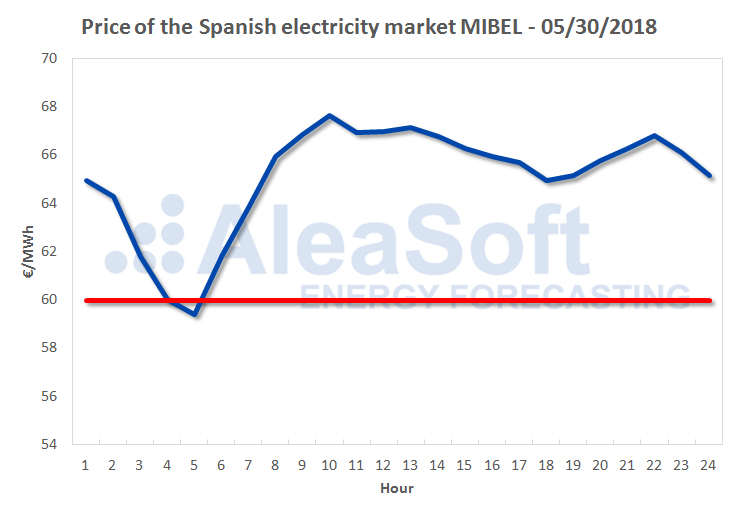 On May 4th, an opinion of Goldman Sachs appeared in the press. “The American bank estimates that, in 2030, 60% of electricity in Spain will come from renewables sources (wind as well as solar), which can reduce the average price of electricity in the country by up to 40% (down to 30 euros/MWh) “.

AleaSoft believes that, while the market uses a marginal price system, these low prices foreseen by Goldman Sachs are difficult to reach in a sustained manner, and the current situation is a sign that prices can be much higher.

An increase in renewable production will undoubtedly push prices down.

In the longer term, 2025-2030 and beyond, thermal production will be all generated with gas-fired combined cycles, except in Poland, and will take advantage of the hours that it generates to bid at high prices to make production profitable. Also the prices of fuels and CO2 emission rights are estimated to increase in the long term.

AleaSoft suggests that low prices at the long term are not sustainable, because they make the generation not profitable. Renewable energy plants also need the price not go to down too much, then, their strategy cannot be to bid at zero euros/MWh. The production from renewable sources will rise the floor price of their bids over time. In addition, a low price stimulates electricity consumption and it can displace gas in some industrial sectors and in heating systems.

If the increase in electricity production from renewable sources is mainly from photovoltaic plants, then it has a production pattern that is totally the opposite of the new consumption patterns, such as the electric car: the photovoltaic plants produce by day, and the cars begin to charge when people arrive home and the sun is already set. That could only be solved with batteries on a very large scale, a subject that, at the moment, is not viable due to their high cost. The large battery arrays installed in transmission networks right now (Australia and Belgium) are only used to keep the voltage and frequency in the network against sudden changes or blackouts, but they are not being used to store energy on a large scale to supply it later for a prolonged period of time.

AleaSoft estimates that, in the long term, with the shutdown of nuclear power plants, the dependence on thermal production from combined cycles will continue to be important to meet the demand when wind energy production will fall in the hours when there is no sun. We must bear in mind that Spain is, and will be even more, connected to France, a country with large consumption where nuclear production covers 75% of the total demand. France will turn from being a net exporter to being a large importer of electricity when these nuclear power plants shutdown.

In conclusion, AleaSoft proposes that Goldman Sachs should re-perform its calculations about the future taking into account what is happening at present. What would happen in the future with a Brent above $120 a barrel, high CO2 emission rights prices, prolonged periods of drought, very high electricity demand and low wind energy production?