NEW RECORD IN THE SPANISH ELECTRIC MARKET, THE MOST EXPENSIVE OF DECADE

AleaSoft, August 2, 2018. After records registered in the monthly prices for the months of May and June in the Spanish and Portuguese electric market MIBEL, a new record was now obtained for the month of July, the most expensive since 2008. The AleaSoft analyses point to the fuels and CO2 emissions expensive prices together with low wind energy production, as the main factors.

Based on AleaSoft’s data analysis for the month of July, the European markets increased their price over the course of the month. The most expensive, UK, Spain, Portugal and Italy, from 60 to 65 €/MWh and in the case of the less expensive, France, Germany and Nord Pool, the increase varied from 40 to 55 €/MWh. The cause was the high price of fuels and CO2 emissions rights and the low wind energy production taking into account that in these European countries the electricity demand remained stable, being 30,000 MWh the average daily value for Spain in the month of July. 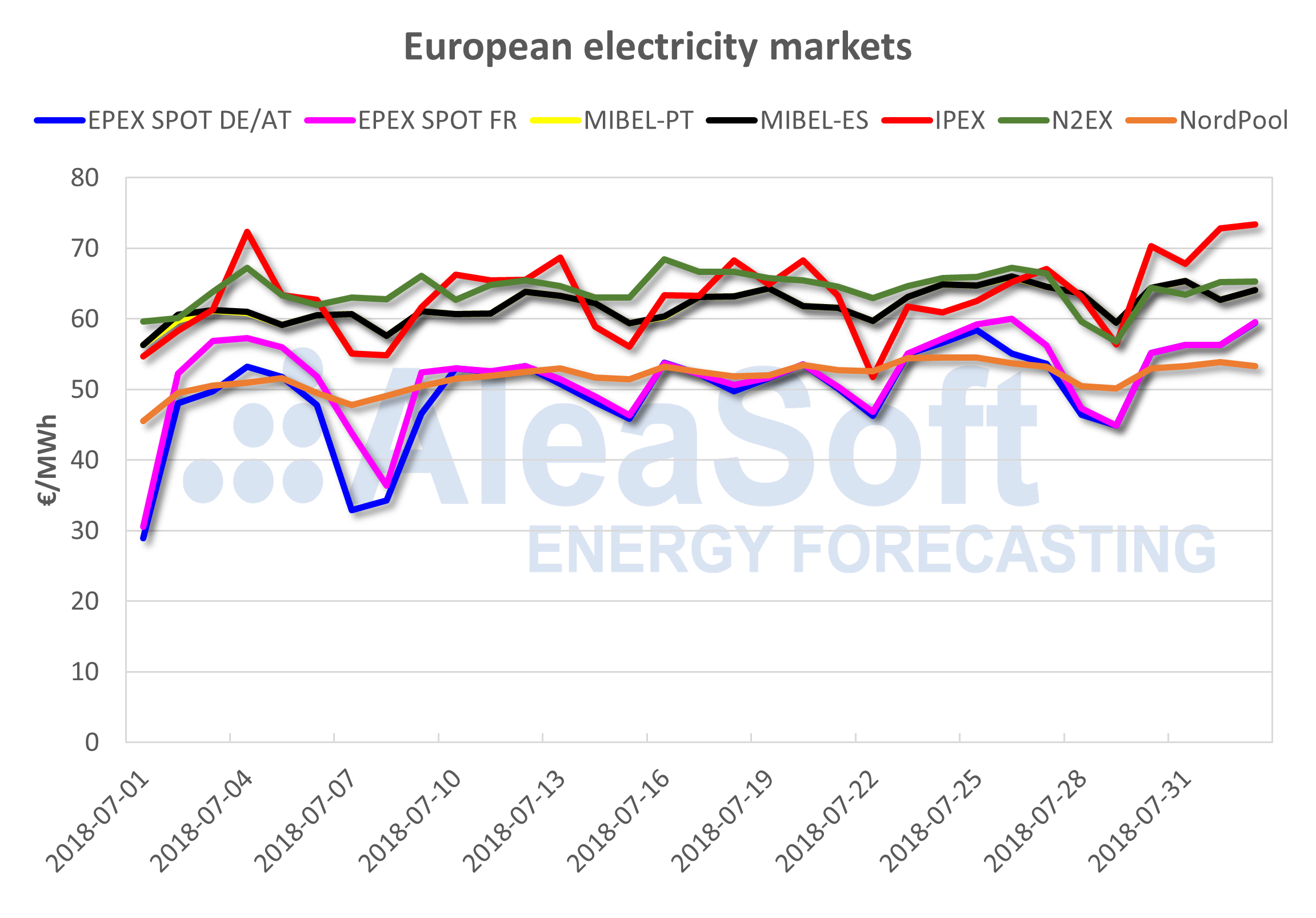 With respect to AleaSoft’s analysis of fuels, Brent oil price remained stable since mid-July moving in a range between $71 and $74 a barrel. Compared to the values of $80 a barrel in mid-May, a slight downward trend is observed. Rumors of a possible meeting between President Trump and Iran government, together with a production increase by Saudi Arabia and Russia, may lead to the price being relaxed in the coming weeks. The exchange rate between USD and EUR has remained stable during this month of July around $1.17 per euro.

CO2 emissions rights remained high, touching the maximum of 17.4 €/t, following the upward trend that began in April of 2018 when values were around 5 €/t.

API 2 coal short-term futures prices dropped from $102 a ton on July 11, to $95 a ton in recent days. Since April they have had an unstoppable recovery from $78 per ton.

Gas futures for Q4 in OMIP market have been with a stationary trend around 26 €/MWh during the month of July.

This situation of high prices is ideal for generators, from large to small, to make bilateral contracts or sales in futures markets in the mid-term, with a horizon between one and three years, because this situation can be reversed if Fuel prices begin to fall in the short or medium term. On the other hand, the large consumers who did not foresee that price could rise, either because they had a comfortable contract that expires soon, or because they always go to market, will have a complicated situation.