AleaSoft, April 23, 2019. AleaSoft analyses the prices of the fuels, CO2 emission rights and electricity markets that fell in Europe in the last week. Increases in temperatures and lower labour in the Holy Week made the demand drop as every year on these dates. A high wind energy production during the week also helped the electricity prices to drop.

Brent oil futures prices for June 2019 in the ICE market continue to rise uninterruptedly, recording a significant jump from Friday, April 19, with 71.97 $/bbl to Monday 22 with 74.04 $/bbl, breaking the barrier of 74 $/bbl. Following this trend, it seems close to surpassing the 75 $/bbl that AleaSoft predicted last week. In less than four months the rise was of more than 20 $/bbl, which represents more than a 40% increase. Recent news about the possible end of sanctions waivers on Iran’s oil imports in early May is pushing the futures prices up by around 0.5%.

In the third week of this month, the futures of TTF gas in the ICE market for May settled on Friday 19 at 14.46 €/MWh, continuing a slight decrease that already lasts two weeks. At the beginning of the month, on April 2, they reached 13.46 €/MWh, an unprecedented minimum price in the last two years, increasing from this value until reaching 16.63 €/MWh on April 5, one of the highest values of the month. As we have stated in AleaSoft on other occasions, the events in Algeria and Libya may cause the flow of gas to Europe to fail, leading to higher prices.

The prices of gas and coal in Europe have followed very similar paths for about two years. The prices decreases of recent months were due to the mild winter temperatures, which led to lower electricity consumption.

The rise in the price of CO2 emission rights futures continues to be the most relevant news in Europe. For the reference contract of December 2019 in the EEX market, the price reached 27.45 €/t on Wednesday, April 17, which is the highest price reached in the historical series of this market. When settled on Thursday, the price relaxed a little, dropping to 26.88 €/t. Once the effect of the extension of the Brexit until October has passed, which brought a price rise of 25% in April, it is possible that the prices of CO2 emission may continue to fall until reaching 25 €/t. 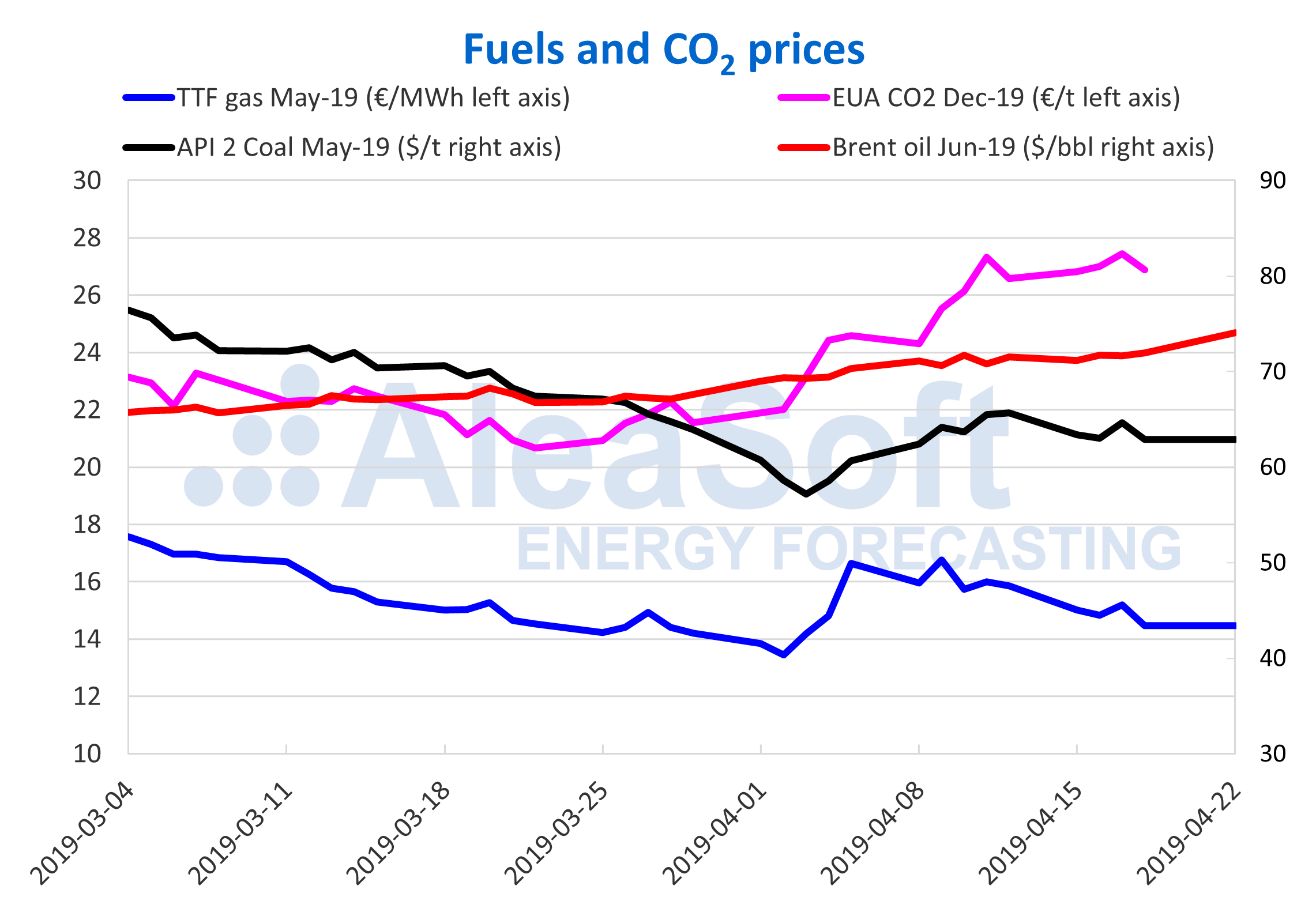 In the third week of April, coinciding with the Holy Week, the electricity prices had a significant and widespread decline in the main European markets, of around 9%. The causes were an average increase in temperatures of 4 °C and the fall of labour during the Holy Week, which brought the corresponding drop in electricity consumption between 6% and 7% on average in the main markets. It was also influenced by a higher wind energy production in Europe and a fall in the prices of gas and coal.

Since the beginning of April, two groups of prices were observed, some higher and others lower. In this last week, the highest prices continued only in the N2EX market of Great Britain, which remained above 49 €/MWh. The Italian IPEX market and the MIBEL market of Spain and Portugal lowered their prices to reach the lowest group, with their prices close to 40 €/MWh on Monday 22 as the Nord Pool market of the Nordic countries.

The rest of the EPEX SPOT markets of Belgium, the Netherlands, France and Germany had average prices of 39 €/MWh last week and were above 30 €/MWh at all times. Yesterday, Monday 22, the hourly prices fell to negative values ​​in the markets of Germany, France and Belgium. The low demand for the Easter holidays and the high wind energy production pushed the prices below zero €/MWh for several hours. In the German market, the negative prices were registered for ten hours on Monday, reaching ‑83.01 €/MWh at hour 15 and dragging the daily average price below zero, down to ‑14.01 €/MWh. In Germany, negative prices were also registered for Tuesday 23, although in this case they only reached ‑11.03 €/MWh.

In the French market, two hours with a negative price were recorded on Monday, with a minimum value of -4.10 €/MWh. For Belgium the values ​​were somewhat more severe, with six consecutive hours with negative prices, reaching -31.62 €/MWh. For both, the French and the Belgian markets, the average daily prices for Monday remained positive.

The European electricity futures for May 2019 ended last week, on Thursday, April 18, with a slight decline for most markets in parallel to the fall in the prices of gas and coal. In general, between Friday, April 12 and Thursday 18, the decrease was between 0.3% and 3.2%. The exception were the UK ICE market that fell 5.9%, the German EEX market that settled on Thursday 18 at the same price it did on Friday 12 of the previous week, and the MTE market operated by GME that rose by 1.1%.

For the current week, significant increases in wind energy production are forecasted for Germany, France and Italy and more moderated for the Iberian Peninsula. 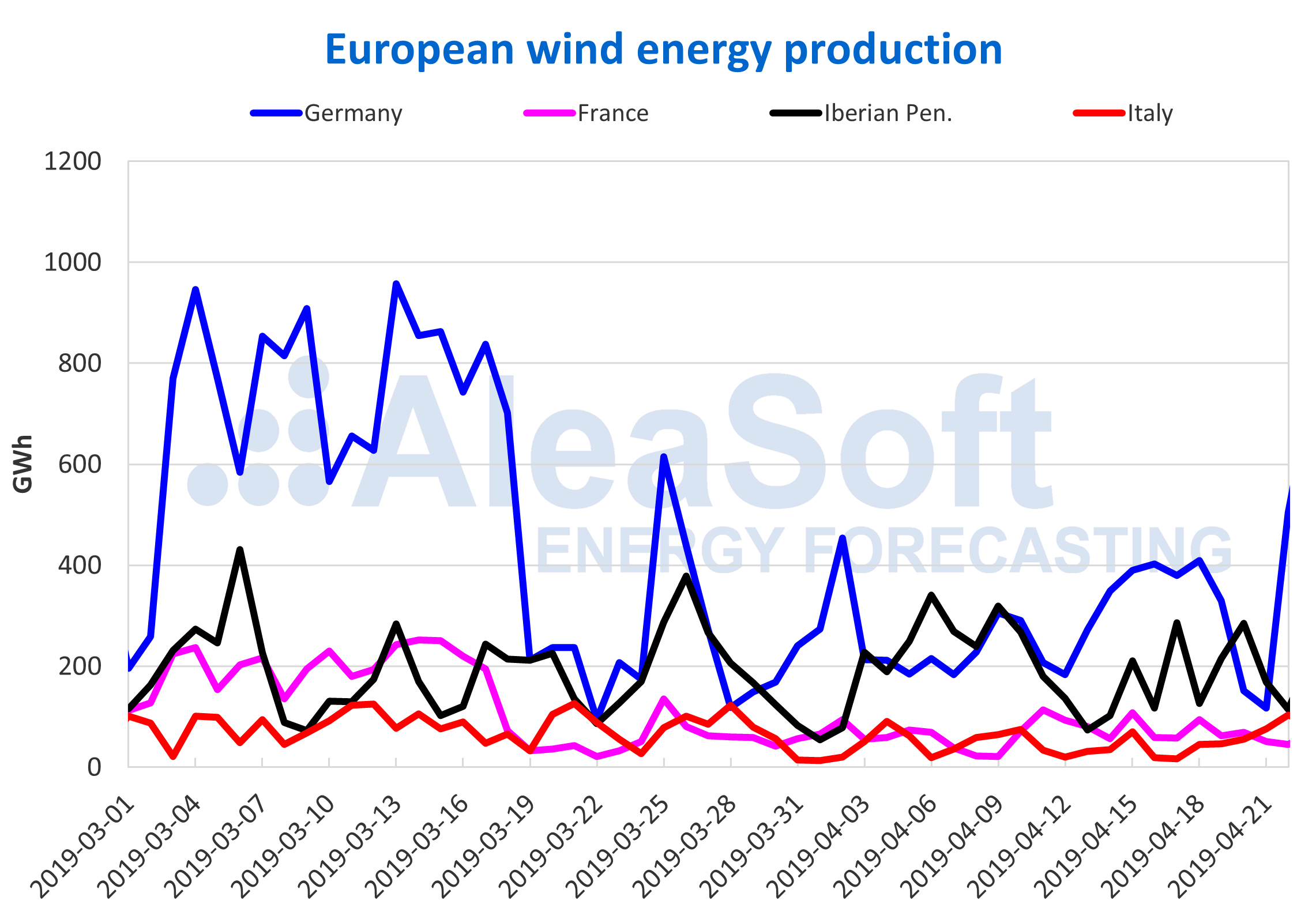 For the current week, the forecasts change the trend and show an increase in Spain and a decrease in Germany and Italy. 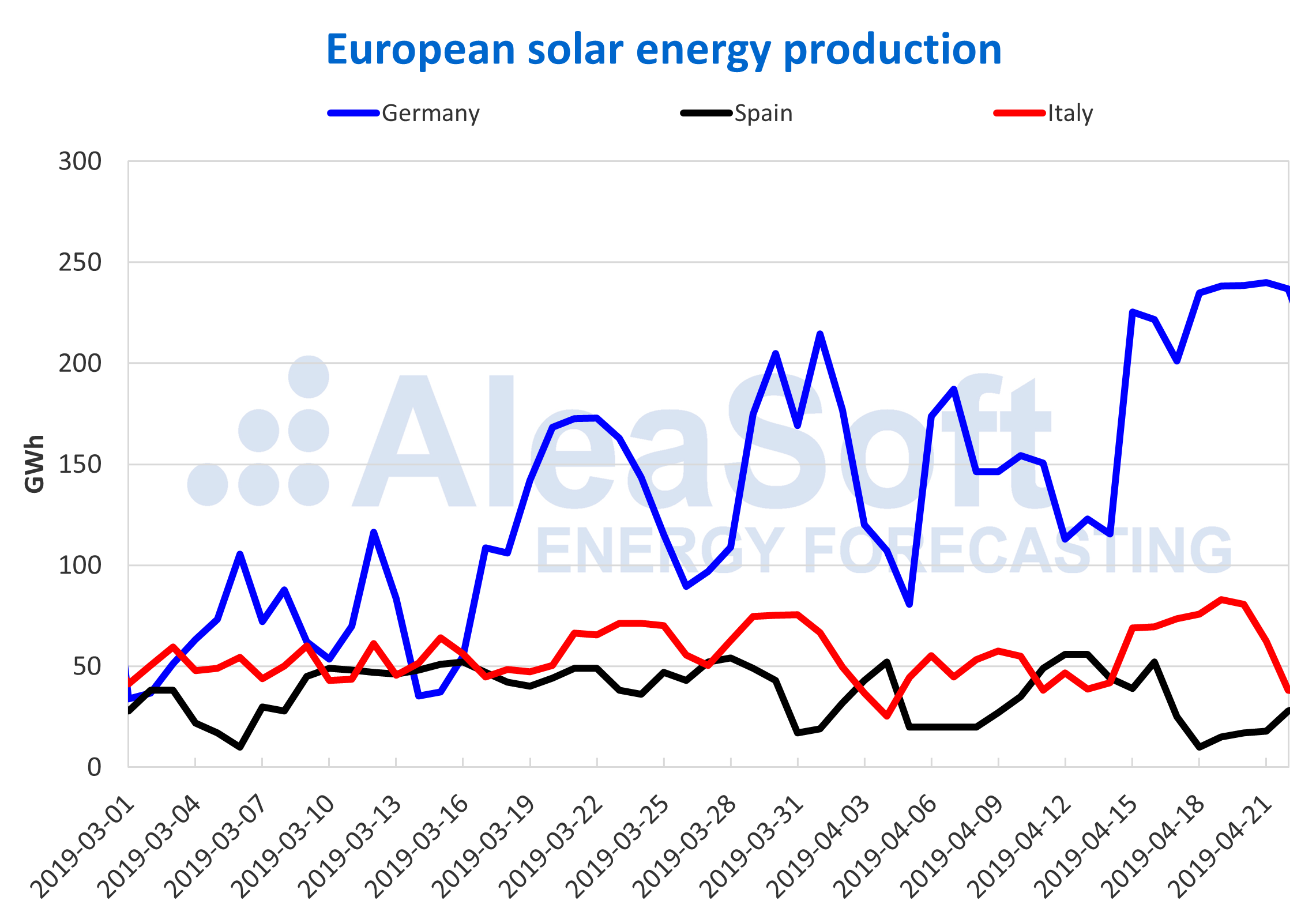