AleaSoft, September 6, 2018. At the beginning of September, several price records have been broken in the main European electricity markets. Specifically, on September 5, the maximum daily average price of 2018 and the maximum daily average price for a September of the last decade were recorded in several markets. AleaSoft considers that the main causes for these high prices in electricity markets are the high prices of fuels and CO2 emission rights.

At the beginning of September, the main European markets continue to break price records, as it was happening in the recently completed month of August. On September 5, several markets reached the highest average daily price of this year 2018: MIBEL Spain and MIBEL Portugal, 74.58 €/MWh and EPEX SPOT Germany, 66.64 €/MWh. In these markets the price of September 5 is also the highest for a September of the last decade, as well as for EPEX SPOT France, 69.41 €/MWh. In the case of the NordPool market, from Nordic countries, the average price of September 5 is the highest for a September since 2011, 61.34 €/MWh. In other markets such as the Italian IPEX and the British N2EX there have been no records but the prices of the first days of September are around 2 €/MWh higher than those of the last days of August. 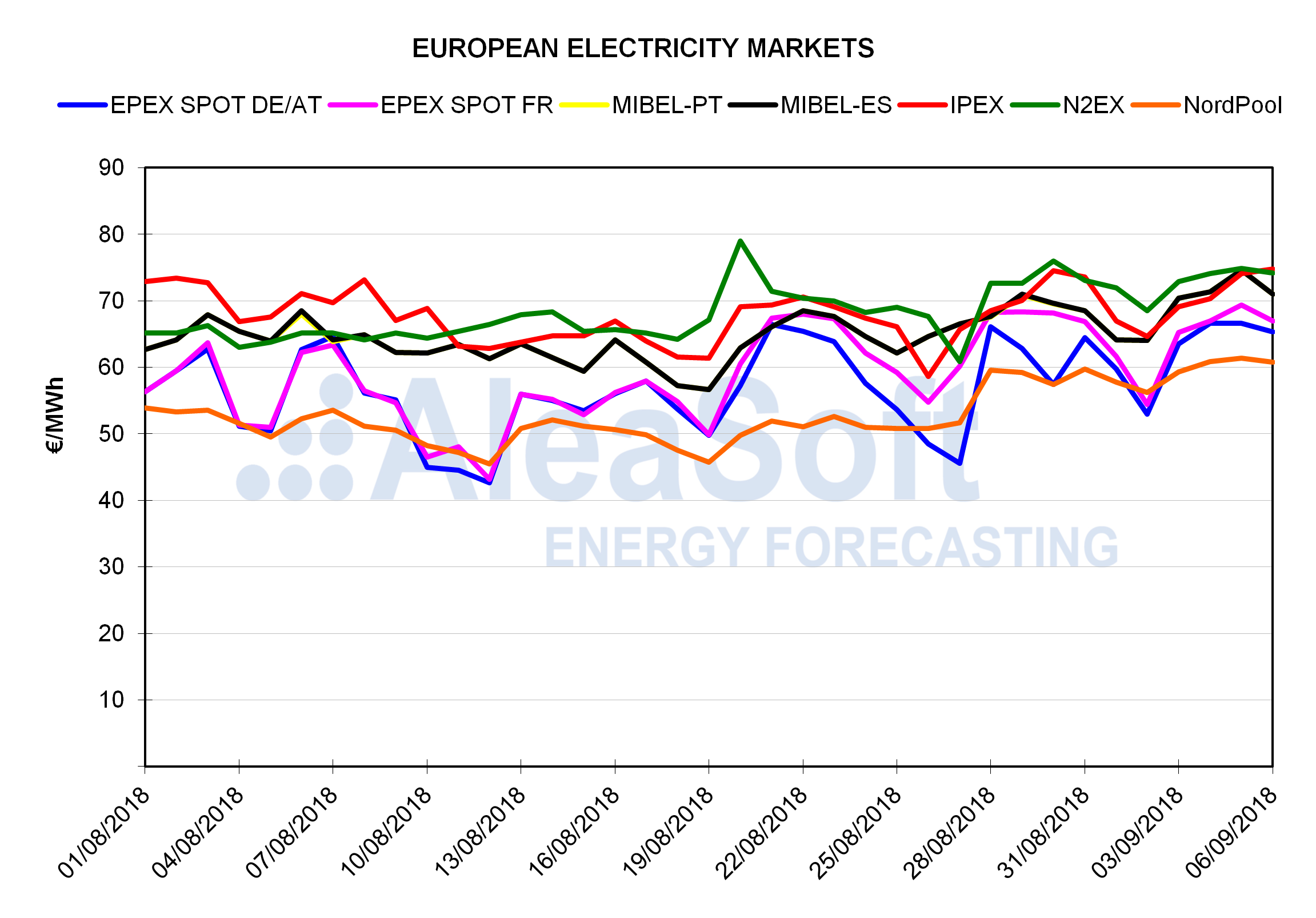 According to AleaSoft’s analysis, the main causes for the rise in prices of electricity markets are the high fuels and the CO2 emission rights prices, which continue at the highest levels since the price escalation started in May this year.

The benchmark European coal API 2 price for September 2018 has started this month with continuous increases, reaching 101.98 $/t in session of September 5, 1.03 $/t higher than in the session of August 29.

European gas futures price continues to rise too; in the session of September 5, the futures for October 2018 closed above 27 €/MWh, the highest price since this product is being negotiated.

The Brent oil futures price for November 2018 has been above 78 $/bbl in the first days of September, although at the session of September 5 it closed at 77.27 $/bbl.

The price of CO2 emission rights has slowed down its upward trend since the beginning of September, although it remains at values above 20 €/t.

The electricity futures for Spain and Portugal traded in the OMIP market are above 72 €/MWh for the fourth quarter of this year, Q4-18, and the year 2019 is negotiated above 61 €/MWh. AleaSoft estimates that next week the price of the spot markets MIBEL Spain and Portugal will continue above 70 €/MWh.