AleaSoft, December 3, 2018. In this second release of the AleaSoft summaries on the main factors that have influenced the price of the Iberian electricity market this year 2018, the influence of the rest of European markets through interconnections is analysed.

The interconnection between the European countries is essential to achieve the implementation of the European Internal Energy Market whose objective is the supply of electricity and gas to European consumers in a safe way, sustainable with the environment and at the lowest possible price.

The underwater electrical interconnection project through the Gulf of Bizkaia is currently under consultation; this project will increase the electricity exchange capacity between Spain and France to 5,000 MW. Its commissioning is scheduled for 2024-2025. This project has been declared of European interest. Nevertheless, Spain will continue to be below the objectives set by the European Union.

In 2018, until December 4, there has been Market Coupling between Spain and Portugal, that is, the price of Spain and Portugal has been identical, the 94.61% of the hours. The average price of Portugal to date, of 57.09 €/MWh, has been slightly higher than that of Spain, of 56.93 €/MWh. In most of the months of 2018, Spain has been a net importer from Portugal. 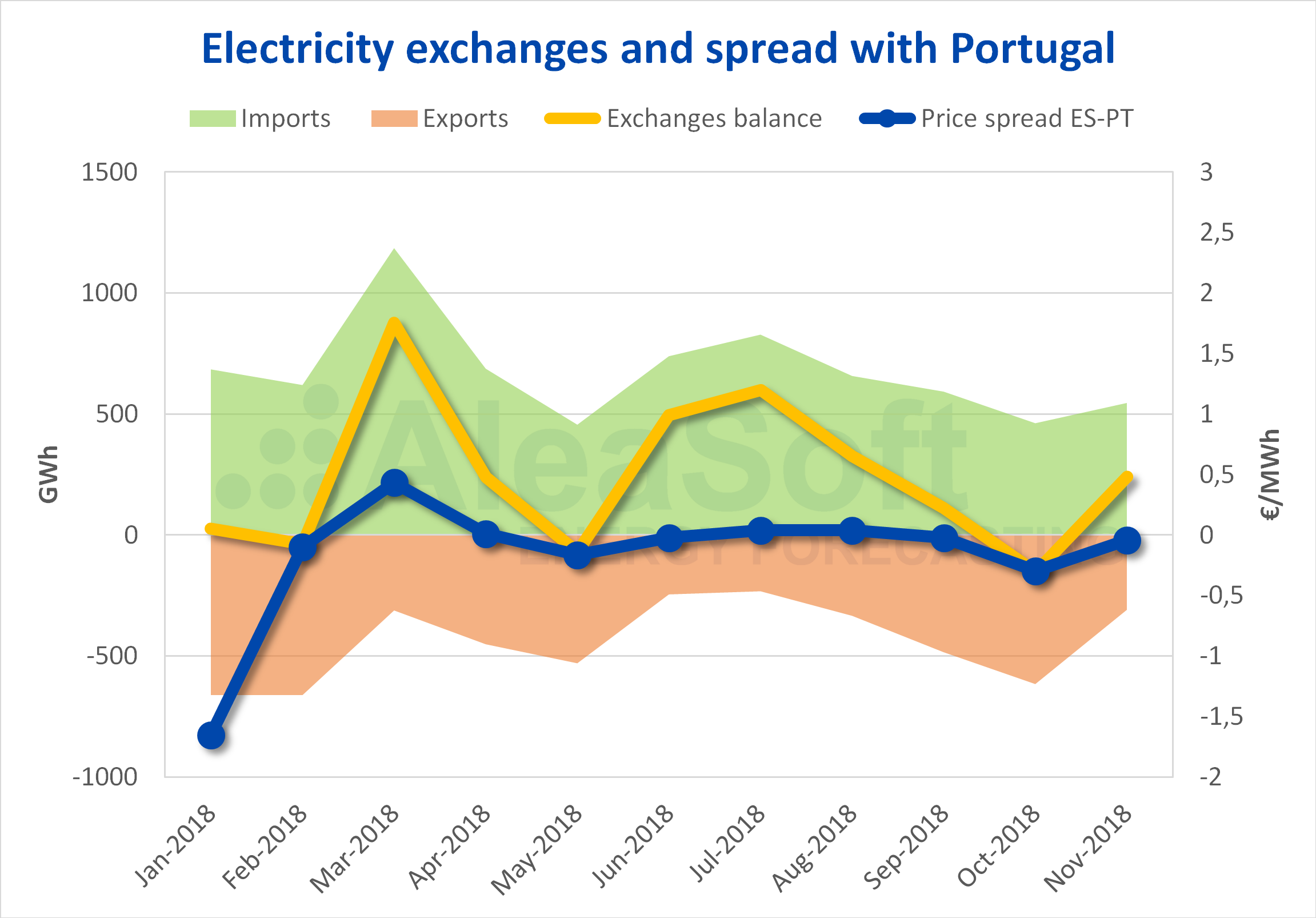 Sources: Prepared by AleaSoft with data from OMIE and E.SIOS. 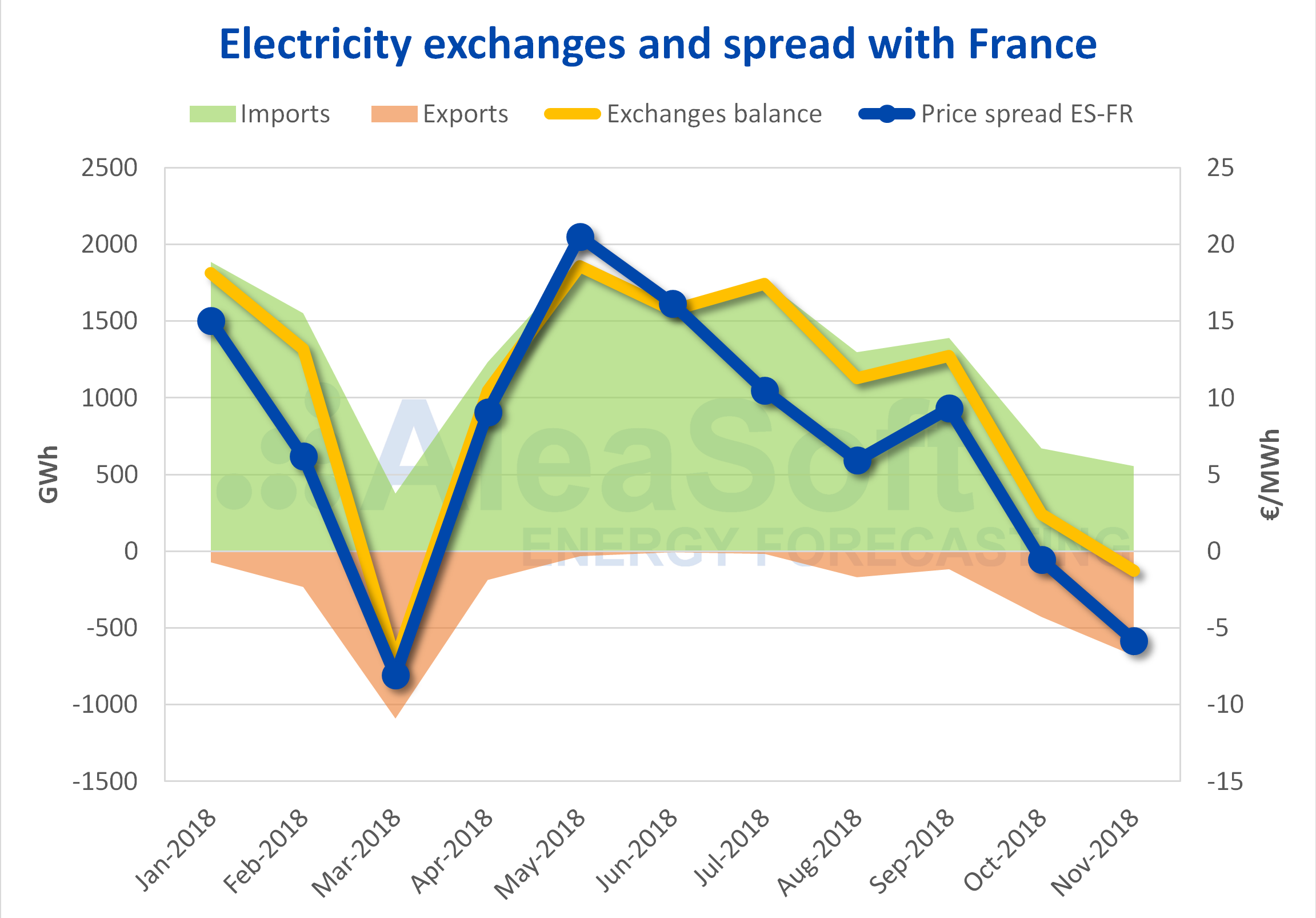 Sources: Prepared by AleaSoft with data from OMIE, E.SIOS and EPEX SPOT.

The average price of France in 2018 until December 4, of 49.81 €/MWh, has been lower than that of Spain. In this way, having been a net importer of electricity from France, Spain has achieved a lower price than if there were no interconnection. 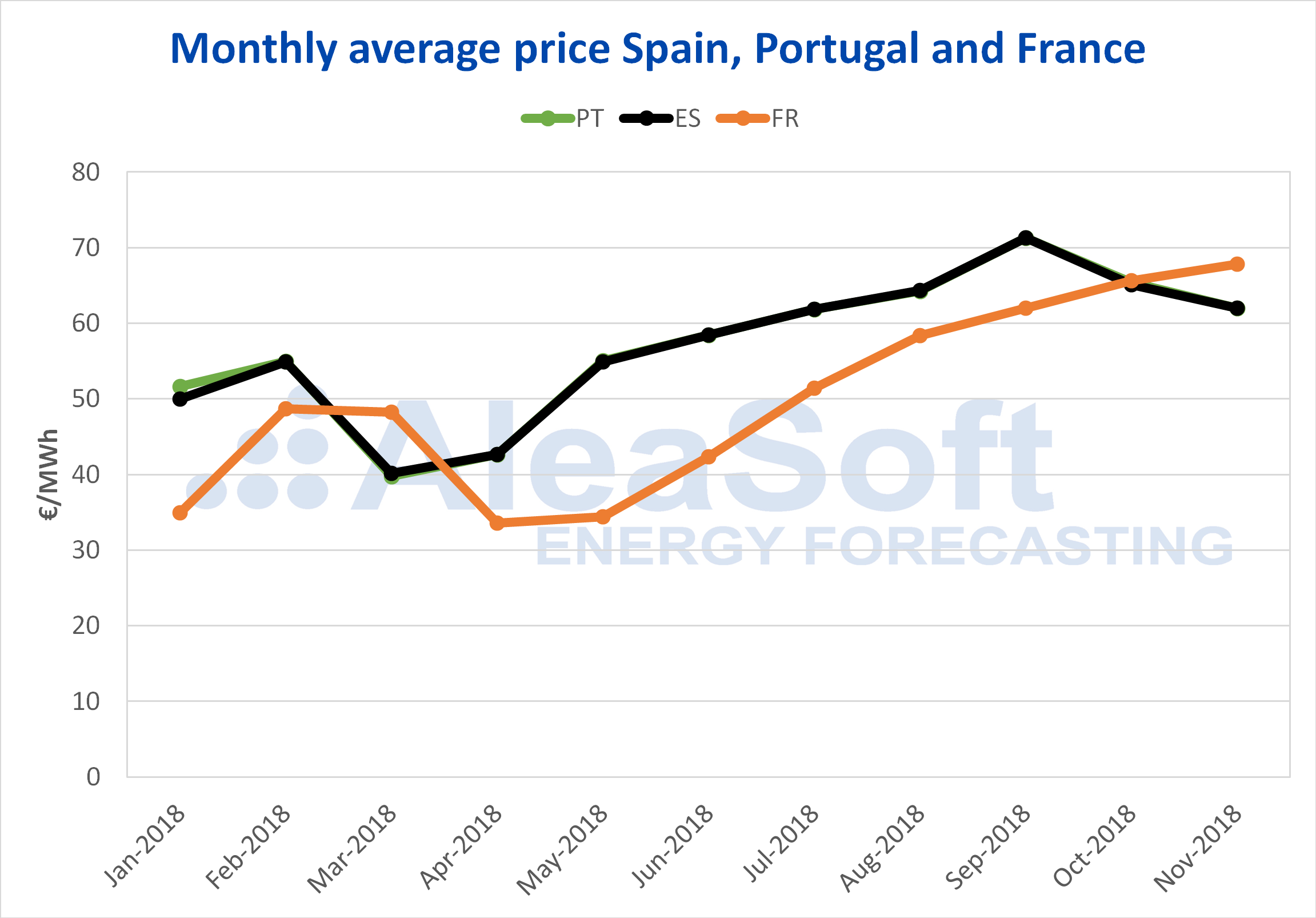 Sources: Prepared by AleaSoft with data from OMIE, E.SIOS and EPEX SPOT.

After the publication of the Royal Decree-Law 15/2018, of October 5, with measures to lower the electricity bill, more Spanish gas combined cycles have come to produce in the electricity market, displacing agents that generate electricity from our neighbouring countries.

AleaSoft considers that the reinforcement of interconnections is fundamental for the development of the European electricity market with more homogeneous and more stable prices. Better interconnections will allow a greater integration of renewable energies with the consequent elimination of other pollution sources and non-renewable electricity production.

PrevAnteriorCoal price puts the brakes on its fall, Brent tries it with no success
SiguienteSpanish electricity market price among the lowest in Europe in NovemberNext
Menu
Facebook-f Twitter Linkedin Instagram