AleaSoft, October 7, 2020. On the occasion of the 21st anniversary of AleaSoft on October 8, a brief comparison of the current electricity system with the one that existed 21 years ago and with the one expected in 21 years is presented in this article. 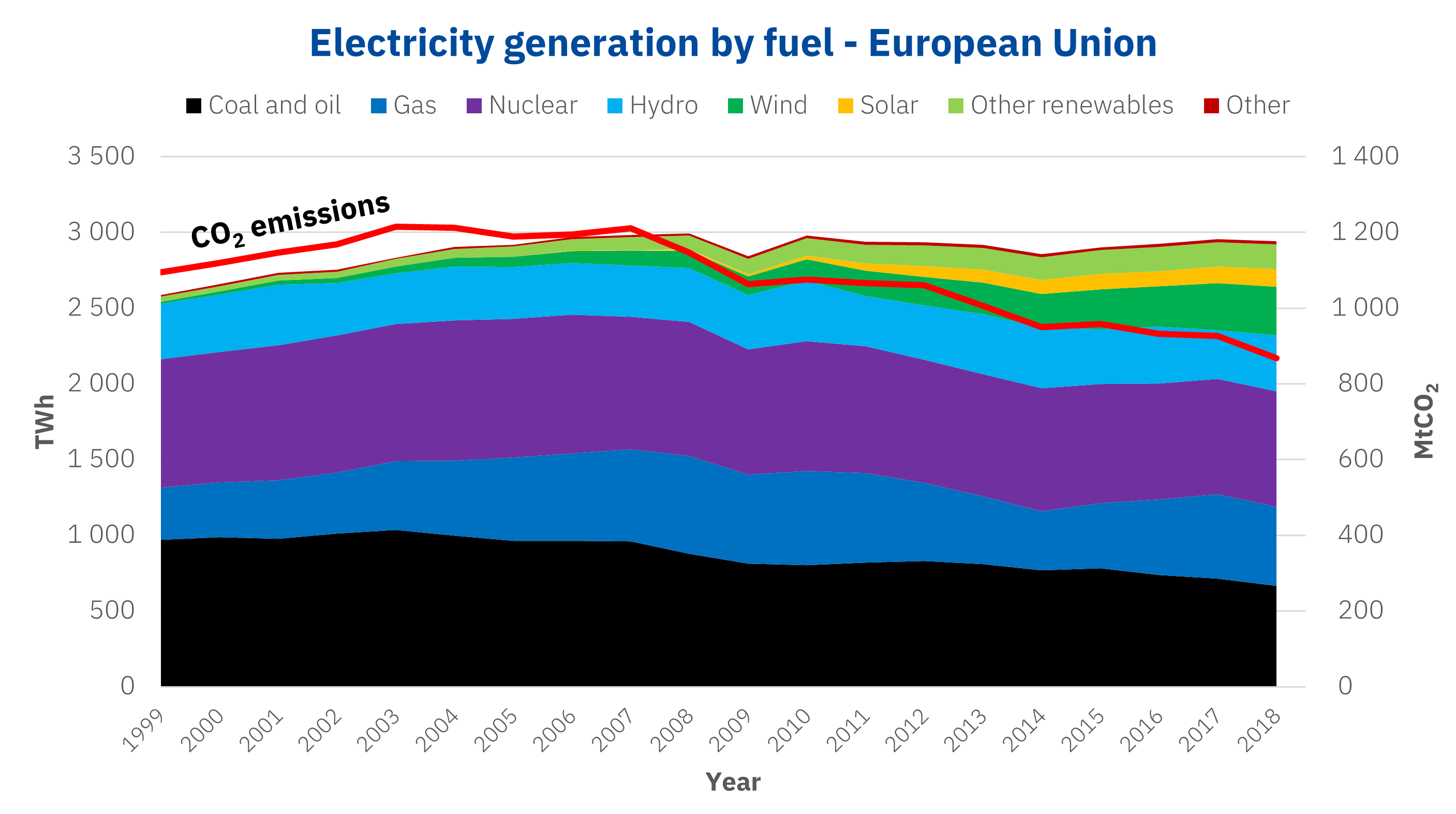 This value of the 14% growth in produced electricity may not say much on its own. But compared, for example, with the increase in total energy consumption, that is, both electricity and fuels for transport, industry, heating, agriculture, etc., which was only 2% in all these years, it clearly indicates that the economy is being electrified. In other words, of all the energy used in Europe, an increasing fraction is in the form of electricity, although at the moment the rate of electrification is not significant: in 1999 20% of all consumed final energy was in form of electricity, while in 2018 it had only risen to 23%.

The impact that the production of all this electricity has on the environment also changed in the last 21 years. The CO2 emissions due to the electricity and heat production fell by 21% between 1999 and 2018. This drop in emissions was mainly due to an increase in electricity generation from renewable sources of 135% since 1999, going from representing 16% of all produced electricity to 33% in 2018.

As it seems that the crisis is not going to end everything, the world continues to advance. The direction that the society decided to take is towards a more sustainable civilisation that produces a less damaging footprint on the planet and its resources. This vision affects all areas: economy, consumption, production, housing … and of course, the energy sector.

In 21 years, in 2041, Europe will be halfway between the environmental goals of 2030 and those of 2050. The latter, if all goes as expected, are committed to the total decarbonisation and a neutral economy in greenhouse gas emissions. The European Parliament has just raised the CO2 emission reduction target to 60% compared to 1990 levels. If net zero emissions are to be achieved in 2050, by 2040, the reduction should be around 80%.

If the energy transition advances as expected, the Europe of 2041 will be a much more sustainable society, with an economy based mainly on renewable energy sources where the energy efficiency will have greatly increased. The electrification will have helped advance the decarbonisation of the domestic sector and part of the industrial and transport sectors. In these last two sectors, the green hydrogen will be very present as an emission‑free fuel both in its production, from renewable electricity, and in its combustion. In addition, the hydrogen will be a great store of energy from photovoltaic power plants and wind farms that will thus be able to accumulate large amounts of energy for long periods of time and avoid discharges.

To learn more about the past, but above all about the future of the energy system and markets in Europe, at AleaSoft a series of webinars on “Energy markets in the recovery from the economic crisis” is being organised. The second part of this series will take place on October 29 and will also feature the participation of two invited speakers from the consulting firm Deloitte, Pablo Castillo Lekuona, Senior Manager of Global IFRS & Offerings Services and Carlos Milans del Bosch, Partner of Financial Advisory, and the topics analysed in the first part of the webinar will continue to be deepened.