December begins with record prices in the european electricity markets

AleaSoft, December 3, 2020. In the first days of December, several European markets reached the highest daily or hourly prices in 2020. This behaviour was favoured mainly by the increase in electricity demand as a result of the decrease in temperatures. The CO2 prices continued to rise and exceeded €29/t, something that did not happen since September. The electricity futures prices also rose in almost a generalised way.

The EPEX SPOT electricity markets of Germany, Belgium, France and the Netherlands, as well as the IPEX market of Italy reached the highest daily price of 2020 on Wednesday, December 2, taking into account the markets data up to December 3. That day, the prices of these markets were higher than €72/MWh and at least one hour exceeded €100/MWh.

Other European electricity markets also reached record prices during the first days of December. In the MIBEL market of Spain, at the hour 9 of December 3, the highest hourly price of the year so far, of €62.57/MWh, was registered. In the case of MIBEL Portugal, the price for the hour 10 of that same day, of €61.77/MWh, was the second highest in 2020.

The Nord Pool market of the Nordic countries, although it has the lowest prices of the electricity markets of the continent, also registered records in the first week of December. In this case, the price of the hour 18 of December 1, with a value of €43.73/MWh, was the highest of the year. 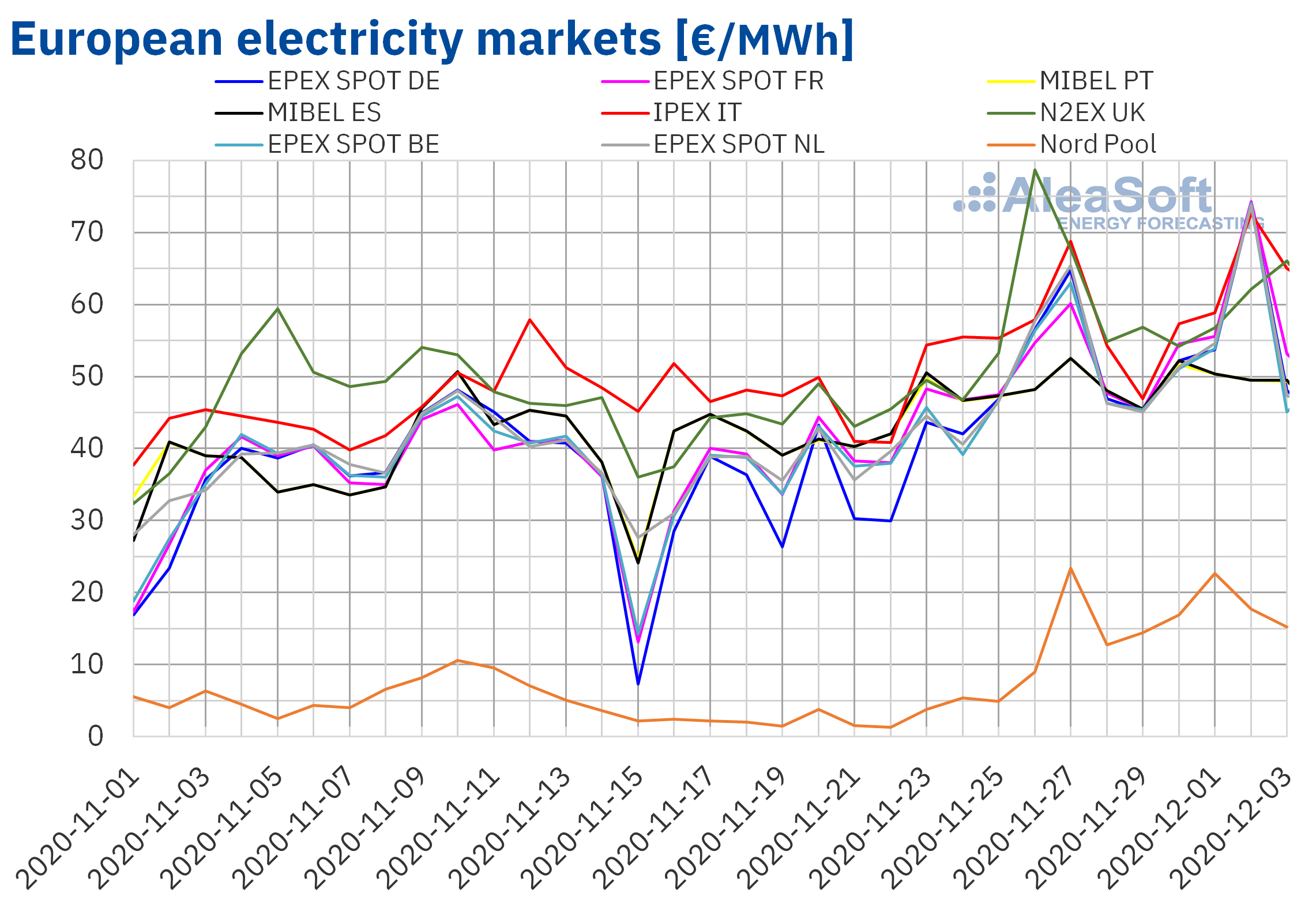 The main cause of the price rises in the European electricity markets was the almost general increase in demand in the first three days of the week of November 30, the cause of which is mainly the drop in temperatures. The highest rise was registered in the French market, and was 8.0%. The exceptions were the two markets of the Iberian Peninsula. In Spain, the demand fell slightly compared to the same days of the fourth week of November, by 0.2%, and in Portugal the decrease was 4.5%, largely because December 1 was a public holiday in that country. 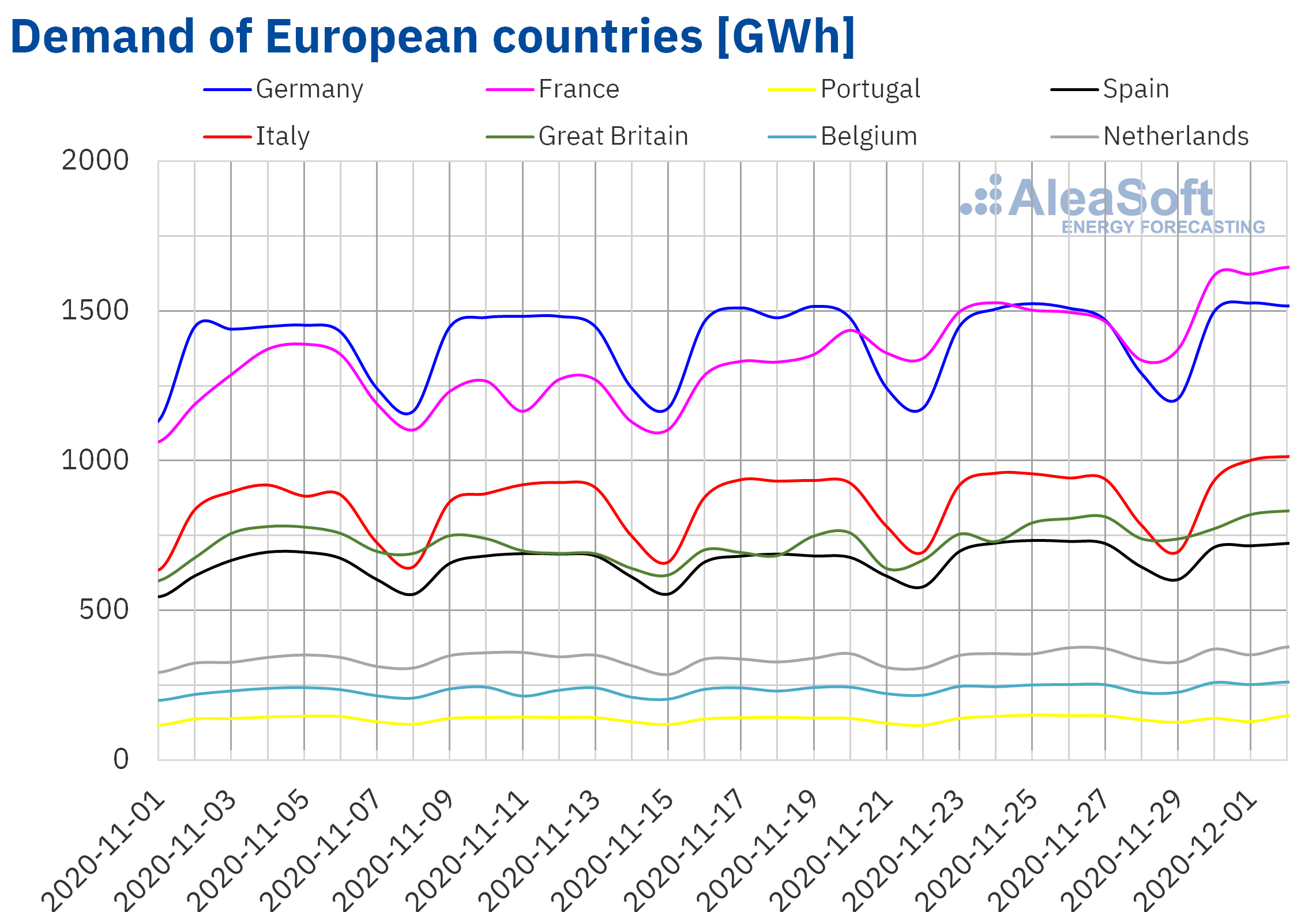 Another factor that favoured the increases in the European electricity markets prices was the increasing trend in the CO2 emission rights prices. The settlement price of December 2 of the CO2 futures for the December 2020 product in the EEX market was €29.55/t, the highest value since September 17. The drop in temperatures favoured this increase in prices, which was also influenced by the possibility that the European Union agrees to increase its emission reduction targets.

On the other hand, the Brent futures for February 2021 in the ICE market remained stable during the first week of December, with values above $47/bbl. The settlement price on Wednesday, December 2, was $48.25/bbl.

On Monday, November 30, the OPEC reached a consensus on maintaining the current production cuts in the first quarter of 2021. However, the agreement is pending the OPEC+ meeting, which was postponed to December 3 due to the difficulty to reach an agreement with Russia. However, the possibility of an agreement finally being reached led to the Brent prices remaining at the current levels with a tendency to grow. Other factors that favoured the behaviour of this market in recent days are the approval of a vaccine against COVID‑19 in the United Kingdom and the recovery of the activity in the India’s refineries.

The TTF gas futures for January 2021 in the ICE market, after exceeding €15/MWh on Monday, November 30, fell on the following Tuesday and Wednesday, although they remained above €14.90/MWh.

The API 2 coal futures for January 2021 in the ICE market continued the upward trend that began on November 20 and exceeded $62/t on December 2, something that did not happen since the first half of January of this year. 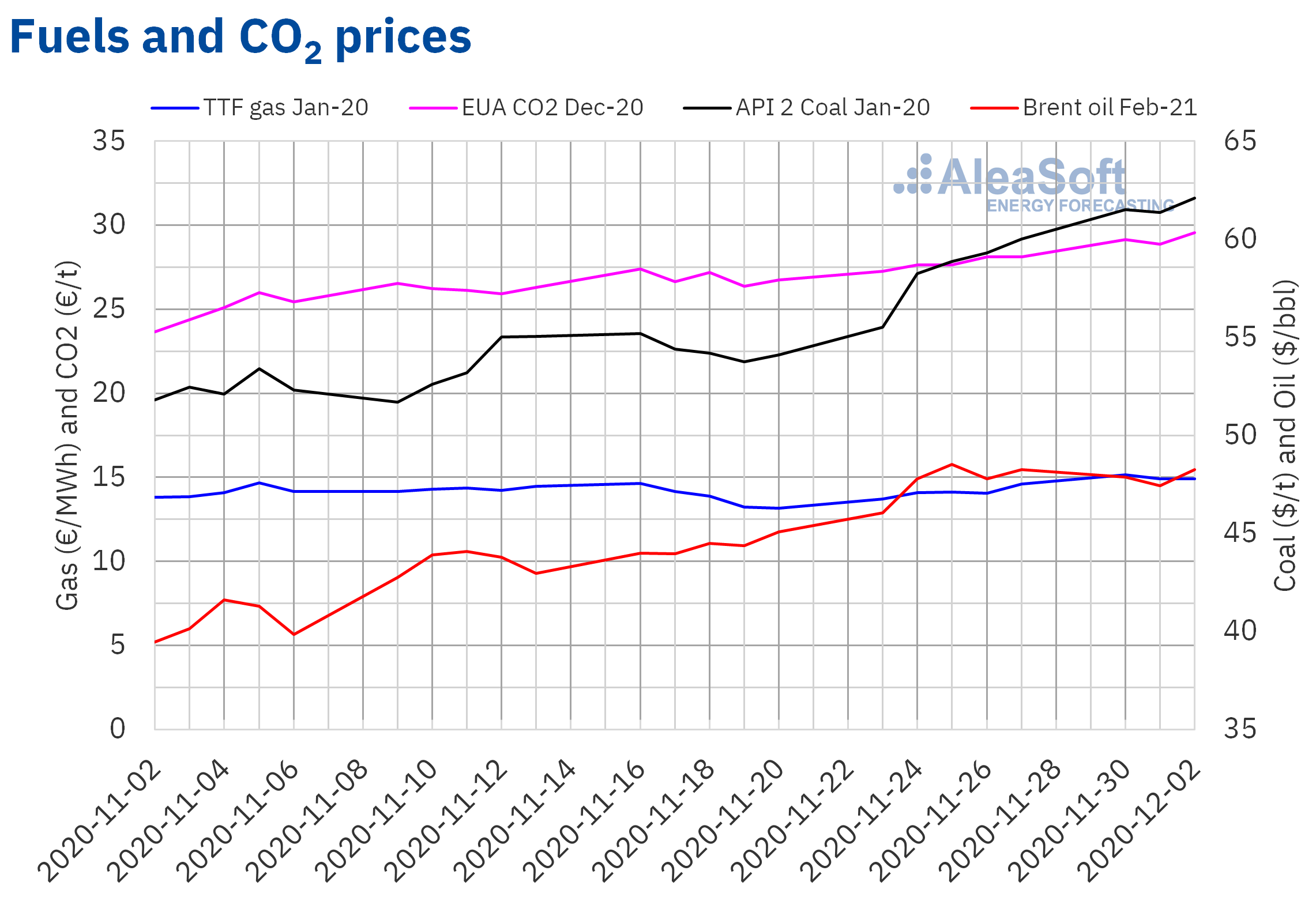 The electricity futures prices for the next quarter and year increased in most European markets in line with the increase in the CO2 emission rights prices.

The solar energy production of the first three days of the week of November 30 recovered by 34% compared to the average of the previous week in the Iberian Peninsula. However, in the rest of European markets it fell, reaching a 30% drop in Germany. 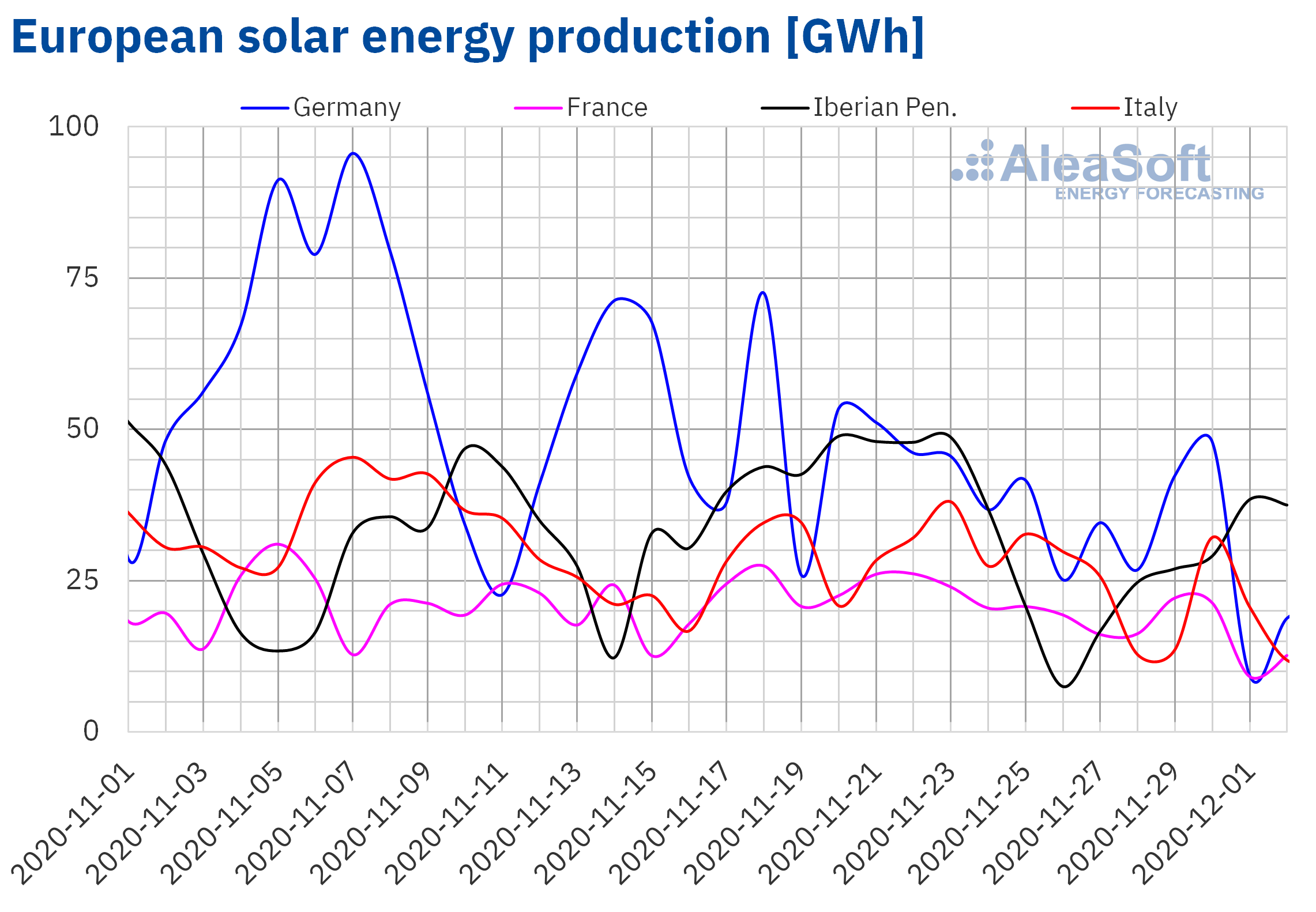 The wind energy production increased in most European markets if the average of the period between November 30 and December 2 is compared with that of the week of November 23. The largest increase was registered in Italy and was 54%. The only market where the production with this technology fell was the German, with a variation of ‑20%. 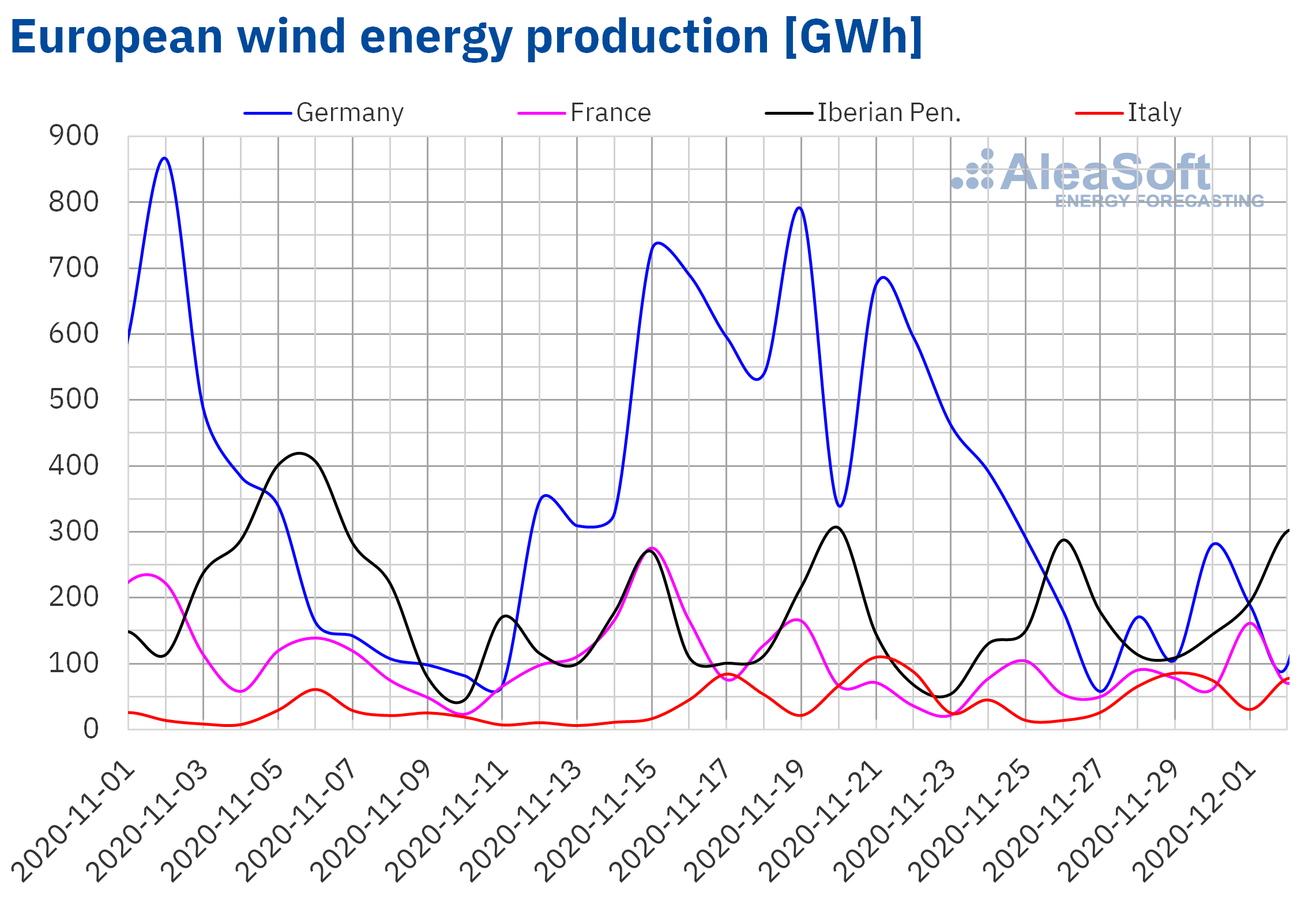 At AleaSoft the first webinar of the year 2021 is being organised for January 14. The topics to be discussed are the prospects for the energy markets from the year that will begin and the vision of the PPA market for the large consumers. Speakers from PwC Spain will also participate in this event.

Based on the experience and the information gathered during more than 21 years, AleaSoft is also specialised in the realisation of detailed reports for the energy sector.

PrevAnteriorTechnical Due Diligence: “The renewable energy projects are real plants that have to be built”
SiguienteThe digitalisation of the energy sector is essential to reach the 2050 objectivesNext
Menu
Facebook-f Twitter Linkedin