AleaSoft, March 20, 2020. Since the crisis of COVID 19 began, at AleaSoft, the repercussions in the energy markets of the measures to stop the spread are being analysed. The conventional gas demand remained similar to that of last week as some industries increased their production to meet the needs of this situation, although the hourly distribution changed. The gas and Brent prices fell and they are expected to remain low while this situation lasts.

The total gas demand of Spain is made up of the conventional gas demand and the gas demand for the electricity sector. The conventional gas demand includes the commercial domestic sector and the industrial sector. The gas demand for the electricity sector includes the combined cycle gas turbines and cogeneration consumption. All this information is published by Enagás.
In the first four days of this week, the total gas demand of Spain was 7.9% lower than that of the same days of last week. The greatest decrease was in demand for the electricity sector, which fell 44%. This decrease was favoured by the combination decrease in electricity demand as a result of the measures adopted to stop the expansion of the coronavirus as well as an increase in wind energy production, which left less room for the electricity production with gas.
In the conventional gas demand, the decrease in the analysed period was 0.9%, although in large part this decrease is due to the fact that March 19 was a holiday in some autonomous communities. Between Monday and Wednesday, the conventional demand was similar or higher than that of last week. On the one hand, this was because temperatures were 2.3 °C cooler than last week. In addition, the consumption increased in some industries that had to face some needs derived from the COVID 19 crisis, such as the food, chemical and paper industries. What was modified in the conventional consumption compared to last week is the hourly distribution, since the demand decreased between hours 1 and 10 and increased between hours 11 and 20. This change in the pattern is due to the decrease in consumption during the business hours and the increase in the domestic hours. 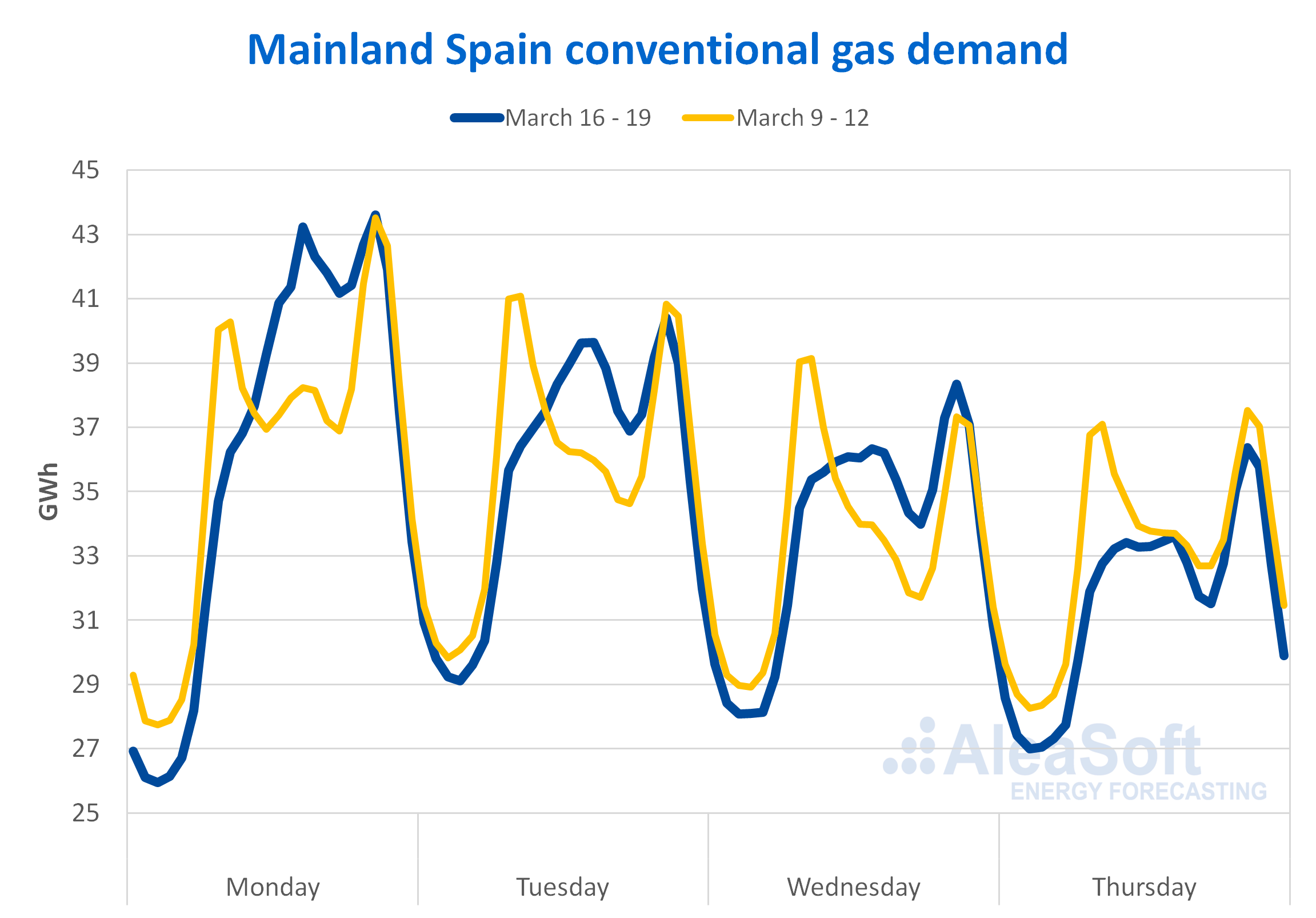 The Brent oil futures prices for the month of May 2020 in the ICE market started this month with a settlement price of $51.90/bbl, registered on March 2. But the prices fell to a settlement price of $24.88/bbl on Wednesday, March 18. This value is 52% lower than the settlement price of the first session of the month and it should be noted that prices as low as this were not registered since April 2003. In yesterday’s session, March 19, the prices recovered after the European Central Bank, the Bank of England and the United States Federal Reserve announced stimulus measures for the economy and settled at $28.47/bbl, that is, $3.59/bbl above the previous session. At the moment, this recovery is being maintained today and values above $30/bbl have been reached.
Similarly, the Brent oil prices in the spot market started this month with values around $50/bbl. However, during the month they continued with the downward trend already registered in February and this week they reached values around $25/bbl, which are at the level of those registered in the spring of 2003.
These decreases in Brent oil prices are mainly related to the drop in demand due to the expansion of the coronavirus worldwide and the containment measures adopted to stop it. In addition, the failure of OPEC+ to agree to further production cuts that would stabilise the prices in this situation and the decision of countries such as Russia and Saudi Arabia to increase their production considerably from April could further favour the price decreases on next month.
In the case of the TTF gas futures prices in the ICE market for the month of April 2020, they reached the maximum value so far this month on Wednesday, March 11. That day a settlement price of €9.37/MWh was registered. Subsequently, the prices began to drop and the settlement price of Wednesday, March 18, was €8.26/MWh, 12% lower than that of Wednesday of the previous week and the lowest in the last two years. Like Brent futures, in yesterday’s session they recovered slightly, settling at €8.54/MWh.
The TTF gas prices in the spot market during the first fortnight of March fluctuated around €9.13/MWh, reaching the fortnightly minimum value of €8.70/MWh on March 10 and the maximum value of €9.46/MWh, on the 14th and 15th. The second fortnight of this month began reaching on March 16 the highest monthly index price registered so far, at €9.56/MWh. However, as of Tuesday, the prices fell and on Thursday, March 19, the index price was €8.36/MWh, which is 13% lower than that of the day 16 and the lowest since the beginning of September 2019. Today’s index price has slightly recovered reaching a value of €8.57/MWh.
The prices of the Spanish gas futures in the OMIP market for the month of April 2020 presented a similar behaviour to that of the TTF gas futures during this month of March, but presenting values between €0.15/MWh and €0.84/MWh higher than those registered for the TTF gas futures for the same days. The maximum settlement price registered so far this month was that of March 13, of €9.70/MWh. From that day until Wednesday, March 18, the prices decreased by 9.0%. With these decreases, the settlement price of the day 18 was €8.83/MWh, the lowest so far this month. In yesterday’s session the prices remained practically unchanged, settling at €8.84/MWh.
Regarding the MIBGAS market price index, increases were registered during the first half of March. The minimum price so far this month, of €8.44/MWh, was that of March 2. While the maximum, of €10.09/MWh, was reached on Monday the 16th. But, after that day, the prices began to fall and on Thursday, March 19, the price was already €8.59/MWh, 15% lower.
The downward trend observed in gas prices in the analysed markets in the second half of March is related to the drop in demand due to the expansion of the coronavirus and to the confinement measures decreed in more and more countries to try to control the epidemic. 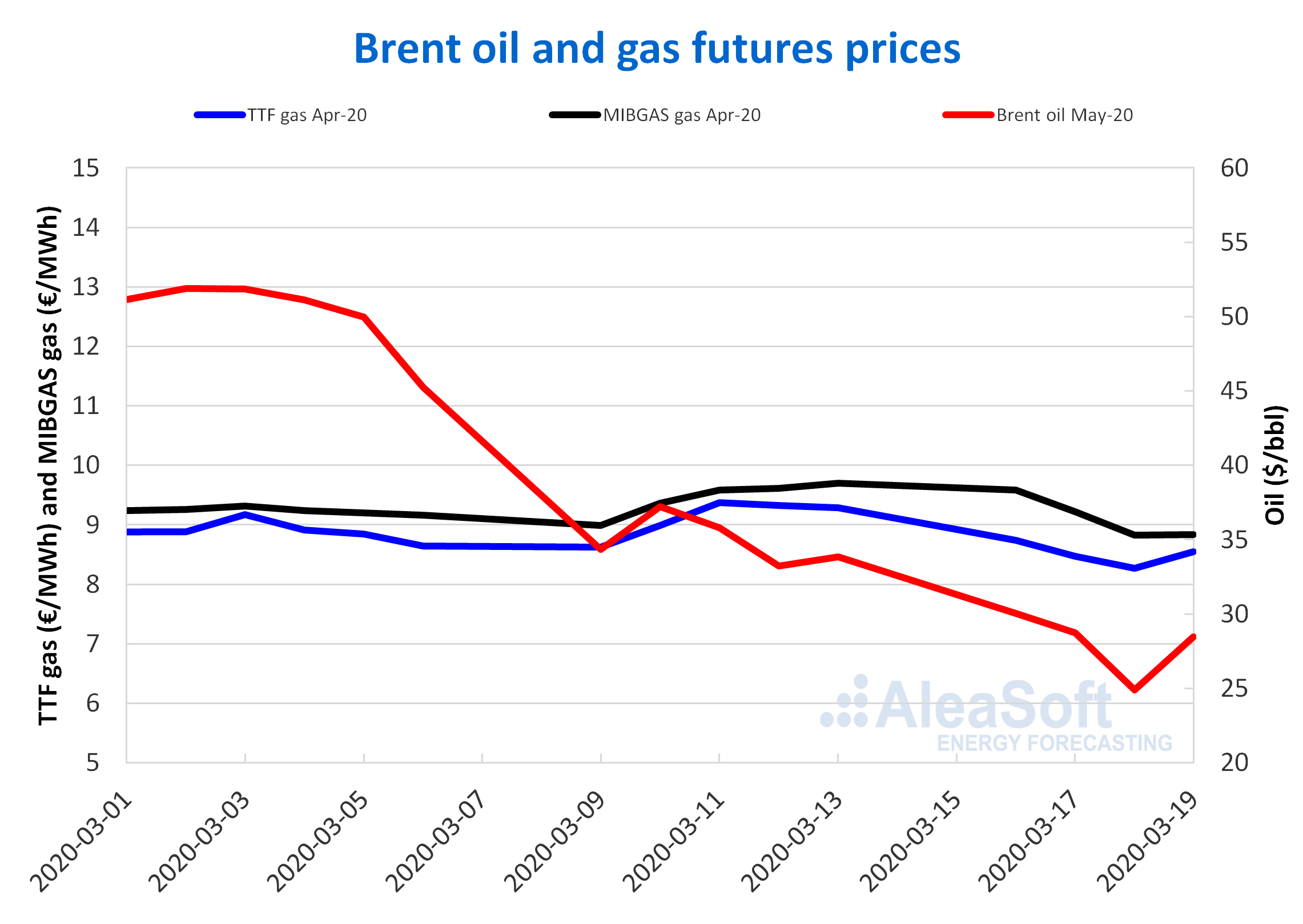 The evolution of these markets in the coming days and months will largely depend on the evolution of the COVID 19 crisis, since as long as the measures to contain its spread are maintained, a recovery in demand is not expected and, therefore, the prices will continue pressed down.
In the case of Brent and gas, there are many conflicts that lower prices, in addition to the fall in demand for the coronavirus: Saudi Arabia against Iran, Saudi Arabia and the United States against Russia and Venezuela, Saudi Arabia against the rest of the OPEC, OPEC producers against Russia, oil and gas producers against biofuel producers, conventional gas and oil producers against shale gas producers, oil and gas producers against renewable energies (solar photovoltaic, solar thermal and wind energy). In this last case, if the prices are low, the renewable energies cease to be profitable, which can cause a disincentive to many investments and the development of new parks.
In the case of gas, before the coronavirus crisis, the prices were already low due to the global oversupply, so a significant increase in prices is not expected when the current stage is over.

At AleaSoft, the electricity and gas price and demand forecast models are updated daily. During this COVID 19 outbreak, the forecast reports made are being updated with the most recent data and with the most probable scenarios.