Falls in the electricity, gas, Brent and CO2 markets due to the coronavirus

AleaSoft, March 19, 2020. The COVID 19 crisis, in addition to the human cost that it entails, is causing falls in many markets. The electricity demand in several European countries decreased, favouring the decrease in prices in the electricity markets. The electricity and TTF gas futures yesterday hit their lowest of at least the past two years and the Brent futures settled below $25/bbl, a value not reached since April 2003. The CO2 futures fell to values of early November 2018.

Comparing the first 18 days of March with the same period of 2019, the generation from this renewable source was higher in most of the markets analysed by AleaSoft. The largest increase was in the German market, with a 47% higher production. In the rest of the markets, the production increased between 4% and 21%. The exception was the Italian market, which fell by 2.8% in production with this technology so far this month.

The analysis carried out at AleaSoft indicates that at the end of this week the solar energy production in Germany and Italy will rise compared to last week’s total. 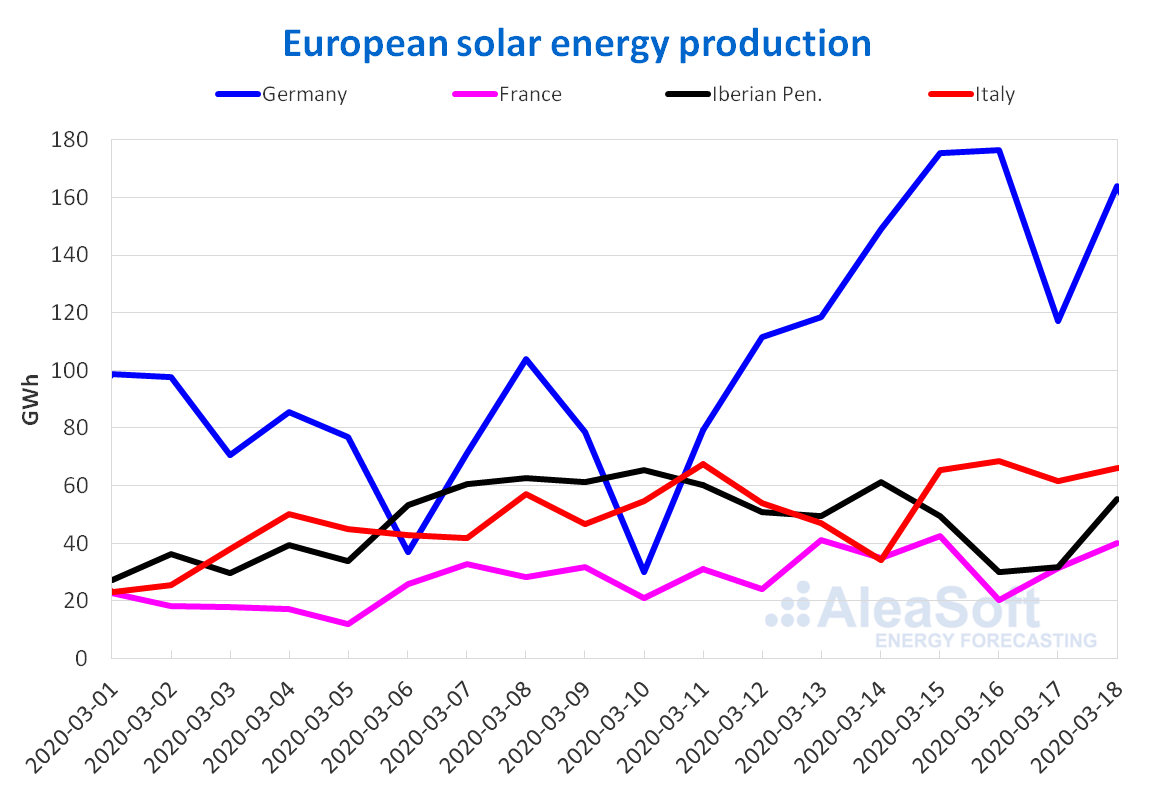 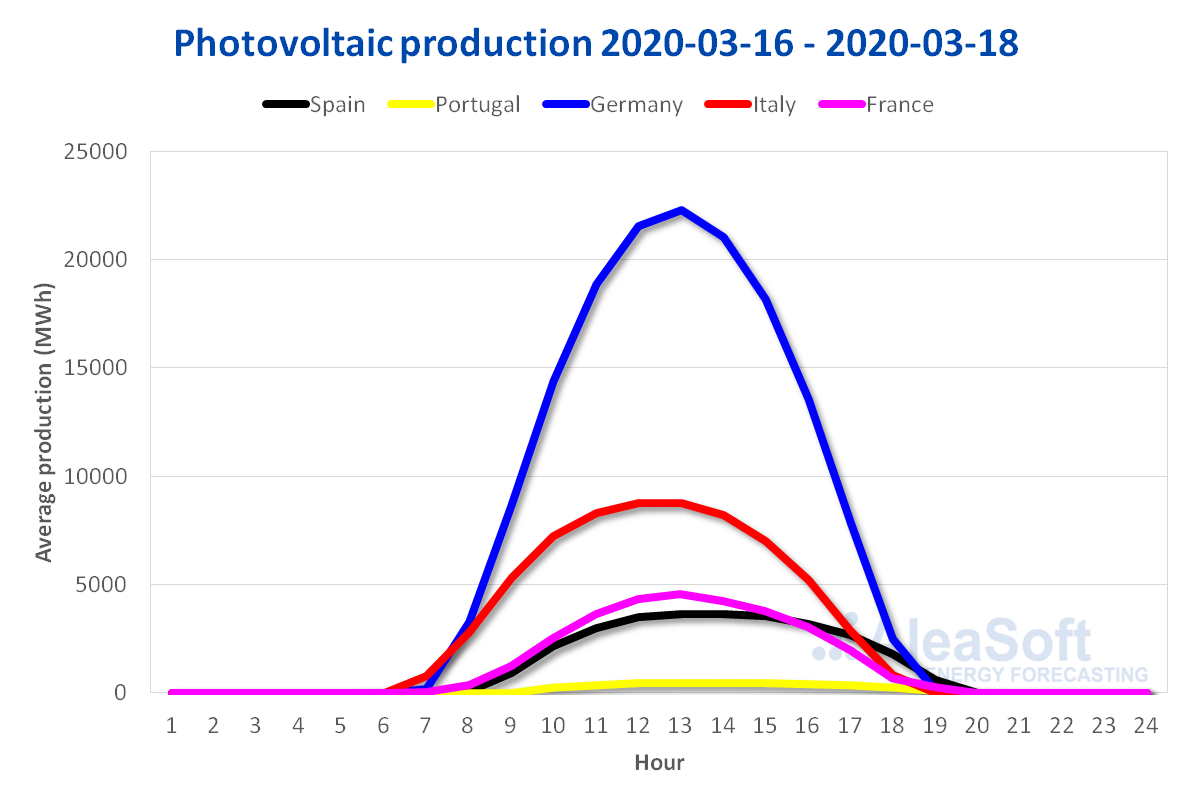 The wind energy production of the first three days of this week in Portugal was three times higher than last week’s average. In contrast, in Germany, France and Italy the average of these last three days was lower than the average of the previous week by 54%, 77% and 26% respectively.
The behaviour of the production with this technology during the current month until the 18th, compared to the same period of last year was similar to that of the current week, registering an increase in production in the Iberian Peninsula of 44%. In contrast, in Germany, France and Italy the productions fell 31%, 30% and 11% respectively.
At AleaSoft, the week’s total wind energy production in Germany, France and Italy is expected to decrease by the end of this week. On the other hand, in the Iberian Peninsula it will be higher than that of last week. 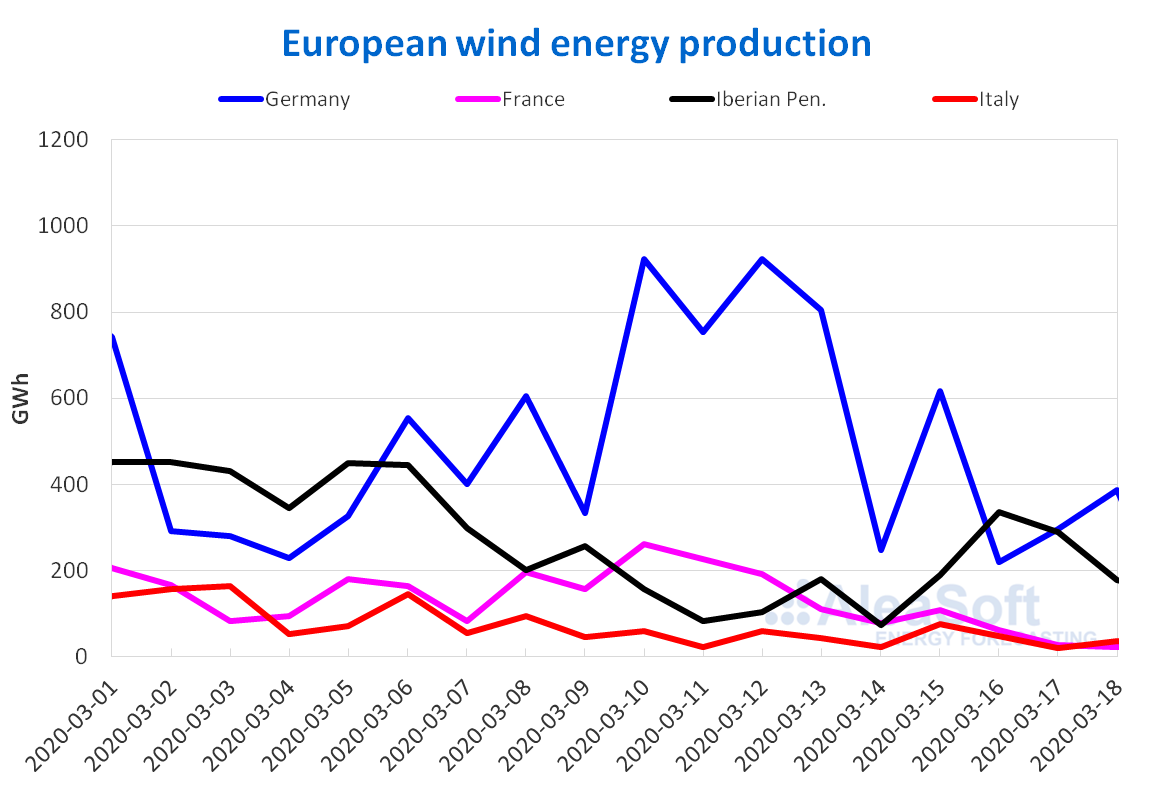 In the first three days of this week, the European electricity demand fell compared to the same period of last week in most European markets. The greatest decreases were in Italy and France, in both cases of 13%. In these two markets, in addition to the fact that the average temperatures were less cold than on the same days of last week, the effect of the measures taken to stop the expansion of the coronavirus is also noticeable. Since March 10, Italy has been subject to isolation measures and in France, on Monday, March 16, several measures were announced, including limitations on mobility. In Spain and Portugal, despite the fact that temperatures were colder between Monday and Wednesday, the electricity demand fell by 6.0% and 3.0% respectively. In Spain, since Saturday, March 14, the state of alarm was declared, which caused the decrease in demand, as discussed below. In Portugal, the state of alert was declared on March 13, which included, among other measures, the closure of schools and discotheques. The state of emergency was declared yesterday, and although the concrete measures will be decided today, it is expected that the electricity demand will continue to be affected by this reason. The only market where the demand rose slightly, by 0.8%, in these three days, was Great Britain. The temperatures of this period were very similar to those of the same days last week, and in the United Kingdom the strategy regarding the coronavirus was mitigation and immunisation to avoid the closure of the country. However, the closure of the schools was decreed yesterday, which will take effect from tomorrow, Friday.

In the coming days, the European electricity demand is expected to continue its downward trend as long as measures to curb the pandemic are maintained or accentuated. The average temperatures for next week are expected to be cooler than this week in most markets, which will also favour the drop in demand. 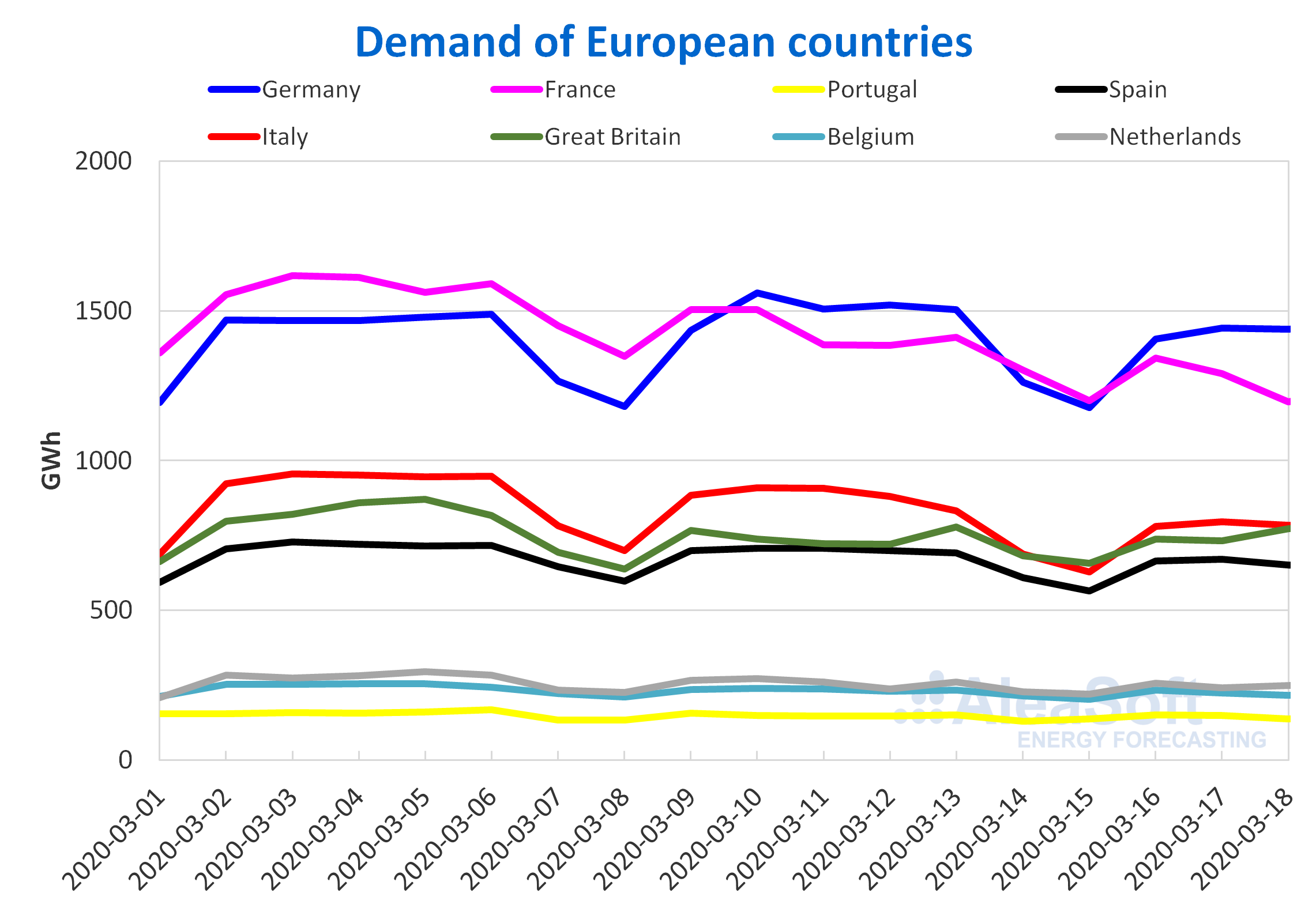 In Mainland Spain, the electricity demand in the first three days of this week was 6.0% lower than in the equivalent days of the previous week, despite the fact that the average temperatures were 3.3 °C lower than in the same period of last week. As previously mentioned, this decrease occurs as a consequence of the measures that were taken to contain the coronavirus. In addition, the hourly profile changed compared to last week. Between 8 and 10 the consumption decreased and it rose during meal time, between 13 and 16. 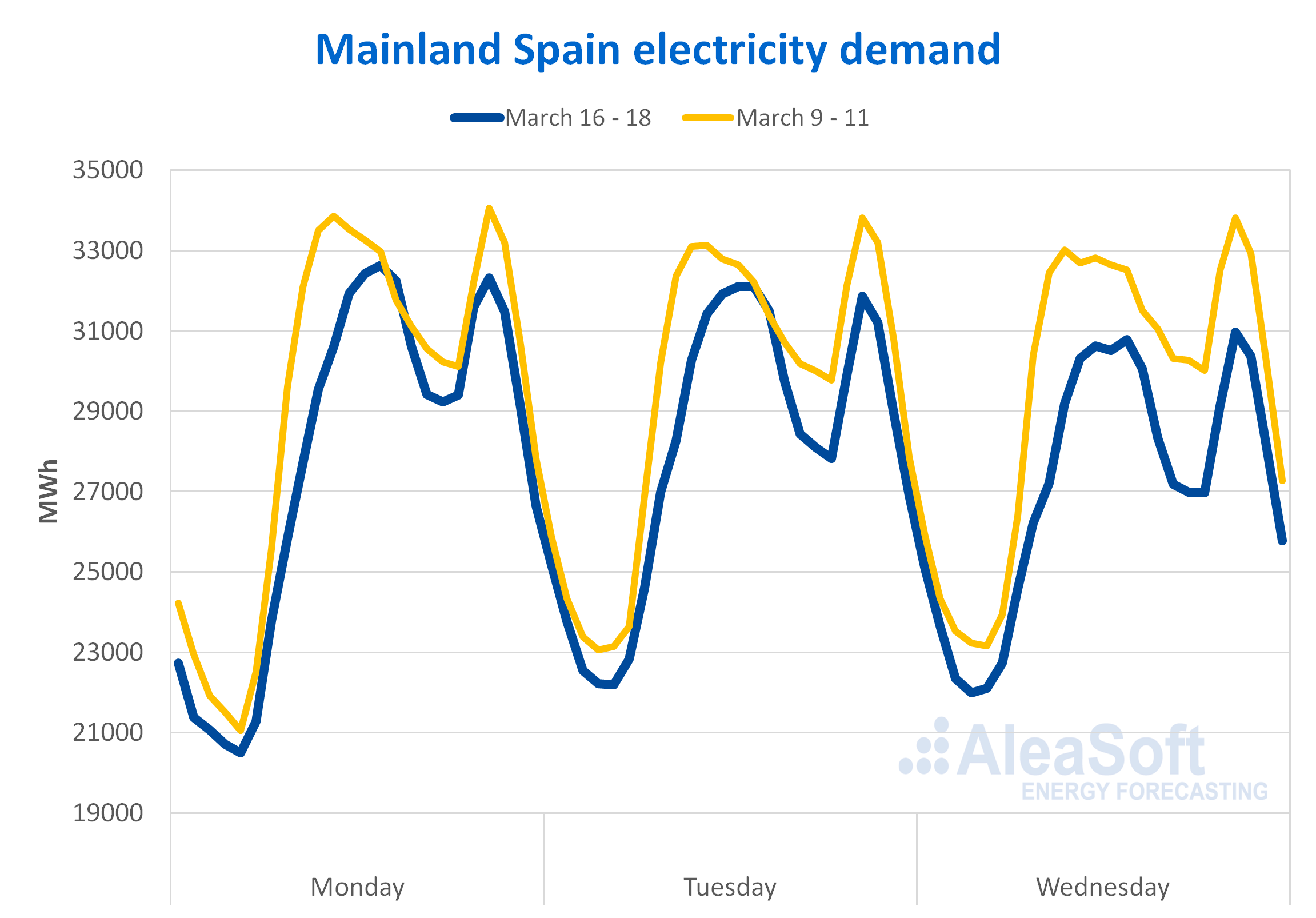 At the moment, all nuclear power plants are running and the nuclear energy production maintains a level close to 170 GWh per day. 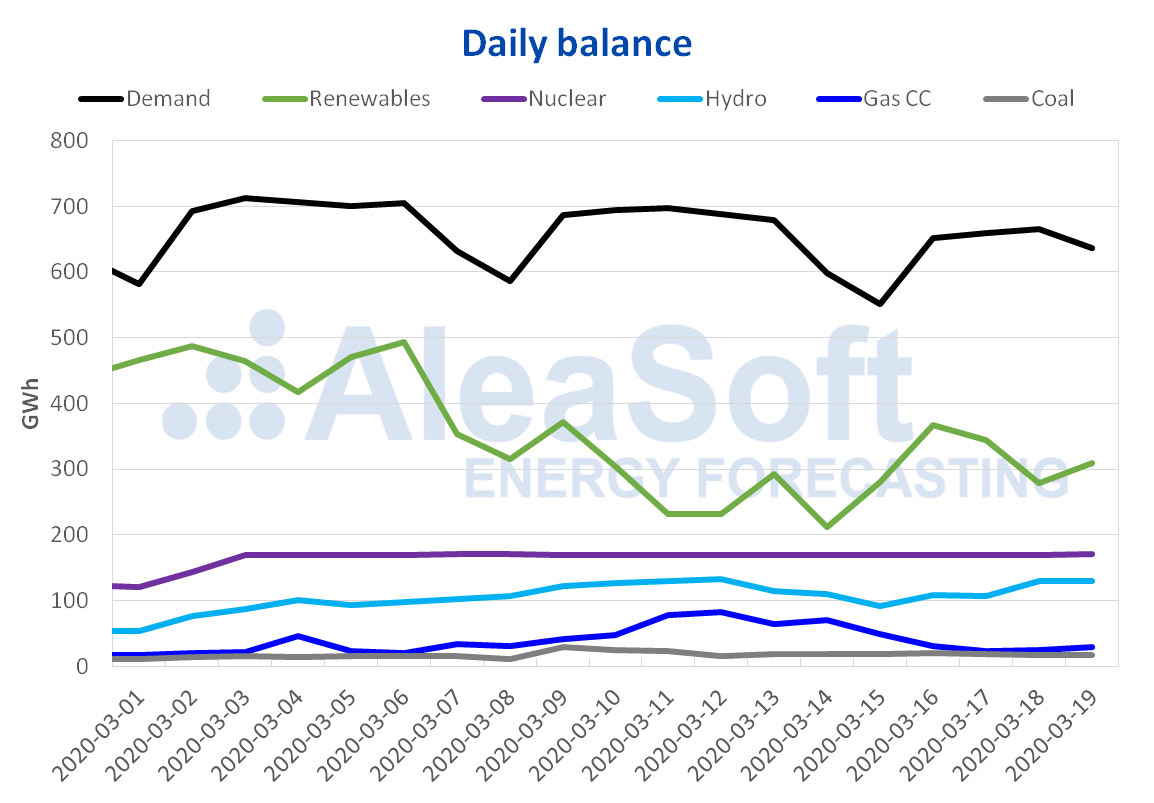 The hydroelectric reserves currently have 13 414 GWh stored, representing an increase of 26 GWh compared to the previous bulletin, according to data from the last Hydrological Bulletin of the Ministry for the Ecological Transition and the Demographic Challenge.

So far this week, most of the European electricity markets analysed at AleaSoft registered price drops compared to the previous week. The MIBEL market of Spain and Portugal, together with the IPEX market of Italy and the Nord Pool market of the Nordic countries were the most obvious cases of this decline. In these markets, the prices of each day of this week were lower than their respective homogeneous day of the previous week. Among the reasons that caused this decline are, in the case of the Iberian Peninsula, the effect on electricity demand of the measures taken by the government of Spain when decreeing the state of national alarm in order to stop the spread of the pandemic of the COVID‑19 coronavirus, together with an increase in peninsular wind energy production. In the case of Italy, the decrease in demand that favoured the fall in prices is more evident since the restrictions in the country were imposed earlier than in the rest of European countries. Furthermore, the fact that solar energy production in Italy was higher than that of last week also led to lower prices.

On the other hand, in the EPEX SPOT markets of France, Belgium and the Netherlands there were days that closed with higher prices and others lower than on the corresponding days of the week of March 9. However, in all of them, the difference between the average price of the first four days of this week of March 16 with respect to the same period of the previous week, is downward.

The exceptions in this price drop scenario are the EPEX SPOT market of Germany and the N2EX market of Great Britain. In both, the average prices for the elapsed days of this week were higher than last week. The case of the average price of the German market for today, Thursday, March 19, which exceeds the Thursday of last week by €16.45/MWh, stands out. This marked difference is mainly due to the great difference between the wind energy production of both days.

The AleaSoft‘s prices forecasts point to the fact that in the rest of the days of the week all markets will reduce their price. Finally, the average price of this week compared to the previous week will end up having very similar behaviour to that of the first four days. 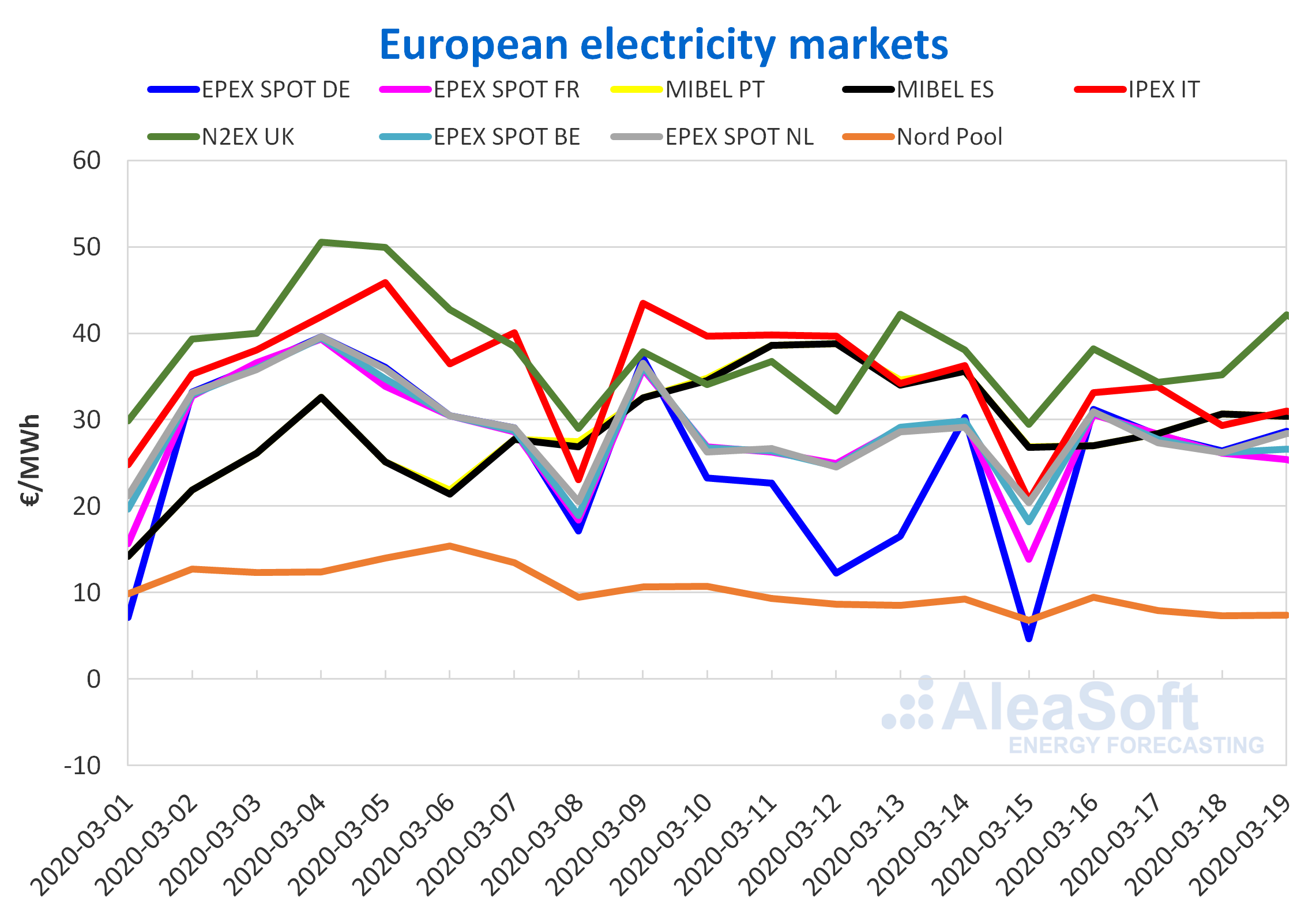 Spain is in the first week of the state of alarm decreed by the Government. The effects of the measures taken affected the behaviour of the market from the first day of the week. During the rest of the elapsed days, the decrease in electricity demand continued, accompanied by a change in the hourly consumption profile. This inevitably caused a drop in market prices, also driven by a relatively higher wind energy production than the previous week.

The electricity futures prices for the second quarter of 2020 settled yesterday March 18 with minimum values of at least the last year in most European markets. The greatest declines were registered in the Nordic countries’ ICE and NASDAQ markets, which fell about 26% compared to last Friday’s session. Similarly, the EEX markets of France and Germany showed a strong downward trend, with decreases in prices between Friday and Wednesday close to 22%. In the rest of the markets there were falls of more than 11%.

The electricity futures prices for the year 2021 also settled on Wednesday with general falls. The greatest decreases in the prices of this product were in the ICE and NASDAQ markets of the Nordic countries with a decrease of 15%, followed by the German EEX market with a variation of 12%. It should be noted that although the variations were lower in the EEX markets of France, Spain and Italy, as well as in OMIP of Spain and Portugal, they settled yesterday, March 18, at their historical minimum values of at least the last two years. These successive falls are related to the sharp drop in fuel prices and the prospects for a reduction in electricity demand in view of the European health situation, caused by the spread of the COVID 19 and the containment measures adopted by the governments of the area.

The Brent oil futures prices for the month of May 2020 in the ICE market, the first days of this week continued to decline. The settlement price of yesterday, Wednesday, March 18, was $24.88/bbl. This price is 30% lower than that of Wednesday of the previous week and represents a 52% decrease with respect to the settlement price of the first session of March, that of the 2nd, when it reached $51.90/bbl. On the other hand, prices as low as that of yesterday were not registered since April 2003.
The expansion of the coronavirus worldwide and the containment measures adopted to stop it led to a drop in demand that caused rapid falls in prices so far this month. On the other hand, if countries such as Russia and Saudi Arabia increase their production considerably from April, the excess supply will be even greater, so the decreases could increase in the next month. Although it is to be expected that, if prices continue to drop, some oil producers will not be able to cover their production costs and will be forced to resume talks to agree to further production cuts.
In the case of the TTF gas futures prices in the ICE market for the month of April 2020, the first days of this week remained below €9/MWh with a downward trend. As a consequence, the settlement price of Wednesday, March 18, was €8.26/MWh, 12% lower than that of Wednesday of the previous week and the lowest in the last two years. Today the prices are slightly higher.

The TTF gas prices in the spot market started this week of Monday, March 16, with an increase of 1.0% compared to the value of the weekend, registering an index price of €9.56/MWh, the highest so far this month. But the following days, the prices fell until reaching an index price of €8.36/MWh today. This is the lowest value since early September 2019.
Regarding the API 2 coal futures prices in the ICE market for the month of April 2020, unlike other fuels, the first days of this week continued with the upward trend that started at the end of last week. Yesterday, Wednesday, March 18, a settlement price of $50.30/t was reached, 5.5% higher than that of Wednesday of the previous week. Settlement prices above $50/t were not registered, since the $50.05/t of February 18, 2020.
The CO2 emission rights futures prices in the EEX market for the reference contract of December 2020, the first days of this week continued with the downward trend started on Wednesday of the previous week. The greatest decrease was registered yesterday with a drop of 16% compared to the previous day. Thus, the settlement price of yesterday, Wednesday, March 18, was €15.30/t, 36% lower than that of Wednesday of the previous week. But today prices above €16/t are being registered. Since the beginning of November 2018, values of this magnitude were not registered for this product.

The expansion of the coronavirus in Europe, the imposition of measures for its containment and the consequences of this on the economy result in the reduction of emissions from the electricity, industrial and transport sectors, which has led to the sharp decrease in prices of the emission rights of the last week. 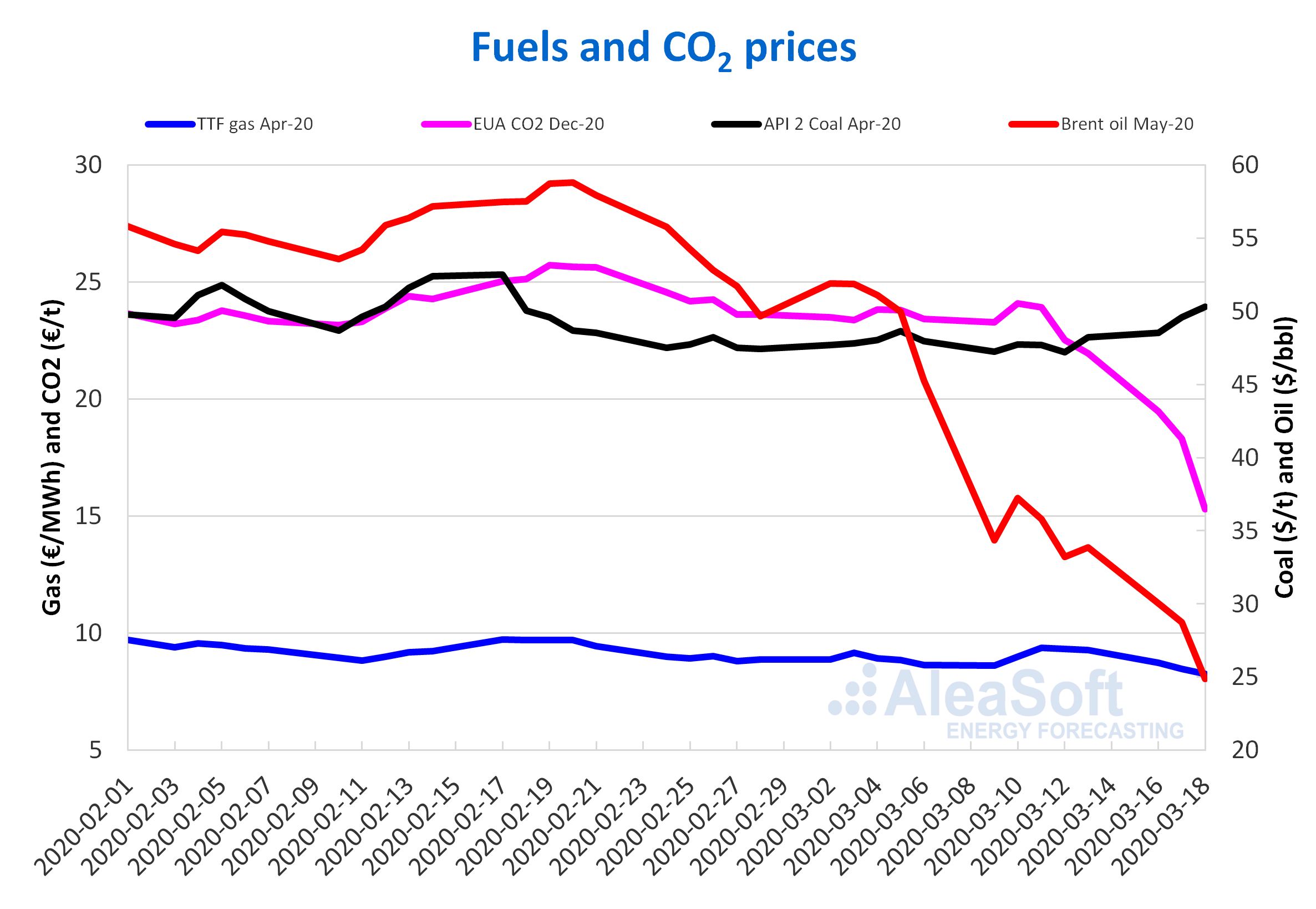