AleaSoft, February 21, 2019. This week the price of Brent oil continues to reach annual maximums due to a decrease in supply, as analysed by AleaSoft. As for the Iberian electricity market MIBEL, although it is falling again in price, it continues among the highest-priced markets in Europe.

The price of Brent oil has continued to reach annual maximums this week of February 18. Throughout the week, the futures for April of this year in the ICE market have been above 66 $/bbl and in the session of yesterday February 20 settled at 67.08 $/bbl, the maximum of this year so far. According to AleaSoft‘s analysis, production cuts from OPEC countries such as Saudi Arabia, and from other countries such as Russia, in addition to the sanctions imposed by the United States on Venezuela and Iran, are being a support for Brent prices that two weeks ago were around 62 $/bbl.

On the other hand, the API 2 coal has slowed the downward trend in prices that it had been experiencing since the beginning of October last year. Yesterday, February 20, March 2019 futures settled at 74.30 $/t, while last week, on February 12, they reached an annual low of 71.30 $/t.

The price of CO2 emission rights futures has remained around 20 €/t this week. In AleaSoft, the price is expected to remain in this range in the coming weeks. In the session of yesterday, February 20, it settled at 20.47 €/t.

This week of February 18 the MIBEL electricity market in Spain and Portugal, although it has continued to lower prices, remains in the group of markets with the highest prices in Europe. The average price of Portugal for the first four days of this week, from February 18 to 21, of 56.90 €/MWh, was 3.8% lower than the average price of the equivalent days of last week, and slightly higher than that of Spain, of 56.86 €/MWh, which was 3.1% lower than the average of the homogeneous days of last week.

On February 19, the average daily price of Spain and Portugal, of 58.89 €/MWh, was once again the highest in the European electricity markets, for the eighth time this year.

Since last week there are two different groups in terms of price in the European electricity markets as a whole. A group with prices above 55 €/MWh, to which the MIBEL market belongs, led by the Italian IPEX market with the highest prices, and which also includes the British N2EX market. The other group of markets, with prices below 55 €/MWh, includes the Nord Pool market of Nordic countries, which this week has the lowest average price, and those of Germany, France, Belgium and the Netherlands in the EPEX SPOT market. 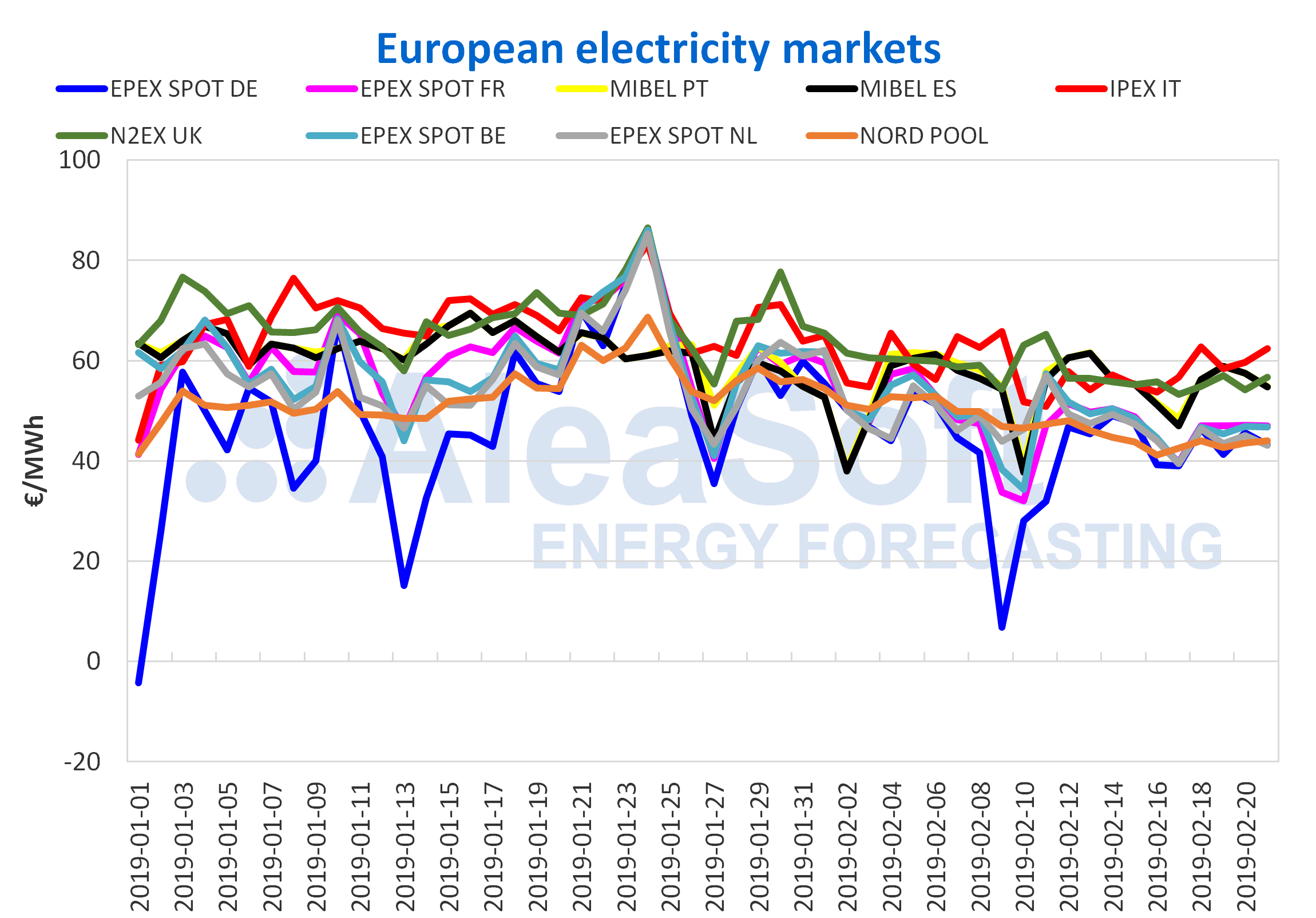 According to the analyses carried out by AleaSoft, a lower demand for electricity, due to the fact that temperatures are being higher than the usual values of this time of the year, together with the fact that there have been no nuclear shutdowns, have caused prices to fall. But on the other hand, lower renewable energy production, mainly wind energy and solar energy production, but also hydroelectric production, have made the MIBEL market to belong to the group of the most expensive markets in Europe. 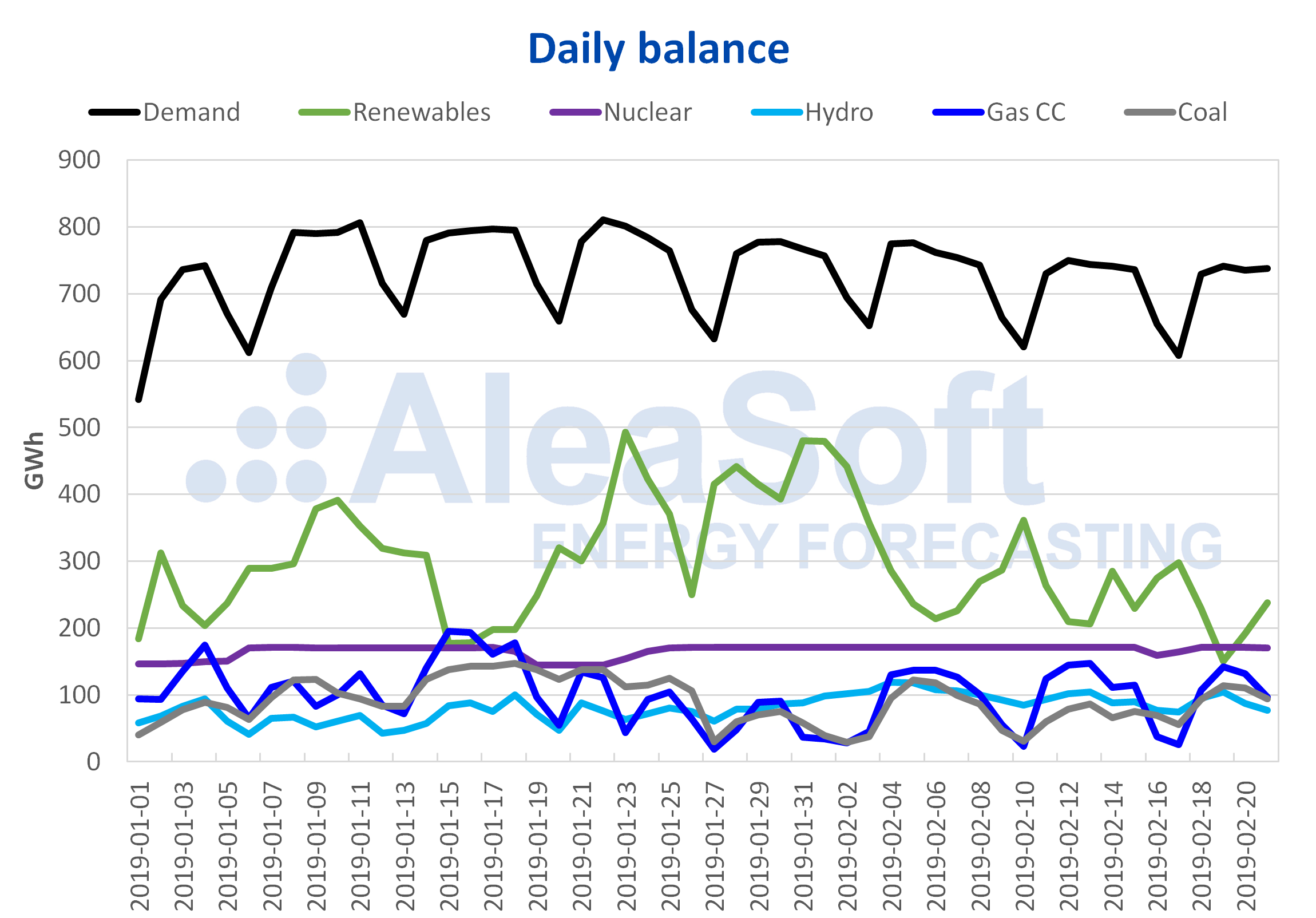 The electricity futures of Spain and Portugal for March 2019 in the OMIP market this week of February 18 have remained stable around 51 €/MWh. In the session of yesterday, February 20, those of Spain settled at 51.10 €/MWh and those of Portugal settled at 50.73 €/MWh. Similarly, in the EEX market, Spanish futures for March this year are trading around 51 €/MWh and settled on Wednesday, February 20, at 50.81 €/MWh.

On the other hand, the futures for March this year of France and Germany in the EEX market this week have slowed the downward trend and have been trading around 44 €/MWh and 41 €/MWh respectively. In yesterday’s session, on February 20, France’s futures settled at 44.76 €/MWh and Germany’s futures at 41.30 €/MWh.

Solar energy production, which includes photovoltaic and solar thermal, also decreased in the first three days of this week when compared with the same days of the previous week, in this case, 29%. According to AleaSoft’s forecasts, the next week of February 25, it is expected to increase by 21%.

Hydroelectric reserves have risen again this week, for the fourth consecutive week, according to the data published in the last hydrological bulletin of the Ministry for Ecological Transition. They currently stand at 11 094 GWh, which represents 47.7% of total capacity.