AleaSoft, February 25, 2019. AleaSoft analyses the behaviour of the fuels, CO2 emissions rights and European electricity markets during last week. Stand out the fall of prices in most of the European markets due to a decrease in electricity demand and also in the prices of gas, coal and CO2 emission rights. For its part, Brent oil has continued setting maximums.

The Brent oil price for April 2019 in the ICE futures market ended last week at 67.12 $/bbl, in the February 22 session. Since Wednesday, February 20, it has been trading above 67 $/bbl. According to AleaSoft, the positive sentiment about the development of the negotiations regarding the US-China trade dispute, the possibility that the United States will increase sanctions on Venezuela and the production cuts of the OPEC countries and their allies are the fundamental reasons for the bullish climate that the market is currently experiencing. In AleaSoft it is not excluded that this week the 68 $/bbl will be reached.

The TTF gas futures in the ICE market for March settled on Friday, February 22, with the minimum price this year, of 17.23 €/MWh, continuing the downward trend experienced by the market since September last year. One must go back to September 2017 to find a lower value.

The API 2 coal futures price for the following month in the ICE market remained stable last week of February 18, between 73 and 74 $/t.

For its part, the price of CO2 emission rights futures for the December 2019 reference contract in the EEX market ended last week, on Friday February 22, at 18.93 €/t, after having reached on February 21 the minimum value since early November last year, of 18.82 €/t. The threat of a certificates surplus of United Kingdom installations due to the possibility of a Brexit without agreement on March 29, as well as Germany’s plans to close all coal power plants before 2038 are, according to AleaSoft, some reasons that lead to this prices decrease.

Last week, of February 18, the average price of most of the European markets fell compared to the previous week of February 11, from -0.7% of the MIBEL Portugal market to -8.2% of the EPEX SPOT  Netherlands market. The exceptions were the EPEX SPOT Germany market, which rose 1.6%, although it ranked as the second with lowest price in Europe, behind the Nord Pool market of the Nordic countries, and the Italian IPEX, which rose 3.1% and was the most expensive in Europe.

According to AleaSoft, the electricity demand decrease due to the fact that temperatures were mostly higher last week, together with lower prices for gas, coal and CO2 emission rights are the fundamental reasons for the prices decrease. In the case of the German and Italian markets, lower renewable energy production, both wind energy and solar energy, are the causes of the prices increase.

In AleaSoft it is expected that, in this last week of February, most markets will maintain this slight downward trend.

Last week, on February 18, the European electricity futures markets continued the downward trend they have been experiencing since the end of last year.

The futures of the United Kingdom, Belgium and the Netherlands in the ICE market also continue with the downward trend. Last Friday, February 22, the contract of March 2019 settled at 47.92 GBP/MWh, 43.63 €/MWh and 43.53 €/MWh respectively.

The futures of Italy for March 2019, although they are also following a declining trajectory, were characterized by stability last week. In the EEX market last week prices were around 54 €/MWh and in the MTE market of GME, they remained similar to those of two weeks ago, at 54.40 €/MWh.

AleaSoft’s forecasts indicate a bullish trend of wind energy production for this week, except in Germany, where production could fall. 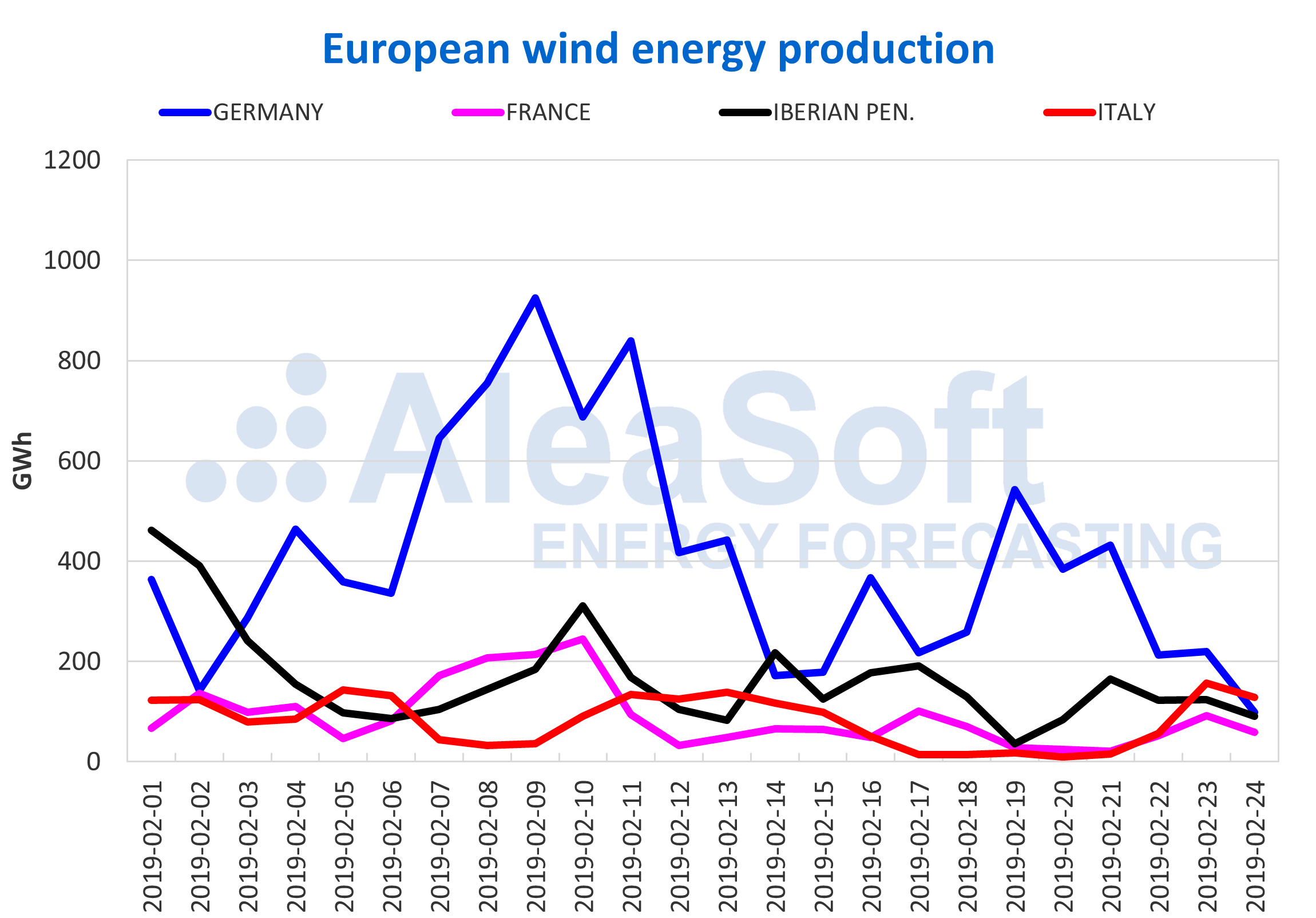 The AleaSoft’s analysis on the solar energy production, which includes both the photovoltaic and the solar thermal, shows that last week of February 18 was very similar to the previous one of February 11 in Germany, with a symbolic increase of 0.4%, but with falls more pronounced in Spain, of ‑13% and Italy, of ‑7.9%.

According to AleaSoft’s forecasts, the trend of solar production could be markedly bullish this week, as the increase in sunshine hours will be reinforced by favorable weather. 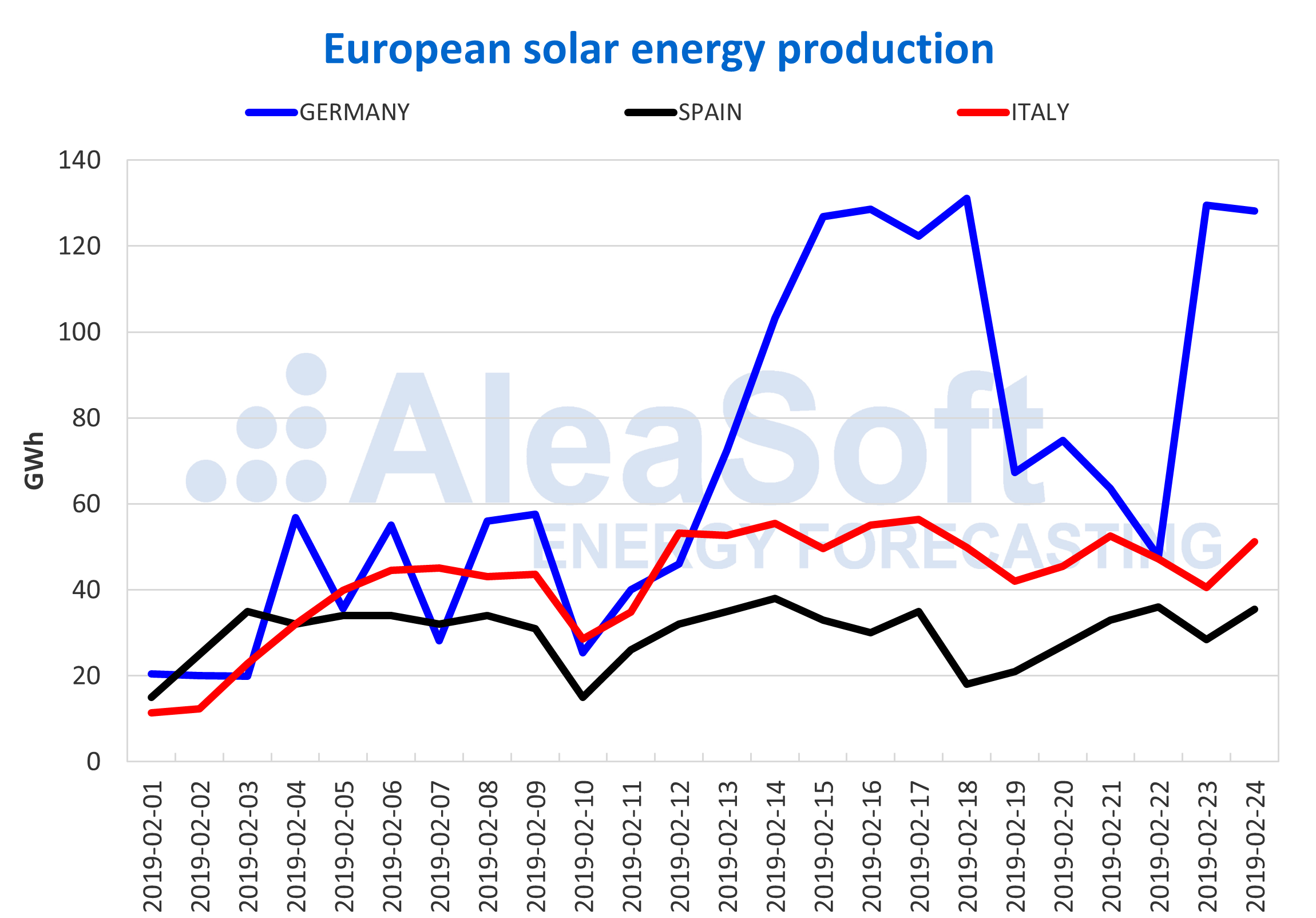