AleaSoft, August 16, 2018. In recent days, the price of CO2 emission rights prices has once again broken historical records. Meanwhile, Brent price is experiencing new falls, but the price of gas rises again after months of stagnation. AleaSoft analyzed the behavior of the price in the European electricity markets and the demand in Spain during the heat wave.

The prices of EUA CO2 emissions futures continue their unstoppable upward trend and now exceed 18 € per ton, a new absolute record for the benchmark product of December 2018.

The price of Brent oil futures continues to move away from the $80 barrier it was about to reach in July. After the 2.3% fall in the session of August 15, the future for the month of October 2018 is already close to $70, such a low price was not quoted since April.

On the other hand, European gas futures have once again registered a significant increase after three months of relatively stable prices. Since the beginning of August, the price of gas has been revalued by 7.2%, reaching 23.52 €/MWh yesterday August 15.

With regard to the price of European coal futures, since August 2 the trend has been slightly upwards, increasing by 0.7%, up to $97.41 per ton, and relatively far from the $100 barrier exceeded during the first half of July.

The heat wave of the first days of August had a clearly bullish effect on the price of the main electricity markets in Europe, according to the data analyzed by AleaSoft. The most affected markets were, on the one hand, the EPEX SPOT markets in France and Germany, where the average price between August 2 and August 8 was 7.94 €/MWh and 7.31 €/MWh higher, respectively, that in the following seven days, from August 9 to August 15. And, on the other hand, in the Italian IPEX market, where that price difference was 5.62 €/MWh. In the other markets, this difference was lower, around 3.50 €/MWh in the Spanish and Portuguese MIBEL market and 2.77 €/MWh in the Nord Pool, and even in the British N2EX market, prices during the European heat wave were slightly lower than in the following days. 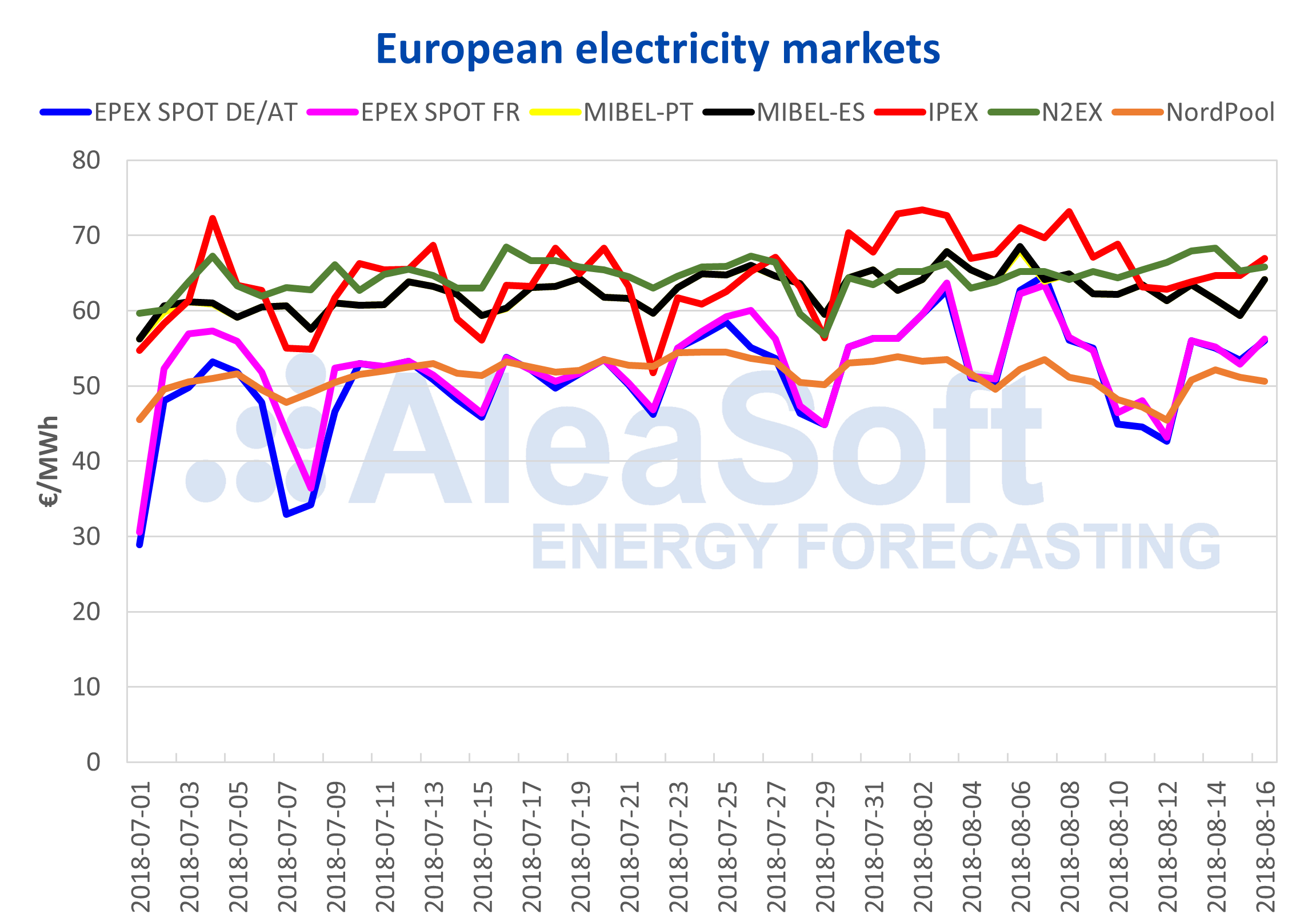 Once the heat wave was over, AleaSoft analysis established an increase in demand in mainland Spain of 11.9% between August 2 and August 8 with respect to the following seven days, once the effect of the festivity of August 15 is corrected.

Water reserves in hydroelectric dams continue to decrease due to the seasonal reduction of water supply to the reservoirs. According to data on Monday, August 13, the available hydroelectric energy decreased by 3.1% compared to the previous week.

According to AleaSoft estimates, wind energy production for this month of August is around 12% below typical values for this time of year.