AleaSoft, August 23, 2018. Again, the prices of the main electricity markets in Europe converge towards the prices of the most expensive markets around 70 €/MWh, and reached record values in some markets. AleaSoft explains that the most important causes are the temperature, which in these days has been higher than the historical average for this time of year, the uncertainty in the nuclear production in France with a large fraction unavailable due to maintenance and the limitations to use water to cool the reactor during very high temperatures periods, in addition to an increase in the price of the fuels used in electricity generation and the CO2 emission rights.

In recent days, the prices of the main European electricity markets have risen to the values ​​of the most expensive markets, around 70 €/MWh. In some markets, the highest average daily price in August in the last 10 years was reached: on August 22, the MIBEL Spain and Portugal markets reached 68.52 €/MWh and EPEX SPOT France 68.02 €/MWh, while in Germany the average price on August 21 was 66.45 €/MWh. According to AleaSoft, these high prices are pushed by several factors: the high temperatures in Europe, 22 nuclear reactors stopped in France that generate fear of new complications with nuclear production, and the high prices of fuels used in electricity generation and the CO2 emission rights. The exception to this price increase in recent days is the Nord Pool market, although it is still registering much higher prices than those typical in the Nordic countries at this time of year. The average price so far this month of August in Nord Pool is 23 €/MWh more expensive than August 2017, an increase of 83%. 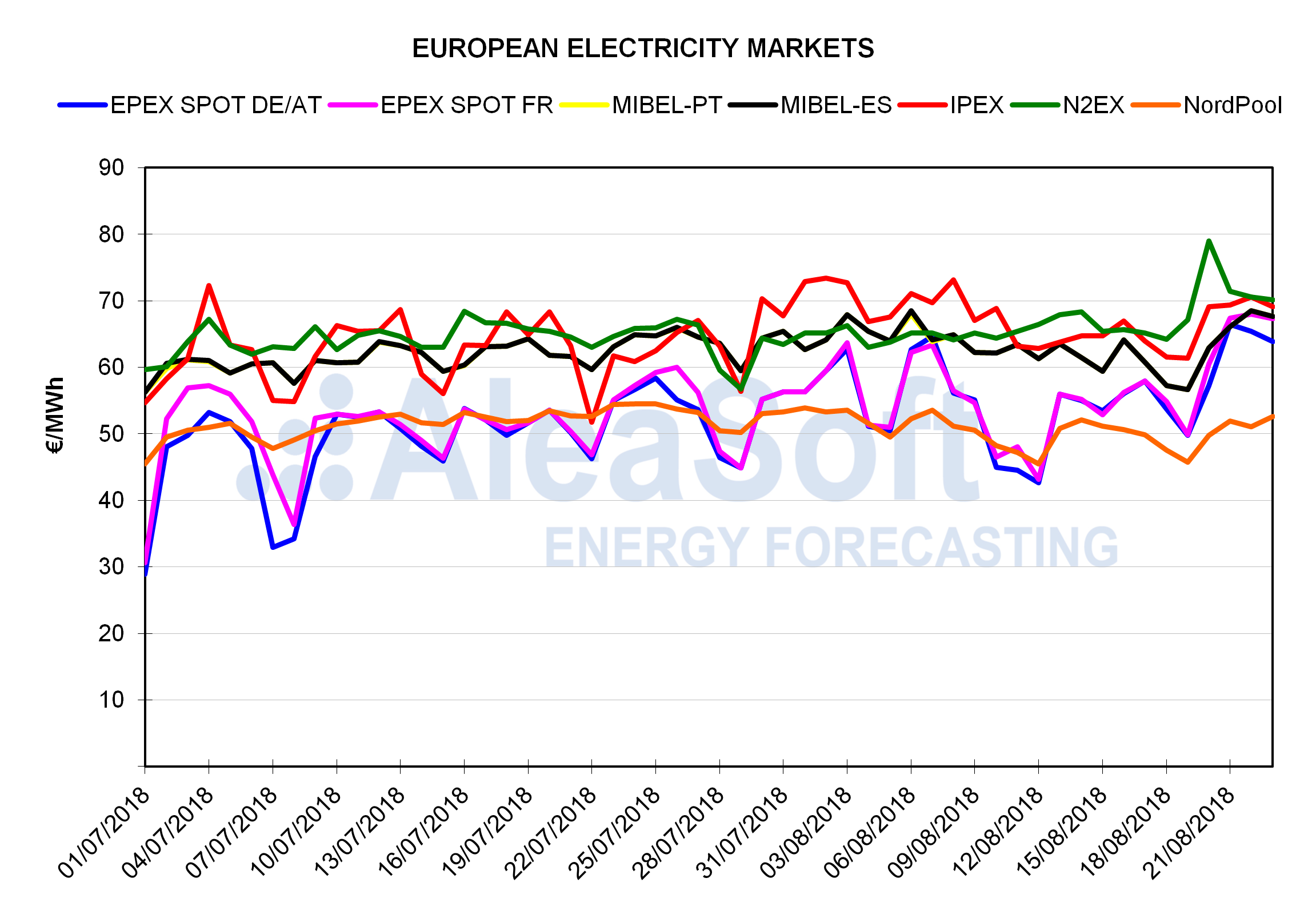 On August 22, the price of the Brent oil barrel for October 2018 rose three percent with respect to the day before due to the publication of the report on the reduction of crude oil reserves in the United States and the announcement of the Organization of Petroleum Exporting Countries (OPEC) of the creation of a production supervision mechanism.

The price of CO2 emission rights continues its unstoppable upward trend and beats a new maximum every day. In the last trading session, on August 22, the reference future for December 2018 was settled at 19.79 €/t, almost 2 €/t over the previous week, on August 15.

The benchmark European coal API 2 continued its bullish path in August reaching $99.20 per ton in the session of August 17, although since that day has gone back to $96.90 yesterday August 22.

In this context, the Spanish electricity futures market OMIP is setting records in recent days. Yesterday August 22, Q4-18 settled at 70.50 €/MWh and the year 2019 at 59.35 €/MWh, the highest prices so far for both products.

The European electricity futures markets are also breaking records. In the EEX market, the German futures for the year 2019 were traded yesterday, August 22, at 48.09 €/MWh, and the French one at 53.10 €/MWh, in both cases, the highest value so far.

According to AleaSoft analysis, the average electricity demand of the first 22 days of the month of August in Spain was greater than the average demand of this month in the last decade. The wind energy production so far this month is the lowest of August since 2015, contrary to the hydroelectric production, where the average of August so far is the second highest of the decade, only behind 2016. For its part, solar photovoltaic and thermal production in August is at medium levels.

AleaSoft estimates that next week the prices of Spain and Portugal in the MIBEL market will continue at high levels, above 65 €/MWh, while uncertainty continues for the nuclear shutdowns in France and the prices of fuels and CO2 emission rights continue rising.