AleaSoft, September 27, 2018. Favorable temperature and wind conditions in the Iberian Peninsula led to a slight drop in the price of the MIBEL electricity market of Spain and Portugal. Meanwhile, the price of gas and coal continues to rise and Brent breaks the $80 barrier and sets 4-year record prices.

The end of last week and the beginning of this week brought a respite for the prices of the Spanish and Portuguese electricity market MIBEL. On Sunday, September 23, the average daily price of the market broke the floor of 70 €/MWh that remained intact since September 9, and remained below it until Tuesday, September 25. According to AleaSoft, this slight and momentary drop in price is due to several factors, on the one hand, the increase of the wind energy production, which registered a peak on Monday, September 24 with values not seen since spring, and the decrease of the demand due to the drop in temperature. And, on the other hand, the stop in the upward race of the price of carbon emission rights.

As we said, reference futures Dec-18 of carbon emissions stopped rising, with a small rebound of 22.43 €/ton on Monday September 24, but far from 25 €/ton registered in September 10, and today they are negotiating around 20 €/ton. Quite the opposite of the price of a barrel of Brent oil that started the week finally breaking the $80 barrier after several attempts since May of this year, and is setting new highs since 2014. Also, the price of the futures of European coal and gas registered increases this week. Gas futures are around 29 €/MWh, and coal futures continue above $100 per ton.

In recent days, the prices of Europe main electricity markets diverged. The price of NordPool returned to clearly lower prices than the rest of the markets, below 40 €/MWh. The EPEX SPOT market in Germany moved away from the French market, which are usually highly coupled, and has been at levels similar to those of the NordPool. In the typically more expensive countries, Italy and Great Britain registered more expensive prices than Spain and Portugal, which had slightly lower prices due to the favorable weather conditions. 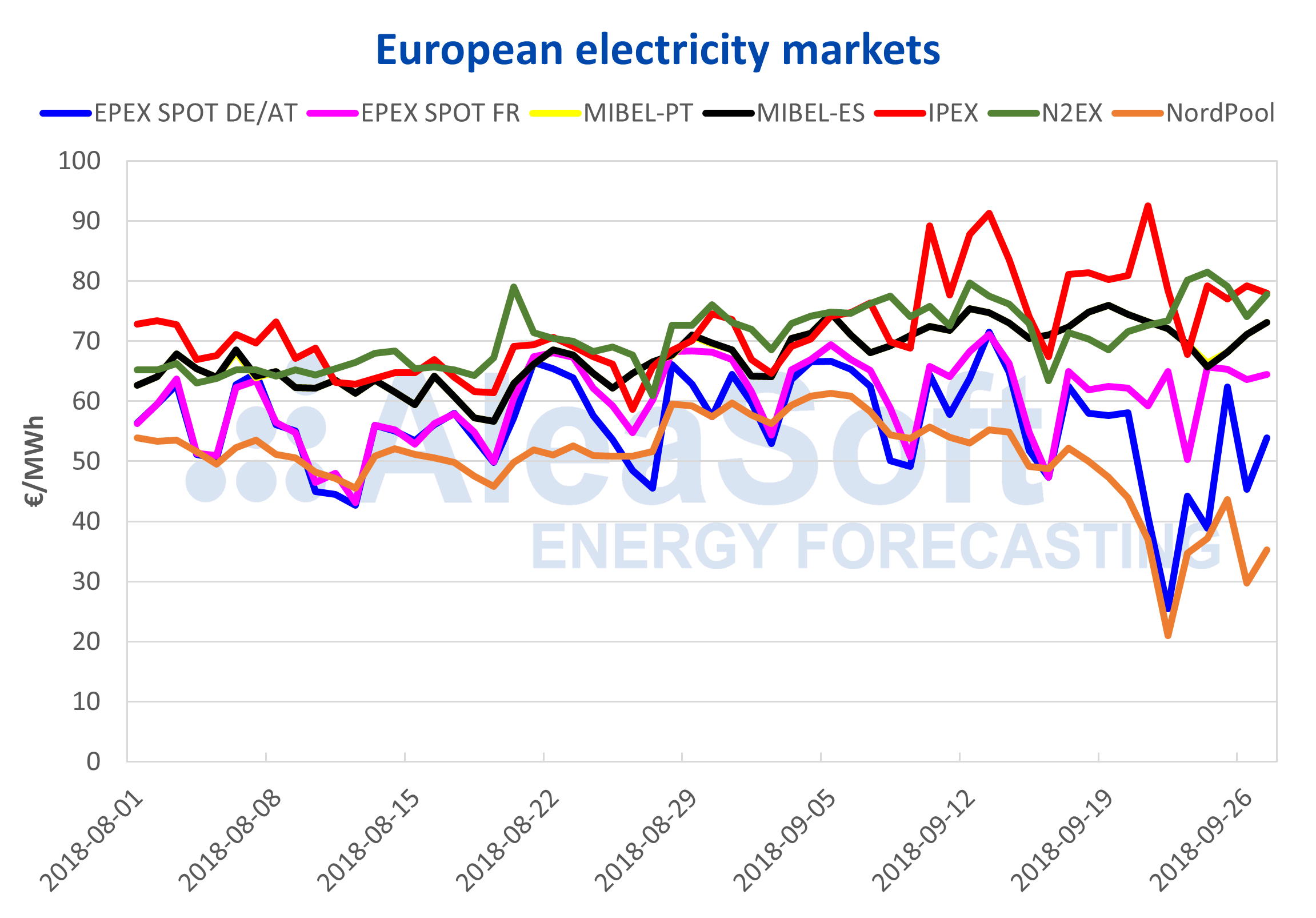 The fall of the temperatures forecasted last week had a 1.5% drop effect in the demand, that helped to moderate the price in MIBEL as predicted by AleaSoft. Even so, the temperatures continue 2.9°C above the typical values of this time of year. For its part, wind energy production experienced a significant increase on Monday, September 24, as indicated by AleaSoft forecasts last week, and is now in the historical average levels for September, that also helped to the relaxation of the electricity market price during this week, as predicted. For the next week of October 1, if the prediction of temperature decrease does not change, the AleaSoft forecast indicates a drop in demand of up to 5%, which would continue to press the price of the electricity market downwards.

PrevAnteriorFALL OF THE ELECTRICITY FUTURES AFTER THE ANNOUNCEMENT OF THE SUSPENSION OF THE 7% TAX TO THE GENERATION
SiguienteTHIRD QUARTER OF MIBEL, ONE STEP MORE TO FINISH 2018 AS THE SECOND MOST EXPENSIVE YEAR IN HISTORYNext
Menu
Facebook-f Twitter Linkedin Instagram