AleaSoft, September 20, 2018. Electricity futures in the Spanish market OMIP fell yesterday, September 19, nearly 1% for the futures of the last quarter of the year, and more than 3% for the futures of 2019. AleaSoft considers that this fall was motivated by the announcement by the government to suspend the 7% tax on electricity generation, since electricity futures in the rest of European countries rose, as did so the price of Brent oil barrel, gas and coal, and the price of carbon emission rights.

In yesterday’s session, September 19, in the Spanish OMIP market, electricity futures for the fourth quarter of 2018 fell by 0.9%, and futures for 2019 did so by 3.1% and fell under 60 €/MWh, level below which they were not seen since August 22. AleaSoft believes that this fall was caused by the announcement by the Spanish government of the upcoming approval of a series of urgent measures to lower the electricity bill, among which is the suspension (or radical reduction) of the 7% tax on the generation of electricity. Because yesterday, with the exception of Spain and Portugal, was a day of price rises in the main futures markets of electricity in Europe.

The price of gas and coal also rose yesterday: 3.3% for gas and 2.7% for coal. Carbon emission rights rose a notable 6.1%, and continue their recovery after the sharp drop of 18% of last Thursday, September 13. The price of a barrel of Brent oil continues to hover around the $80 barrier but did not exceed it. Yesterday it settled at $79.40 a barrel.

For its part, the spot prices of electricity in the MIBEL market of Spain and Portugal in recent days have broken a new annual record, as it has been usual in recent weeks: on Wednesday September 19 a price of 75.93 €/MWh was recorded. It is worth noting the high prices recorded during weekends. The two most expensive Sundays of this 2018 were, and by far, those of September 16 and 9.

In the rest of European markets, prices also continue recording high values. The group of the most expensive countries, which includes Spain, Portugal, the United Kingdom and Italy, is between 70 and 80 €/MWh. France and Germany are around 60 €/MWh. And the NordPool for its part dropped from below 50 €/MWh and is already close to 40 €/MWh. 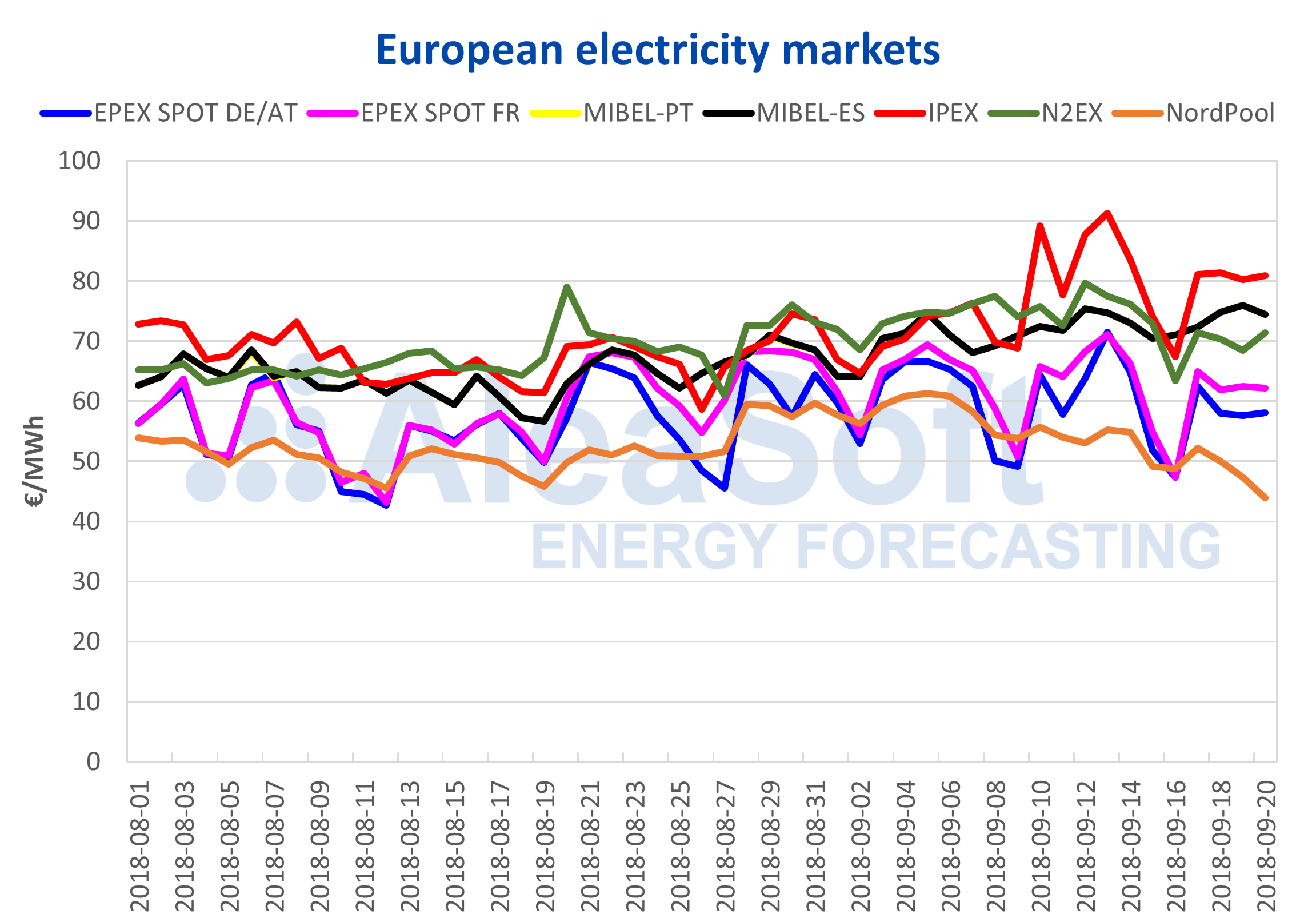 According to the forecasts made by AleaSoft, for next week, of September 24, the temperatures, which in the last seven days have been 2.5°C above normal by this time of year, will go down and consequently also will the demand for electricity. If the current forecasts of increase in wind energy production do not change and the price of carbon emissions does not explode again, all this could lead to a drop in the price of the electricity market for next week.