AleaSoft, October 18, 2018. The week has been marked by Alcoa’s announcement of the closure of two of its aluminum production plants due to the high cost of electricity. On the other hand, the prices of CO2 and fuels are falling. According to AleaSoft, this decrease in fuels and CO2, lower demand for electricity and the publication of Royal Decree-Law 15/2018 are the reasons why the price of electricity in the Spanish market has also fallen.

This week, which began on October 15, has been marked by Alcoa’s announcement that it is planning the closure of two aluminum production plants in Spain due to the high cost of electricity. As AleaSoft has stated on multiple occasions, the electricity market, despite the possible deficiencies it may have, has been playing an important role in these twenty years since its creation. From its self-correction, if electricity prices go up, inevitably it will cause a drop in demand, and vice versa.

On the other hand, the price of the futures of the CO2 emission rights has followed a path of decreases that started from their maximum registered on September 10 of 25.24 €/t. This week, from October 15, the reference price of the EUA for December had fallen to 18.59 €/t, which is 26% less. On a monthly basis, prices have gone from an average of 21.47 €/t in September to 20.51 €/t in October so far, which represents a reduction of 4.5%.

Brent oil, coal and gas prices have also maintained a downward trend since October began. In yesterday’s session, of October 17, the price of Brent futures for December this year fell 3.7% compared to the session held a week ago, on October 10. The European coal futures API 2 for October 2018 and those of the European gas for November 2018 fell by 1.4% and 1.1%, respectively, in the session of yesterday, October 17, compared to those traded in the session on October 10.

In the last twelve days, since October 7, the Spanish daily market price has decreased 8.2% compared to the previous 12 days. According to AleaSoft, lower demand for electricity, lower fuel prices and CO2 emission rights and the publication of Royal Decree-Law 15/2018 with urgent measures to reduce the electricity bill are the causes of this price decrease. 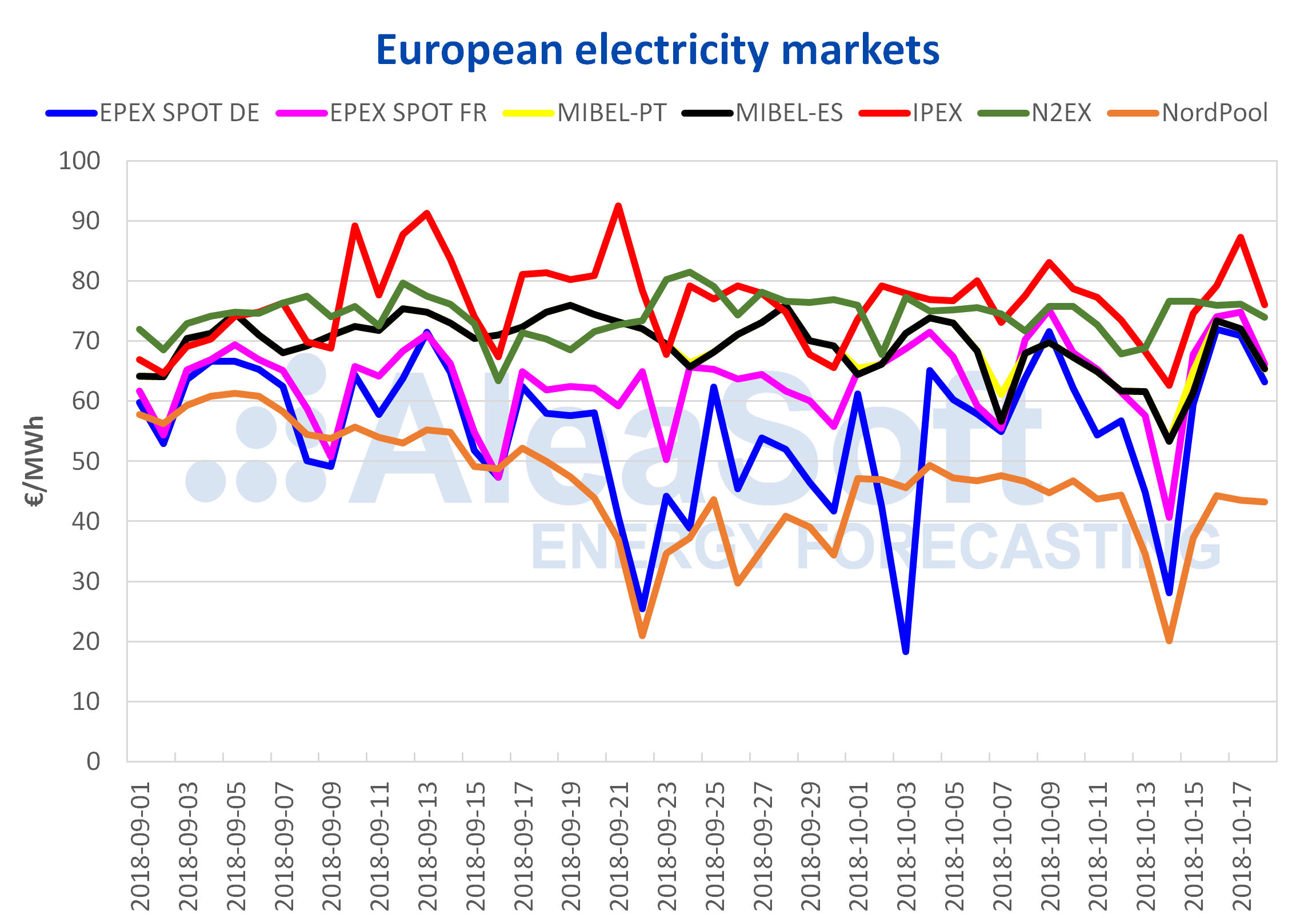 Since the beginning of October, the prices of the MIBEL Spain and Portugal and the EPEX SPOT France markets have begun to converge between 64 €/MWh and 65 €/MWh. The NordPool market of the Nordic countries remains the cheapest among the main European markets and, in the last seven days, since October 12, it has dropped by 8.03 €/MWh compared to the previous seven days. In general, the prices of the main European markets have fallen compared to the previous seven days, and the Italian market IPEX and the British N2EX remain the most expensive ones.

In the coming days with the cold front that crosses the peninsula, with precipitation and more wind, the trend of short-term electricity market price is downward. The average price of the last ten days, between October 9th and 18th has been 65.07 €/MWh and AleaSoft estimates that the average price between October 19th and 28th will be 63.92 €/MWh, a decrease of 1.8%.