AleaSoft, February 26, 2019. Germany is the first country in terms of expansion and implementation of renewable energy for the production of electricity. An aggressive policy of energy transition, the Energiewende, placed it as the European leader in renewable energy. AleaSoft analyses the success and also the consequences of the German energy transition.

Germany and France are the two main electricity markets in Central Europe. Both markets are large producers of electricity that export to all the countries around them, and because of this, they usually have the lowest prices of the markets of the central-west part of the continent. But Germany and France have a very different energy mix. While France produces three quarters of its electricity from nuclear energy, Germany covers its production largely with coal. The dependence on coal is one of the reasons why Germany wanted to be a reference in the revolution of renewable energies, although it has achieved it with very relative success, and at a very high cost.

The price of the German wholesale electricity market has been the lowest one in recent years, with the sole exception of the Nord Pool market of the Nordic countries. In the last two years, between 2016 and 2018, the price of the German electricity market EPEX SPOT rose by 53% up to 44.47 €/MWh on average during 2018. According to AleaSoft, production with coal, which is the technology that sets most of the marginal prices of the German market, exposes the market price to the increases in the prices of coal and especially of the CO2 emission rights. Between 2017 and 2018, the average price of EUA CO2 emission rights tripled with an increase of 171%. For its part, the price of API 2 coal increased by 10%. The evolution of the price of coal has been parallel to the price of oil and other fuels such as gas. The price of a barrel of Brent oil from the North Sea increased by 32% between 2017 and 2018, the same increase that the European TTF gas suffered. 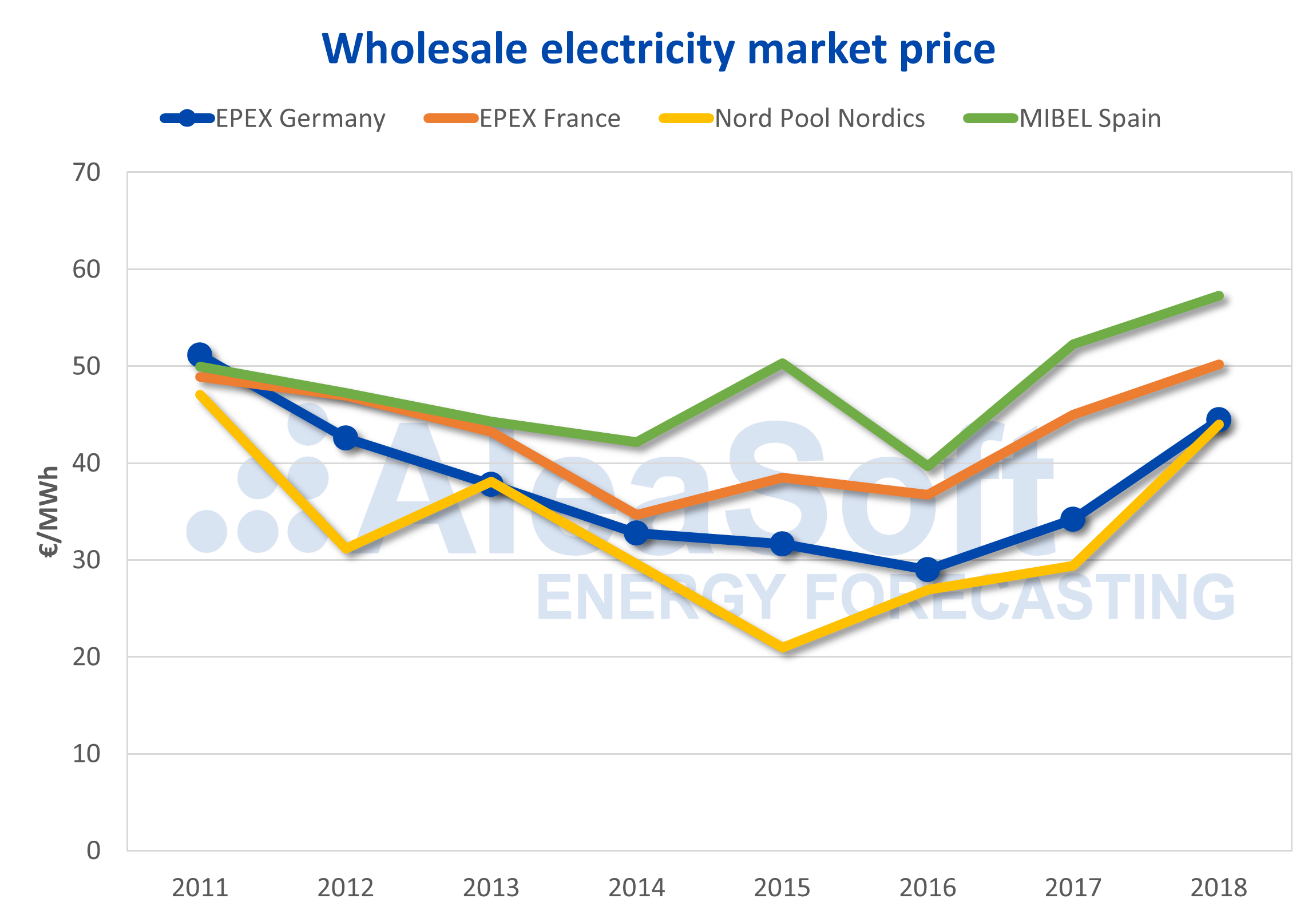 Germany is a large exporter of electricity. The fact of having the lowest market price in the centre of the continent makes it the ideal country from which to import electricity. During 2018, the balance of international electricity exchanges with connected markets was mostly exporter by Germany, with the only two exceptions being France, another large electricity exporter, and Sweden, which, as a Nordic country, had a lower market price. Overall, Germany imported 20 302 GWh from its neighbouring countries during 2018, while it exported 69 976 GWh, what meant an export balance of 49 673 GWh. 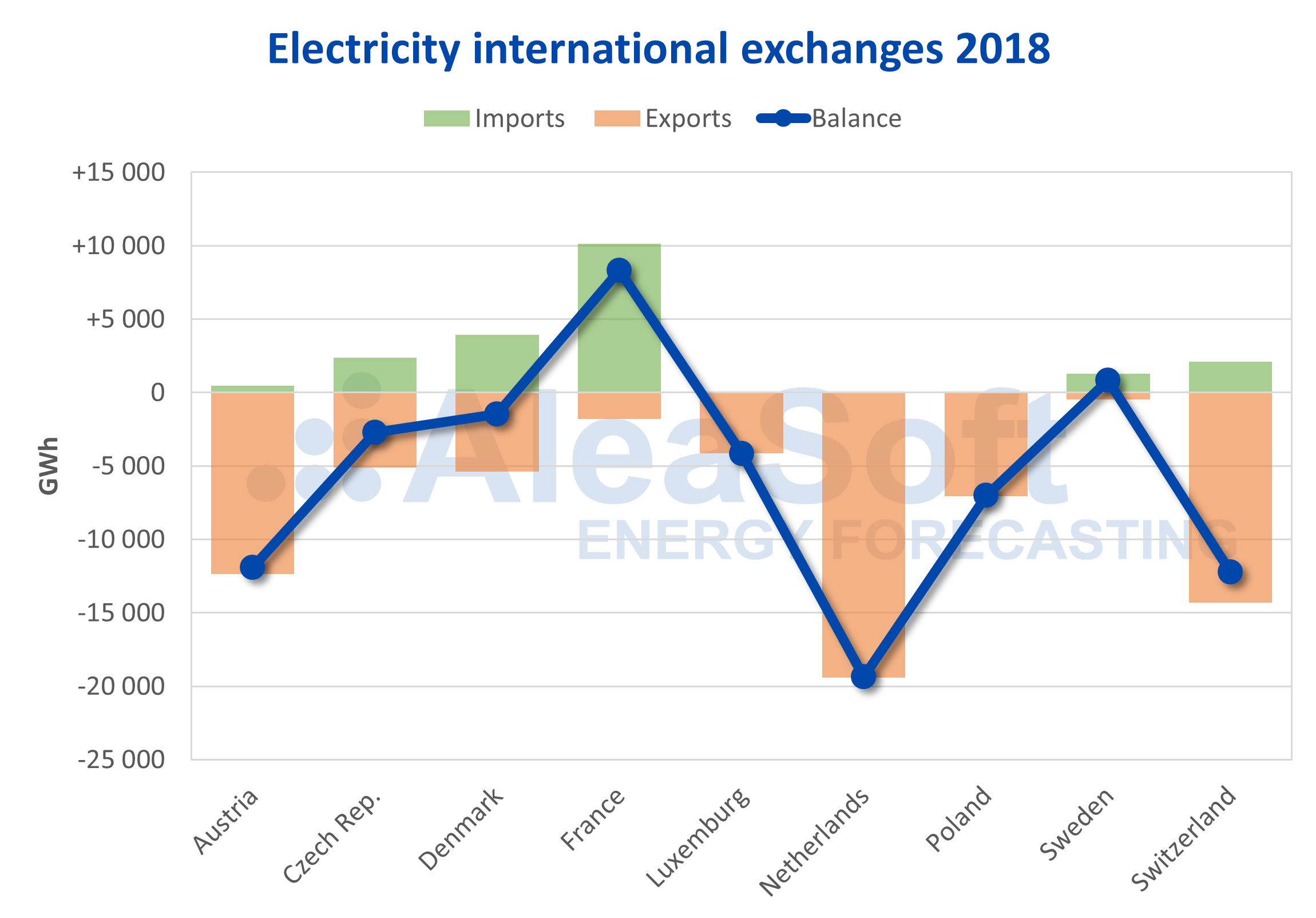 The paradox of the case is that, even having a wholesale market with a very low price compared to the rest of the continent’s markets, Germany has the second most expensive electricity bill in the European Union, according to Eurostat.

The key lies in the German energy transition, the Energiewende, which has the ultimate goal of producing all energy from sources of renewable origin, increasing energy efficiency and reducing its emissions of CO2 and other greenhouse gases. For this, the German government has planned the shutdown of all nuclear power plants, the last ones in 2022. And the closure of all coal plants before 2038 at the latest, according to the recommendations of a commission of experts consulted by the German government. This energy transition plan has a high cost that directly affects the price of the final electricity bill. The costs include renewable energy aids, plans to dismantle nuclear power plants and aid to regions affected by the closure of thermal power plants and coal mines.

The production mix in Germany has been dominated in recent years by coal-fired production. Although it has decreased in recent years. It was practically half of the mix in 2005, but in 2018 it had a share of 38%. Nuclear production has been decreasing at the same rate as the plants are closing, in 2018 the nuclear plants generated 71 809 GWh, which meant 14% of the total national production. The production of electricity from renewable energies accounted for 39% of all electricity produced in 2018 and represented an increase of 2.4 percentage points over 2017, but it is still far from the target of 65% by 2030. Among the renewable energy, wind energy highlights, covering 21% of all electricity production. Behind are the solar photovoltaic, with 7.8%, and biomass, with 7.6%.

Electricity demand in 2018 increased by 3.1% and it was the fourth consecutive year of increase since 2014, when demand bottomed after a continuous decline since 2010. 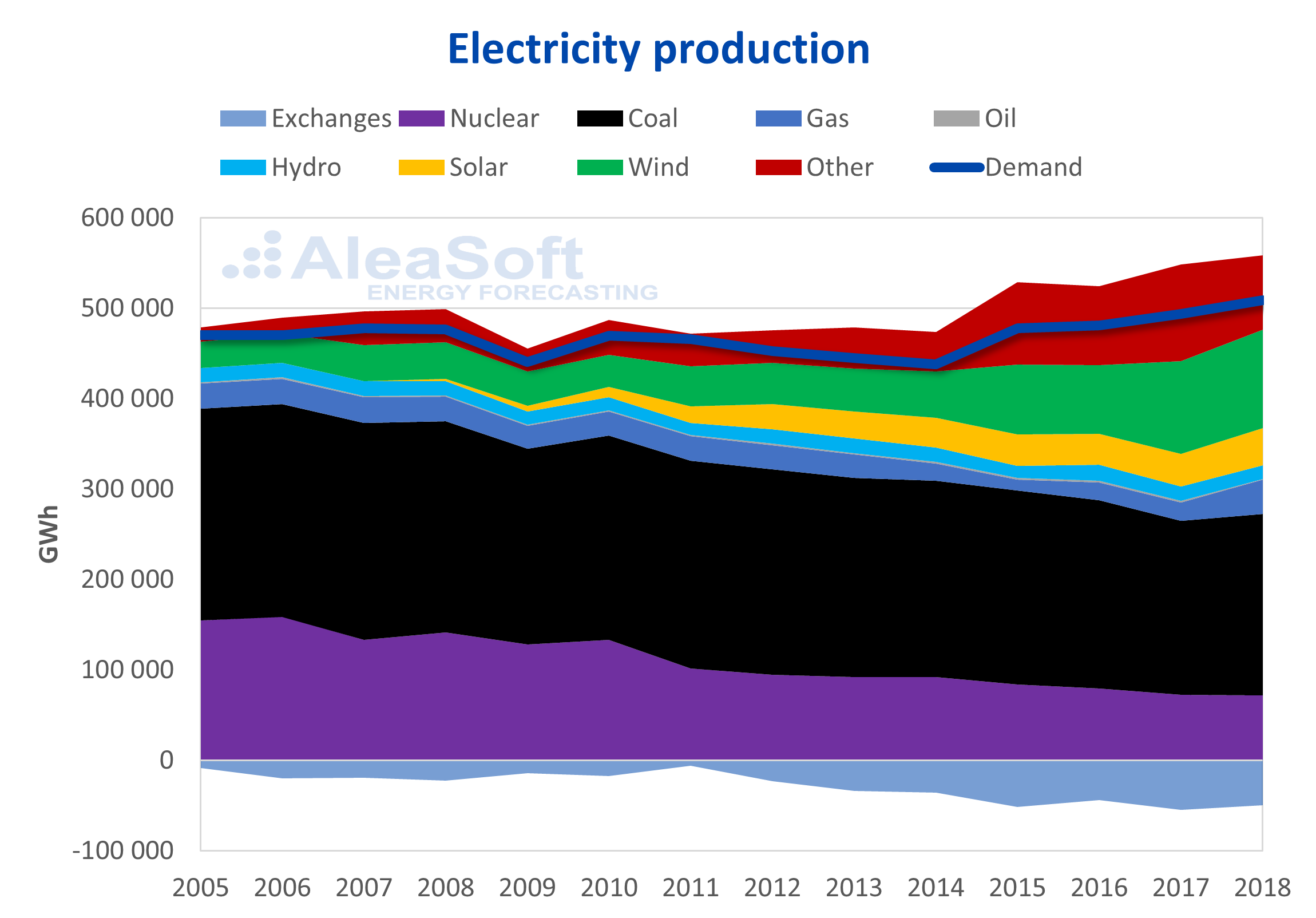 Currently, renewable capacity already accounts for more than half of the German production park with 56% of the total installed capacity. The most widespread technology is wind energy with 59 GW that represents 27% of the total capacity of the country. Wind energy is also the technology with the highest growth in recent years, going from 20% in 2015 to 27% nowadays. Currently installed solar photovoltaic capacity amounts 43 GW, 20% of the national capacity. Although photovoltaic capacity has increased by 16% in the last five years, its share in the global production park has remained stagnant just below 20%. 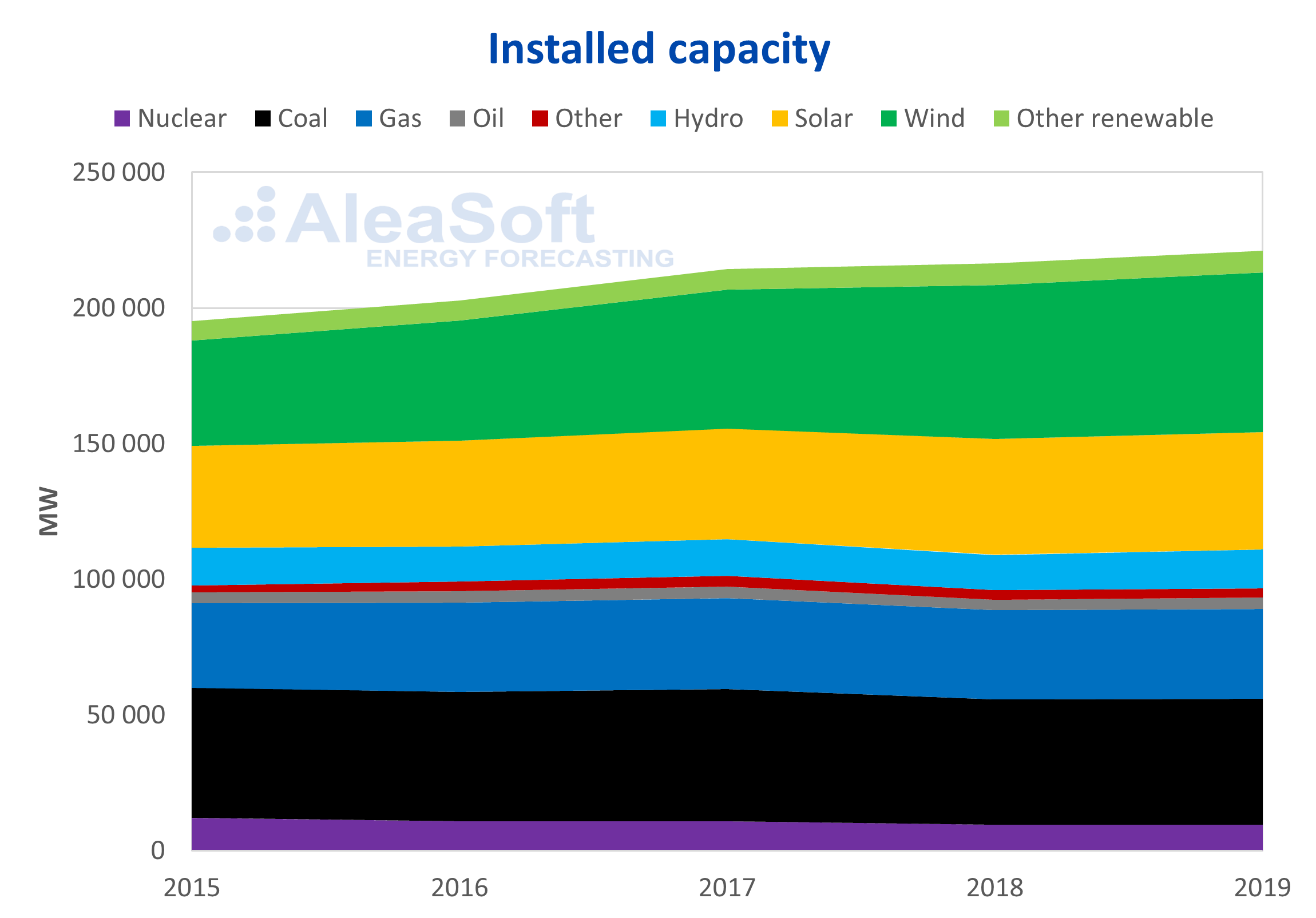 The thermal coal park with 46 GW represents 21% of the total capacity of Germany, and has remained very stable in recent years. At the moment, the German nuclear shutdown continues at the expected pace, and the gap left by the nuclear power plants in the production mix has been filled with renewable production, but also with coal. The coal is being the main thermal backup, more than gas, when the intermittency of wind and solar energy cause the renewable energy production to fall and leave a very large thermal gap given the volume of the national demand, as shown in the graph “Electricity generation per technology” that appears below. This meant that Germany has not been able to reduce its levels of CO2 emissions as intended, and it seems difficult that they can reach the reduction targets by 2030. 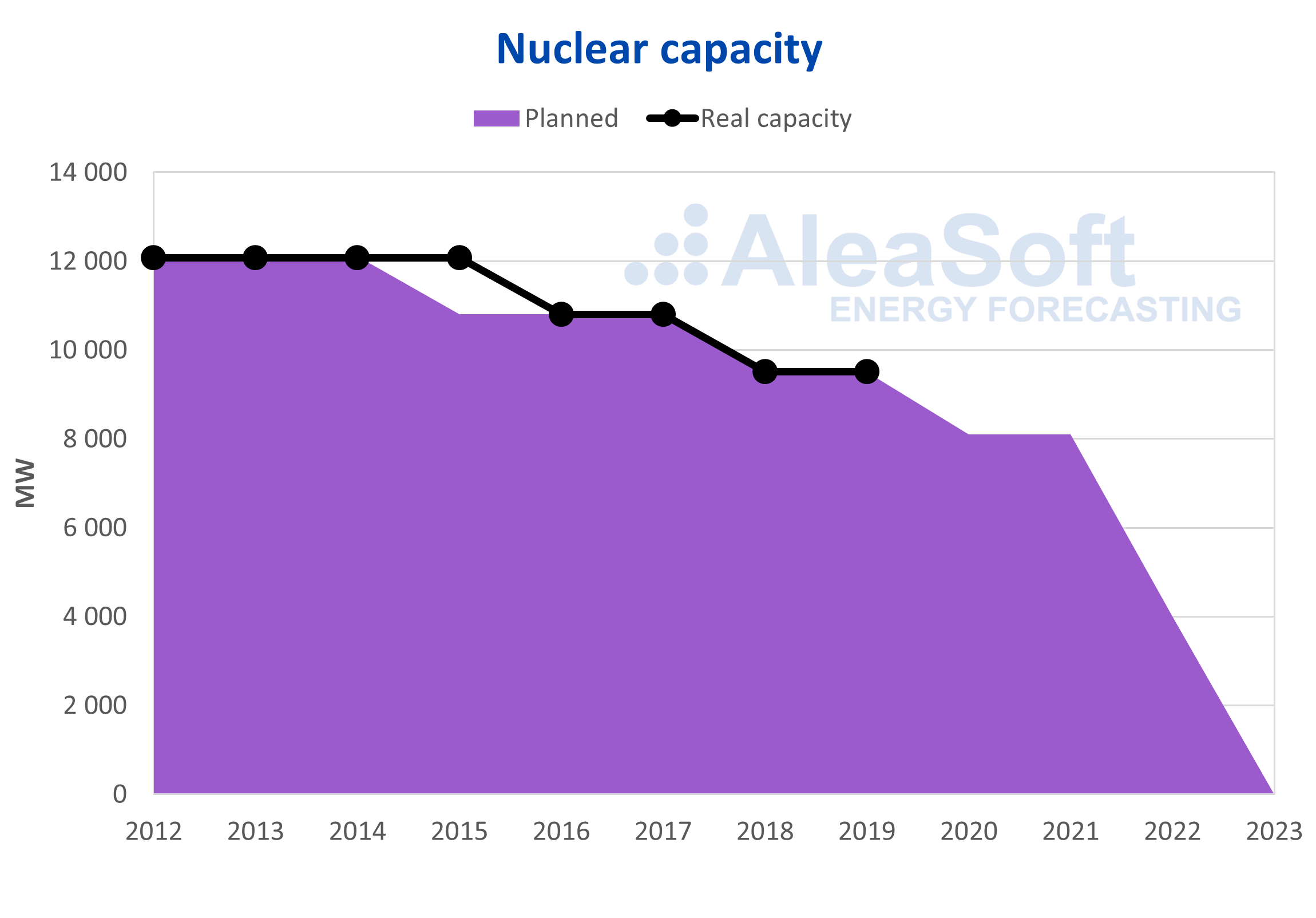 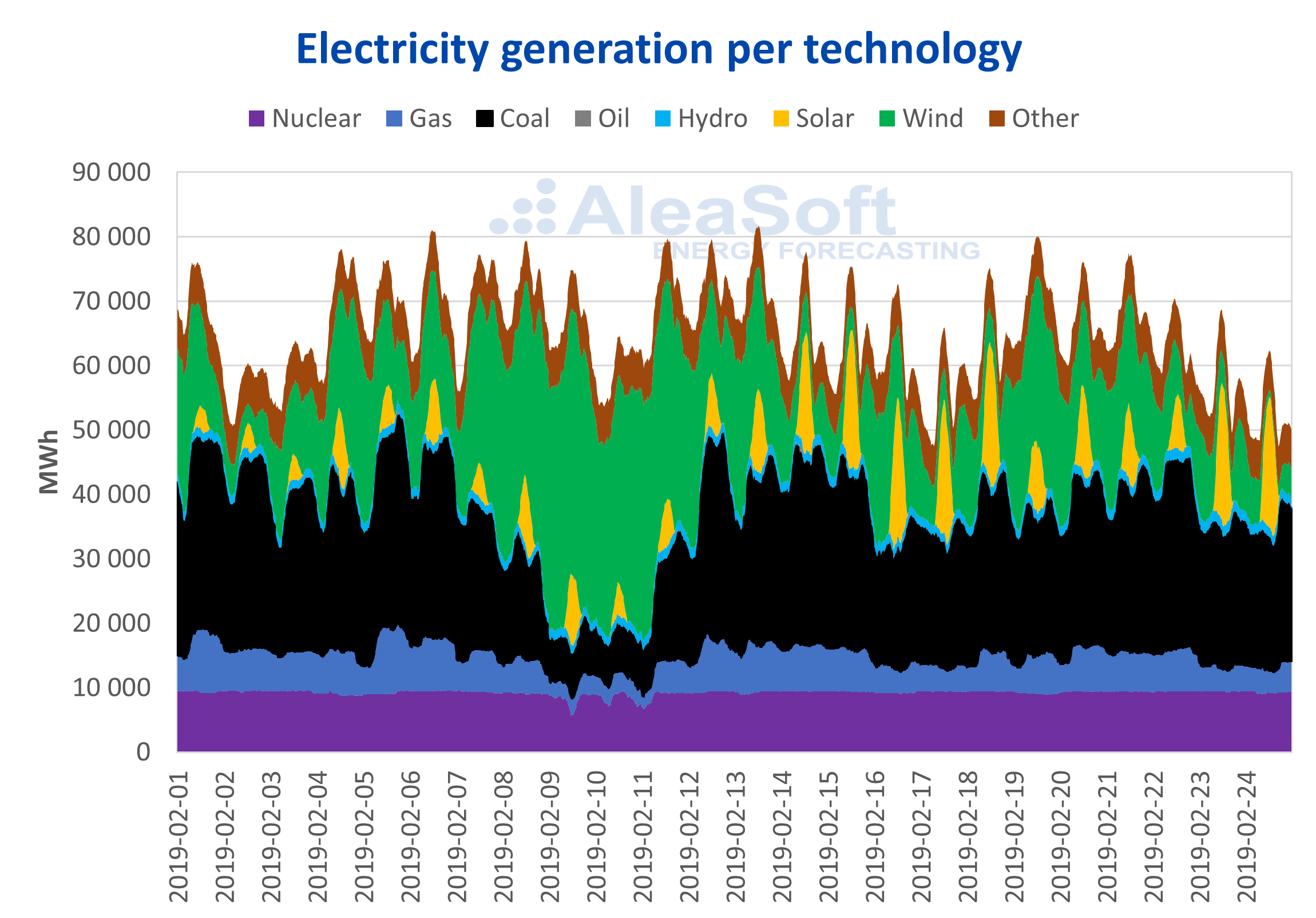 Another key element of the German energy transition is the increase in energy efficiency and the reduction of the electricity demand. Germany has become in recent years the European paradise of electricity self-consumption. In 2018, the number of 100 000 self-consumption installations with batteries was reached, thanks in large part to government aids for this type of facility, another expense that has helped to increase the electricity bill for all consumers. And this cost is one of those that the government plans to cut, which will undoubtedly slow down the expansion of self-consumption, will result in a lower reduction in CO2 emissions and, finally, will make it more difficult to achieve the environmental goals by 2030.

Germany has been the main European benchmark in the energy transition and the adoption of renewable energy. And surely it will continue to be, but a change of this magnitude is not easy, and in a field where decisions are sometimes made taking into account more political variables than technical ones, reality presents a battle. The nuclear shutdown is putting a strain on the German electricity market, which can now only replace that production with coal-fired power plants. If the renewable capacity does not increase fast enough in the coming years while the thermal capacity of coal decreases, the price of the electricity market may suffer important increases, according to AleaSoft.