AleaSoft Energy Forecasting, October 19, 2022. In the week of October 10, prices decreased in the French, Spanish, Portuguese and Italian markets. The largest drop was that of the IPEX market, of 11%. In the rest of the European electricity markets, prices increased compared to the previous week, despite the drop in gas prices. The largest rise in prices was that of the German market, of 32%. In the first three days of the third week of the month, decreases were generalised to all markets favoured by the decrease in gas prices. In the week of October 10, prices of most European electricity markets analysed at AleaSoft Energy Forecasting increased compared to the previous week. However, prices decreased in the MIBEL market of Spain and the EPEX SPOT market of France by 8.6%. They also fell in the MIBEL market of Portugal and the IPEX market of Italy, by 8.8% and 11% respectively. On the other hand, the highest price increase was that of the EPEX SPOT market of Germany, of 32%, while the lowest was that of the Nord Pool market of the Nordic countries, of 11%.

In the second week of October, the highest average, of €255.88/MWh, was that of the Italian market. On the other hand, the lowest weekly average was that of the Nordic market, of €66.63/MWh. In the rest of the markets, prices were between €138.34/MWh of the Iberian market and €224.31/MWh of the French market.

Although MIBEL market prices were among the lowest due to the application of the gas price cap in this market, some consumers paid a higher price as compensation for this limitation in gas prices. In the week of October 10, the average of this price fell to €199.02/MWh in the Spanish market, a value 14% lower than that of the previous week.

On the other hand, the average of the first three days of the third week of October was lower than the average of the second week of the month in all analysed European electricity markets, with the largest decrease being that of the N2EX market of the United Kingdom, of 33%. The lowest average, of €62.03/MWh, corresponded to the Nord Pool market. In contrast, the highest price, of €202.47/MWh, was that of the Italian market.

Regarding daily prices, on Wednesday, October 19, they decreased compared to the previous day in all markets, falling below €100/MWh in several of them. In the case of the Italian and British markets, the prices were €175.77/MWh and £62.07/MWh, respectively. In both cases, these prices were the lowest since the first half of June.

During the week of October 10, the 22% drop in the weekly average price of gas compared to the previous week exerted its downward influence on electricity markets prices. However, the increase in electricity demand, the general decrease in solar energy production and the drop in wind energy production in markets such as Germany led to price increases in most markets. On the other hand, the increase in wind energy production in the French, Portuguese and Italian markets favoured the decrease in prices in those markets. In the case of Spain, the drop in demand, influenced by the holiday of October 12, allowed prices to fall in this market too.

The AleaSoft Energy Forecasting’s price forecasting indicates that in the whole of the third week of October European electricity markets prices might decrease influenced by increases in wind energy production in most markets as well as by the evolution of gas prices. 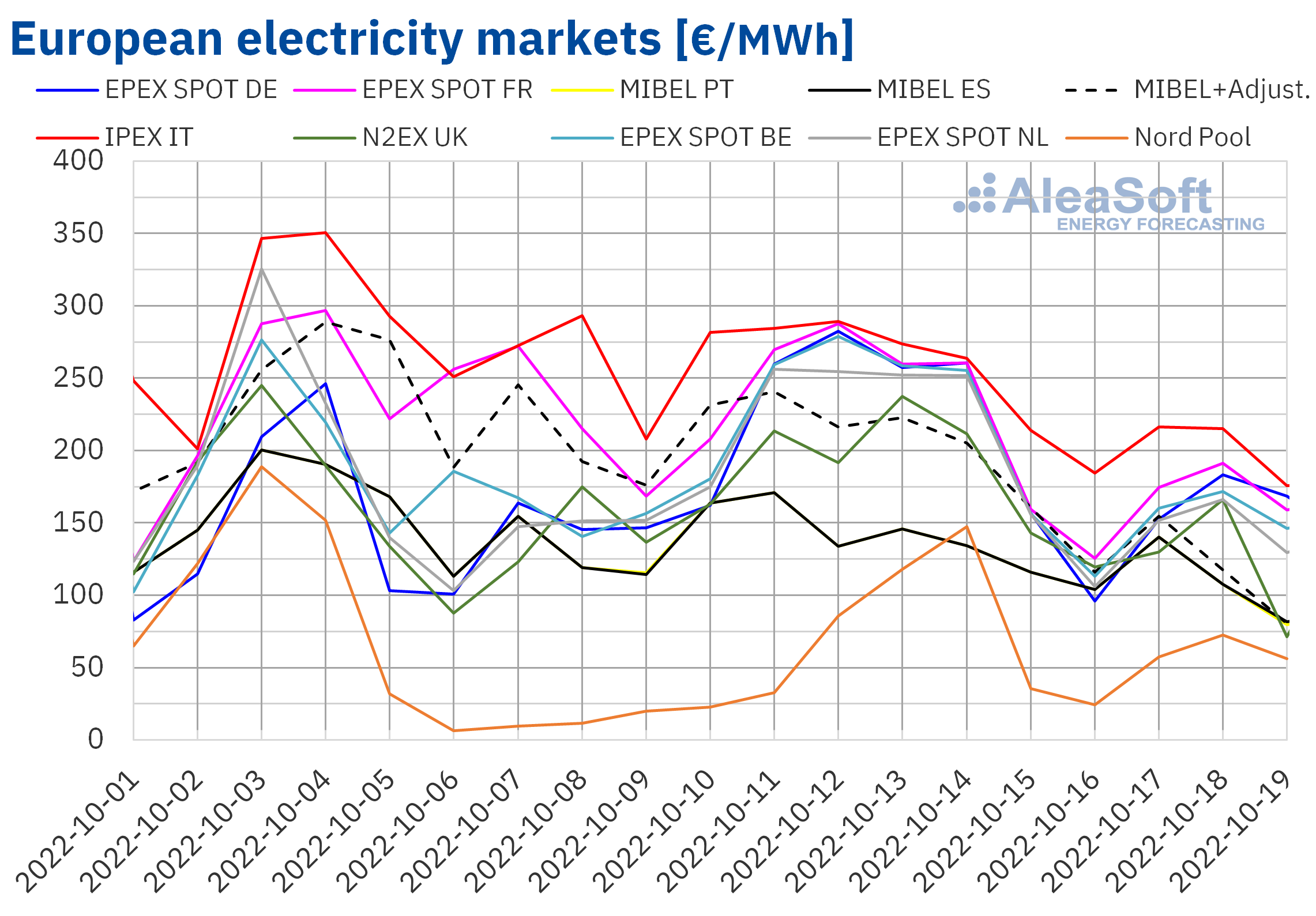 On October 20, the webinar of AleaSoft Energy Forecasting and AleaGreen “Energy markets amid the gas supply crisis” will take place. As in the October 2020 and 2021 editions, speakers from Deloitte will participate: Álvaro Antón Azcoiti, Director, Financial Advisory; Ricardo Benito Pascual, Director, Financial Advisory and Luis Garcia Tasich, Manager of Global IFRS and Offerings Services (GIOS). Oriol Saltó i Bauzà, Associate Partner at AleaGreen, will also participate as a speaker, and Antonio Delgado Rigal, CEO of AleaSoft Energy Forecasting, will join the discussion table after the Spanish version of the webinar. The webinar will analyse the renewable energy projects financing and the importance of the forecasting in audits and portfolio valuation, topics in which Deloitte has extensive experience. In addition, as usual in this series of monthly webinars, the evolution and prospects of European energy markets will be analysed.