AleaSoft, March 18, 2019. AleaSoft analyses the behaviour of the European fuels markets, CO2 emission rights and electricity, in a week in which the trend of the previous week continues with high wind energy production and with lower prices in the main electricity markets of the European continent.

The Brent oil futures prices for May 2019 in the ICE market continue as in the previous week, stable in a price range between 65 $/bbl and 67 $/bbl since February 15. In recent days, prices have been slightly above 67 $/bbl, but without a clear trend to reach the 67.55 $/bbl of Wednesday March 13, which is a value that has not been reached since November 19 last year. The International Energy Agency’s forecasts of a possible oil deficit in the second half of 2019, together with the political instability in Venezuela and the possibility that OPEC countries could extend their production cuts, are keeping the Brent prices in these levels and with the possibility that the slight upward trend of the last days will continue during the week.

The TTF gas futures in the ICE market for April continue a downward trend since September 25, 2018, almost six months ago, when they reached a maximum price of 26.50 €/MWh, while on Friday last week, March 15, they settled at 15.25 €/MWh, which is the lowest value of the last two years. In a week, the TTF gas futures for April fell 1.50 €/MWh and, with this significant downward slope, in AleaSoft it is considered that prices should continue to fall below 15 €/MWh, taking into account the arrival of spring with higher temperatures and lower electricity demand. At the moment, the situation of instability in Algeria is not influencing gas prices.

As stated in previous AleaSoft’s comments, the evolution of API 2 coal futures prices for the month of April in the ICE market remained much aligned with the TTF gas futures prices for the same period. At the beginning of October last year, coal prices reached over 100 $/t; at the moment, at Friday March 15 close, the API 2 coal futures price for April came down from 70 $/t, reaching 69.65 $/t. Values below 70 $/t were not seen since the beginning of August 2017. From October 2018 to the current date, the decline has been more than 30 $/t. According to AleaSoft’s analysis, taking into account the parallel evolution of gas and coal prices, the coal price can continue falling to levels of 60 $/t in the coming weeks, reaching values of two years ago.

During this month of March, in the evolution of CO2 emissions rights futures prices for the reference contract of December 2019 in the EEX market, there are prices oscillating between 22 €/t and 23 €/t in a stationary way. The settlement price on Friday was 22.47 €/t and this value corresponds to the equilibrium value of this year 2019 that is close to 22 €/t and that in AleaSoft it is considered as a reference for the coming weeks with a trend to go down to 20 €/t.

The prices of electricity markets in Europe have had a pattern of slight decline that continues since early February. In March, temperature and electricity demand were generally stable to date. As raised by AleaSoft in previous comments, with the spring arrival the temperatures will go up and the demand will go down. The slight drop in prices since February is due to the decrease experienced by fuels and CO2. It was also influenced by relatively high wind energy production and solar photovoltaic and solar thermal energy production that is increasing as there are more sunshine hours.

In the evolution of prices of the main European electricity markets this week, the same three strips of previous weeks are observed. In the highest strip there are the N2EX market of the UK and the Italian IPEX market with prices between 50 €/MWh and 60 €/MWh. These prices will remain stable for the next few days.

The MIBEL market in Spain and Portugal is in the middle strip with values around 50 €/MWh and, as we previously stated, this value of 50 €/MWh may be a trend for the coming days. In the AleaSoft’s analysis of last week, the prices of Spain and Portugal were in the highest price strip. The fall to the middle strip was due to higher wind and solar energy production, although we must also consider the temperatures increase in spring.

In the strip with lower prices there are two groups. The EPEX SPOT market of the Netherlands and the Nord Pool market of the Nordic countries continue with average values of 40 €/MWh, while the EPEX SPOT markets of France and Germany have the lowest prices with an average for the last days of around 25 €/MWh. In the case of Germany, it fell to 0.43 €/MWh and France to 8.76 /MWh on Sunday, March 17. Belgian prices in recent days were also very low, although not as much as France and Germany, reaching 13.33 €/MWh on Sunday 17. The prices of this lower strip should rise in the next few days.

In the AleaSoft’s forecasts for the next few days it is expected that temperatures will drop a bit, but in general the demand will not be affected at European level, maintaining the stability with the arrival of spring. As in the previous week, for the last week of March and for April, temperatures will gradually rise and demand will continue with the seasonal decrease.

During the past week of March 11, the electricity futures for April 2019 in the European markets had a general downward trend, with the exception of the Spanish futures, in the OMIP and EEX markets, which at the beginning of the week went up after the Minister for Ecological Transition, Teresa Ribera, announced that the suspension of the 7% tax to the electricity generation that was approved in October last year with a duration of six months will not be extended, and the futures of Portugal in the OMIP market, which also rose due to the rise in Spain prices. In the other markets, the settlement price on Friday, March 15 was between 2 €/MWh and 4 €/MWh lower than that of the Friday, March 8 session.

In the French, German and Italian markets, the settlement price on Friday, March 15 for April future is the minimum since this product is traded.

The wind energy production continued high from March 10 to 16, maintaining the pattern that began at the beginning of this month.

For next week in AleaSoft it is foreseen that wind energy production will decrease in France and Germany, and that it will remain similar in the rest of European countries. 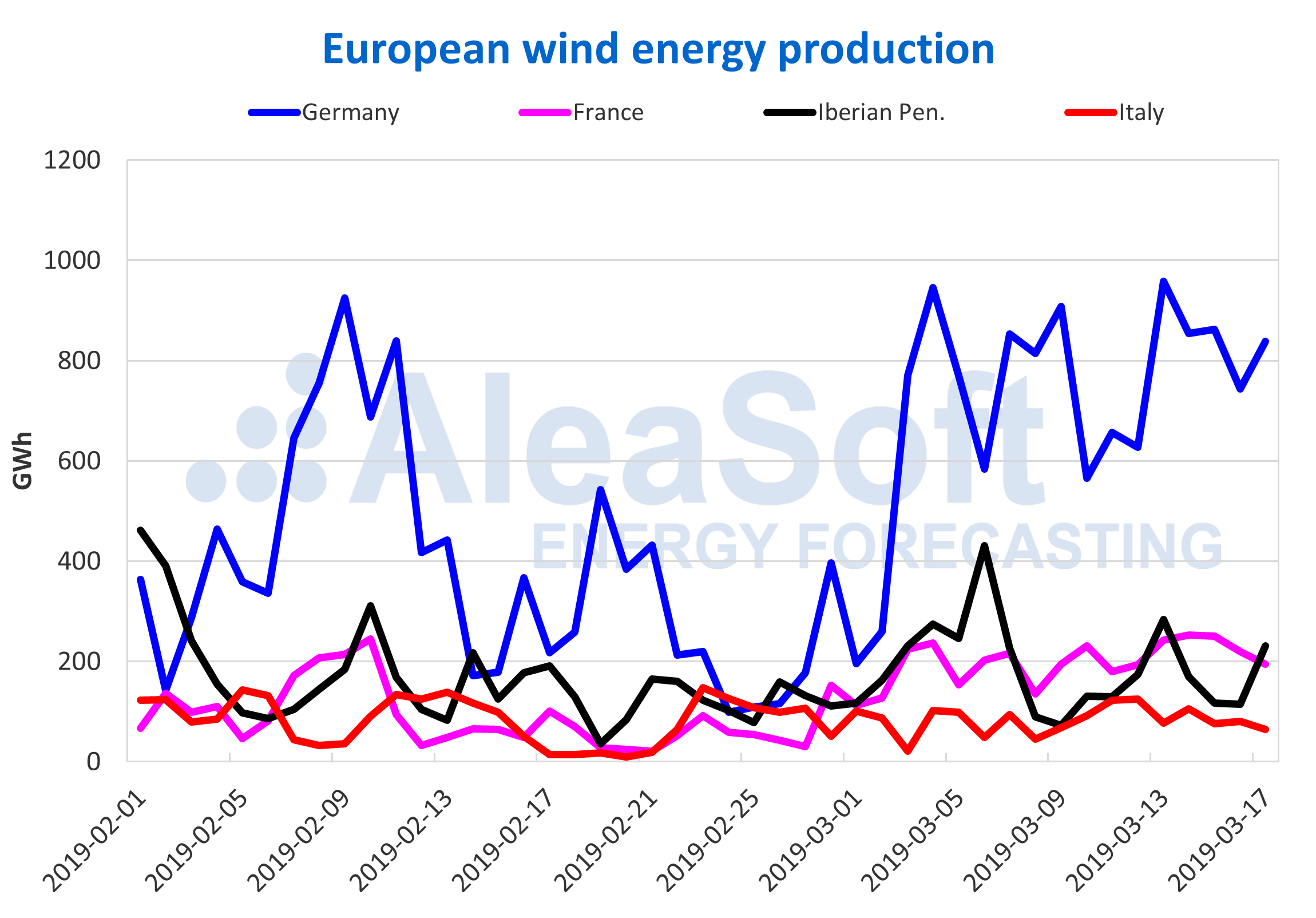 The solar energy production, which includes both photovoltaic and solar thermal technology, was high in the week of March 10 to 16. According to AleaSoft, in the case of Germany an increase in solar energy production is expected for the rest of March; for the Iberian Peninsula and for Italy it will remain at the same levels.

In general, as there are more sunshine hours, the tendency to the solar energy production increase will continue until summer. 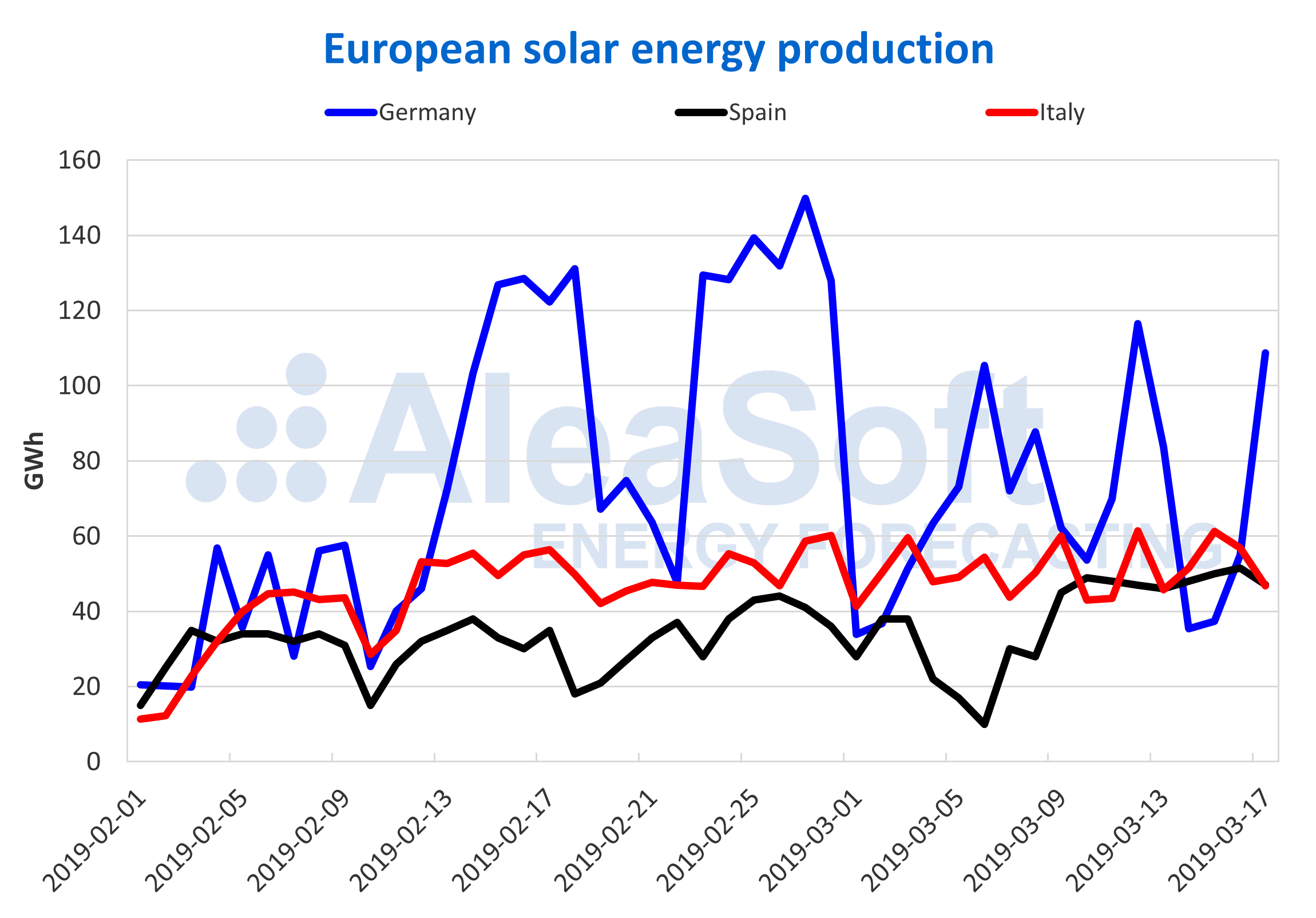