The MIBEL market price continues among the highest in Europe

The price of the Iberian electricity market MIBEL continues among the highest in Europe. The average daily price was the highest of the main European electricity markets on March 11, with 51.89 €/MWh for Spain and Portugal, and March 12, with 52.04 €/MWh for Spain and 52.06 €/MWh for Portugal. In the first four days of this week of March 11 the average price of the Spanish market increased by 11% and that of Portugal by 8.7%, if compared with the average price of the corresponding days of last week. In the first three days of this week, the Iberian wind energy production decreased by 40%, which led to the increase in prices, according to the AleaSoft analysis.

In the rest of Europe, there are other markets where the price increased in the first four days of this week, such as the EPEX SPOT Germany, with an increase of 16% and the EPEX SPOT France, with an increase of 3.2%. In both countries, wind energy production so far this week is maintaining a level relatively similar to last week. Even with this increase, the price of the German market was the lowest in Europe between March 11 and 14, with an average price of 31.46 €/MWh. 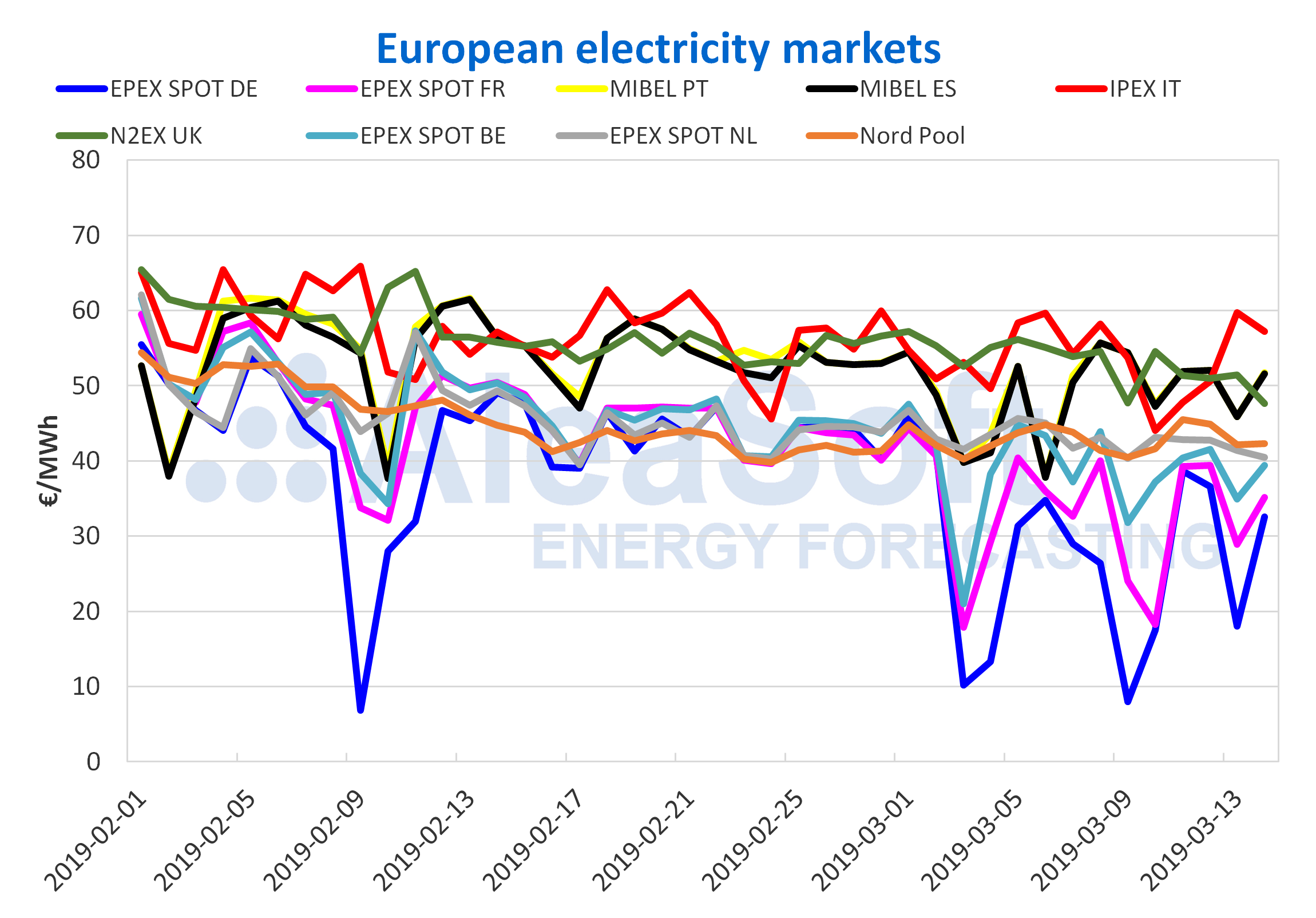 The Brent oil price in the ICE futures market for the month of May 2019 has been above 66 $/bbl this week and with an upward trend, settling yesterday March 13 at 67.55 $/bbl, the maximum settlement price so far this year for this product. This increase came after the last weekly report of the EIA (U.S. Energy Information Administration) indicated a decrease in crude stocks in the United States, and also the OPEC production cuts remain and the climate of politics instability in Venezuela continues.

On the other hand, the TTF gas futures for April this year in the ICE market continued this week the downward trend that they have been experiencing since the end of September last year and yesterday, March 13, fell from 16 €/MWh, down to 15.73 €/MWh, something that did not happen since the beginning of September 2017.

The API 2 coal futures for next month in the ICE market began this week around 71 $/t, and in yesterday session of March 13 dropped to 70.60 $/t, a value that had not been reached since the beginning of August 2017.

The futures of CO2 emissions rights in the EEX market for the reference contract of December this year have been this week around the equilibrium value of 22 €/t stated by AleaSoft. In yesterday session of March 13 they settled at 22.29 €/t.

Spain’s electricity futures for April 2019 rose on Monday, March 11, after the Minister for Ecological Transition, Teresa Ribera, announced that the suspension of the 7% tax to the electricity generation approved last October with six months duration, until March of this year, will not be extended. In the OMIP market, the increase was of 1.9% compared to the session on Friday, March 8, and in the EEX market, it was of 0.7%. The rest of the week the price was above 49 €/MWh, settling on Wednesday, March 13, at 49.50 €/MWh, both in the OMIP market and in the EEX market. The Portugal futures prices in the OMIP market for the next month also increased this week dragged by the rise of the Spanish futures, and yesterday, March 13, settled at 49.20 €/MWh.

On the other hand, the futures of France and Germany for April this year in the EEX market continued this week the downward trend they have been experiencing since March began and in yesterday session of March 13 they marked a minimum settlement price since that product is traded, of 39.27 €/MWh and 37.89 €/MWh respectively.

As for wind energy production in Spain, so far this week, from March 11 to 13, there was a 38% fall compared to the first three days of last week. AleaSoft’s forecasts indicate that next week of March 18 there will be a slight recovery of the production with this technology but without reaching the levels of last week of March 4.

This week all the nuclear power plants continue operating normally and the daily hydroelectric production has been in a range between 70 and 95 GWh. 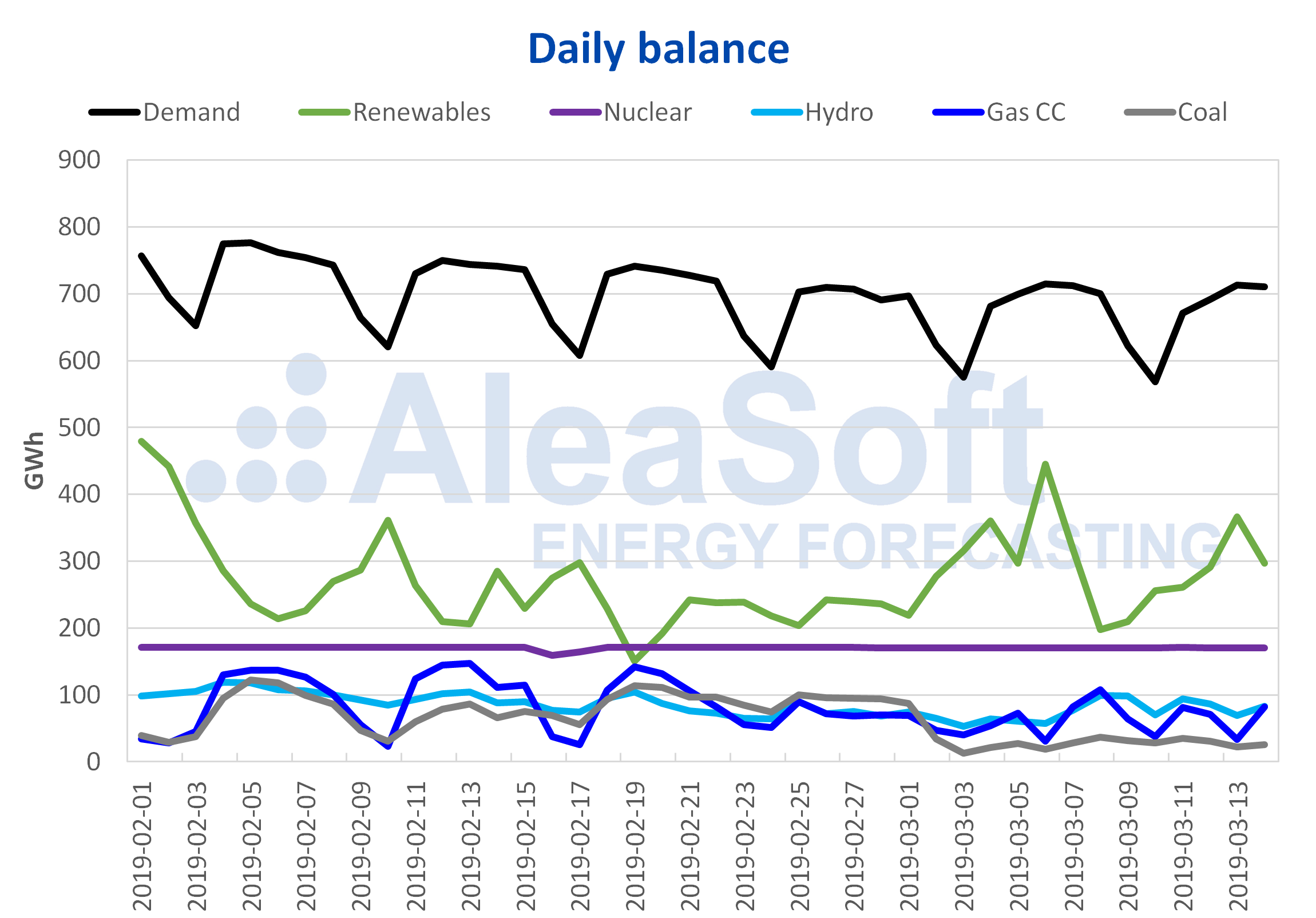 Hydroelectric reserves increased again this week of March 11 at 316 GWh after last week’s fall, according to data published in the Hydrological Bulletin of the Ministry for Ecological Transition. Currently, the reserves are 11 352 GWh, which represents 49% of the total capacity.