February: The springtime respite for the electricity market price is here

The price of the Iberian electricity market MIBEL in Spain ended the month of February with an average price of 54.01 €/MWh, a decrease of 13% compared to the month of January and 24% compared to the month of September, when the highest prices in 2018 were recorded. With respect to February 2018, the price difference was more moderate with a decrease of 1.6%. According to AleaSoft, the reduction in demand due to milder temperatures and also the fall in fuel prices were the main causes of the drop in the market price, a situation that, according to the consultancy, is the usual seasonal behaviour.

The MIBEL market in Portugal behaved similarly to the Spanish market with an average price in February of 54.71 €/MWh, a reduction of 13% compared to January and 0.5% compared to February 2018. Both Iberian markets were coupled 567 out of the 672 hours of the month of February, meaning 84% of the time.

Like the Iberian market, all the European electricity markets registered a drop in the price during the month of February. The markets with the sharpest price declines were the French EPEX SPOT market with a drop of 24% compared to the January price, the Belgian EPEX SPOT market with 21% and EPEX SPOT of the Netherlands with 20%. The fall in prices in the rest of the markets were around 15%.

The situation is more different if we compare the average price of this February with that of February 2018. Most European markets, like the Iberian market, registered a very similar price to the same month of last year. However, the Nord Pool market in the Nordic countries is clearly noted because registered a year-on-year increase in the price of 16%, affected by low hydroelectric production. It is followed by the German EPEX SPOT market with a difference of 6.7% compared to February 2018, and after that by the EPEX SPOT market in the Netherlands with 5.2%. 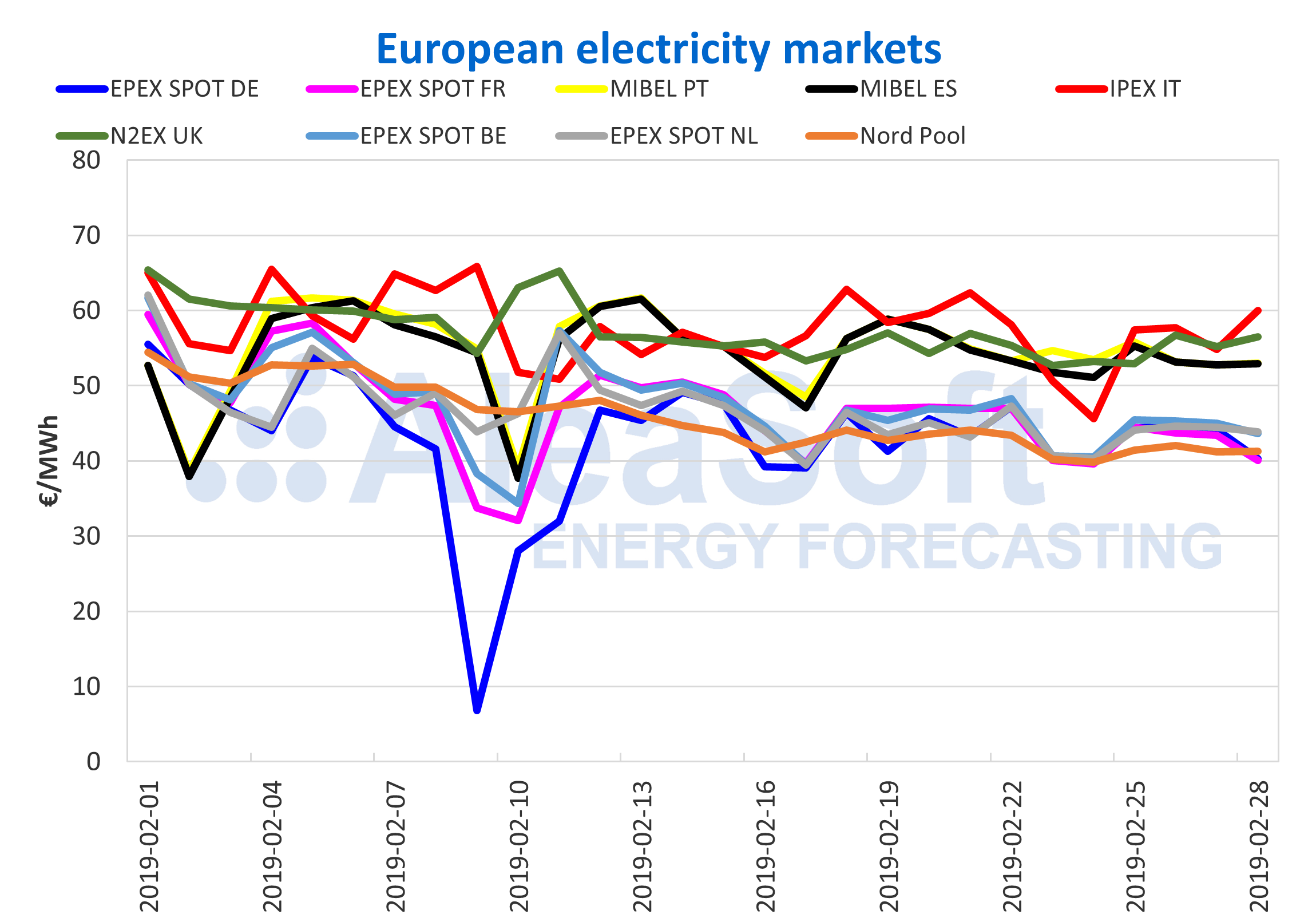 The price of the future of the barrel of Brent oil for April fell at the beginning of this week, of February 25, below $65, after standing above $67 the previous week. But in recent days it has been recovering and yesterday, February 27, it was already at $66.39 a barrel on the ICE market.

The fuels prices, gas and coal, also have an upward trend this week, due to the forecasts of lower temperatures in Europe and an expected increase in the use of fuel in thermal power plants, after having experienced decreases at the end of the last week. The future for March of the TTF gas has increased by 4.0% during this week and yesterday, February 27, stood at 17.62 €/MWh in the ICE market. The price increase of the API 2 coal future for March has been of 2.5%, up to $75.05 per ton in yesterday’s session in the ICE market. In AleaSoft it is estimated that this price rise is temporary and that the general downward trend will continue in the mid-term.

The behaviour of the price of CO2 emission rights has been similar to that of fuels, also with significant increases during this week due to the forecast of lower temperatures, but reinforced by news that makes a no-deal Brexit in March unlikely. In the EEX market, the reference future for December was traded at 21.28 €/t, after rising 13% since the end of last week.

Electricity futures of Spain for March in the OMIP market settled yesterday, penultimate trading day of this product, at 48.20 €/MWh. Just the day before, on Tuesday, February 26, they set the lowest price since its trading began, 47.35 €/MWh. In the EEX market, the settlement price yesterday, Wednesday, February 27, was 47.68 €/MWh, while the minimum of Tuesday 26 in this market was 47.05 €/MWh. The future for March for Portugal had a similar behaviour and stood yesterday, February 27, at 47.83 €/MWh in the OMIP market.

Electricity futures for March for France in the EEX market continue their downward trend and are now close to 40 €/MWh. In the case of Germany, futures for March have already fallen from that level and settled yesterday at 38.20 €/MWh.

On the other hand, solar energy production, which includes both photovoltaic and solar thermal, was 880 GWh, 23% higher than in February 2018. Hydroelectric production also experienced a year-on-year growth of 5.9% with 2531 GWh produced.

Nuclear production has increased by 4.7% compared to January, according to AleaSoft data after correcting the calendar effects, since, unlike the previous month, in February there were no nuclear stops, only the power decrease of the Cofrentes plant on February 16 and 17. 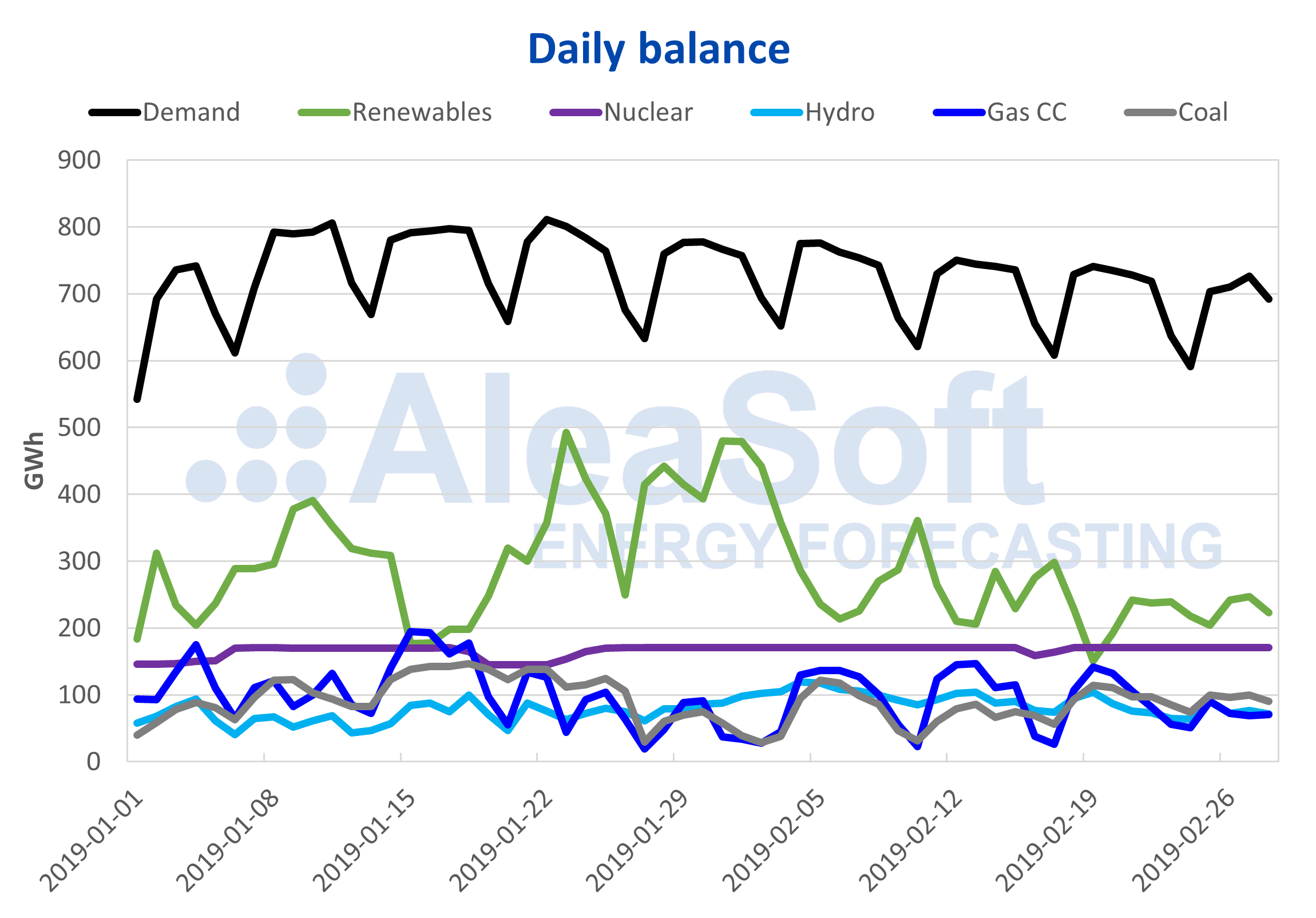 Electricity demand in the mainland territory this February was 20 185 GWh, according to REE. The decrease in demand compared to the same month of the previous year was 5.1%, which, correcting for the effects of temperature and labourality, is left at 2.0%.

At the beginning of this week, the hydroelectric reserves of the mainland territory had increased by 0.3% with respect to the previous week, reaching 11 124 GWh. This level of reserves is far from the typical values of 15 000 GWh in years with good rainfall, but they are at similar levels to those of years after periods of severe drought such as 2013, after the drought of 2012. According to AleaSoft, if spring rainfalls begin in the coming weeks, reserve levels can easily rise to the usual seasonal levels, since, although they are low, the levels are 39% higher than last year 2018, and that year reached the end of spring with the highest reserves levels of at least the last 17 years.