AleaSoft, March 4, 2019. AleaSoft analyses the behaviour of the markets of fuels, CO2 emission rights and electricity during the month of February in which the prices of the electricity markets fell due to the higher temperatures that made the electricity demand decrease. In the last week, the increase in the price of CO2 and its impact on electricity futures markets stands out, as well as the stabilisation of the Brent price around 65 $/bbl.

The price of Brent oil futures for May 2019 in the ICE market settled on Friday, March 1, at 65.07 $/bbl, about 2.30 $/bbl less than the previous Friday, February 22. If the trend of the last ten weeks is analysed, a first price rise is observed from December 24, with 51.31 $/bbl, until January 10, with 62.02 $/bbl. A second stretch until February 11 where prices were between 60 $/bbl and 62.80 $/bbl. On February 15 there is a jump to 66.22 $/bbl, and from there it has moved between 65 $/bbl and 67.25 $/bbl on Friday, February 22. An equilibrium point has been reached above 65 $/bbl and the evolution will depend on the production news from OPEC and Venezuela that have a downward trend in the first half of 2019 and, on the other hand, the slowdown of the world economy. An increase in the Brent oil price produces an increase in the economic slowdown with a corrective effect. In AleaSoft it is considered that the trend will remain stationary this week in the same range between 65 $/bbl and 68 $/bbl.

The prices of API 2 coal futures for the month of April in the ICE market remained stable since February 15 around 75 $/t.

As we have mentioned in AleaSoft before, both fuels are generally having a similar trend and in this case they remain stationary. Looking ahead, with the best weather conditions of spring, the prices of these fuels will relax, although always depending on the Brent instability.

The prices of the futures of CO2 emission rights for the December 2019 reference contract in the EEX market behaved irregularly since February 1. The month of February started very close to 22 €/t, which at the moment in AleaSoft we consider a reference price. On February 6, the maximum of the period was reached with 23.72 €/t. As of that day, prices drop until February 21 with 18.82 €/t. Last week, prices climbed to 22.28 €/t on Friday, March 1. The main source of instability, that we mentioned in AleaSoft in previous weeks, is the uncertainty of the Brexit. The fact that the possibility of a Brexit without agreement is moved away causes the price of CO2 emissions to rise again. At this time, as stated above, a price of 22 €/t seems to be an equilibrium value for the week that begins.

The main electricity markets in Europe followed the same trend in February. A rise in temperatures between two and four degrees has caused a drop in electricity demand. Prices have continued this decline since February 1 when they were at 59 €/MWh until March 4, which fell on average to 39 €/MWh, a decrease of 20 €/MWh that represents more than 30%.

On Sunday, March 3, a new range of even lower prices appeared, between 10 and 20 €/MWh, where the German, French and Belgian markets were placed.

Taking into account the analysis of AleaSoft, the downward trend could be slowed this week by the forecast of lower temperatures along with the rise in the price of CO2 emissions rights of recent days, which may even cause a rise in the prices in Europe.

Last week, on February 25, the electricity futures for April 2019 of most European markets began marking historical or recent months lows, but since mid-week began to rise, slowing the downtrend that had been experiencing since the end of December 2018. According to AleaSoft, this increase in prices has been caused, mainly, by the increase in the prices of CO2 emission rights.

France‘s electricity futures in the EEX market for next month had marked the historical minimum settlement price, of 40.69 €/MWh, on Friday, February 22, and last Friday, March 1, settled at 42.75 €/MWh, which represents an increase of 5.1% during those seven days.

In the case of Italy, electricity futures in the EEX market reached on Friday, February 22, the historical minimum settlement price for the product of April 2019, of 50.43 €/MWh, and during the last week they have increased similar to the rest of futures markets up to 52.12 €/MWh on Friday, March 1, a value 3.4% higher than that of seven days before. However, in the MTE market operated by GME, the rise of the rest of the markets didn’t materialized yet and last week it remained stable at 53.44 €/MWh.

On Monday, February 25, the futures of Belgium and Netherlands for the next month in the ICE market marked a minimum settlement price of the last months. In the case of Belgium, the price was 43.13 €/MWh, and it is the minimum value since the end of June 2018 and in the case of the Netherlands, the settlement price was 42.59 €/MWh, a value that was not reached since the beginning of May of last year. Over the past week both markets rose more than 4%, to 44.93 €/MWh and 44.52 €/MWh, respectively.

UK futures in the ICE market for April this year also experienced a slight increase of 1.1% over the course of last week, from 47.41 GBP/MWh on Monday February 25 to 47.94 GBP/MWh on Friday, March 1. In this case, it was on Tuesday, February 26, when the minimum value since the beginning of May 2018 was reached, at 47.23 GBP/MWh.

Wind energy production during this month of February 2019 was generally very discreet in the European continent. Production was clearly reduced compared to the month of January. In the Iberian Peninsula, the fall was 38%, followed by Germany with 29% and France with 13%. In the case of the Italic Peninsula, wind energy production remained at the same level as in January, with a slight decrease of 0.5%.

Comparing this February with February 2018, the behaviour of wind production in the different markets is somewhat more disparate. According to AleaSoft, the year-on-year drop in the Iberian Peninsula was 22%, while in France it was only 4.7%. On the other hand, in Germany and Italy there has been a year on year increase in wind energy production of 30% and 35%, respectively.

For this week, according to AleaSoft, wind energy production is expected to recover in most markets. Some production peaks could cause some price decreases in a few hours, as already started to happen today, March 4, in the EPEX SPOT and MIBEL markets. 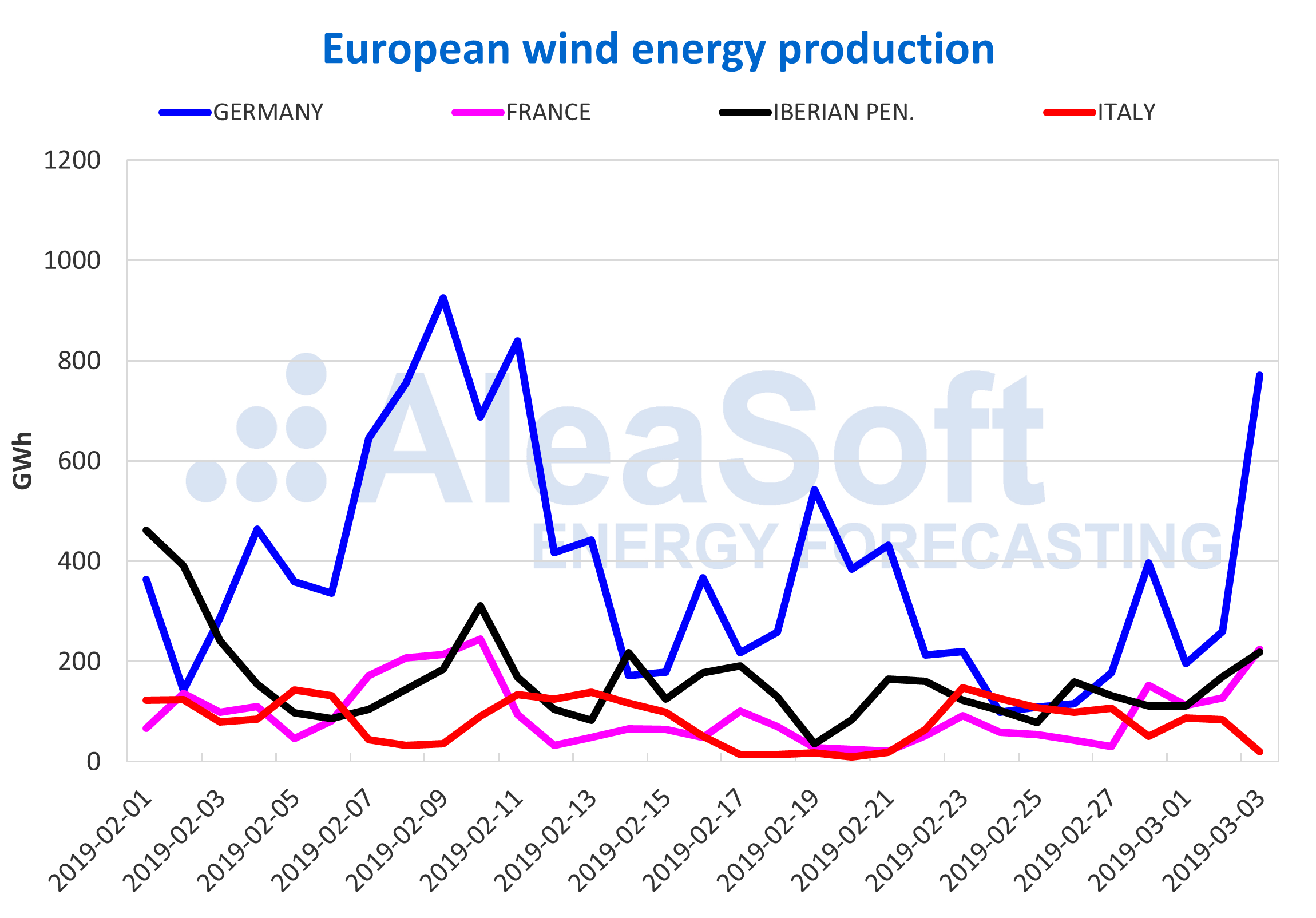 Solar energy production, which includes both photovoltaic and solar thermal technology, has followed the seasonal upward trend during the month of February due to the increase in sunshine hours, and accompanied by favourable weather conditions. Thus, the increase in solar energy production in Germany in February was 196% compared to production in January, in Italy, 58%, and in Spain, 36%.

Analysing the year on year growth of solar energy production for Italy, Spain and Germany, the increases recorded have been 57%, 29% and 22% respectively.

For this week of February 4, adverse weather conditions point to a slight decrease in solar production of around 20%, according to AleaSoft. 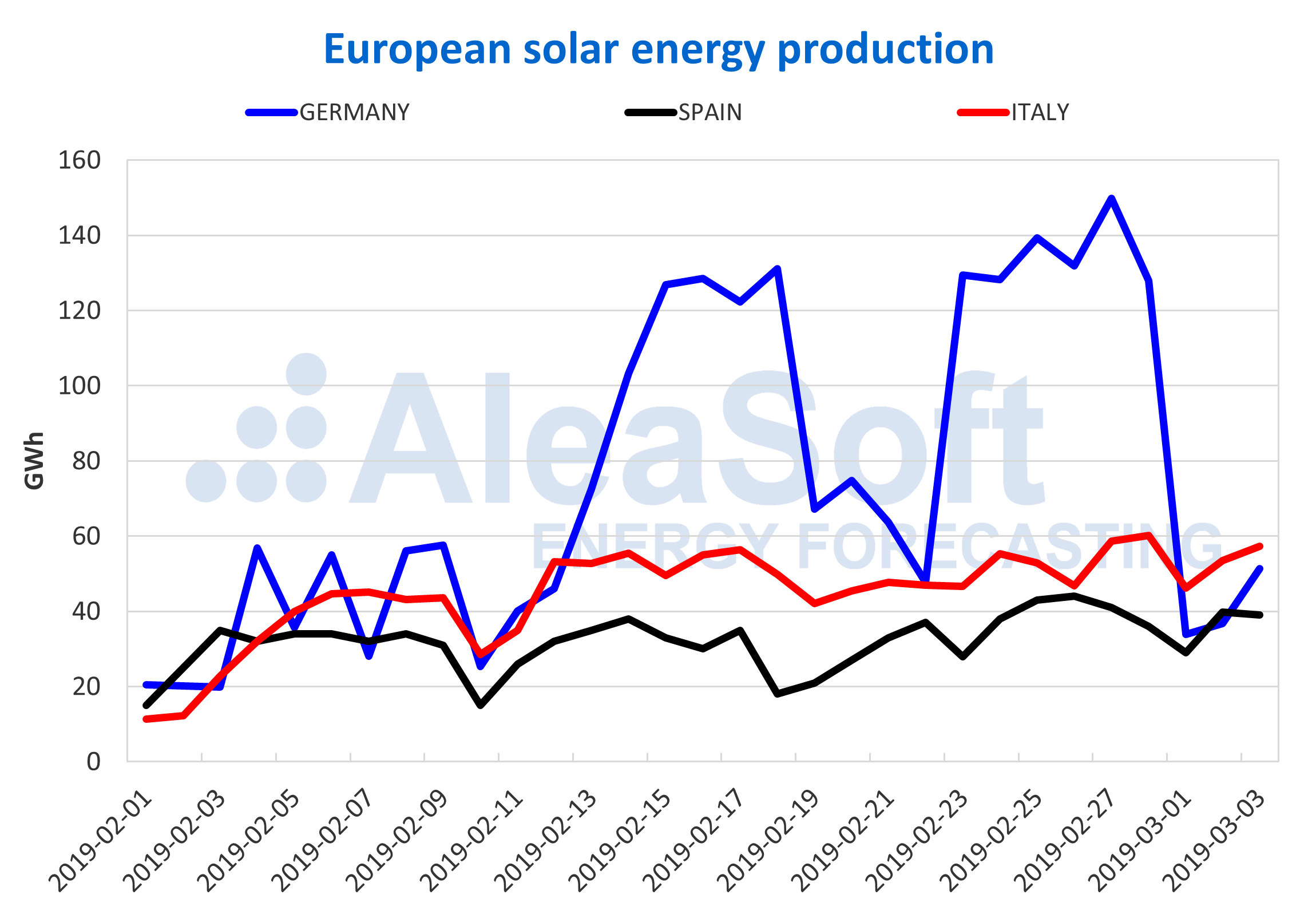