How does the MIBEL electricity market work?

AleaSoft, October 7, 2019. AleaSoft celebrates this week the 20th anniversary of its foundation. To celebrate it, AleaSoft will publish a series of articles on the Spanish electricity market, a sector for which it has worked during all these years being leaders in demand, prices and production forecasts by technologies in the short, medium and long term. This first article contains a description of the market and in the following ones a market analysis will be carried out in different stages. 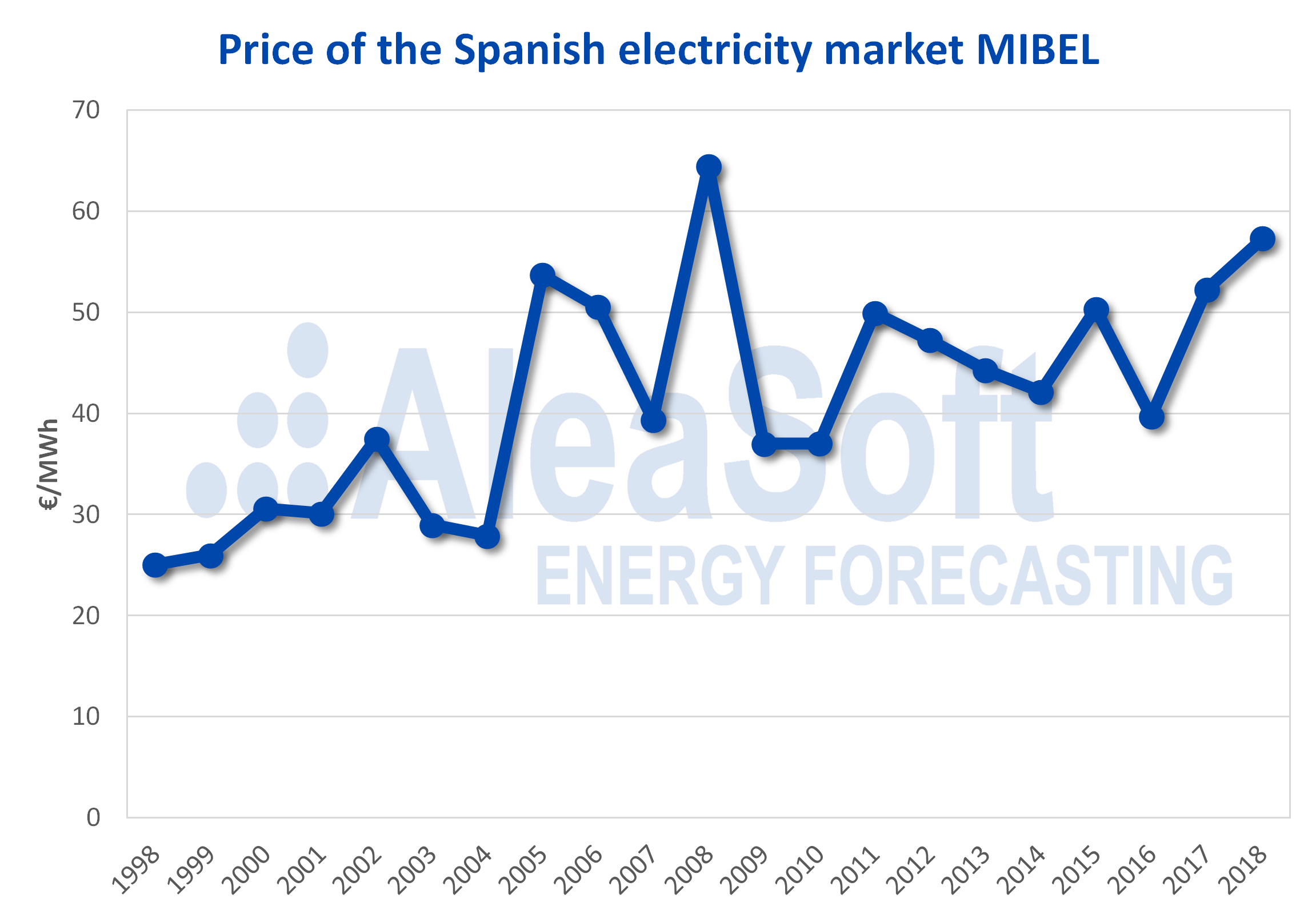 The operators of the transport grid, Red Eléctrica de España (REE) in Spain and Redes Energéticas Nacionais (REN) in Portugal, are responsible for guaranteeing the operation of the system and the technical management of the grid, while the entity in charge of manage the wholesale market spot MIBEL is the Operator of the Iberian Energy Market-Spanish Pole (OMIE), which is made up of the daily market, the auction intraday markets and the continuous intraday market.

The MIBEL daily market is coupled with the markets of northern central Europe, since May 13, 2013. The matching in MIBEL is carried out jointly with the rest of coupled European markets using the EUPHEMIA algorithm. The electrical interconnections between the European markets contribute to the security and continuity of the electricity supply in the interconnected systems and in turn allow a greater integration of the renewable energies. The interconnections allow the electricity generation to be carried out with the most efficient technologies and the energy to flow from where it is cheaper to where it is more expensive. The energy exchanges allow the offers of the Iberian agents to compete with the offers of the other European agents and that all markets can benefit at all times from the most competitive or favourable conditions.

The Iberian daily market, like the rest of European markets, is of a marginalist type and is held the day before the delivery of electricity. In the daily market the buying agents (marketers, final consumers, exporters, traders and other intermediaries) and sellers (generators, importers, traders and other intermediaries) of Spain and Portugal, present their offers, for each hour of the next day through OMIE, the only NEMO (Nominated Electricity Market Operator) designated for Spain and Portugal. The purchase and sale offers are admitted taking into account their economic value and the available interconnection capacity. The price of electricity will be the same in all countries if the available interconnection capacity is sufficient for the flow of electricity negotiated at that specific time. On the contrary, if the interconnection is fully occupied by that time, the algorithm (EUPHEMIA) sets a different price for each zone, performing the market‑splitting. In the first three quarters of 2019 the price of electricity has been the same for Spain and Portugal in the 94% of the hours, showing a great convergence between both countries. On the other hand, Spain and France have only coincided with a 16% of the hours in that same period, partly because of the work being done on the Cantegrit-Argia-Hernani interconnection cable, which links France and Spain in the Basque Country, which have decreased interconnection capacity. During the past year, these statistics were 95% with Portugal and 25% with France.

Once the corresponding offers have been presented, for each hour of the next day, by the sellers, these are added and sorted in ascending order by EUPHEMIA, generating the market supply curve for each hour.

In the lower part of the supply curve, the nuclear power plants are located, which offer €0/MWh, the lowest price currently allowed, due to their low flexibility and the costs associated with power changes, shutdowns and the start-ups, the flowing hydraulic plants, due to their low opportunity cost, and the renewable wind and solar energies, which are not manageable and usually have low variable costs. This is why renewable energies have a great influence on the market price, because in high availability situations, they shift the supply curve causing prices to fall.

At the top of the supply curve are the adjustable hydraulic power plants, given their high opportunity cost, and the combined cycle and coal thermal power plants.

On the other hand, the offers presented by the buyers for each hour of the following day are ordered by the EUPHEMIA algorithm in descending order of their price, generating the market demand curve for each hour.

In the upper part of the demand curve are the marketers that usually offer at the maximum allowed price of €180.30/MWh, thus ensuring that their consumers have covered the energy they consume, although the price they will pay will be the resulting of the market matching, while in the part of the curve corresponding to the slope there are the consumers who are willing to buy energy if their price is less than or equal to a certain value. 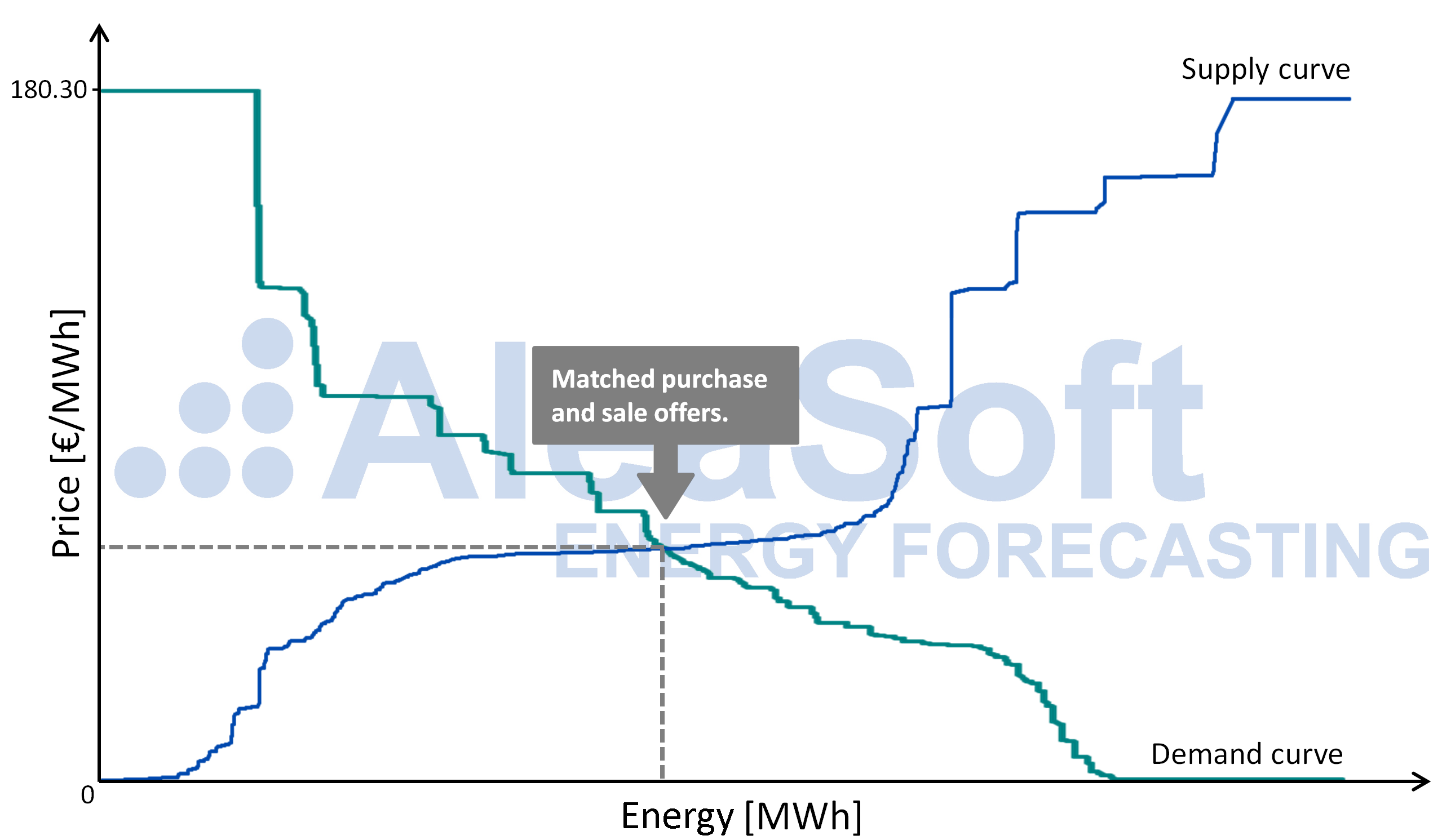 Price set by the thermal gap

The use of the installed power of conventional thermal power plants, such as coal, and combined cycle power plants is mainly determined by the production of non-manageable renewable and nuclear technologies. The thermal gap is the part of the demand that is not covered by these technologies and that has to be covered with the generation of electricity from conventional thermal and combined cycle power plants.

In 2018, almost 80% of the time the marginal price of the MIBEL market was marked by the hydro‑thermal gap. That means that the last sale offer that matched was from a hydroelectric power plant, a coal thermal plant or a combined cycle, and the price of this offer was what determined the marginal market price. This makes the MIBEL market price very dependent on the variable costs of thermal units, such as the gas and coal prices and the prices of CO2 emission rights.

The increase in the energy production from renewable and nuclear technologies or the decrease in electricity demand, leads to a reduction in the thermal gap and, therefore, a lower use of conventional thermal capacity and combined cycles.

In the Mainland Spanish system the thermal gap has been reduced due to the massive introduction of renewable technologies, mainly wind and solar, and the decrease in electricity demand that occurred during the economic crisis. This reduction has led to a significant reduction in the operating hours of the conventional thermal technologies and the combined cycles. This reduction also had an impact on the number of hours that the hydro‑thermal gap established the marginal price in the electricity market. During the period 2013‑2018, the fraction of yearly hours in which the marginal price was marked by the hydro‑thermal gap registered a slow decrease. In 2013, the hydro‑thermal gap marked the price the 93% of the time and, since then, these values decreased to 78% in 2018, with a minimum of 73% in 2016 due to the increase in the renewable energy production that year.

The trend in the reduction of the thermal gap and the use of conventional thermal capacity and combined cycles must continue in the future, because, although electricity demand began to recover once the economic crisis was overcome, the introduction of measures to achieve the objectives of the European Union of energy efficiency will make demand have more modest growth.

The EU’s objective of reaching in the year 2030 at least 35% of renewable energy sources in final energy consumption will continue to increase renewable generation capacity, which is mostly unmanageable. Specifically for the electricity system, the objective is a generation of electricity from renewable sources of at least 70% by 2030.