AleaSoft, October 3, 2019. The prices of most European electricity markets stabilized so far this week after declining since the end of last week and the beginning of this week due to the increase in the renewable energy production in most of the countries analysed. According to AleaSoft’s analysis, the decline in the renewable energy production in these countries so far in October brought the prices to their usual levels.

So far this week the price of the European electricity markets returned to its typical disposition after the falls experienced by several of these markets. After a few days with the EPEX SPOT markets in Germany, Belgium, France and the Netherlands seeing their prices drop and even touching negatives in a few hours during the weekend and last Monday, mainly due to the high wind energy production; the markets returned to more common values.

Since the beginning of the current month of October, the Nord Pool market in the Nordic countries regained its traditional position as the lowest priced European market. The settling price of this market for Thursday, October 3, was €36.03/MWh. Also, the markets that experienced the most intense price declines this weekend, all converged at very similar prices differing by a few cents; being the daily average price for today Thursday, October 3, in the wholesale markets of Germany, Belgium, the Netherlands and France of €40.07/MWh, €40.64/MWh, €40.77/MWh and €40.80/MWh, respectively.

The N2EX market in Great Britain closed around €2/MWh above the previous group, with an average price of €42.28/MWh. For its part, the MIBEL market closed today October 3 at €48.29/MWh, remaining for the eighth consecutive day as the second most expensive market in Europe. Only above the price of the Iberian market was the IPEX market in Italy, whose settling price was €55.59/MWh. 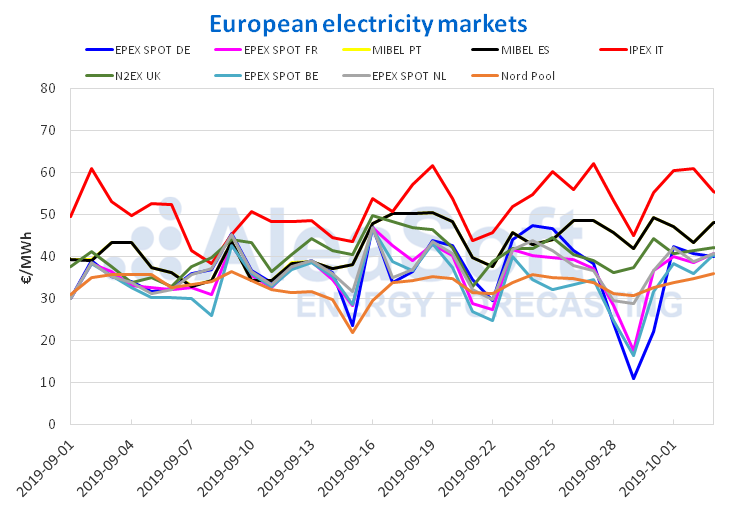 This week, the price of Brent oil futures for the month of December in the ICE market continued with the downward trend that began at the beginning of last week. The prices fell throughout the week to reach $57.69/bbl yesterday Wednesday October 2, a value 6.1% lower than the value reached the previous Wednesday. However, the decline in US oil reserves could lead to a rise in prices.

The TTF gas futures in the ICE market for the month of November began this week with a price of €16.39/MWh, €0.30/MWh below the settling price on Friday, September 27. On Tuesday, October 1, the prices experienced an increase of €0.37/MWh compared to the price of Monday and then on Wednesday there was a decrease of 4.5% compared to the previous day, reaching €16.00/MWh, which represents 3.0% lower than the one reached on Wednesday of the previous week. This price decline is related to an increase in gas flow from Norway to the rest of Europe.

The prices of API 2 coal futures in the ICE market for the month of November began this week with a value of $61.00/t, $2.25/t below the value reached on Monday of last week. On Tuesday the price experienced a slight increase of 0.7%, while on Wednesday there was a decrease of 1.2% to reach $60.65/t. This value is still $0.50/t higher than the minimum price for that week, recorded on Wednesday, September 25.

The prices of European electricity futures for the first quarter of 2020 remained low during this week. The exception was the ICE and NASDAQ markets of the Nordic countries that closed Wednesday, October 2, a little higher than the previous Friday. The rest of the countries fell between 3.1% and 1.1% in the same period.

Similarly, the European electricity futures for the year 2020 closed yesterday Wednesday below the prices recorded on Friday, September 27. In this decline the EEX and ICE markets in Great Britain stand out, which closed 2.7% lower, followed by the Belgian ICE market with ‑2.2%. For the rest of the markets the trend was less pronounced, with a moderate fall of between 1.4% and 0.3%.

The electricity demand in Mainland Spain increased 0.8% from Monday to Wednesday of this week compared to the same period last week. Once the labour effect of the holiday of September 24 in Barcelona was corrected, the increase was 0.3%. Germany and the Netherlands were the countries with the greatest variations among those analysed in the first three days of this week. While in Germany the demand increased by 3.9%, in the Netherlands it decreased by approximately the same proportion. The rest of the countries analysed had variations between ‑1.3% and 2.5%. 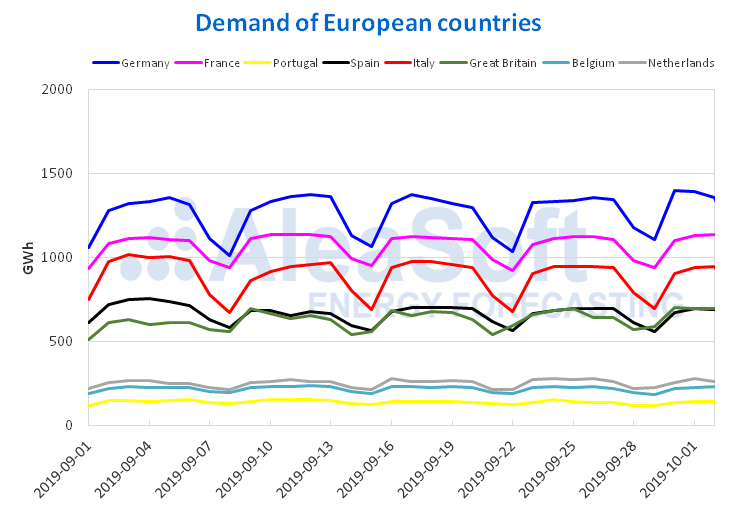 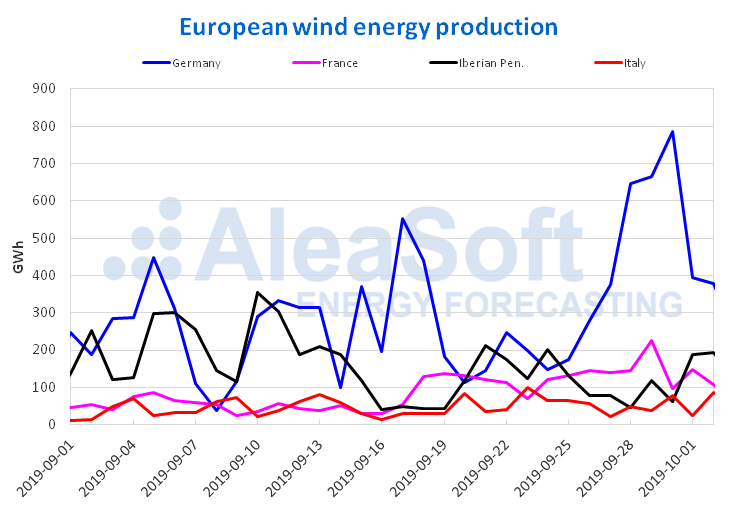 On the other hand, the solar energy production, which includes photovoltaic and solar thermal, was 7.5% below the average of last week in Spain. In Italy and Germany it increased 2.6% and 0.6% respectively. 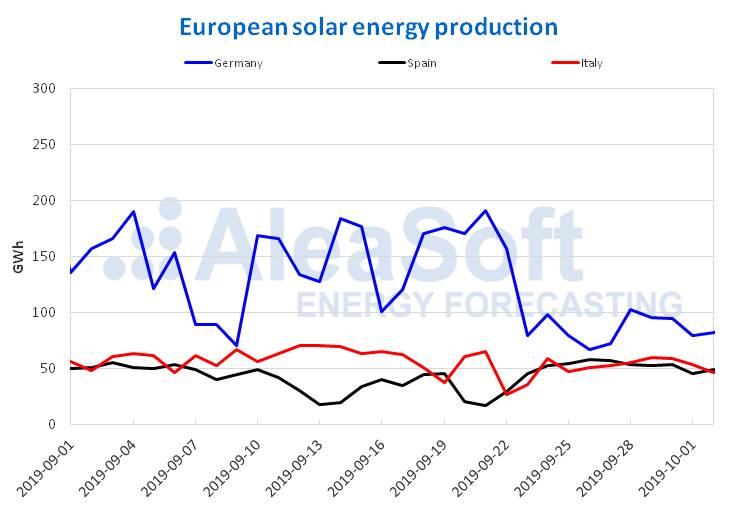