The current energy crisis and the situation of high fuels and electricity prices into which it resulted highlights what, at AleaSoft Energy Forecasting, was always commented on: the importance of defining an electricity purchase and sale strategy to minimise the risk posed by situations of instability in the markets.

Antonio Delgado Rigal, PhD in Artificial Intelligence and CEO of Aleasoft Energy Forecasting, analyses in this interview current issues of the sector, such as record prices in the energy markets, measures to lower the electricity bill, the vision of the future on the energy transition, as well as the different needs posed by the sector at the short‑ and long‑term. 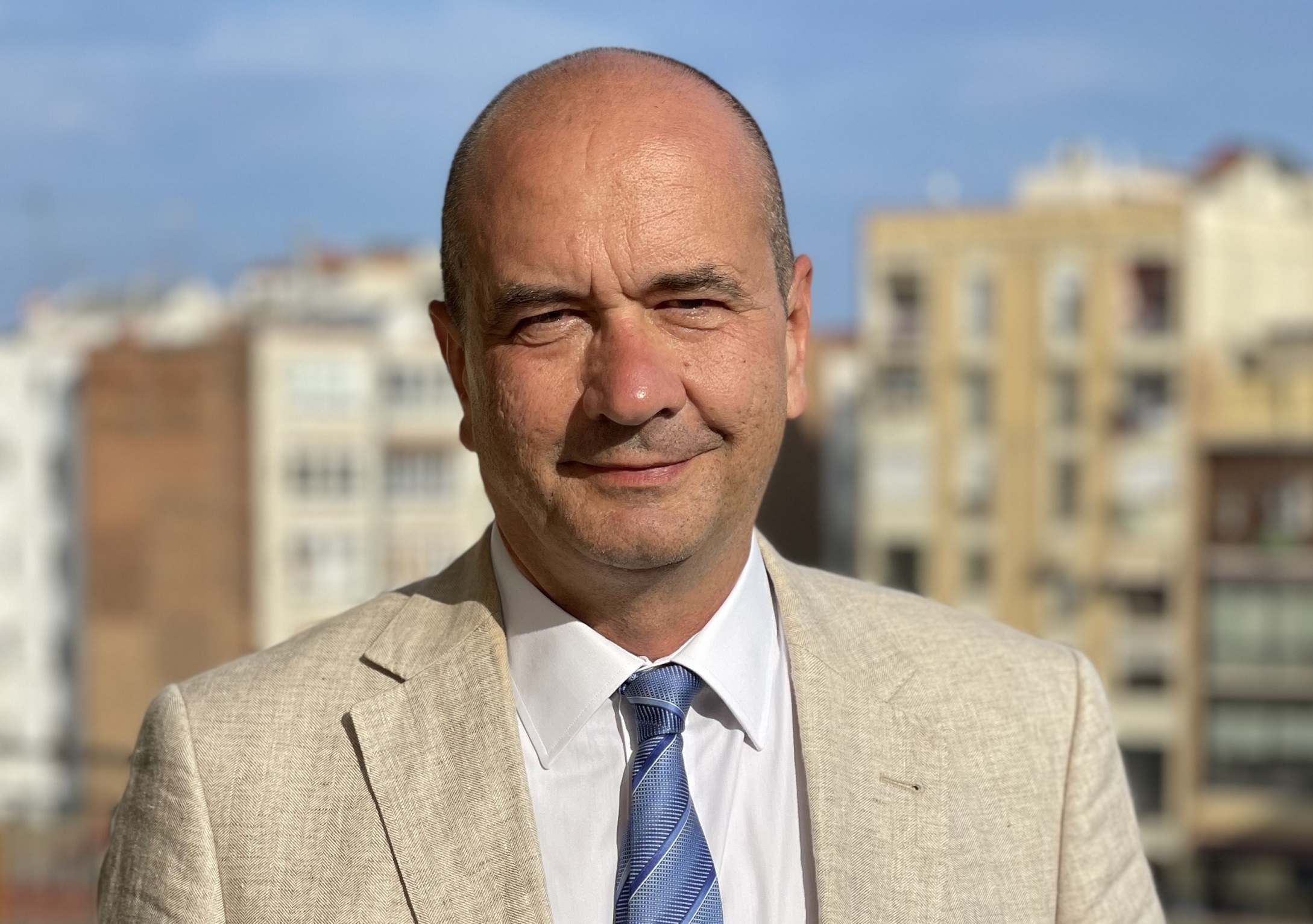 Is the strong increase in electricity price in Spain avoidable?

Taking into account the rise in gas prices to historical highs and that, currently, in Spain combined cycle gas turbines are the backup technology when there is not enough nuclear energy and renewable energies to cover the demand, the increase in electricity market prices was unavoidable. This situation worsened this summer because the demand increased with the rise in temperatures, the wind energy production is lower during this season and hydroelectric reserves were lower. What the European Union could have done, and can still do, is regulating CO2 emission rights prices so that they were at levels that would allow further progress in the energy transition but that would prevent the rise in electricity markets prices were so dizzying. At AleaSoft Energy Forecasting, we consider that this objective is achieved with CO2 prices between 20 and 30 Euros per ton. According to our estimates, with CO2 prices in that range and gas prices at €70/MWh, electricity market prices could be around €145/MWh‑€150/MWh. This situation should help the Government to consider what to start doing now to prevent something like this from happening again in the future. Currently, Spain must buy gas in international markets where prices are influenced by geopolitical conflicts, on many occasions, or by supply shortages and tension in international markets, as is currently the case. In other words, a scenario of high prices like the current one can get worse and can be repeated in the future. What can be done then? Reducing the dependence on gas. How? With the development of renewable energies, which is something in which progress was made, although the legal uncertainty generated by the mechanism for reducing the excess remuneration of the electricity market included in Royal Decree‑Law 17/2021 puts in danger that it keep advancing at the pace that is needed. Also promoting the development of green hydrogen, which can be a substitute for gas in many industrial processes and, moreover, will be essential in the development of renewable energies avoiding curtailments and the dreaded “cannibalisation” of photovoltaic energy. It is necessary to create a demand for green hydrogen in transport and the State must boost with aid or directly, for example, the hydrogen stations that we have in the country, which can currently be counted on the fingers of one hand.

The breaking of electricity contracts is a phenomenon that is being repeated in a dangerous way during the months of July, August and September. What can it represent for retailers, for the client, and the market in general?

Obviously, this is not good for either party and shows the importance of defining an energy purchase and sale strategy based on diversification to minimise the market prices risk in atypical periods in the market, whether of high prices such as the current ones or of low prices.

The consequence for retailers is the loss of trust on the part of their clients. A trust that is hard to achieve. For clients, this situation creates confusion and concern. On the one hand, trust in retailers and mid‑ and long‑term fixed contracts collapses. On the other hand, large consumers who lose their contracts and have to go to the daily market and future markets will find astronomical prices.

As we said, it is a situation that is not good for either party. The solution: not having reached this situation thanks to having a long‑term vision of market prices and a diversification strategy to minimise risks.

RDL 17/2021 and its article 4 of reduction are accelerating the breaking of electricity supply contracts, which shows what we proposed: this Royal Decree‑Law is an earthquake for the electricity sector with devastating consequences at the short‑, mid‑ and long‑term.

CO2 emission rights prices did not stop rising in recent months, is it speculation or the reality that awaits us at the short‑term?

There is a significant component of speculation and the lack of indications that the European Union is going to do anything to regulate market prices suggests that prices will remain high at the short‑term.

It should be remembered that the European Union has the mechanisms to control CO2 prices in situations of both insufficient prices and high prices such as the current one. But at the moment, there is no Government that leads a proposal that tries to moderate current prices.

In some publications we suggested that, given the exceptional situation, Europe could propose a one‑year moratorium for electricity generators that consume gas and for large consumers.

Is what the Government proposed to do given the rise in electricity price enough?

The temporary reduction or elimination of taxes is undoubtedly a relief for all consumers. In this sense, it could go further and reduce VAT to 5% and even 1% in the case of vulnerable consumers.

In our opinion, the 7% Tax on the Value of Electricity Production (IVPEE) should be permanently eliminated, not only to lower prices of the electricity market and the bill, but because it puts Spanish generation plants at a disadvantage compared to those of neighbouring countries in an interconnected European market.

However, we consider that the measures are not sufficient. In our opinion, the Government should press in Europe so that CO2 prices fall to a level that allows the further development of renewable energies and discourages the production with polluting technologies but does not affect consumers.

On the other hand, we consider the profits reduction because of high gas prices very unfortunate. A measure like this generates legal uncertainty and “punishes” non‑polluting technologies that are vital during the energy transition. As we said on some occasion, investors run away from markets that do not give them sufficient confidence that rules will not change in the middle of the game.

Will prices continue to fluctuate in the future? 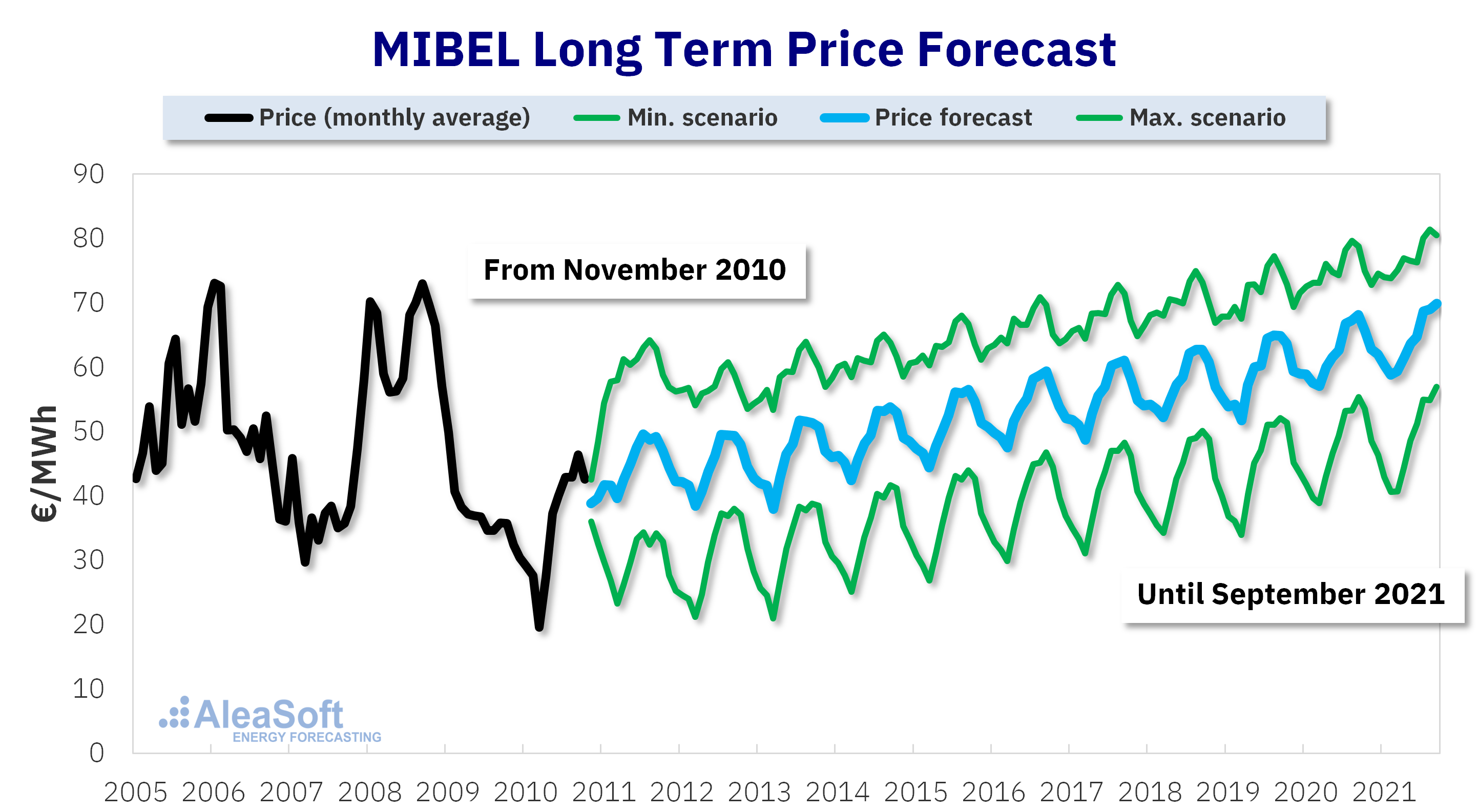 Long-term price forecast for the Iberian MIBEL electricity market carried out at the end of October 2010 by AleaSoft Energy Forecasting. It is observed how the models are able to capture the market equilibrium and extrapolate it towards the future taking into account the explanatory variables scenarios.
Source: OMIE and AleaSoft Energy Forecasting.

If the image is analysed, which shows a forecast of Iberian MIBEL electricity market prices that we carried out at AleaSoft Energy Forecasting at the end of October 2010, it is observed how prices fluctuated between periods of high and low prices, but they always returned to the equilibrium price projected by the long‑term forecast. 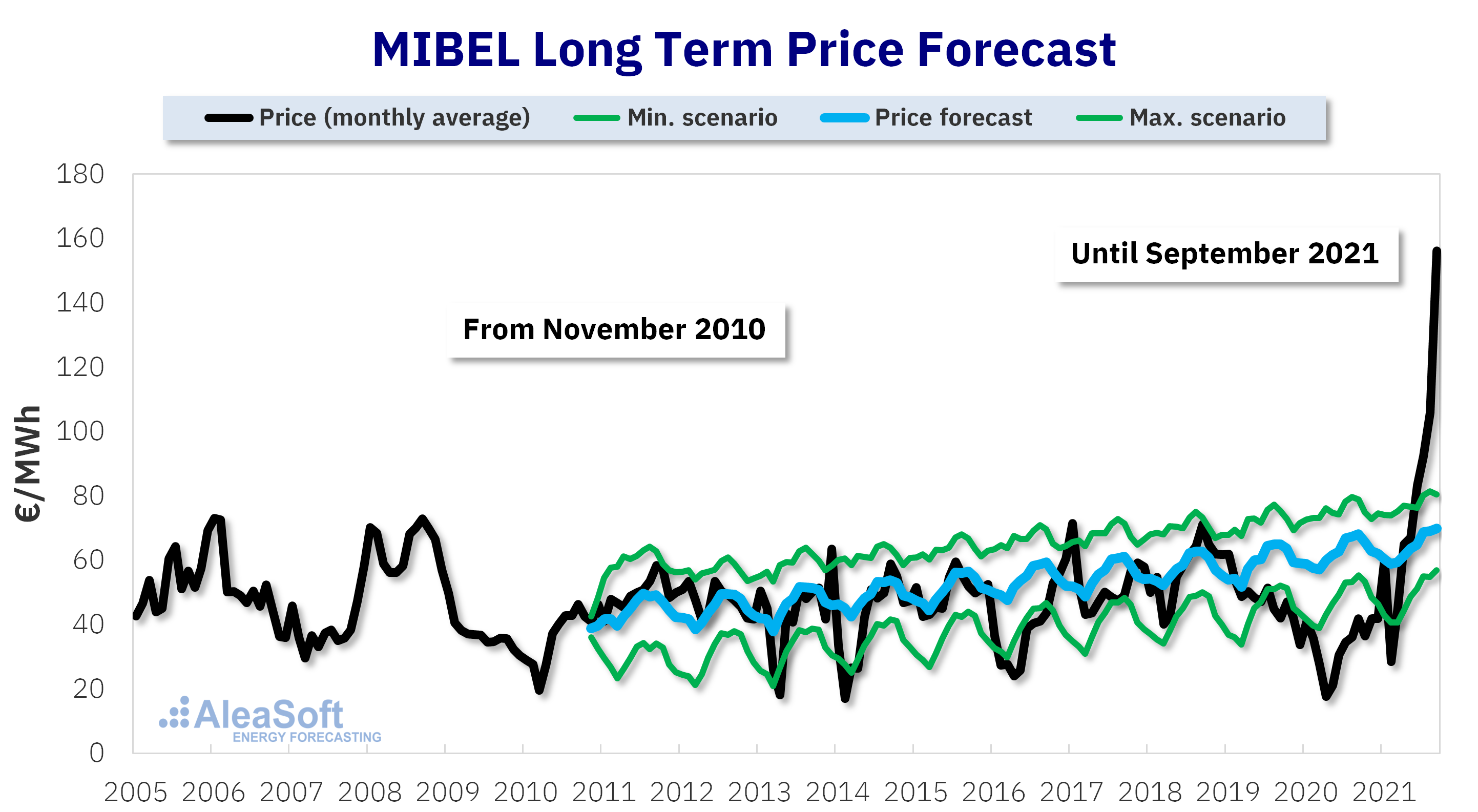 Long-term price forecast for the Iberian MIBEL electricity market carried out at the end of October 2010 by AleaSoft Energy Forecasting compared to real market prices. It is observed how electricity market prices fluctuate, with periods of high prices and others of low prices, but how they always return to the equilibrium point.
Source: OMIE and AleaSoft Energy Forecasting.

Prices will continue to fluctuate due to the nature of the market, but they will always do so around an equilibrium price, as can be seen in the graph that occurred during the last ten years. In any case, with the large‑scale implementation of energy storage technologies, such extreme episodes of low prices, as during 2020, or high prices, such as the current ones, will be less and less frequent.

Are renewable energies playing the role they should in the energy mix and in the electricity price?

Definitely. It is only necessary to see how polluting gases emissions by the electricity sector decreased in Spain to the extent that the installed renewable energy capacity increased. Between 2007 and 2020, the installed capacity of renewable energy technologies increased by 87% throughout the Spanish territory and in the same period, emissions from the electricity sector decreased by 68%. Since the beginning of 2019, it has practically not been produced with coal in Spain, in part, thanks to renewable energies. 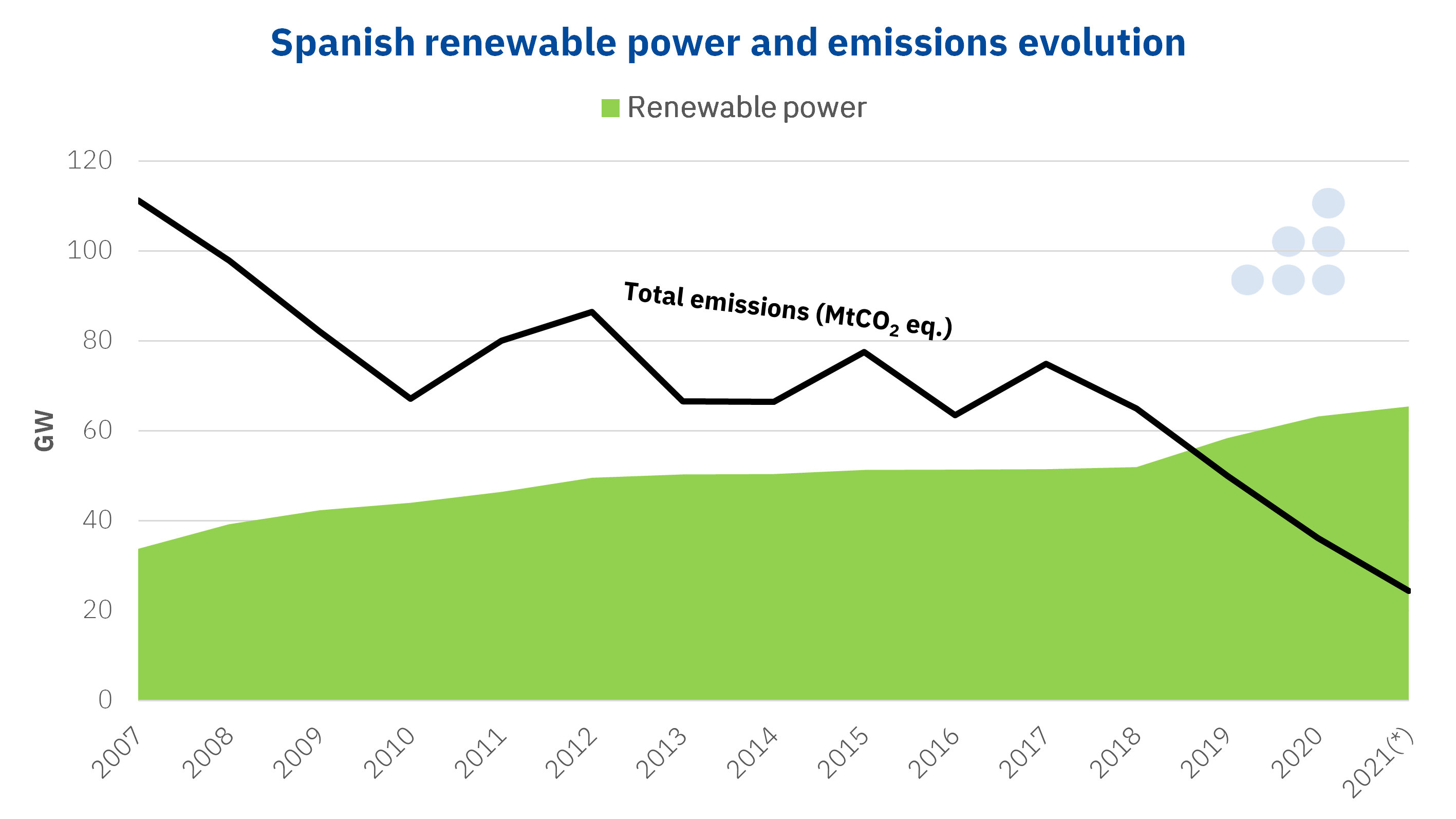 Evolution of installed renewable energy capacity and polluting gases emissions in the electricity sector in Spain. In 2021, data up to September 29.
Source: Prepared by AleaSoft Energy Forecasting using data from REE.

Solar energy has less installed capacity than wind energy and, in addition, the months of largest production of this technology in 2021 coincided with the gas and CO2 prices escalation. Even so, in May there were two weekends in which electricity market prices were very close to zero during solar hours, favoured by the contribution of solar energy during the weekend when the demand is lower. A clear situation of price cannibalisation, something that will be corrected at the mid‑ and long‑term as the new demand, the storage and the green hydrogen production take advantage of these episodes of more competitive prices.

In your opinion, how can the market evolve in 2022?

The rise in gas prices went from temporary to structural and it is expected to continue for a few months, at least until the end of the first quarter of 2022. This means that, at least at the beginning of the year, this will be a factor which will continue to push up electricity markets prices. It should be borne in mind that winter is the time of largest wind energy production, which could slow down price rises, if there are no extraordinary episodes such as cold snaps or problems with French nuclear power plants. Gas futures suggest that prices will fall from the second quarter of 2022, which would relax electricity markets prices. Of course, the evolution of electricity market prices will also depend on the behaviour of the CO2 emission rights market. On the other hand, we expect that in 2022 the development of renewable energies will continue to gain momentum in Spain and that we will see many new MW of both photovoltaic and wind energy.