The invasion of Ukraine intensifies macrovolatility in energy markets

AleaSoft Energy Forecasting, February 25, 2022. As could be expected, Russia’s invasion of Ukraine caused a significant increase in energy markets prices and everything indicates that the situation will continue to worsen in the coming days. For Spain and for Europe as a whole, it is very important to give renewable energy and green hydrogen more boost to mitigate the uncertainty caused by the energy dependence.

Macrovolatility in energy markets as a consequence of geopolitical tensions

European energy markets already began to feel the effects of Russia’s invasion of Ukraine. The settlement prices of the TTF gas futures for the next month in the ICE market increased by 51% between February 23 and 24 and those of Brent in the same market settled at $99.08/bbl in the session of February 24 and exceeded the barrier of $100/bbl during the session of February 25, values that were not reached since the beginning of September 2014.

The European Union and the United States already announced economic and trade sanctions against Russia, which is one of the largest exporters of raw materials in the world. Among its exports are oil and gas, the fuels most used as energy sources. The consequences of these sanctions stressed all energy markets, especially in Europe, where Russia is the main gas supplier.

As a consequence, the electricity markets also reacted to this situation with increases. In the MIBEL market, the prices of Spain of February 25 increased by 17% compared to the previous day and reached €300/MWh at seven in the evening of that same day, an hourly value that was not reached since December 25, 2021. In other markets such as the French, the increases exceeded 30%.

In the OMIP market, Spain’s electricity futures for the next quarter increased by 37% between February 23 and 24. If the average of annual futures from 2023 to 2032 in that same market is analysed, the increase was 3.5%, although since the beginning of February the increase has been 20%. Due to the low liquidity of the electricity futures markets, such high variability, even in ten‑year averages, is common. Due to this marked variability, it is not advisable to use futures prices, which can undergo sudden changes from one day to the next, as markets prices forecasts when valuing a PPA (Power Purchase Agreement). 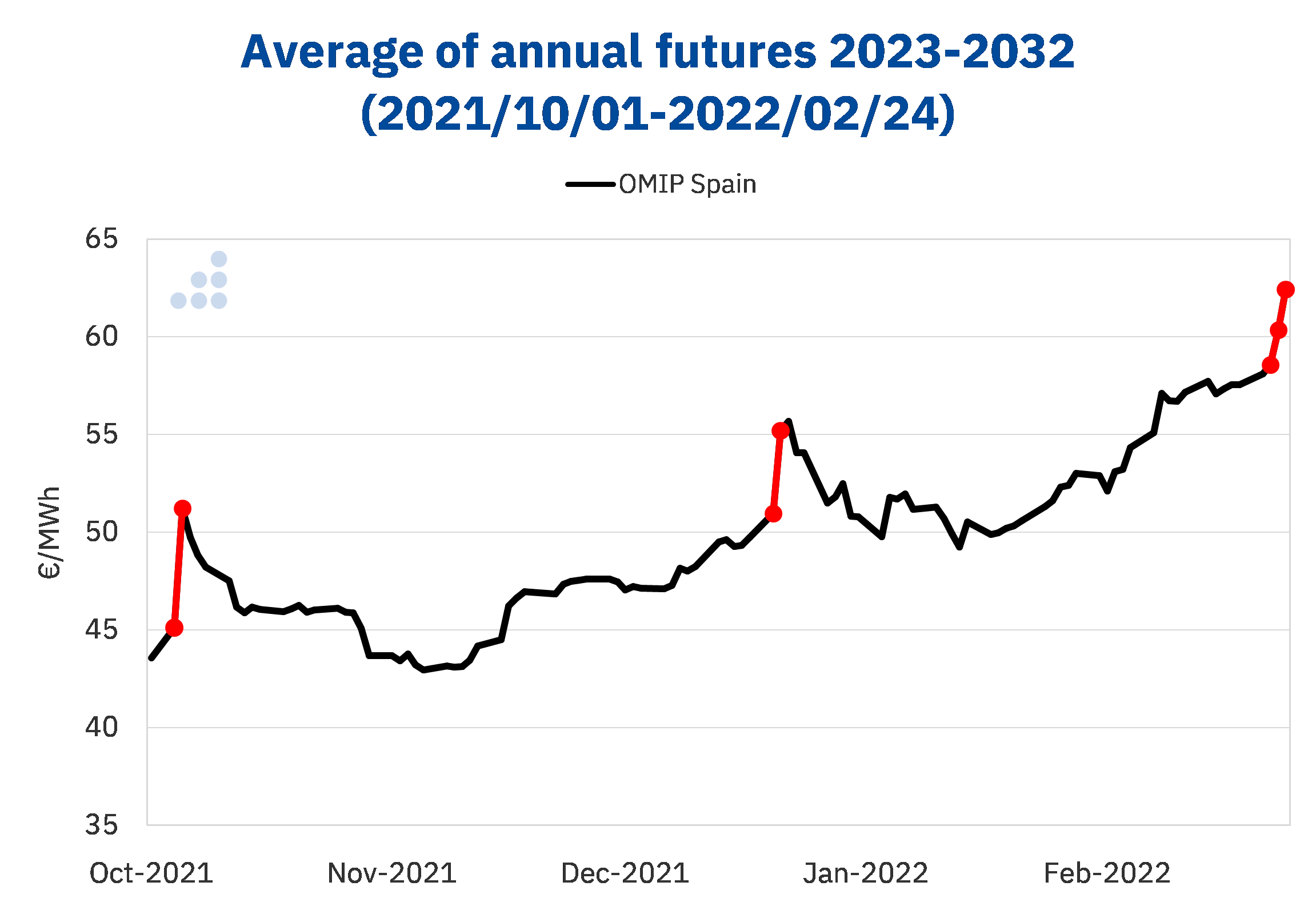 Source: Prepared by AleaSoft Energy Forecasting using data from OMIP. The most important price variations during the analysed period are highlighted in red.

Another significant fact in this context of uncertainty and macrovolatility is that, according to Enagás data of February 24, in the VIP Pirineos gas interconnection that connects Spain with France, the flow was working in the direction of exporting gas to France, when usually works in the opposite direction.

The data presented so far are only a summary of what happened on the first day of the invasion, but everything indicates that the situation may worsen even more in the coming days and add more uncertainty to the macrovolatility that the European energy markets have been registering in the last months.

How can effects of macrovolatility and geopolitical conflicts in the markets be mitigated?

Some of the main victims of the high prices and macrovolatility in the energy markets are large and electro‑intensive consumers, for whom it is increasingly urgent to have tools that allow them to assume the energy costs, such as a PPA or the self‑consumption option.

At the country level, this situation demonstrates the imperative need to be energy independent, taking advantage of the solar and wind resources available in Spain to generate electricity with renewable energies. Taking advantage of these renewable energies to generate green hydrogen and in this way going from importing to exporting energy. The State must prioritise all these issues by putting more resources to facilitate and support the projects more and give impetus to photovoltaic and wind energy. In addition, the administrative barriers that are currently slowing down the development of renewable energy projects must be eliminated, dedicating more resources to facilitate the procedures. And, given that the future lies in these technologies, both Spain and Europe should promote the manufacture of the equipment for the entire renewable energy industry chain in European territory.

They are ambitious goals, yes, but the effects that are being experienced as a result of the need to import energy from third countries should serve as an incentive to plan and work towards a future where Spain and Europe as a whole are less exposed to geopolitical conflicts.

The analysis of the macrovolatility of the energy markets and its evolution will be one of the topics that will be addressed in the next AleaSoft Energy Forecasting webinar, which will take place on March 17. Speakers from the consulting firm EY will also participate in the webinar, who will analyse the main novelties in the regulation of the Spanish energy sector, the renewable energy projects financing, the importance of PPA and self‑consumption, and the main considerations to take into account in the portfolio valuation.