AleaSoft Energy Forecasting, February 28, 2022. Although during the last days of February electricity markets prices increased due to the invasion of Ukraine and in some cases the highest hourly values so far this year were registered, in all markets the average for the month was lower than that registered in January, in correspondence with the evolution of gas prices. The decrease was also favoured by the decrease in demand and the increase in solar and wind energy production. CO2 and Brent prices rose.

The solar energy production increased in February 2022 in year‑on‑year terms in all analysed markets. Real data up to February 27 and AleaSoft Energy Forecasting’s forecasts for February 28 were used in the analysis. In the Iberian Peninsula, the production continued to increase in year‑on‑year terms, increasing in February 2022 by 121% in Portugal and 68% in Spain compared to that registered in February 2021. According to data from REN, the Portuguese system operator, between January 2021 and January 2022 the installed solar energy capacity increased by 506 MW, which represents an increase of 55%. In the case of Mainland Spain, the solar photovoltaic energy capacity increased by 3226 MW, 28%, between January 2021 and February 2022, while the solar thermal energy capacity did not change, according to data from the Spanish operator REE. In the rest of the main European markets, the increases compared to February 2021 were 24% in France, 14% in Italy and 9.6% in Germany.

Compared to the first month of 2022, the solar energy production in February also increased in all markets in correspondence with the increase in hours of sunshine. In this case, the largest increase was registered in the German market, where the production with this technology increased by 151%. In the rest of the markets, the increases were 48% in Italy, 31% in France and 19% in the Iberian market. 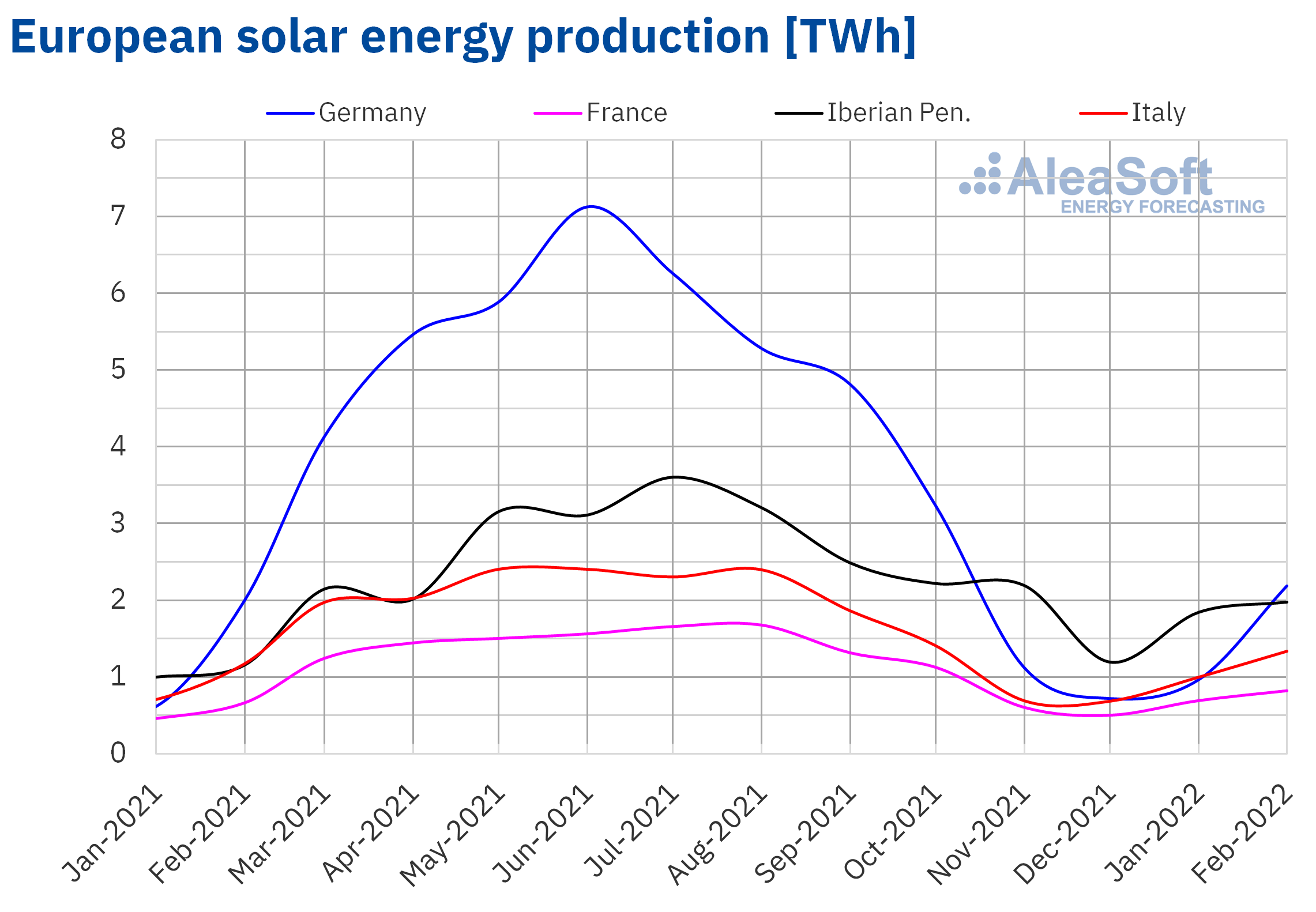 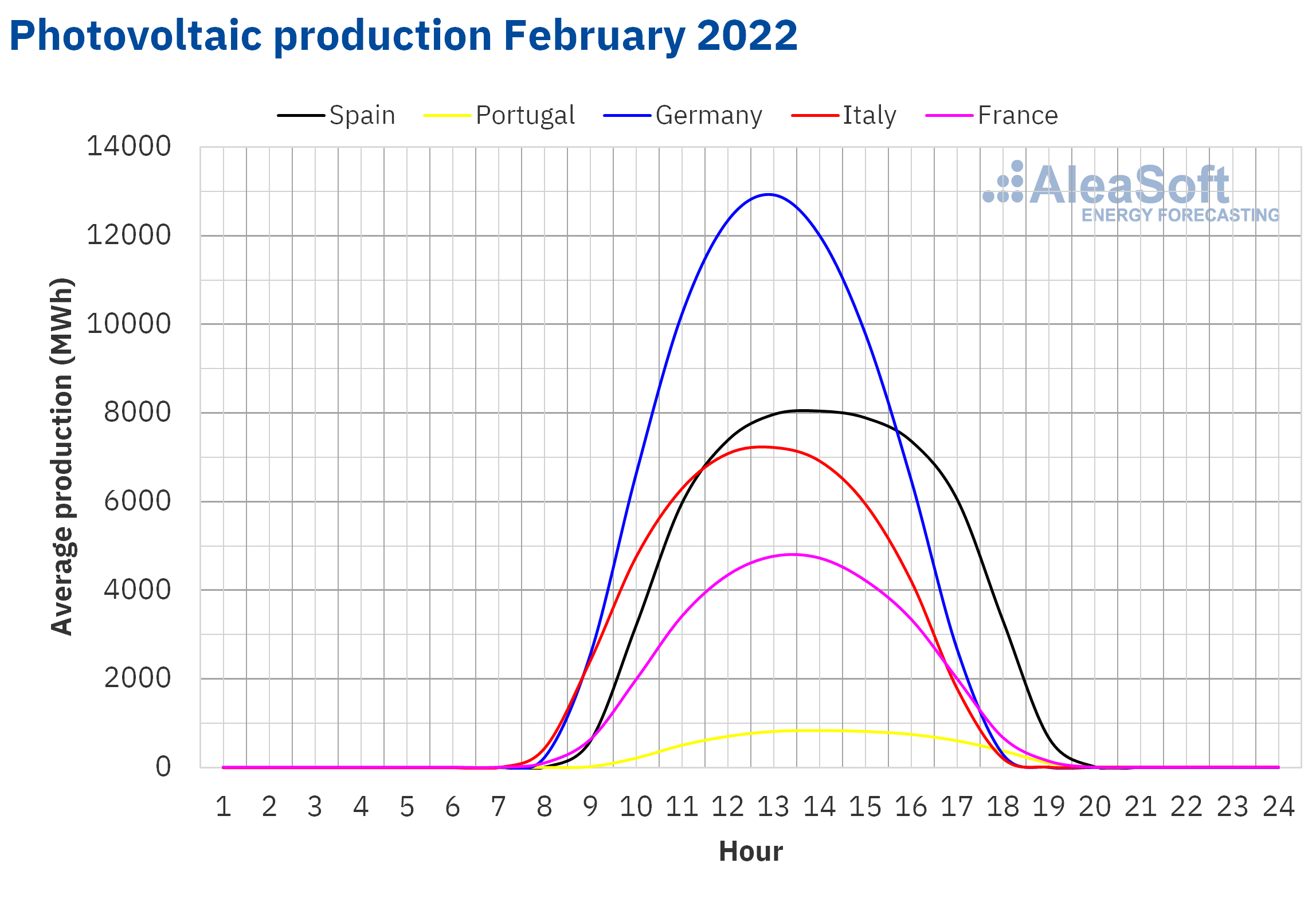 In the case of the wind energy production of February 2022, where real data up to the 27th and AleaSoft Energy Forecasting’s forecasts for the 28th were also taken into account, year‑on‑year increases were registered in most analysed markets. The largest increase was registered in the German market, which was 84%, followed by the rise of 33% in the Italian market and 21% in the French market. On the other hand, in the Iberian Peninsula, the wind energy production decreased, 40% in Portugal and 27% in Spain.

Compared to the previous month, the production of February 2022 registered an increase of 78% in the French market, followed by the increase of 42% in the German market. However, in the rest of the markets there were falls compared to the wind energy production of January 2022, of 0.8% in Italy and 8.6% in the Iberian Peninsula. 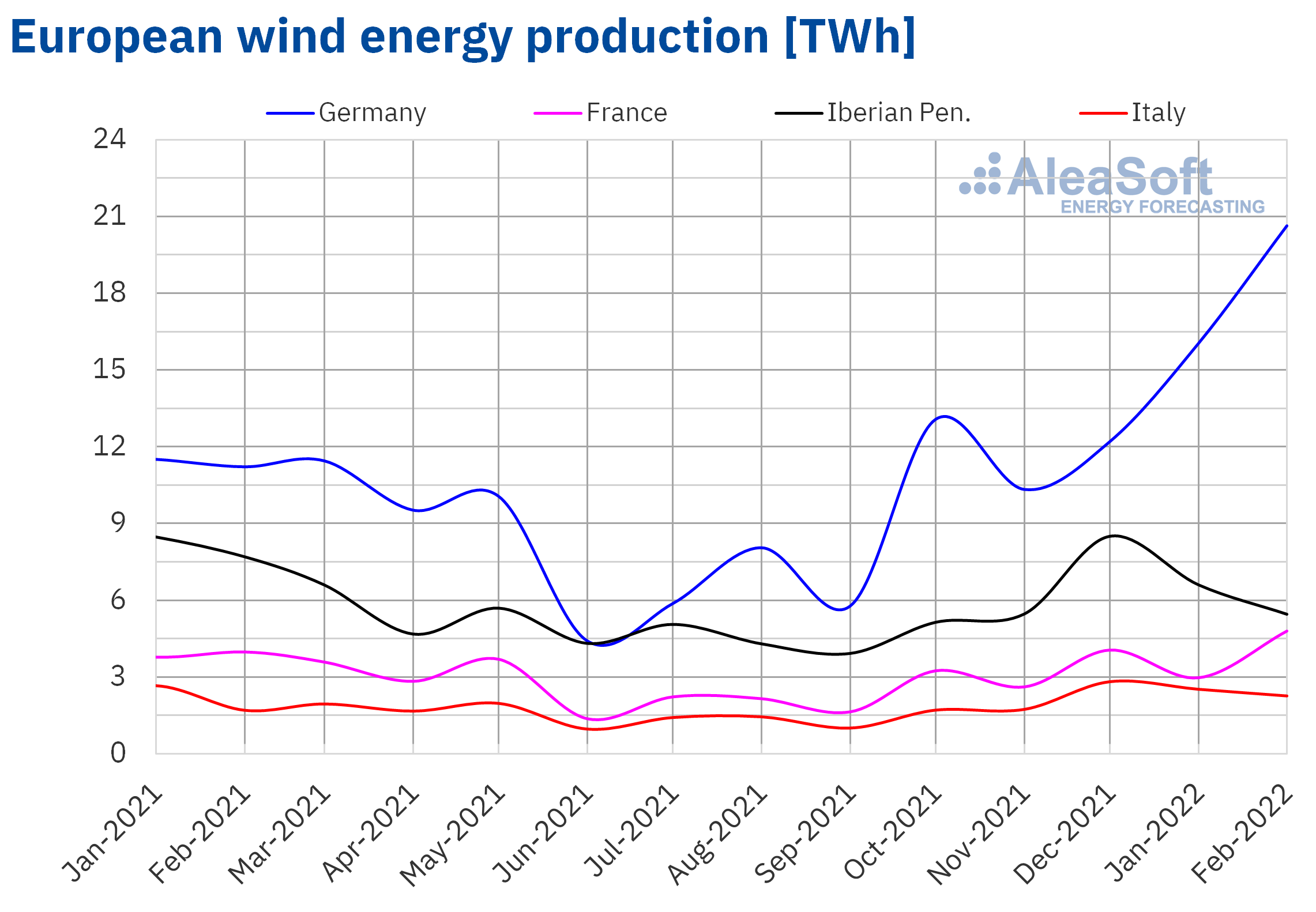 The electricity demand in February 2022 decreased in most European electricity markets compared to the same month of the previous year, according to real data until February 27, 2022 and the AleaSoft Energy Forecasting’s forecasts of February 28, 2022. The year‑on‑year falls in demand in the French and Spanish markets were 1.2% and 0.5%, respectively. In the British market, the downward trend of the last three years continued and fell by 4.7% in year‑on‑year terms. The market of the Netherlands registered the most notable decrease, with a decrease of 8.2% compared to February 2021. On the other hand, the markets of Germany, Portugal and Italy had a different behaviour from the rest and registered increases in demand that were between 1.7% of Italy and 2.7% of Portugal.

There were also drops in demand in most European markets in the comparison of February 2022 with respect to January of the same year, according to real data until February 27, 2022 and the AleaSoft Energy Forecasting’s forecasts of February 28, 2022. Significant decreases of 9.6% and 8.6% were registered in the French and Dutch markets, respectively. These variations were followed by that of the British market, where the demand fell by 7.4% compared to the previous month. The rest of markets where the demand fell registered decreases of less than 2.0%. The markets of Italy and Germany were the exception, as the demand increased by 2.1% and 1.6% respectively. 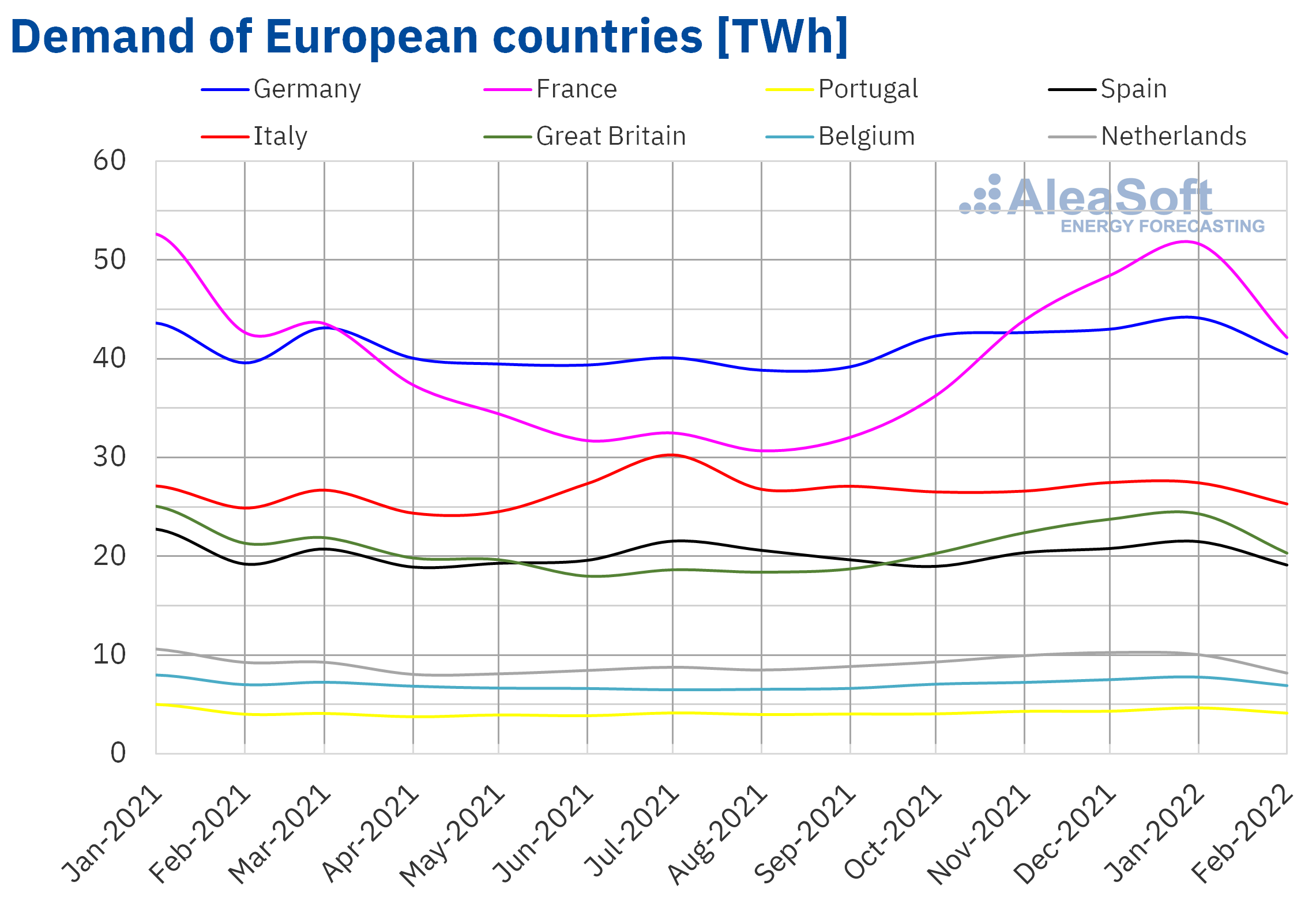 In the month of February 2022, the monthly average price in almost all European electricity markets analysed at AleaSoft Energy Forecasting was above €160/MWh, exceeding €200/MWh in some cases. The exceptions were the Nord Pool market of the Nordic countries, with an average of €90.25/MWh and the EPEX SPOT market of Germany, with €131.61/MWh. In contrast, the highest monthly average price, of €211.69/MWh, was that of the IPEX market of Italy, followed by that of the MIBEL market of Portugal, of €200.72/MWh. In the rest of the markets, the averages were between €162.64/MWh of the EPEX SPOT market of Belgium and €200.22/MWh of the MIBEL market of Spain.

Compared to the month of January 2022, in February the average prices fell in all European electricity markets analysed at AleaSoft Energy Forecasting. The largest fall, of 22%, was registered in the German market, while the smallest decreases were those of the MIBEL market of Portugal and Spain, of 0.6% and 0.7% respectively. The rest of the markets had price decreases between 3.2% of the Nord Pool market and 15% of the Belgian market.

However, if average prices for the month of February are compared with those registered in the same month of 2021, prices increased significantly in all markets. The largest price rises were those of the Portuguese and Spanish markets, of 612% and 603% respectively, an increase that was favoured by the fact that in February 2021 the MIBEL market prices were the lowest in the continent. In the rest of the markets, the price increases were between 93% of the Nord Pool market and 279% of the French market.

In the month of February, gas and CO2 emission rights prices continued to be high. But, despite the fact that in the last days of February gas prices increased sharply due to fears of interruptions in supply, the average price of gas fell compared to the previous month. This favoured the decrease in prices in the European electricity markets in February compared to January. On the other hand, the demand fell in most markets. In addition, the general increase in solar energy production and the increase in wind energy production in Germany and France also contributed to the decreases registered compared to January 2022. 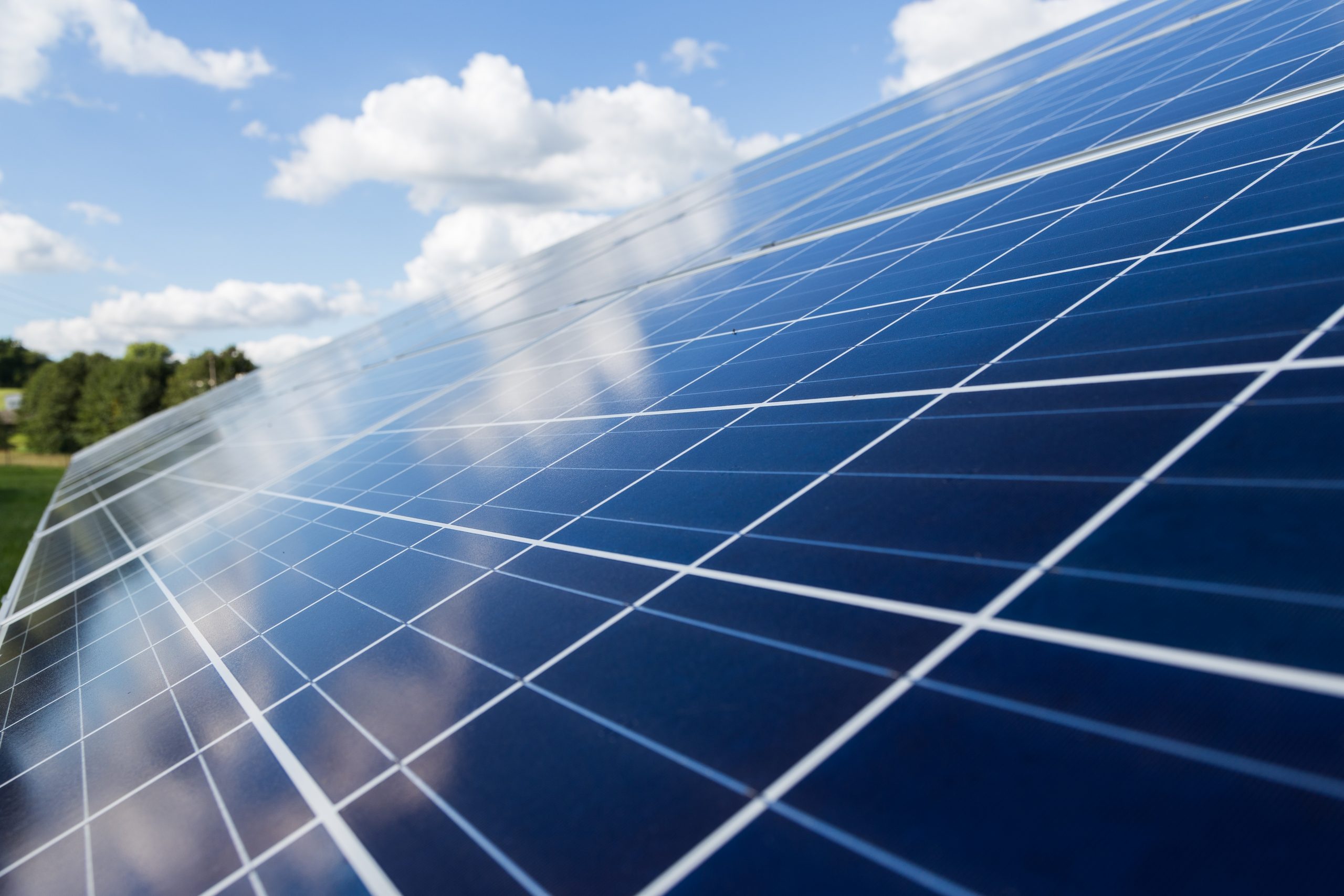 In contrast, in February 2022 gas prices were more than four times higher than those of the same month of the previous year and also the CO2 emission rights prices were much higher. This favoured the year‑on‑year increase in European electricity markets prices. In the case of the MIBEL market, the decrease in wind energy production in the Iberian Peninsula contributed to this market registering the highest price increases compared to February 2021. 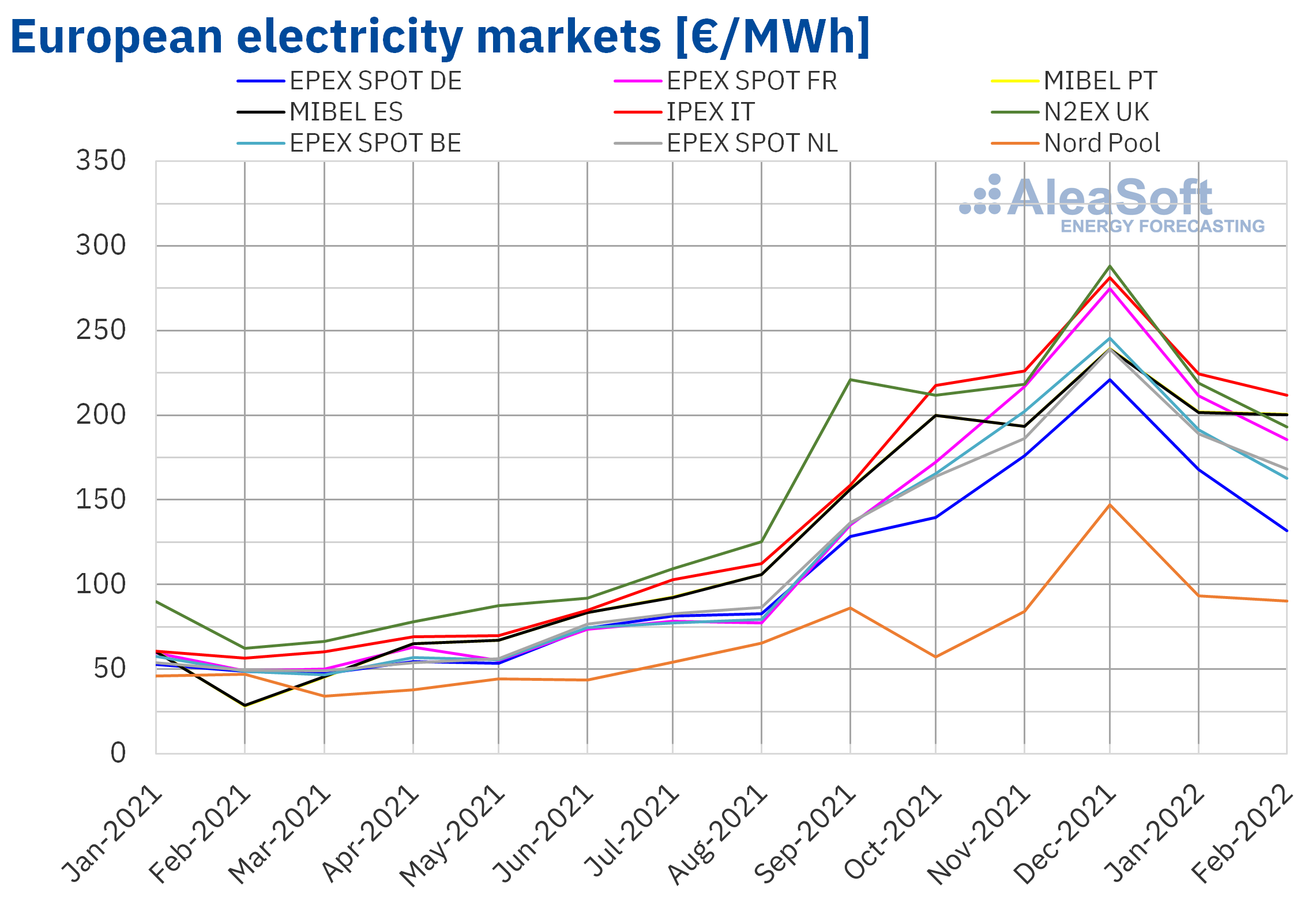 Although during most of the month of February 2022 the electricity futures prices for the second quarter of the year registered a downward trend, in the session of Friday, February 25, they registered a general rise compared to the value of the first Friday of the month. The largest increases were registered in the ICE and NASDAQ markets of the Nordic countries, which had an increase of 54% and 27% respectively. In the rest of the markets analysed at AleaSoft Energy Forecasting, the increases were between 6.0% of the EEX market of the United Kingdom and 15% of the EEX market of Spain and the ICE market of the Netherlands. 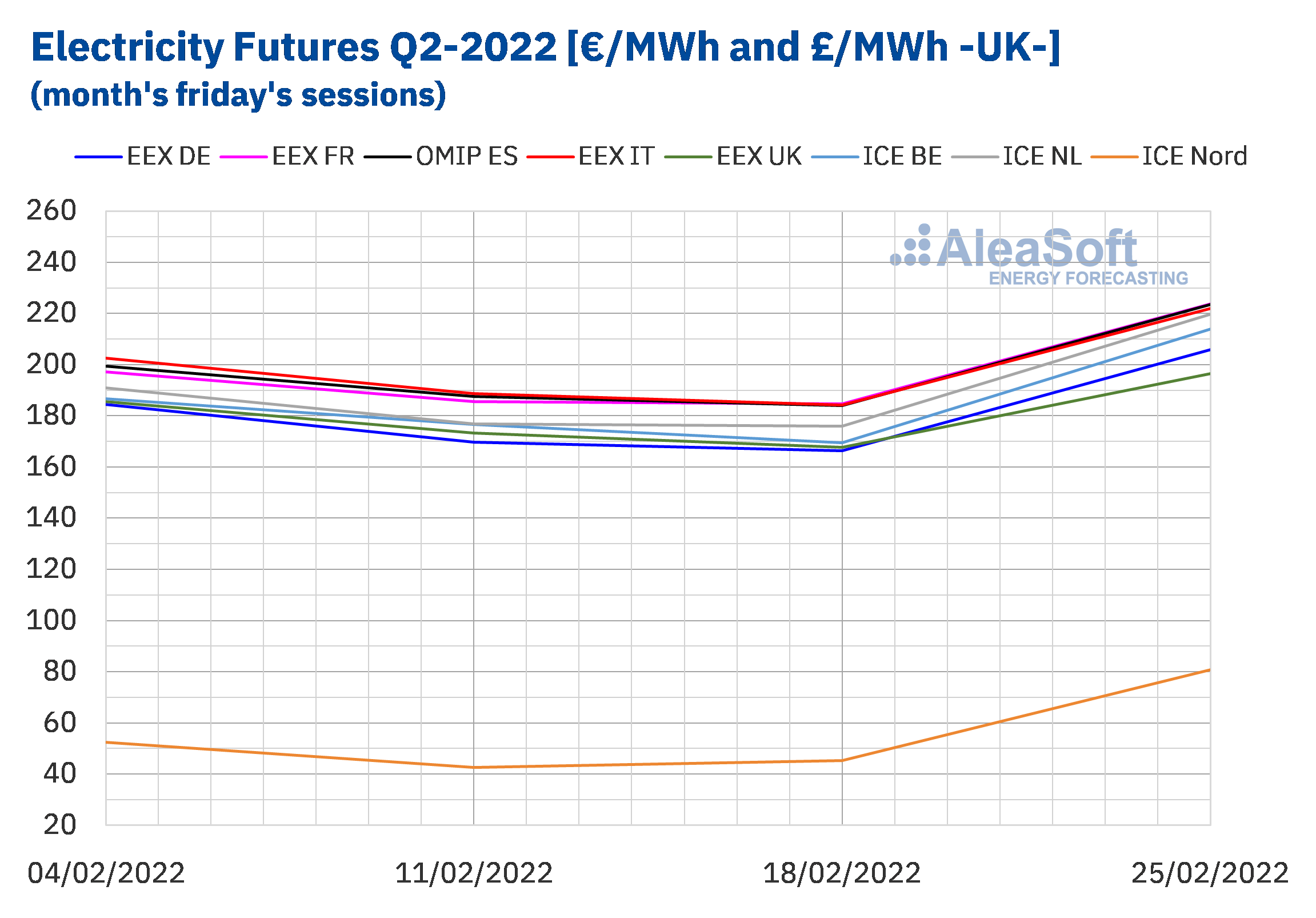 The electricity futures prices for the next year 2023 had a similar behaviour in the analysed period. For this product, the largest increases between the settlement price of the first and last Friday of February were also registered in the ICE and NASDAQ markets of the Nordic countries, which were 18%. In the rest of the markets, the increases were between 1.9% of the ICE market of Belgium and 16% of the EEX market of Spain. 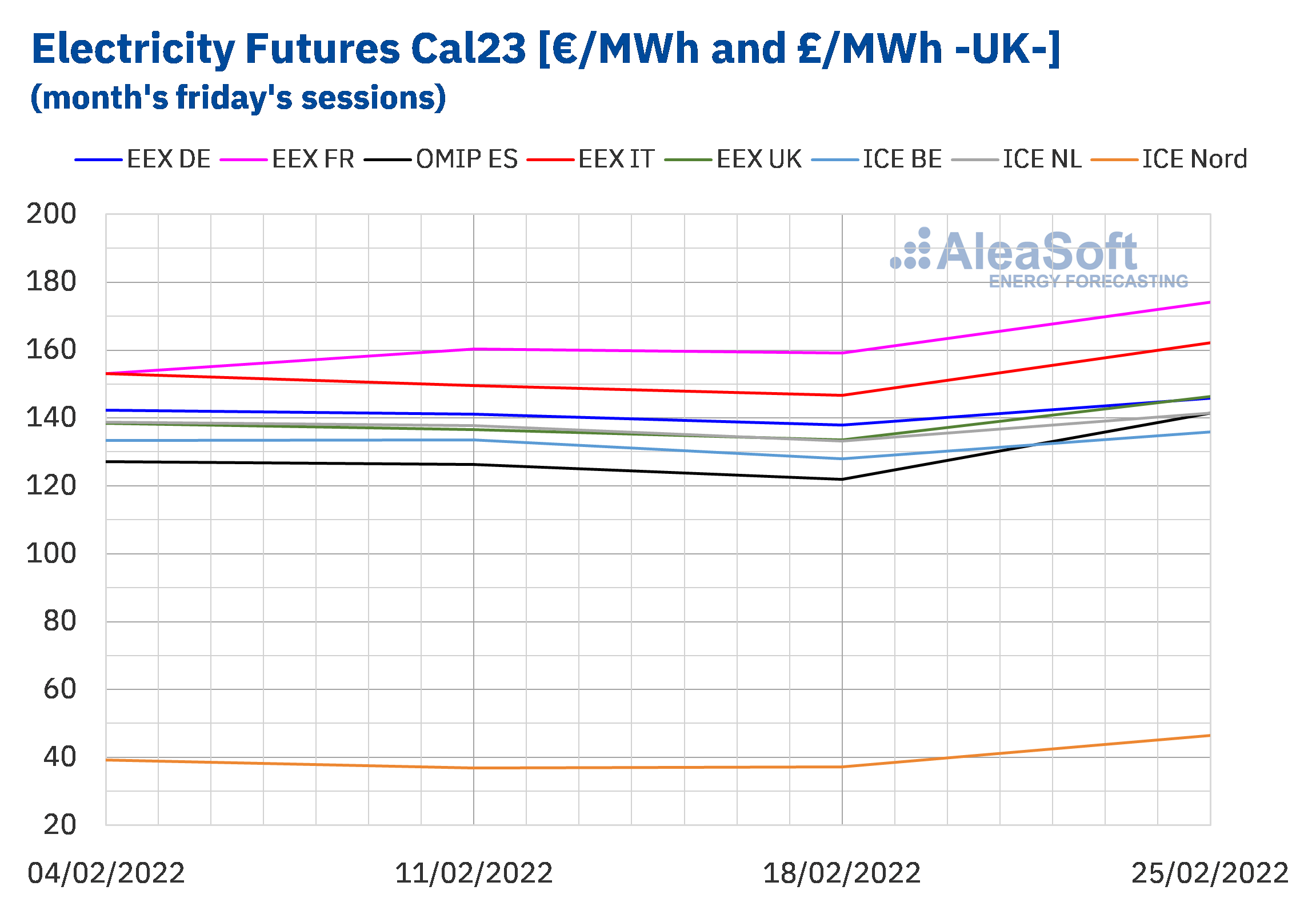 Brent oil futures for the Front‑Month in the ICE market registered settlement prices above $90/bbl for almost the entire month of February. The monthly maximum settlement price, of $99.08/bbl, was reached on Thursday, February 24, influenced by the start of the invasion of Ukraine by Russia.

The evolution of the conflict between Russia and Ukraine influenced the evolution of prices during the month of February. Despite the fact that the sanctions imposed so far include exceptions for oil and gas trade, the increase in tensions favoured the upward trend in futures prices. The behaviour of prices in the coming days will depend on the evolution of the conflict. The next OPEC+ meeting, scheduled for March 2, might also exert its influence on futures prices. In this meeting it has to be decided whether to maintain the agreed production increases.

Regarding the CO2 emission rights futures in the EEX market for the reference contract of December 2022, they reached an average price of €91.66/t in February, 8.4% higher than those of the previous month, of €84.59/t. If compared to the average for the month of February 2021 for the reference contract of December of that year, of €38.22/t, the average for February 2022 is 140% higher.

During the month of February 2022, the settlement prices of CO2 emission rights futures remained between €86/t and €97/t, reaching a historical maximum settlement price of €96.93/t on Tuesday, February 8. 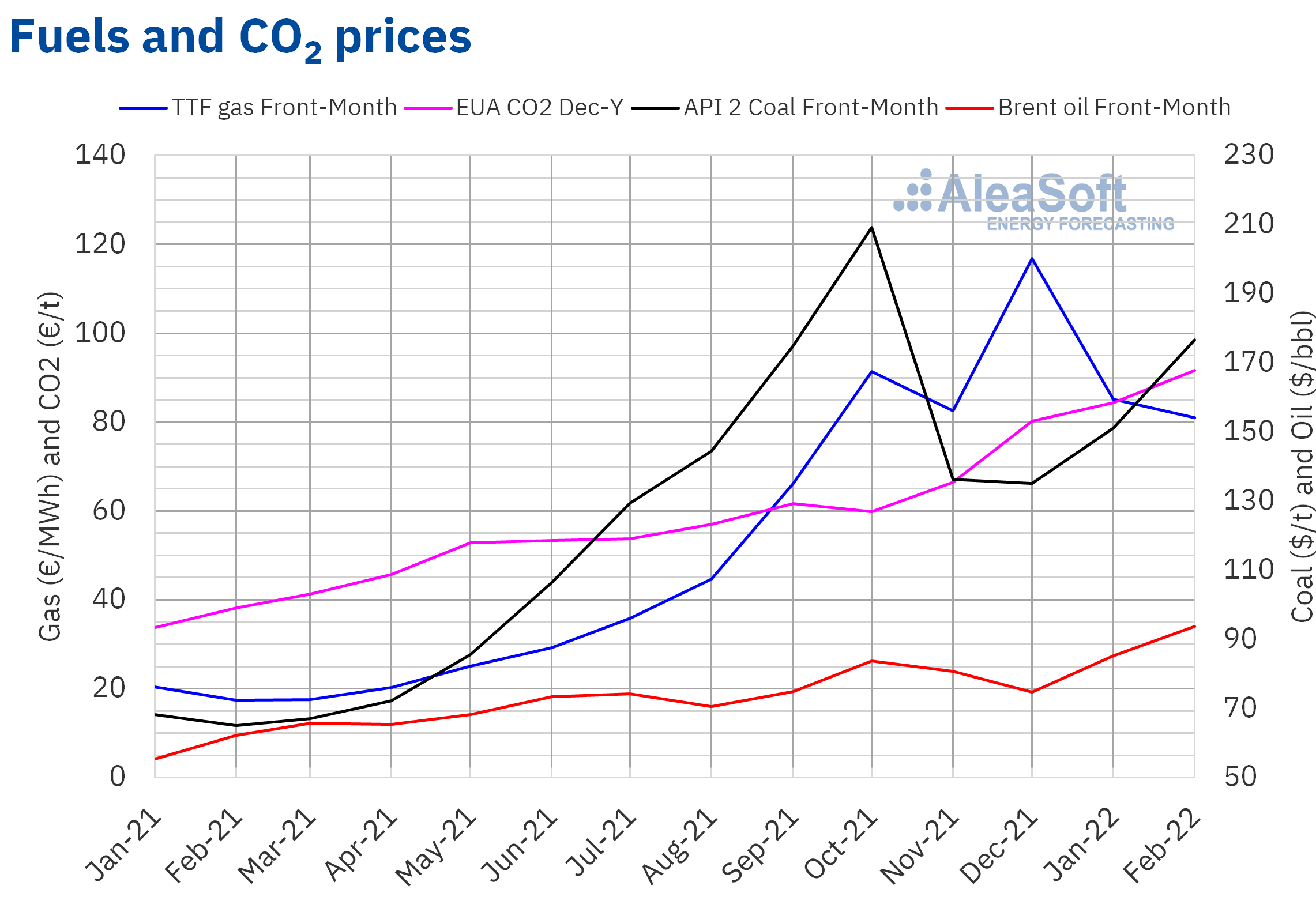 The invasion of Ukraine by Russia intensified macrovolatility in energy markets. To cite an example, the average of the annual electricity futures for the period 2023‑2032 increased for this reason by 3.5% between the sessions of February 23 and 24 and 20% from the beginning of February to February 24. This is something that happened on other occasions because the low liquidity of these futures causes them to have great variability. This variability due to lack of liquidity is critical when, for example, using the futures markets curve for the valuation of a PPA (Power Purchase Agreement). In this case, it is better to have stable and coherent long‑term market price curves forecasts based on scientific methods and of proven quality.

In the next AleaSoft Energy Forecasting’s webinar, which will take place on March 17, the usual analysis of the evolution of the energy markets will be carried out, taking into account current events. On this occasion, there will be the participation of speakers from EY to analyse the current regulatory situation in Spain and its perspectives, the renewable energy projects financing, the importance of PPA and self‑consumption, as well as the fundamental aspects to take into account in the renewable energy portfolio valuation.