AleaSoft, August 2, 2021. Prices in all European markets rose in July, reaching the highest monthly average in history in several markets. In Italy and the United Kingdom, the monthly price exceeded €100/MWh. There were also records in July in gas and CO2 prices and increases in the electricity futures markets. In the markets of Spain and Portugal, the solar energy production was the highest in history and the wind energy production of Spain, France and Italy was the highest in a month of July so far.

The solar energy production of July registered historical highs in the markets of Spain and Portugal, adding 3407 GWh and 210 GWh respectively. These values represent a year‑on‑year increase of 28% in Spain and 40% in Portugal. When comparing the production of July with that of June of the same year, the increase in Spain and Portugal was 13% and 15% in each case. In the case of Spain, both solar photovoltaic energy and solar thermal energy registered in July the historical maximum of production so far, of 2528 GWh and 880 GWh respectively.

When doing the year‑on‑year analysis of the solar energy production in other European markets, Germany registered a slight increase of 0.3% while in Italy and France it fell by 9.3% and 0.4% respectively. If the comparison is made with respect to June 2021, in France the production increased by 2.7%, while in Italy it fell by 7.3% and in Germany by 15%. 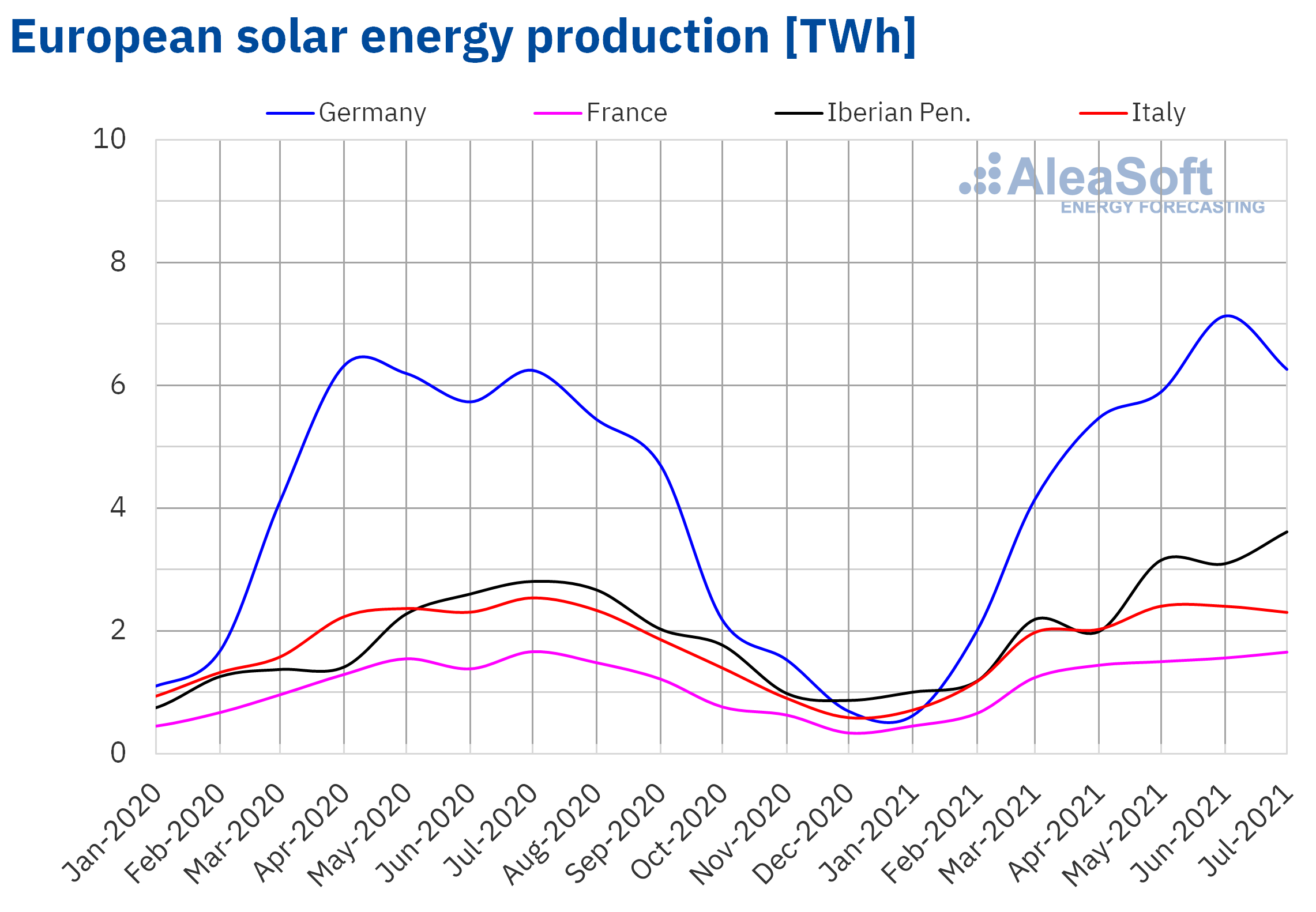 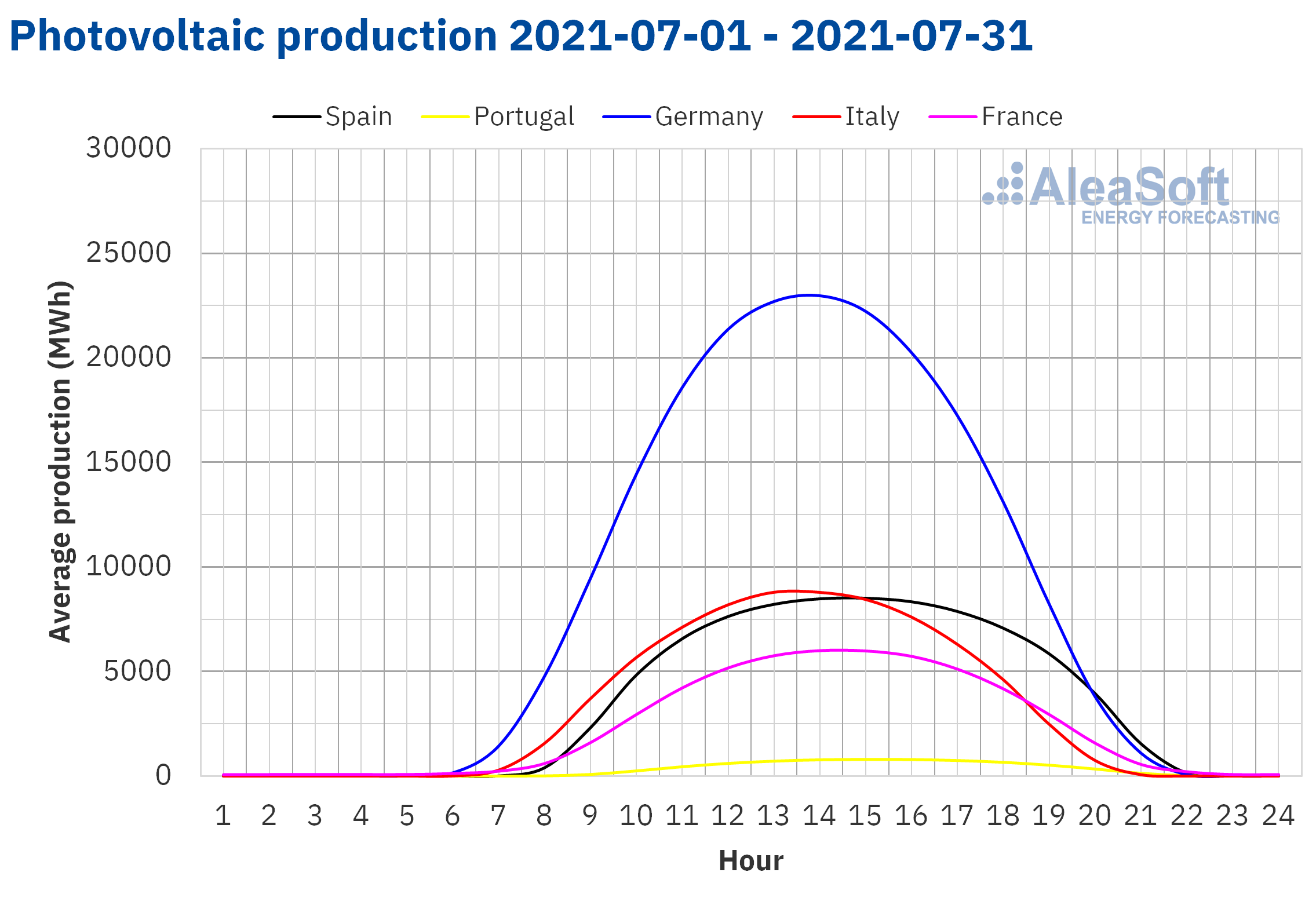 The wind energy production increased in July in most of the European markets analysed at AleaSoft compared to June 2021 and July 2020. The only exception was the German market where the production fell by 15% in year‑on‑year terms. The largest increase compared to June 2021 was registered in the French market, which was 7.1%. In the case of the comparison with respect to July 2020, the largest increase was that of the Italian market, with 45%.

In the markets of Spain, France and Italy, the wind energy production of July 2021 is the highest in a month of July so far. 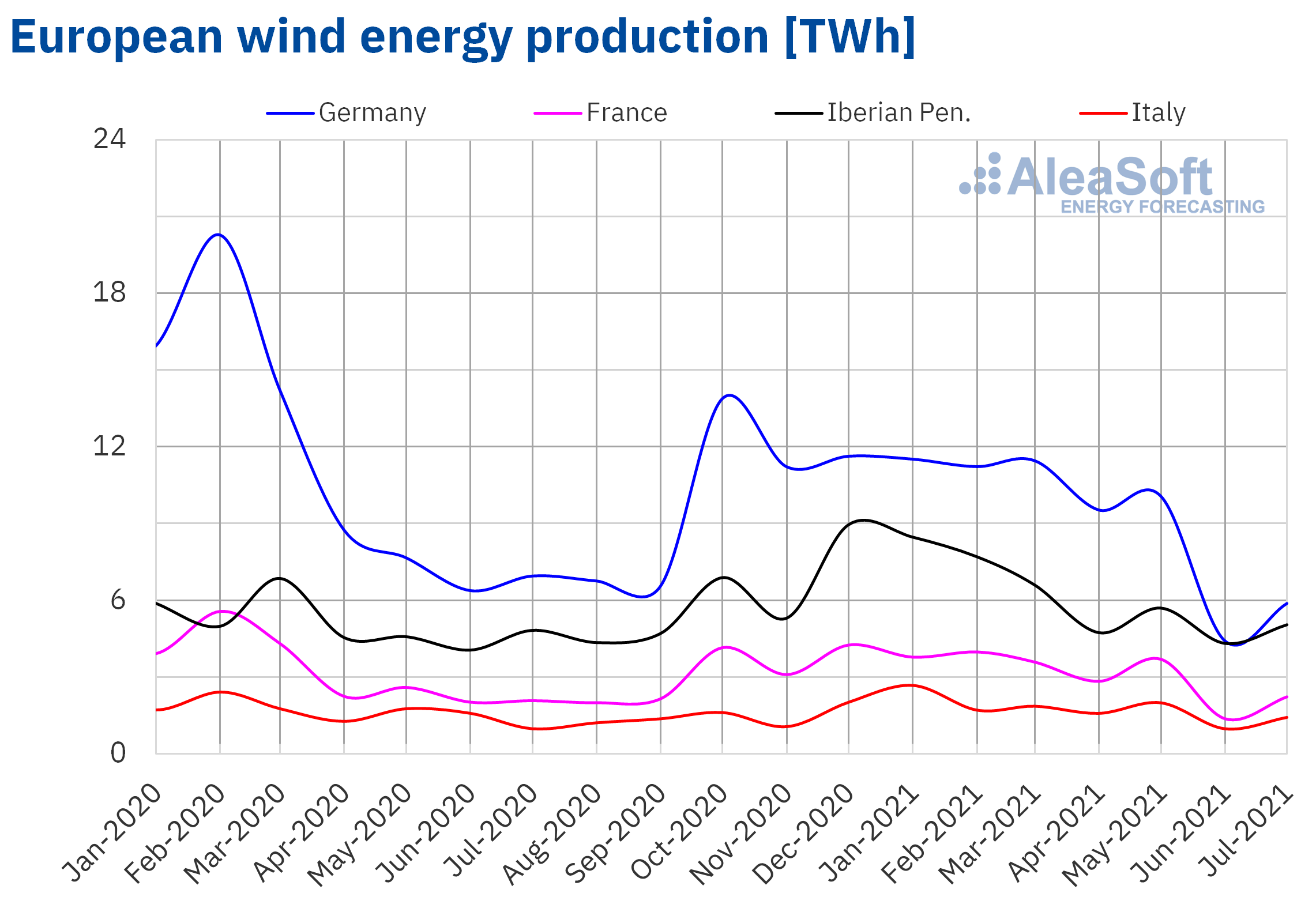 The evolution of the electricity demand in Europe during the month of July 2021 was largely influenced by the behaviour of the temperatures. In the markets of Germany, Great Britain, Italy and the Netherlands, the electricity demand increased year‑on‑year in line with the increase in temperatures. The demand of Belgium also increased although in this case there was little variation in temperatures. The largest increase, of 7.5%, was registered in the German market, closely followed by the market of Great Britain where the demand increased by 7.3%. On the other hand, the demand fell year‑on‑year in the markets of France, Spain and Portugal, the latter being the market with the largest drop, of 1.4%.

If the demand of July 2021 is compared with that of June of the same year, increases were registered in the markets of Portugal, Spain, Italy, Great Britain and the Netherlands, also in coherence with the increase in temperatures. In this case, the largest increase was that of the Italian market, of 7.1%. However, the demand fell in Germany, France and Belgium, the latter with the largest decrease, of 5.2%.

In the AleaSoft‘s energy markets observatories, the electricity demand as well as other variables of the markets can be monitored with data that are updated daily. 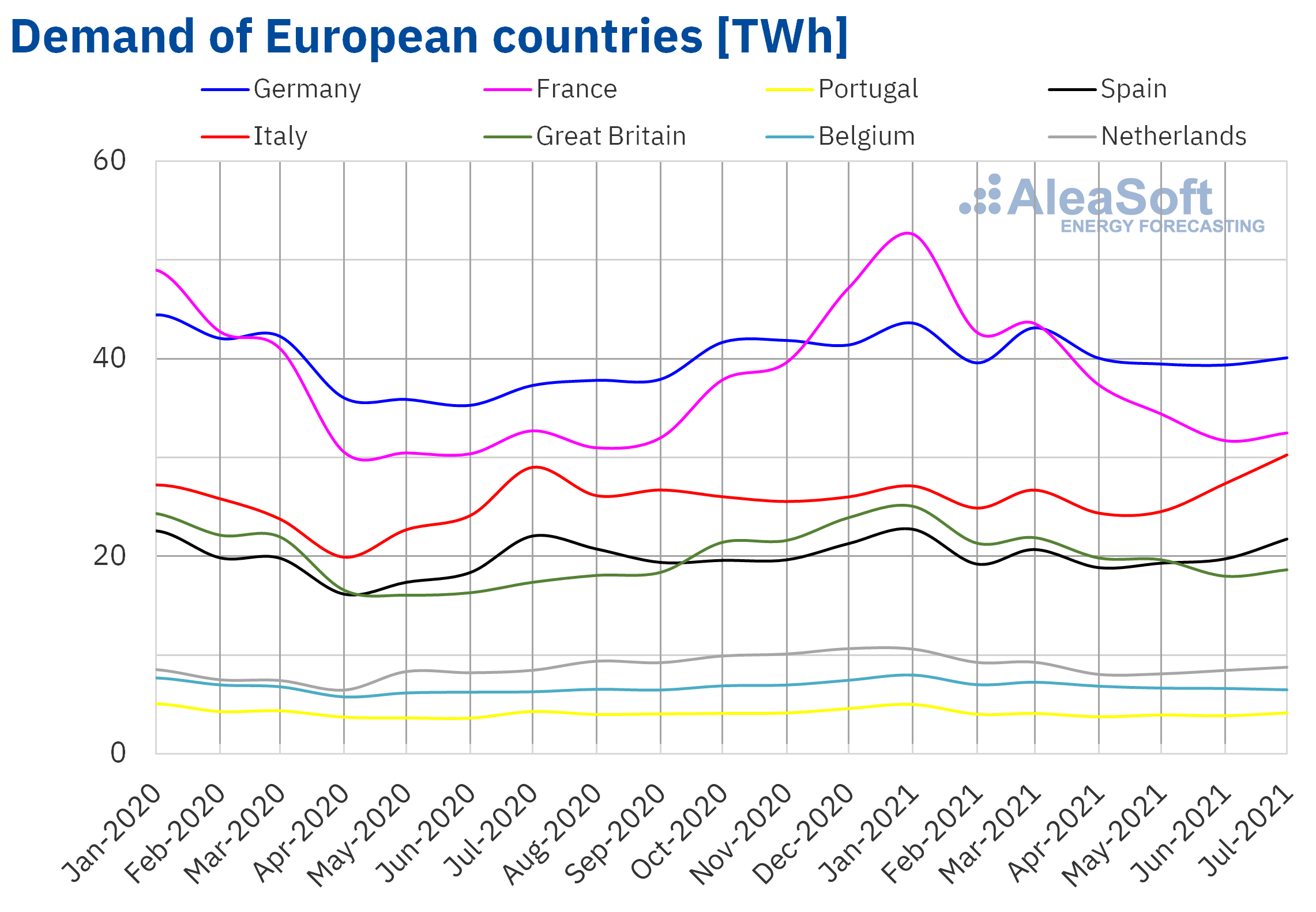 In July 2021, the monthly average price was above €75/MWh in almost all the European electricity markets analysed at AleaSoft. The exception was the Nord Pool market of the Nordic countries, with an average of €53.99/MWh. On the other hand, the highest monthly average price, of €109.86/MWh, was that of the N2EX market of the United Kingdom, followed by that of the IPEX market of Italy, of €102.66/MWh. In the rest of the markets, the averages were between €77.42/MWh of the EPEX SPOT market of Belgium and €92.60/MWh of the MIBEL market of Portugal.

Compared to June 2021, in July average prices rose in all the European electricity markets analysed at AleaSoft. The largest price increases, of 24%, 21% and 20%, were registered in the Nord Pool, IPEX and N2EX markets respectively, while the smallest price increase, of 4.0%, was that of the Belgian market. The rest of the markets had price increases between 6.6% of the French market and 11% of the MIBEL market of Spain and Portugal.

If the average prices of the month of July are compared with those registered in the same month of 2020, there were significant price increases in all markets. The largest price increase was that of the Nord Pool market, of 2198%. In the rest of the markets, the price increases were between 135% of the French market and 237% of the British market.

The high prices of July broke records in all the analysed markets. The Belgian market had the highest average since November 2018, while in the markets of France, the Nordic countries and Germany the July average was the highest since February 2012, May 2011 and October 2008, respectively. In the rest of the markets, in July 2021, the highest monthly average prices in history were reached. 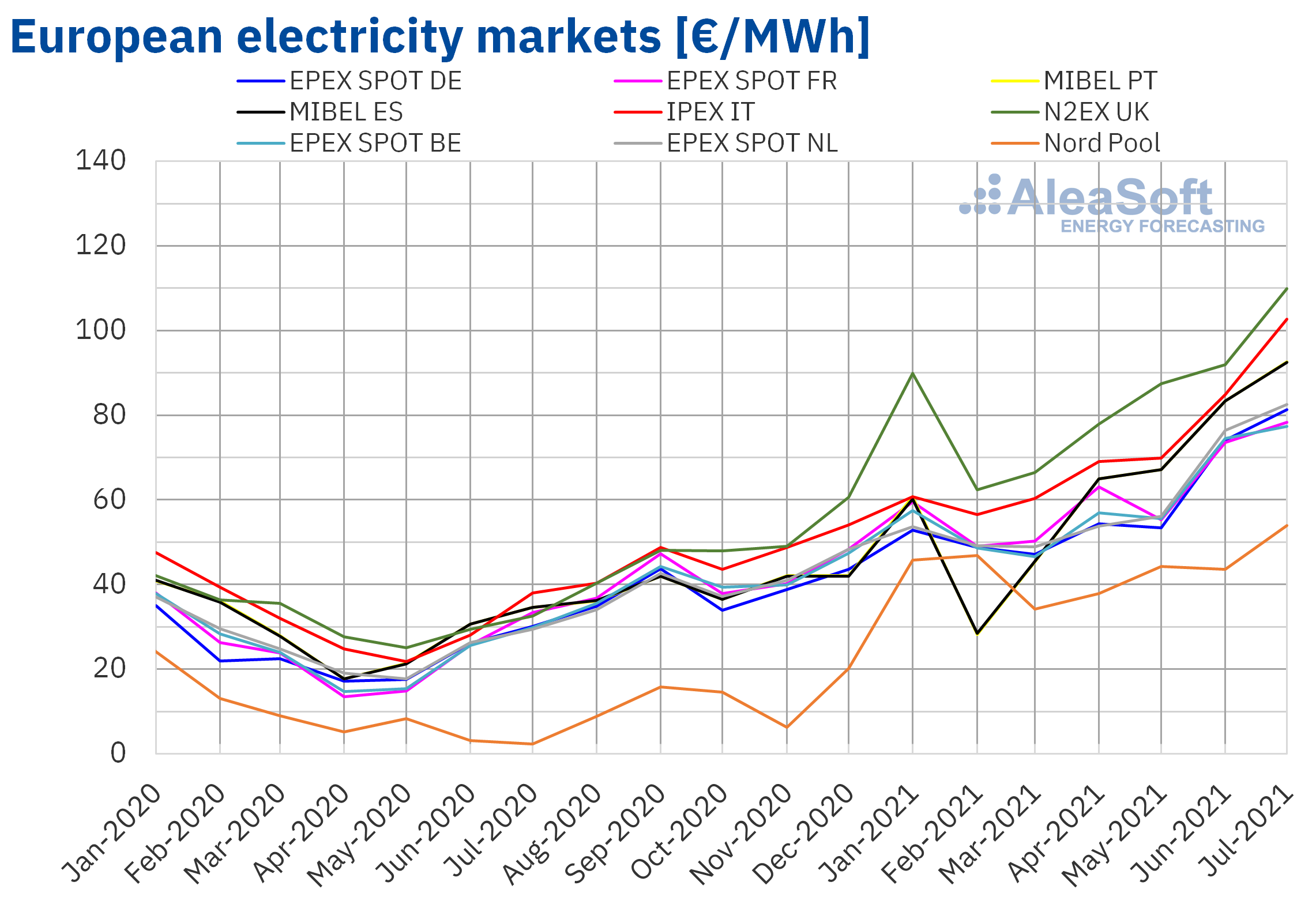 During the month of July 2021, the electricity futures prices for the last quarter of the same year registered a general increase in the European markets analysed at AleaSoft. The ICE market of the Nordic countries was the one with the highest rise with 17%, closely followed by the NASDAQ market of the same region with a 16% increase between the first and last sessions of the month. The EEX market of France was the one in which there was less variation between these sessions, with a 0.7% increase at the end of the month.

On the other hand, the electricity futures prices for the next year 2022 had a different behaviour. While in most European markets prices also rose as with the quarterly product between the sessions of July 1 and 30, in the case of the Iberian Peninsula the prices of these futures fell. The EEX market of Spain registered a decrease of 2.8%, while the OMIP market of Spain and Portugal marked a decrease of 2.3% for both countries. In the case of the markets in which the price increased, the largest rise was in the NASDAQ market of the Nordic countries, with an increase of 7.7%.

During the first weeks of July, the evolution of the OPEC+ negotiations on the increase of its production in the coming months had an influence on prices. These negotiations were blocked in the first week of July by the UAE’s request for an increase in its domestic production quota, reflecting its greater production capacity. Finally, on Sunday, July 18, the OPEC+ agreed the progressive increase of its production starting in August, evaluating the results and the degree of compliance of the member countries in December. The objective of this increase in production is adapting it to the progressive recovery of the demand, avoiding a disproportionate increase in prices that might jeopardise world economic growth. The agreement reached favoured that on Monday, July 19, prices fell by 6.8% compared to the previous session, although they subsequently recovered.

On the other hand, the demand continued to recover in July, favoured by the increase in mobility. However, the expansion of the Delta variant of the coronavirus continues to threaten this recovery.

After reaching the highest monthly average at least since October 2013, the TTF gas futures prices for M+1 might continue to rise as the gas reserve levels in Europe remain low for the time of year.

Regarding the CO2 emission rights futures in the EEX market for the reference contract of December 2021, on July 5 they registered the monthly maximum settlement price, of €57.87/t, which was the highest high in the last year. On the other hand, the monthly minimum settlement price, of €50.81/t, was registered on July 22. At the beginning of July, the CO2 emission rights futures prices were influenced upwards by the leaks to the press about the measures of the European Commission to reach the emission reduction targets. These measures were officially announced on July 14. 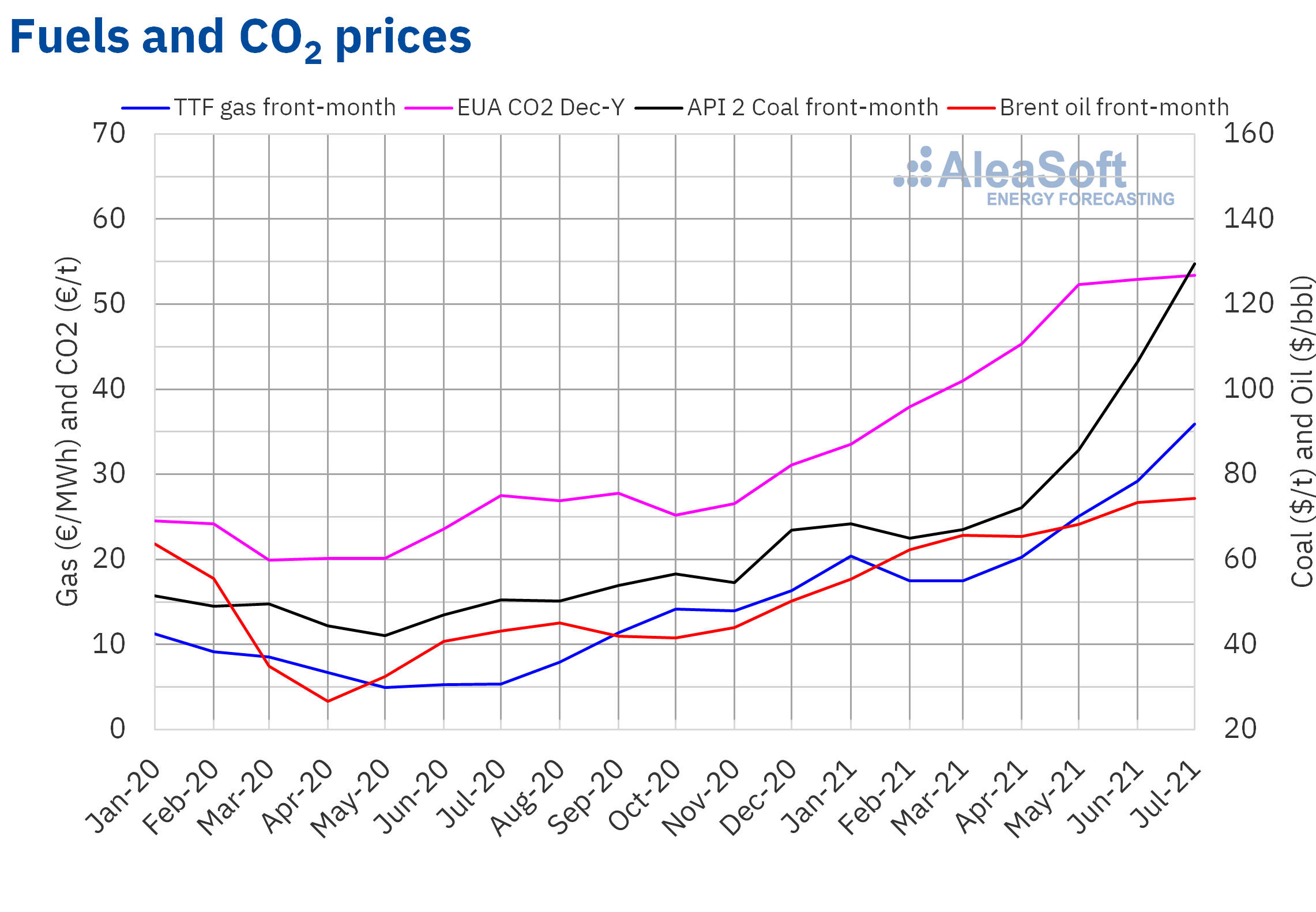 The situation of high prices in the electricity markets highlights the need for an energy purchase and sale strategy based on the diversification, which allows minimising the market prices risks. For this, it is necessary to have electricity markets prices forecasts in the different horizons. Currently AleaSoft is carrying out special promotions of the short‑, mid‑ and long‑term forecasting for most of the European electricity markets.

At AleaSoft, the webinar “Energy markets in the recovery from the economic crisis one year later” is being organised, which will be held on October 7. On this occasion, there will be the participation of speakers from Deloitte, in addition to those from AleaSoft. The analysis of the evolution of the European energy markets will have a year‑on‑year perspective, taking into account that this webinar will take place one year after the one held in October 2020, in which speakers from Deloitte also participated. In addition, the prospects on the renewable energy projects financing and the importance of the forecasting in audits and portfolio valuation will be analysed.