Brent oil futures prices for May 2019 in the ICE market stabilised in a price range between 65 $/bbl and 67 $/bbl since February 15, when it rose to 66.22 $/bbl, surpassing the range in which it had been since January 9 with values between 60 $/bbl and 62.50 $/bbl. If international conditions of tension do not deteriorate and OPEC does not adopt new restrictions on production, the price of Brent oil for the coming weeks should resume the path between 62.50 $/bbl and 60 $/bbl. In AleaSoft it is considered that 60 $/bbl is a market equilibrium value for the beginning of spring. At the longer term, in AleaSoft it is estimated that the price will not have a clear upward or downward trend, based on the latest estimates of the International Energy Agency that foresees an increase in production in the United States, and also an increase in demand worldwide, but with a slightly slowing tendency.

The TTF gas futures in the ICE market for April settled on Friday, March 8, at the lowest price in a year, 16.73 €/MWh, a value that was not reached since mid-March 2018. In the coming days it could achieve a certain stability around 16 €/MWh and then continue with the seasonal downward trend corresponding to spring with higher temperatures and lower demand. However, from AleaSoft it is advised to monitor the political situation in Algeria, because the emergence of problems in the supply of gas to Europe could stress the market and trigger price increases.

In the last year, the evolution of API 2 coal future prices for the month of April in the ICE market remained very aligned with the TTF gas futures prices for the same period. However, since February 7, the futures for April in the case of API 2 remained stationary around 73 $/t while gas in that period had a slight negative slope. In the case of coal, it is also expected that with the highest temperatures in the coming days a gradual decline in prices will begin.

Analysing the last three years of the evolution of the CO2 emission rights futures prices for the reference contract of December 2019 in the EEX market, it can be divided in three different periods. The first period starts in February 2016 and lasts until the beginning of June 2017 with prices oscillating in a band between 5 €/t and 6 €/t. In this first period, electricity market prices were very low in Europe during the first part of 2016, taking advantage of this circumstance of very low CO2 emission prices. In the second period that begins on June 1, 2017 with a price of 5.20 €/t, it reaches 25.56 €/t on September 10, 2018, that is, in fifteen months the price of CO2 multiplied by five. This rise is transferred to the electricity markets prices because they are based on a marginal price. From September 2018 to the current date, price have been oscillating in an average range between 18 €/t and 24 €/t although in some cases it dropped to 16 €/t and in others it reached again 25 €/t. In the last three months the CO2 emission rights prices were between 19 €/t and 25 €/t, keeping the balance between 20 €/t and 22 €/t that we at AleaSoft consider as the stability values for the next weeks.

In the second week of March a similar pattern of the previous week is present and in AleaSoft we consider that it can be quite stable in the period from March 1 to March 20. In general, the temperature was stable since the last days of February while the demand had a very slight decrease in general from that same dates.

For the next few days it is expected that temperatures will drop, but in general it will not have much impact on the demand at European level, maintaining the stability in the first half of March. For the second half of March, temperatures will gradually rise and demand will continue with the seasonal decline.

At the end of last week, on March 8, futures prices for April 2019 in most European markets had decreased compared to the beginning of this week, March 4. The price drops range between 0.57 €/MWh for Italy in the EEX market and 1.90 €/MWh for Portugal in the OMIP market. However, the futures of the Nordic countries for the next month rose during the previous week, both in the ICE market, with an increase of 0.20 €/MWh, and in the Nasdaq market, where they increased 0.25 €/MWh.

For the next week in AleaSoft it is foreseen that the wind energy production will decrease in general at European level, with the possible exception of the Italian peninsula. 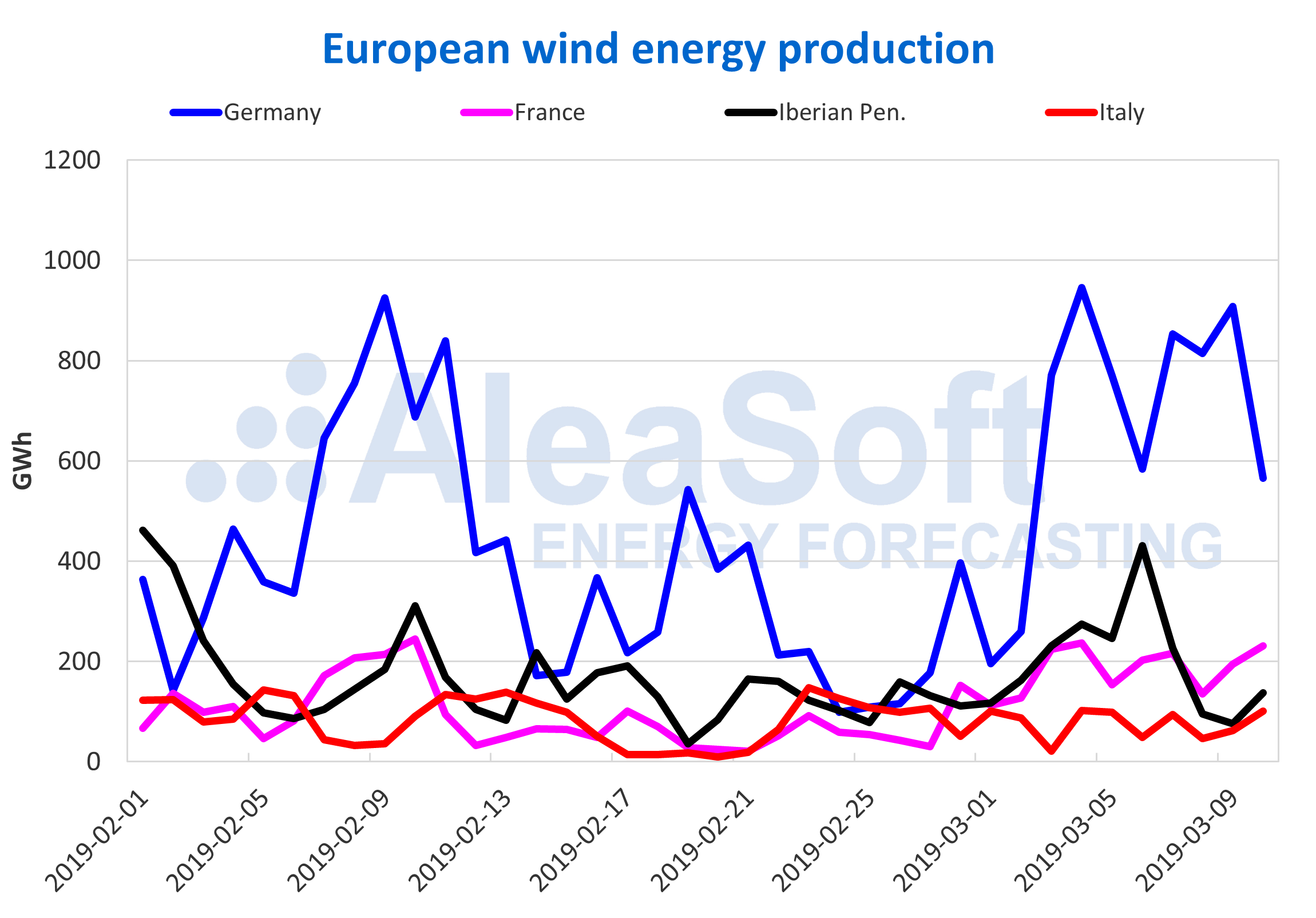 Solar energy production, which includes both photovoltaic and solar thermal technologies, dropped in the last week around 25% in the case of Germany and Spain and around 7% in the case of Italy. For the next week, it is expected that the trend will reverse and that production values will approach the levels of the end of February. 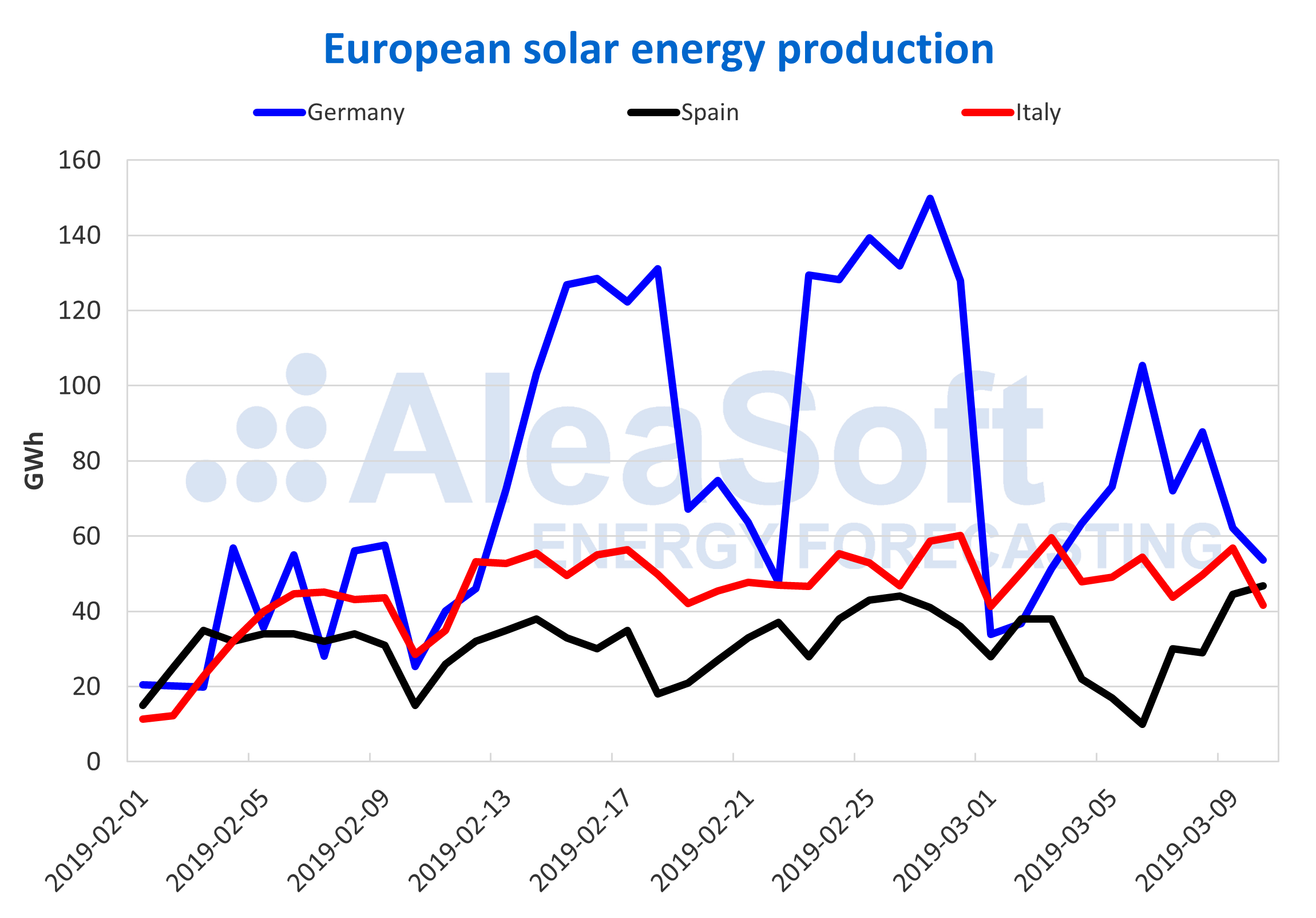