AleaSoft, March 7, 2019. This week of March 4, there were several low price records in the MIBEL electricity market, according to the analysis carried out by AleaSoft. According to the consultancy, higher wind energy production and lower electricity demand are the main causes of this decline.

In the Iberian electricity market MIBEL this was a week of low price records, according to the analysis carried out by AleaSoft. The hour 4 of last March 4 is the lowest hourly price of the Spanish electricity market so far this year, with 4.52 €/MWh. The hours 3, 5, 2 and 6 of that same day occupy the second to fifth positions, respectively, in the ranking of the hours of lowest price to date. In the Portuguese market, hour 5 of March 4 is the third with the lowest price so far this year, with 18.91 €/MWh. Looking the daily average prices, the price of Portugal on March 6, 37.85 €/MWh, is the lowest of the year, and the average price of Spain for the same day, 37.82 €/MWh, is the second lowest to date. In the Spanish market, the average price of the first four days of this week, from March 4 to 7, was 45.50 €/MWh, which represents a decrease of 15% compared to the first four days of the last week, and in the case of Portugal, the average price of the days of this week was 46.37 €/MWh, with a decrease of 14% compared to the corresponding period of the previous week.

The increase in wind energy production, together with a decrease in electricity demand in the Iberian Peninsula, due to higher temperatures this week, are the main causes of this decrease in prices, according to AleaSoft. In addition, the current stability with a downward trend in the prices of the main fuels for generation, mainly of gas and coal, also favour the reduction of electricity market prices.

During this week, between March 4 and 7, the average price of most European electricity markets decreased compared to the average of the first four days of the previous week, on February 25. The decreases are in a range between -0.6% of the EPEX SPOT market in Netherlands and -37% of the EPEX SPOT market in Germany. The only market whose average price increased in the first four days of this week compared to the same period of the previous week is the Nord Pool of the Nordic countries by 5.1%. 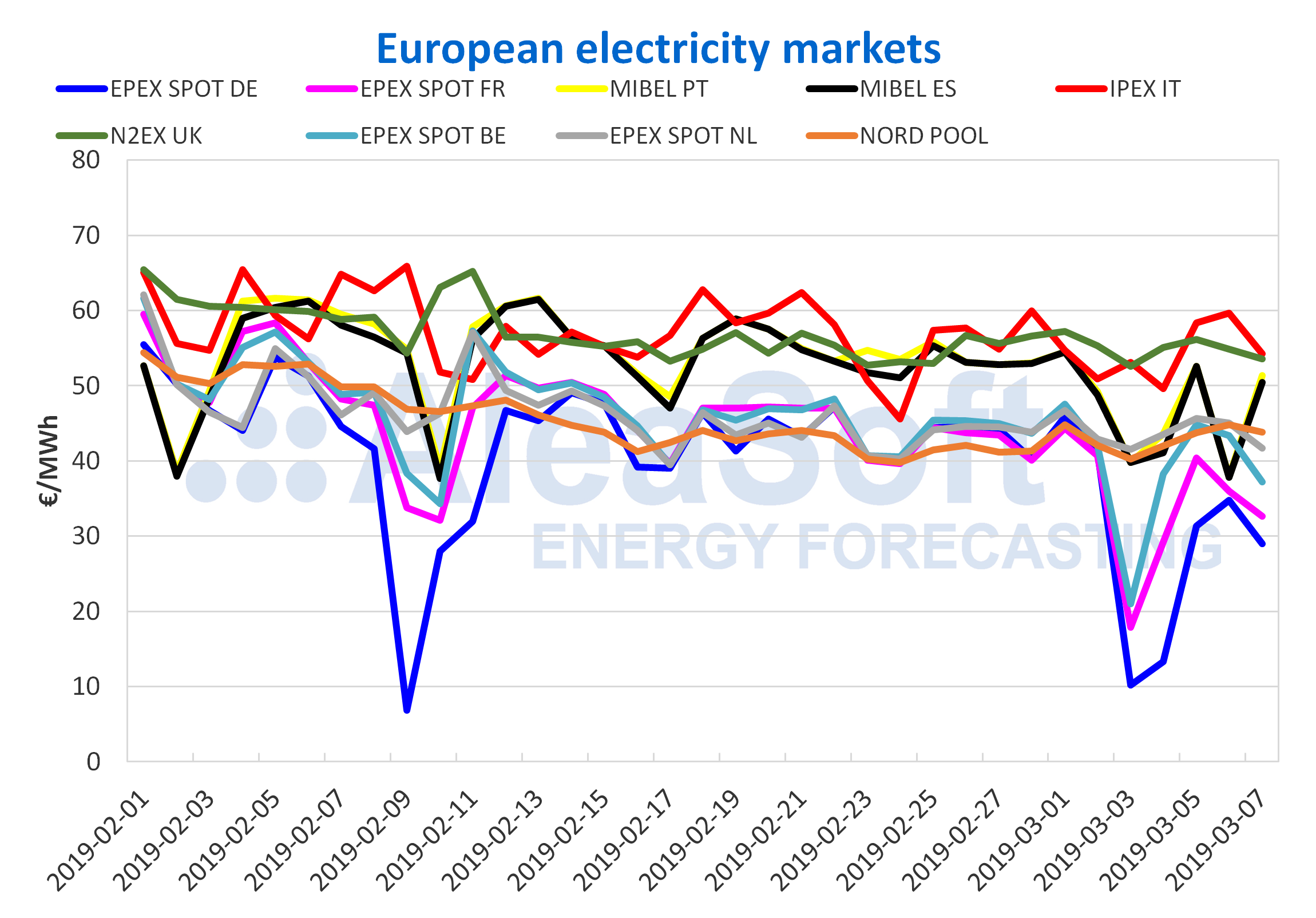 According to the analysis carried out by AleaSoft, the increase in wind energy production is the fundamental cause of this drop in prices. When comparing the production with this technology in Europe during the first three days of this week, from March 4, compared to the first three days of the previous week, in Germany it has increased 472%, in France 363% and in the Iberian Peninsula 153%. In some countries, such as Spain, Portugal, Italy, Belgium and the Netherlands, the lower electricity demand was another factor that has favoured the decline in prices. 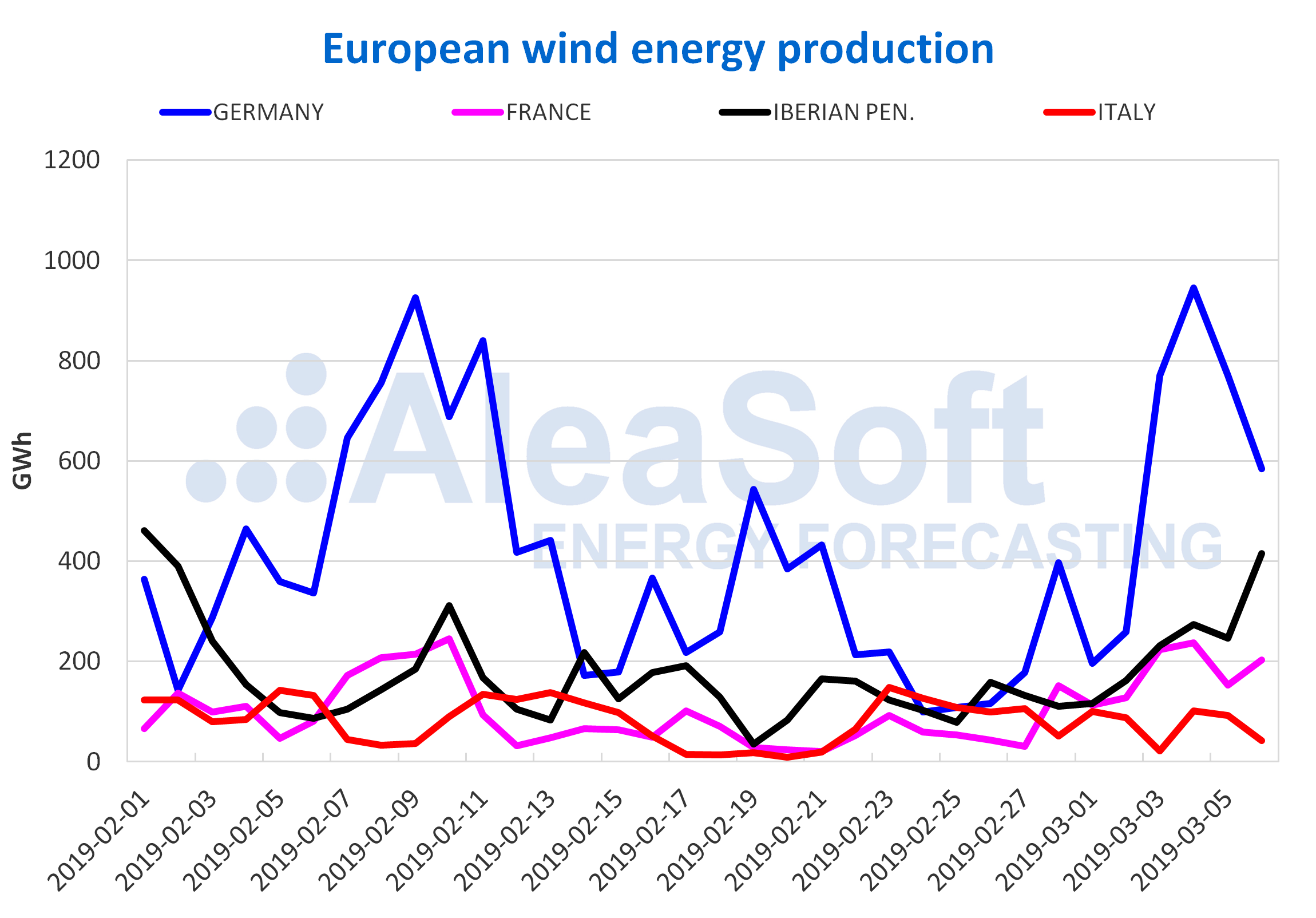 The Brent oil futures price for May this year in the ICE market has remained this week of March 4 around the equilibrium point of 65 $/bbl that AleaSoft commented at the beginning of the week. In yesterday’s session, March 6 it settled at 65.99 $/bbl.

The futures of the TTF gas in the ICE market for next month remained stable this week with a slight downward trend, settling yesterday, March 6, at 16.85 €/MWh.

The API 2 coal for April 2019 in the ICE futures market started the week maintaining the stability around the 75 $/t that it experienced since last week. In yesterday’s session, March 6, it dropped to 72.90 $/t, almost 2 $/t lower than in the previous session.

The CO2 emission rights futures for the reference month of December 2019 in the EEX market were this week around what is considered in AleaSoft the current equilibrium point of 22 €/t. In the session of yesterday, March 6, they settled at 22.13 €/t.

Electricity futures in Spain and Portugal for April this year in the OMIP market started the week of March 4 at 49.50 €/MWh, a value similar to those at the end of last week when the price rose. However, over the course of the week it started to fall and yesterday, March 6, Spain settled at 48.50 €/MWh and Portugal at 48.20 €/MWh. Something similar happened with the futures of Spain for the same product in the EEX futures market, whose settlement price on March 4 was 49.47 €/MWh and that of yesterday, March 6, 48.85 €/MWh.

Solar energy production, which includes photovoltaic and solar thermal, between March 4 and March 6 has decreased by 62% compared to the corresponding period of the previous week. For the next week in AleaSoft it is expected that solar energy production will rise again with the increase in sunshine hours.

This week of March 4 all the nuclear power plants have been operating normally and daily hydroelectric production has been around 60 GWh. 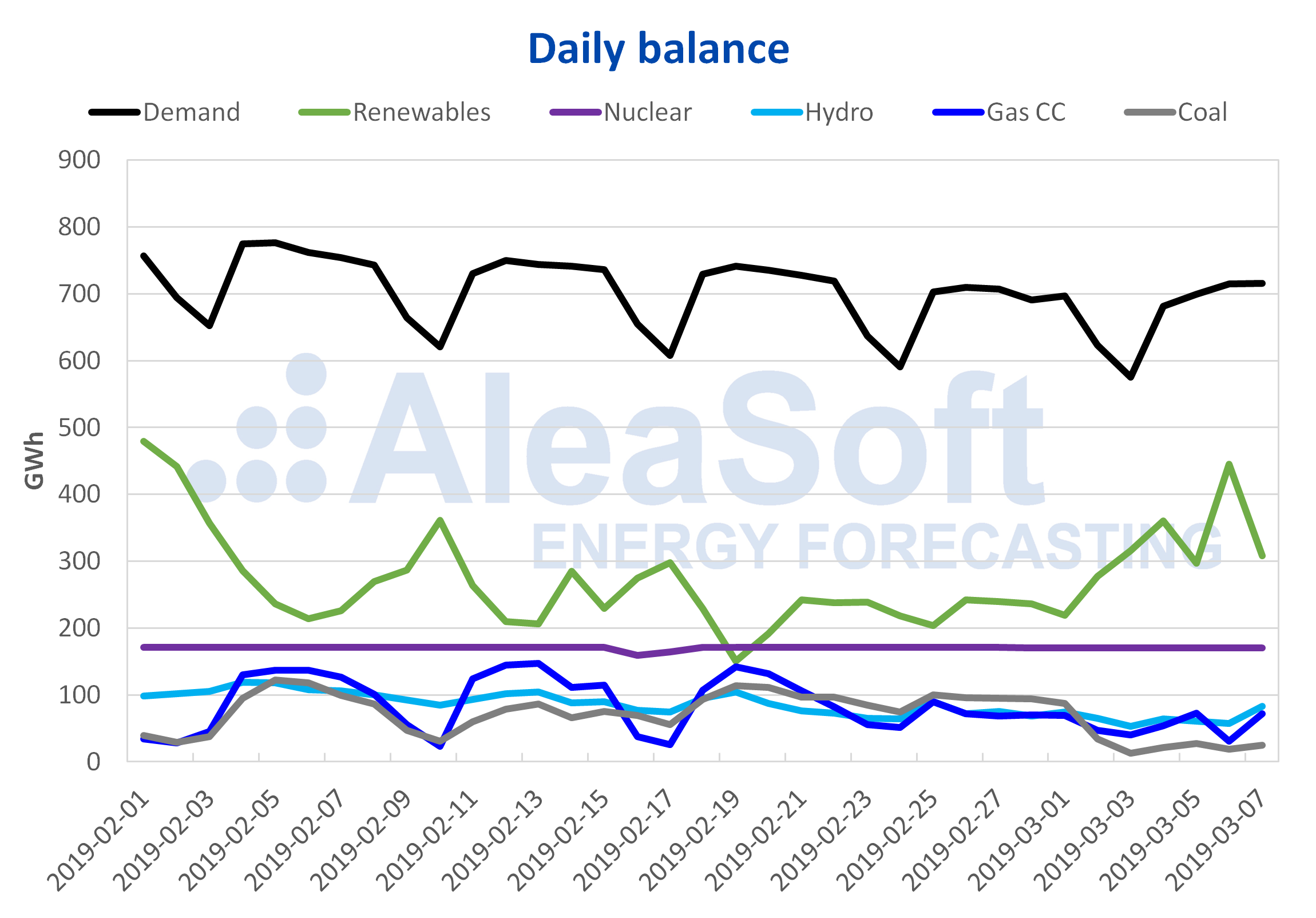 According to the latest Hydrological Bulletin, published by the Ministry for the Ecological Transition, hydroelectric reserves have decreased by 88 GWh this week, after five consecutive weeks of growth. Currently they are 11 036 GWh, which represents 47.4% of the total capacity.