Analysing the price of Brent oil futures in the ICE market for April, in mid-February there was an increase up to 66.25 $/bbl settled on February 15. Such a high value was not reached since November 19, 2018 when April futures were traded at 67.4 $/bbl. The minimum value in these months was reached on December 24 with 51.02 $/bbl. Since January 9, the price remained stable around 62 $/bbl.

This upward trend has several causes. In the analysis of previous weeks by AleaSoft, the instability in Venezuela with a low production was mentioned, which is something that has no solution in the short term. On the other hand, Saudi Arabia and Russia reduced the production by more than 80 thousand barrels per day each. OPEC production decreased to the minimum of the last four years. For its part, China continues with the increase in demand for crude oil.

In contrast, the US production continues to rise and, with the global slowdown, these are factors that produce an equilibrium so that the price does not continue to rise. We have to wait a few weeks to see in which band the price is balanced, but AleaSoft considers that this balance should be around 60 $/bbl in the mid-term.

TTF gas futures for March have stabilized at 18 €/MWh since February 11, after a continued decline from the peak of 24 €/MWh maintained during the second half of December.

The API 2 coal futures for March halted the downward trend with a minimum below 72 $/t at the beginning of the week of February 11 and rose to 74 $/t on Friday, February 15.

In the case of the gas and coal price, we consider that the rise of Brent slowed the fall that had taken place in recent weeks. With the arrival of spring, with higher temperatures and lower demands, AleaSoft considers that we will have an equilibrium point around 18 €/MWh in the case of TTF gas and of 70 $/t in the case of API 2 coal.

The price of CO2 emission rights futures for the month of December 2019 came down from 20 €/t at the end of the week of February 11, after it was published that the UK will not issue or auction EUA permits soon. However, the rise in gas and coal prices means that the prices of CO2 emissions return to values above 20 €/t. At AleaSoft, we consider that this price of 20 €/t can be maintained in the coming weeks.

When the evolution of European prices is analysed from the last week of January, there is a slight drop that continues until mid-February and will continue until the end of this month. Among the causes of this decline can be noted the rise in temperatures, that caused a slight decrease in demand with a downward trend that will continue until the end of February. As we have mentioned on other occasions during the last weeks in AleaSoft, the continuous decrease in the prices of gas, coal and CO2 influenced this decline as well.

In the prices evolution of the last week there are two groups of parallel markets. A more expensive group consisting of N2EX UK, IPEX Italy PUN and MIBEL (Spain and Portugal) that has moved above 55 €/MWh, and on the other hand, we have EPEX SPOT (Germany and France) and Nord Pool of the Nordic countries, that have moved below 45 €/MWh. A difference of about 10 €/MWh has been created.

From the analysis of the previous tables, showing the registered data of prices, demands and temperatures of the last two weeks in Europe, it can be seen that the biggest difference has been in the price of Germany that has gone up more than 10%, caused mainly by a decrease in wind energy production. The rest of the European markets have remained relatively stable during these two weeks, although, as we pointed out previously, there is a slight downward trend in prices that should be maintained until the end of February.

Last week of February 11, European electricity futures continued the downward trend that they have been experiencing since the end of last year, as analysed by AleaSoft.

The Italian futures in EEX for March, which two weeks ago, in the week of February 4, were trading around 57 €/MWh, were traded on Friday, February 15 at 53.82 €/MWh, between 3 and 4 €/MWh lower. Also in the Italian market MTE of GME this decreasing trend is also being seen; last week the futures were traded around 54 €/MWh, when, just a week earlier, they were traded around 59 €/MWh.

In France there were also reductions in wind energy production last week of 623 GWh and a slight decrease of 2% is expected for the coming week of February 18. In the analysis carried out by AleaSoft regarding solar energy production, which includes both photovoltaic and solar thermal, an increase of 325 GWh is observed in Germany, comparing the weeks of February 4 with the following week. For the coming week, an increase of 4% is expected.

Italy also has an upward trend. In the two previous weeks the increase was of 26% and in the coming week a very similar production is expected.

In the case of Spain in the last two weeks there was a decrease in solar energy production of 7% and for the coming week an increase of 8% is expected.

As we stated the previous week, with the increase in sunshine hours, solar energy production will increase progressively. 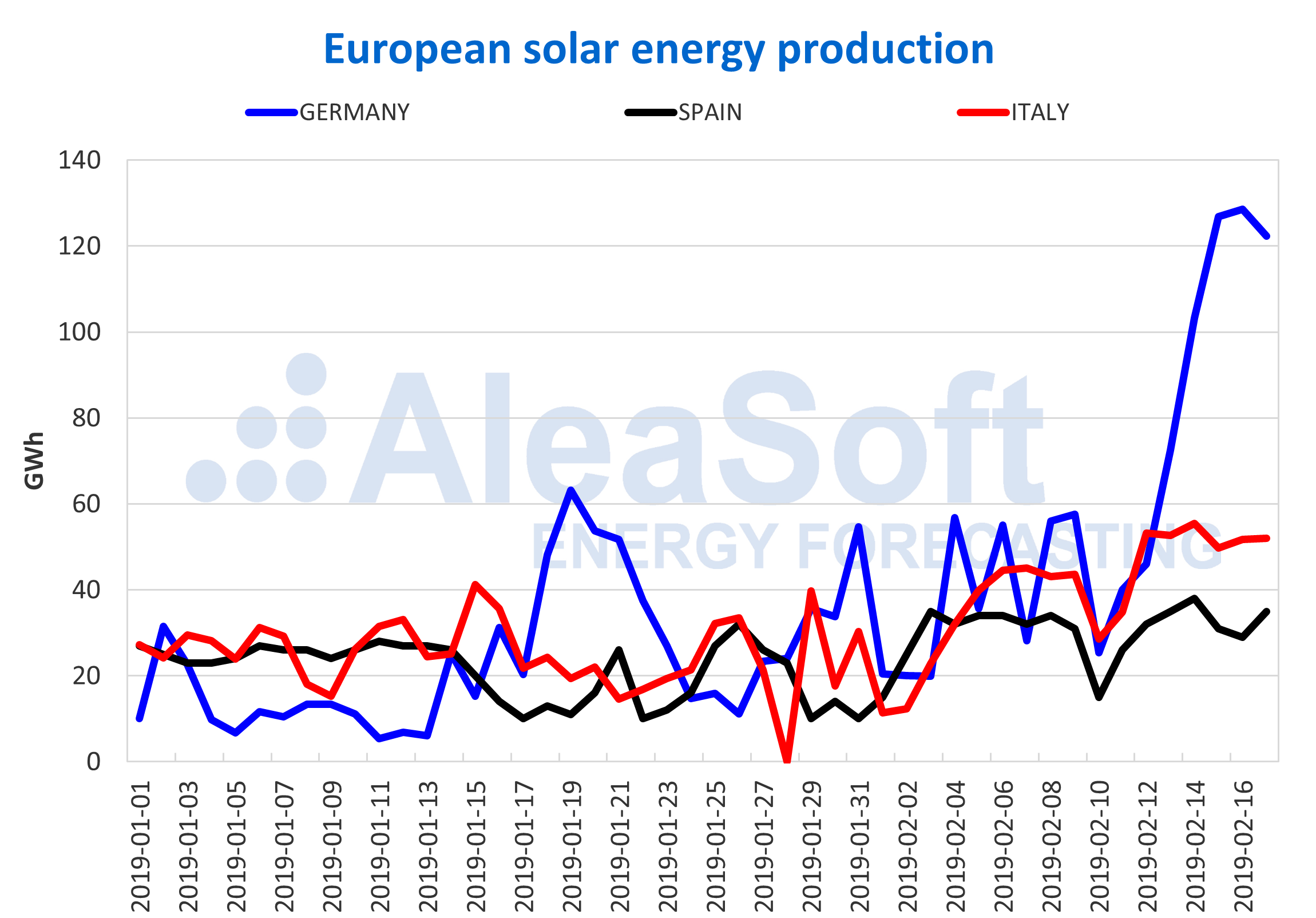 PrevAnteriorThe MIBEL electricity market price falls this week but it is the highest in Europe
SiguienteSelf-consumption: Cornerstone of the photovoltaic revolutionNext
Menu
Facebook-f Twitter Linkedin Instagram