AleaSoft, February 14, 2019. This week the MIBEL market average price, although it is lower than last week, is the highest in Europe, both on the average between February 11 and 14, and on days February 12 and 13. According to AleaSoft, while in other European countries the renewable energy production in general was higher, a lower wind energy production in Spain this week is the fundamental reason why the MIBEL market is the most expensive in Europe. 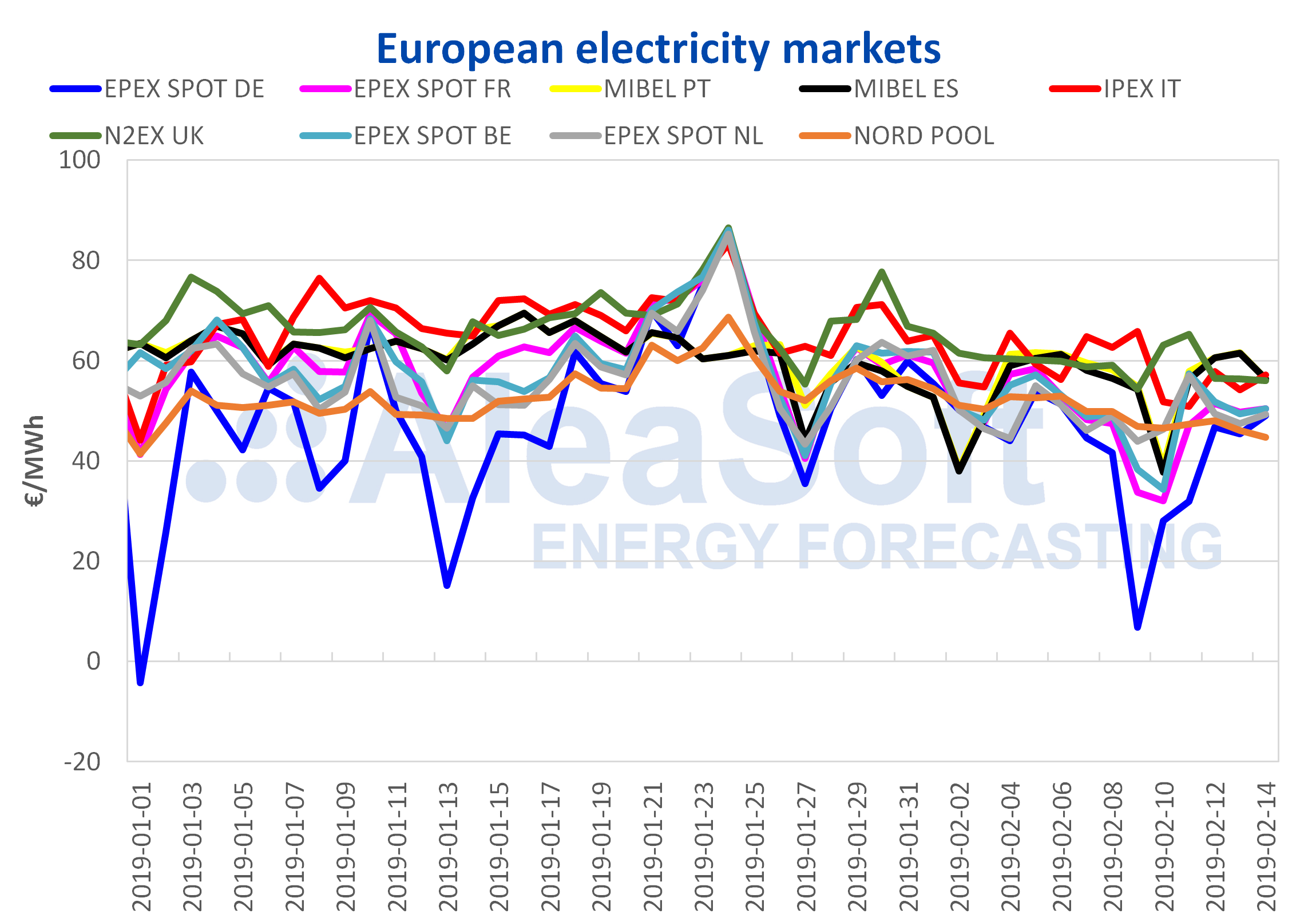 According to AleaSoft´s analysis, the current scenario with lower electricity demand due to higher temperatures than the usual for this time of year, with no nuclear stops, the hydroelectric production around 100 GWh per day and the fuels price following a downward trend, helped the electricity market prices to fall. However, this week renewable energy production in Spain, mainly wind energy production, was lower than last week, unlike in other countries such as Germany, where wind and solar energy production were higher this week, a 43.7% and 7.5% more than last week respectively, which has led the MIBEL market to have the highest price in Europe. 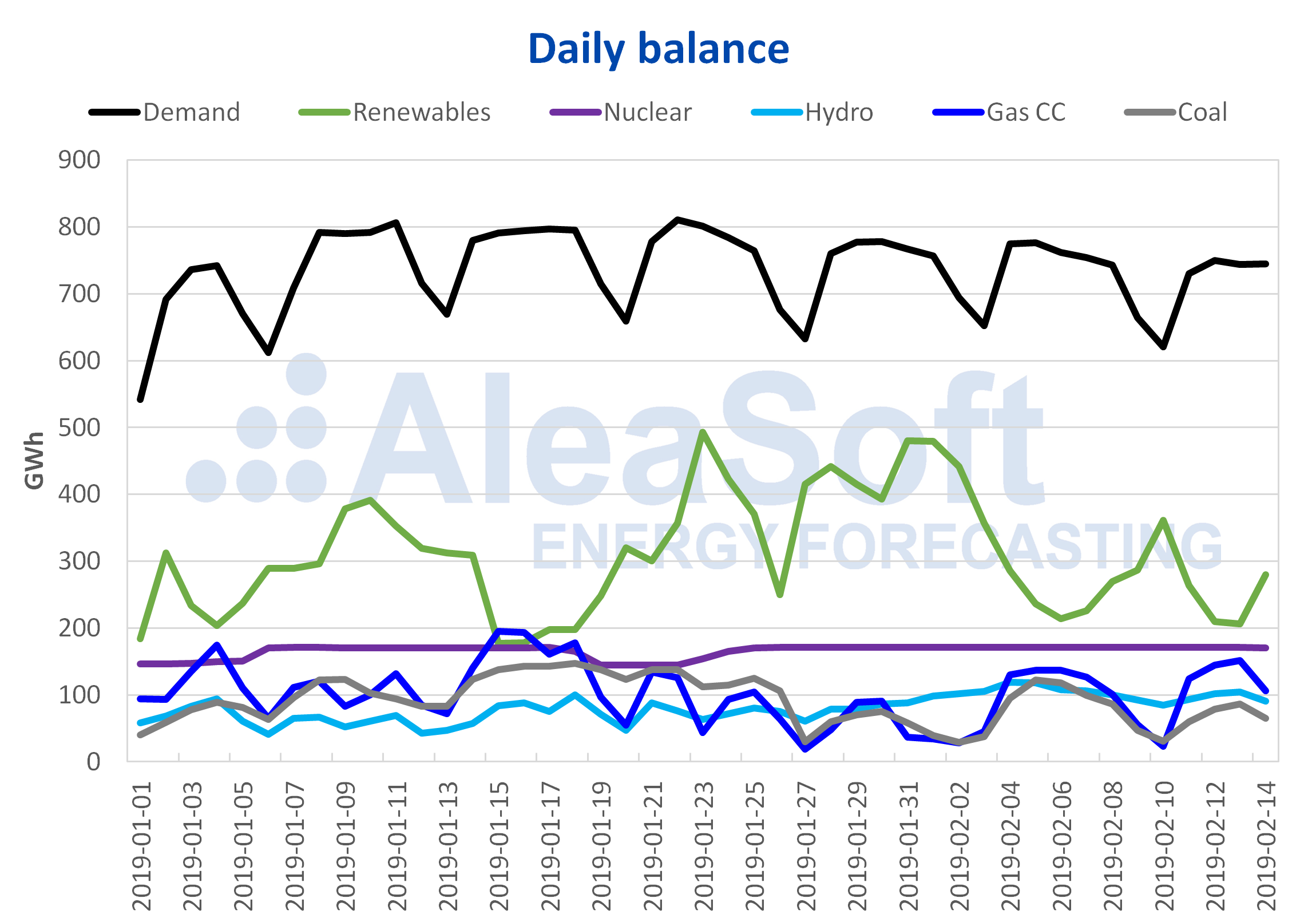 So far this week, in the upper part of Europe´s electricity prices, above 55 €/MWh and following the MIBEL market, are the N2EX market of Great Britain and the Italian IPEX market. The German EPEX SPOT market is again on these four days, from February 11 to 14, the one with the lowest average price in Europe, with 43.29 €/MWh, followed by the Nord Pool market of the Nordic countries, with 46.54 €/MWh.

In the European electricity futures markets, the trend is bearish, in line with the bearish climate that the fuels prices maintained. This week of February 11 the futures price of Spain and Portugal in the OMIP market for March 2019 has been around 50 and 51 €/MWh, between 1 and 1.5 €/MWh lower than last week. At the beginning of September 2018, the price of these products was higher than 63 €/MWh. On the other hand, in the EEX market, the Spanish futures for March 2019 settled yesterday, February 13, at 51.08 €/MWh, 1.31 €/MWh lower than in February 6 session. The futures of France and Germany for March 2019 in the EEX market have been traded this week between 3 and 4 €/MWh lower than last week. The settlement price of yesterday February 13 session was 44.80 €/MWh for France and 41.88 €/MWh for Germany.

Brent oil futures in the ICE market for April 2019, which had been traded during the first two days of this week between 61 and 62 $/bbl, settled at 63.61 $/bbl on yesterday February 13 session, a value that had not been reached since the end of November last year. Signs of a tighter supply due to production cuts by OPEC countries and their allies, including Russia, sanctions on Iran and the political crisis in Venezuela are being considered as the causes of this increase yesterday. In today´s session on February 14, the price reached values above 64 $/bbl.

The price of TTF gas futures continues the bearish trend that has been experiencing since early September last year. This week the futures for March in the ICE market were traded below 18 €/MWh on February 12, at 17.79 €/MWh. In yesterday´s session of February 13, they settled at 18.02 €/MWh.

The price of the API 2 coal futures in the ICE market for March was around 71.50 $/t on the first days of this week, following the downward path it has been experiencing, although in the session of yesterday February 13 closed at 73.30 $/t.

The price of CO2 emissions rights futures for the reference month December 2019 in the EEX market, started the week above 22 €/t and fell below 21 €/t, closing the February 13 session at 20.95 €/t, after the United Kingdom informed that it will not issue or auction EUA permits soon.

This week, temperatures have been slightly higher than last week and above the usual values for this time of year, which has led to lower electricity demand. According to AleaSoft, at the end of this week of February 11, electricity demand will have dropped 1.8% compared to last week.

According to the latest hydrological bulletin published by the Ministry for Ecological Transition, hydroelectric reserves have continued to increase during the last week to 10 927 GWh, which represents 46.9% of total capacity. Since the end of January, there have already been 3 consecutive weeks of increased reserves, after they fell for 4 consecutive weeks since the end of December.