MIBEL: The only European electrictiy market where prices are decreasing this week

AleaSoft, May 9, 2019. So far this week, in the MIBEL electricity market the prices decreased compared to the first four days of last week, placing it in the group of European markets with lower prices, meanwhile, in the rest of the markets of the continent, the prices rose in the same period. According to AleaSoft, the increase in wind energy production is the main cause of the drop in MIBEL prices.

In the first four days of this week of May 6, the price of the MIBEL electricity market decreased by 11% compared to the first four days of last week. In fact, MIBEL is the only European electricity market in which prices have fallen this week. The average price from May 6 to 9 was 47.38 €/MWh for Spain and 47.71 €/MWh for Portugal. Despite the fact that on Monday, May 6, the MIBEL market had once again the highest daily average price among the main European markets, with 53.05 €/MWh, the following three days it was placed in the group of European markets with lower prices. According to AleaSoft, Iberian wind energy production, which increased by 37% compared to last week, is the cause of the decrease in electricity prices in the Iberian Peninsula so far this week.

However, the most striking fact of this week in the Spanish electricity system occurred on Tuesday night in the adjustment markets, when the outage of a thermal power plant and a poor forecast of demand and wind energy production, caused the upward secondary reserve energy price reach 11,498.85 €/MWh at the 21st hour. This fact reinforces the importance of having reliable forecasts in the energy sector.

As previously anticipated, in the rest of Europe the prices of electricity markets increased so far this week, between the 1.1% of the N2EX market in Great Britain and the 24% of the Nord Pool market of the Nordic countries, when compared with the first four days of last week. The main cause of this raise, is the increase in electricity demand after the holiday on May 1 last week, in addition to the temperatures that fell this week in most of the continent. Also the price of CO2, which this week returned to be above 26 €/t, is another cause of the increase in prices in electricity markets in Europe. 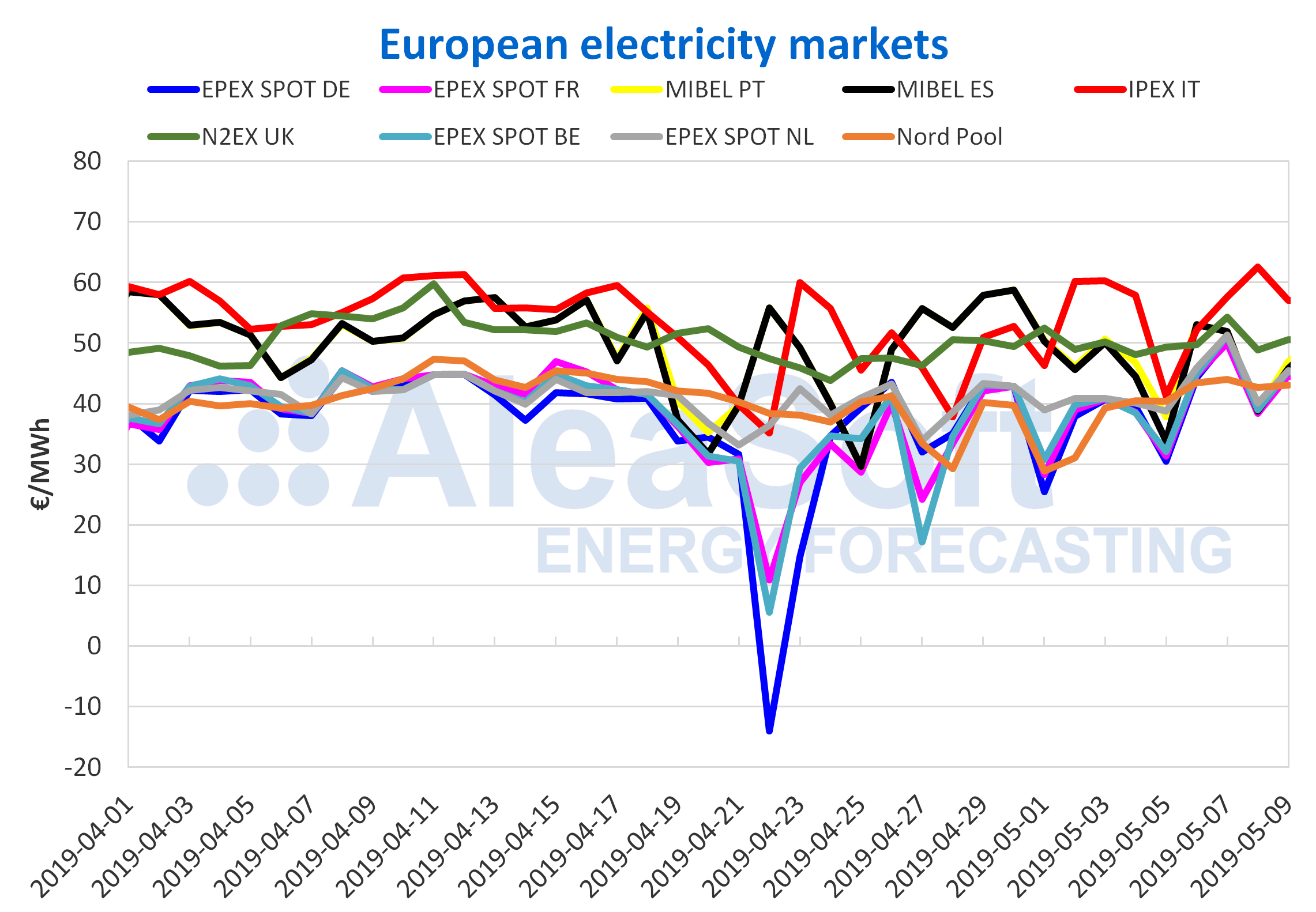 The price of Brent oil futures for the month of July in the ICE market was placed on Wednesday May 8 at 70.37 $/bbl, after the previous Tuesday fell to 69.88 $/bbl, its lowest value in five weeks. This market continues to be marked by the growing tensions between the United States and Iran, the political instability in Venezuela and the OPEC cuts. To these factors is also added the commercial dispute between the United States and China.

Futures of TTF gas for June in the ICE market remain stable with values slightly above 14 €/MWh. Yesterday, May 8, they settled at 14.32 €/MWh.

The prices of CO2 emission rights futures in the EEX market for the reference contract of December 2019 returned to the upward trend since the beginning of May, settling this Wednesday, May 8, at 26.92 €/t, 6.8% more than on Friday, May 3.

This week, the electricity futures are following an upward trend, in parallel with the behaviour of the CO2 futures.

The futures of Spain in the OMIP and EEX markets, as well as those of Portugal in the OMIP market, for the third quarter of 2019 and for the year 2020, were trading this week around 56 €/MWh, with increases of up to 1.4% compared to the session on Friday, May 3.

The growth of futures in France and Germany for the next quarter and year in the EEX market compared to the May 3 session is somewhat higher, up by 3.6%. In yesterday’s session May 8, France’s futures for the third quarter settled at 45.49 €/MWh and those of the year 2020 at 52.96 €/MWh. In the case of Germany, the settlement price on May 8 was 44.50 €/MWh and 49.63 €/MWh for the next quarter and year respectively.

Electricity demand in mainland Spain raised by 9.1% in the first three days of this week, from May 6 to 8, compared to the first three days of last week. This is due to the effect of the national holiday on May 1. According to the calculations made by AleaSoft, once the effect of the holiday was corrected, the growth was 1.7%. It is expected that in the remainder of this week the average temperature of mainland Spain will rise up to three degrees, so that the electricity demand will increase.

As for the solar energy production, which includes photovoltaic and solar thermal, it fell by 26% so far this week, compared to the average production of last week. However, production with this technology is expected to increase next week.

The Ascó II nuclear power plant continues at a scheduled stop for refuelling since April 27, and is expected to resume operations on May 31.

During the first three days of this week, the hydroelectric energy production was 14% below the values of the previous week. 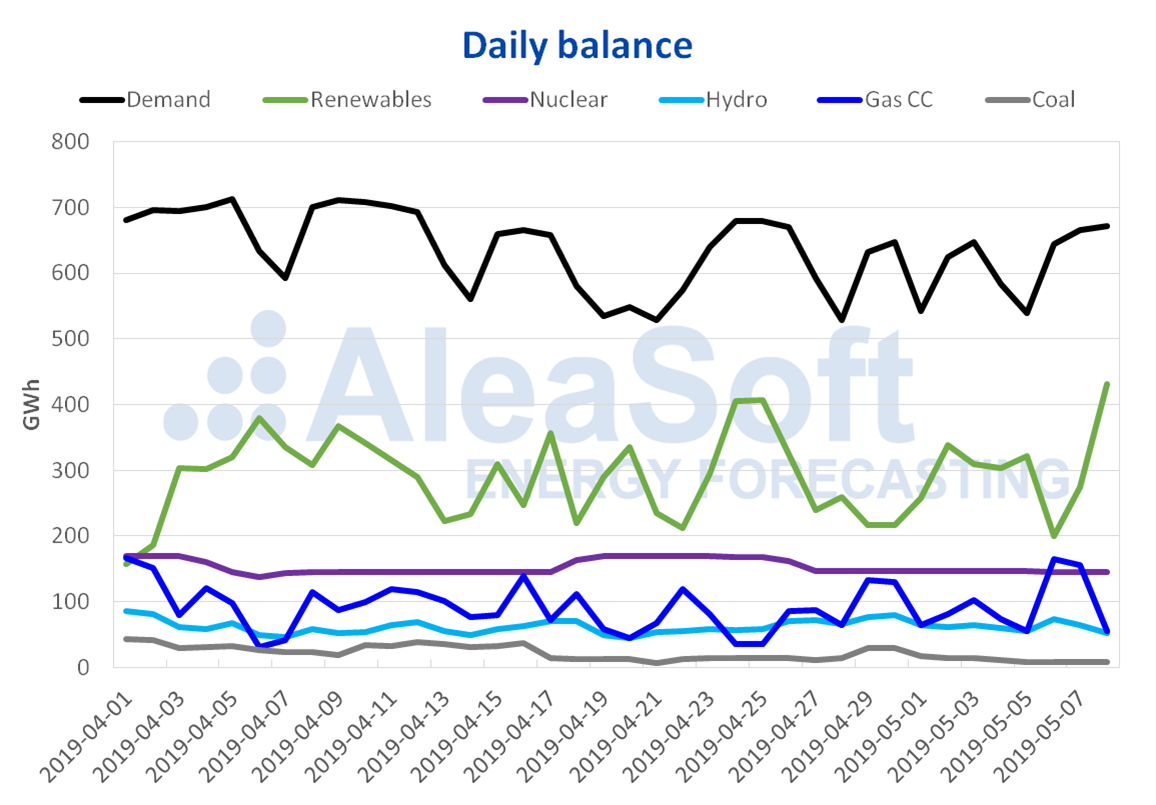 The growing trend of hydroelectric reserves continued last week, this time they increased 374 GWh compared to the previous week. Currently they are 12 223 GWh, which represents 53% of the total capacity, according to the information published in the Hydrological Bulletin of the Ministry for Ecological Transition.