AleaSoft, May 6, 2019. AleaSoft analyses prices in the fuels markets, CO2 emission rights and European electricity markets, in addition to production with renewable energies at the end of April and the first days of May. The increase in the price of CO2 caused last April to have higher prices compared to March this year and April last year in the main European electricity markets, except in the N2EX market of Great Britain which had a year-on-year decrease and compared to March.

The prices of Brent oil futures for July 2019 in the ICE market continued with a slight decrease, settling on Friday 3 at 70.85 $/bbl. April started at 68.59 $/bbl and from that moment all values for the month were higher; as of April 7, the 70 $/bbl barrier was broken and the level has not been lower yet, although it has been close. The maximum value of April occurred on the 23rd, reaching 73.89 $/bbl; since then the values have been decreasing. April closed with a price of Brent in the ICE futures market of 72.06 $/bbl and in the first days of May, until the settlement of Friday 3, dropped 1.33 $/bbl in two days, a 1.8%. This Monday started with a 2% drop in the price of Brent following the statements of US President Donald Trump on a possible increase in tariffs on imports from China, but the price has been slowly recovering. The value of 70.75 $/bbl seems to be a short-term support. 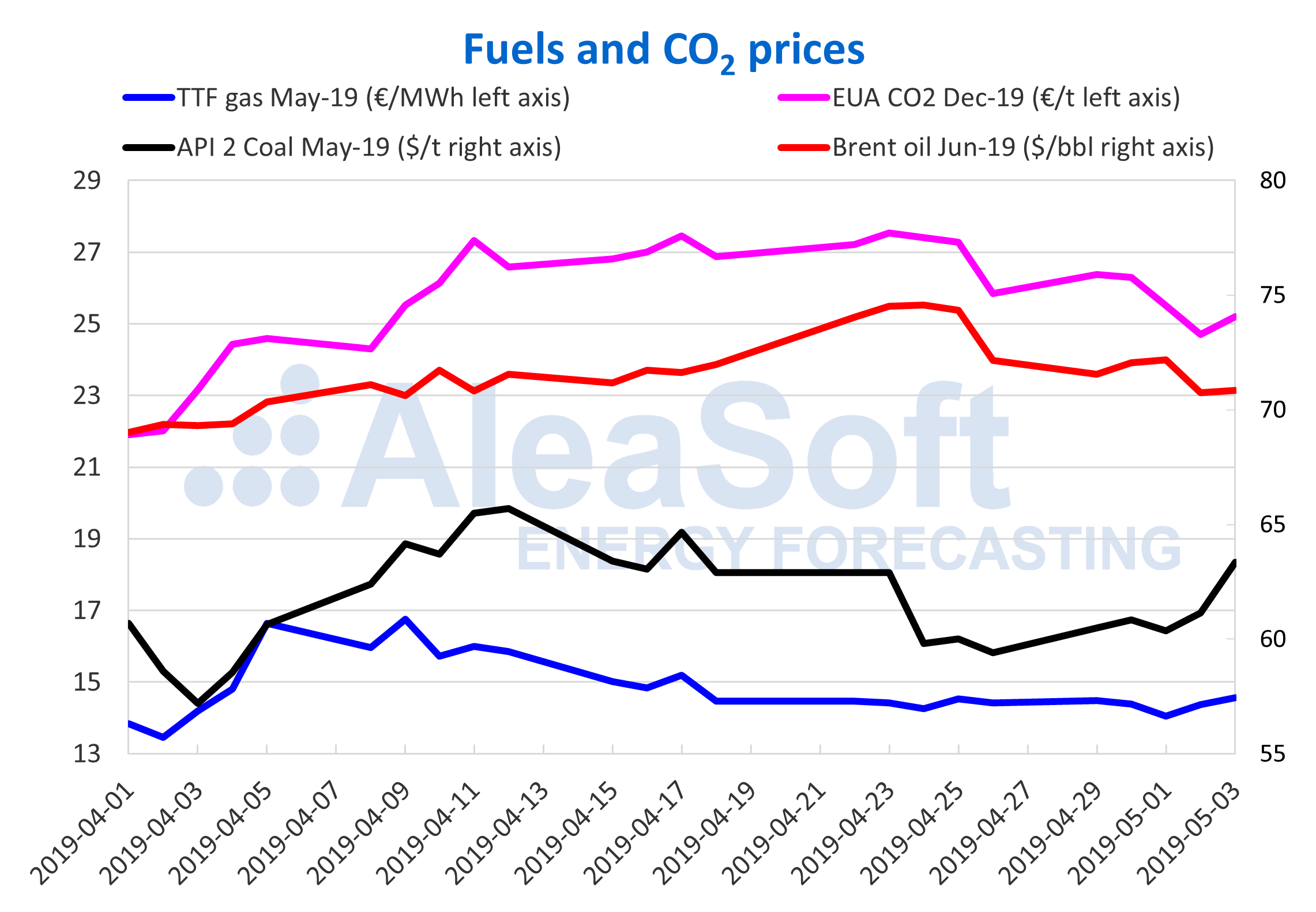 In the transition week between April and May, prices in Europe had an average value of around 43.57 €/MWh, representing a weekly general increase of 13%, mainly due to the drop in wind energy production of 27%, compared to the previous week.

In the group of markets with the highest prices in the last week, the N2EX market of Great Britain, the Italian IPEX market and the MIBEL market of Spain and Portugal continue to be present. They had average prices of 50 €/MWh in the week. In the case of Spain, variations in wind energy production caused large differences in price, from 58.78 €/MWh on April 30 to 33.87 €/MWh on May 5, a drop of 25 €/MWh.

In the group with the lowest market prices of the week are the Nord Pool and the rest of the EPEX SPOT markets of Belgium, the Netherlands, France and Germany with an average price over the last week close to 40 €/MWh. This group of markets had a similar behaviour since the beginning of May.

Doing a monthly analysis, April closed with an average price in the main European markets of 44.39 €/MWh, with an increase of 4.4% with respect to March and 7.6% with respect to April of last year. The main cause of this increase was the price of CO2 that hit a historic ceiling on April 23 with a value of 27.54 €/t.

European electricity futures for the third quarter of 2019 fell last Friday between 0.6% and 4.0% in most markets compared to Friday of the previous week. The exception was the Nordic ICE and NASDAQ markets, which increased by 0.3% and 0.7%, respectively, while the MTE market operated by GME remained unchanged.

In the case of the European electricity futures for 2020, a generalised weekly decline is observed in all markets on Friday, May 3. Except the MTE market operated by GME that, as for the third quarter, remained unchanged.

In general, during the month of April the electricity futures for the month of June showed a rise until the days close to April 10. As of that moment, a clear downward trend is noticeable in most European markets.

In the week with the last days of April and first days of May, wind energy production had a fairly widespread decline in European markets. In Germany the drop was 22%, in France 45%, in the Iberian Peninsula it was 28% and in Italy, 14%. For the current week, an increase of the wind energy production in France and Italy of the order of 40% is foreseen. In the rest of markets, the expected rises are much lower.

Looking at the global level for the month of April, in Germany and France, wind energy production fell by just under 45% with respect to March, while in Italy the decline was 38%. If we compare it with April of last year, in France there was an increase of 10%, in the Iberian Peninsula, of 6% and in Italy the highest year-on-year increase occurred with 21%. 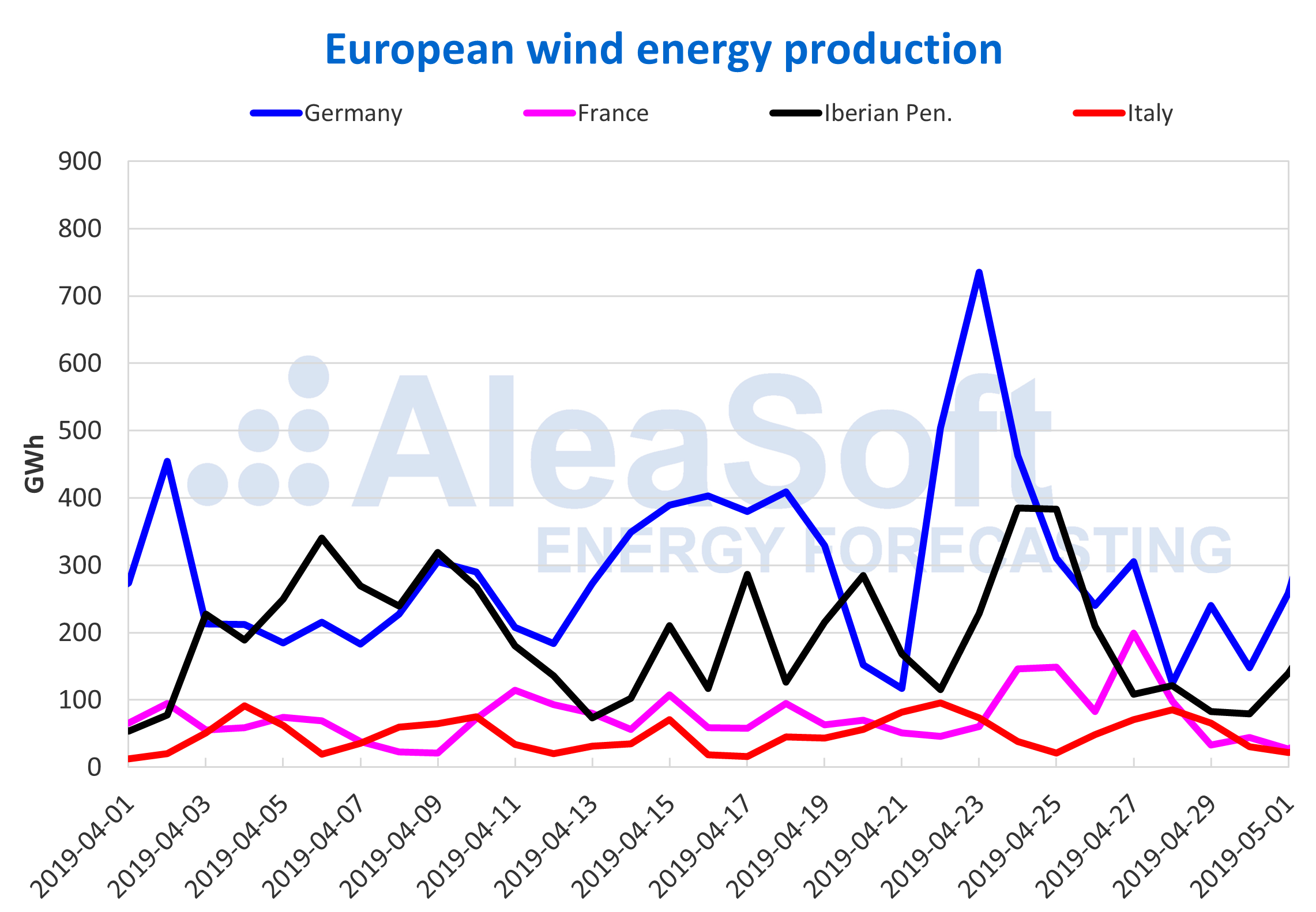 Analysing the last week of April and the first days of May, solar energy production, which includes both photovoltaic and solar thermal technology, fell by 13% in Germany, while in Spain it increased by 58% compared to the previous week. In Italy, the increase was 6%. For the current week, while for Germany and Italy the forecasts point to a slight growth, for Spain a decrease in solar energy production of just over 20% is foreseen. 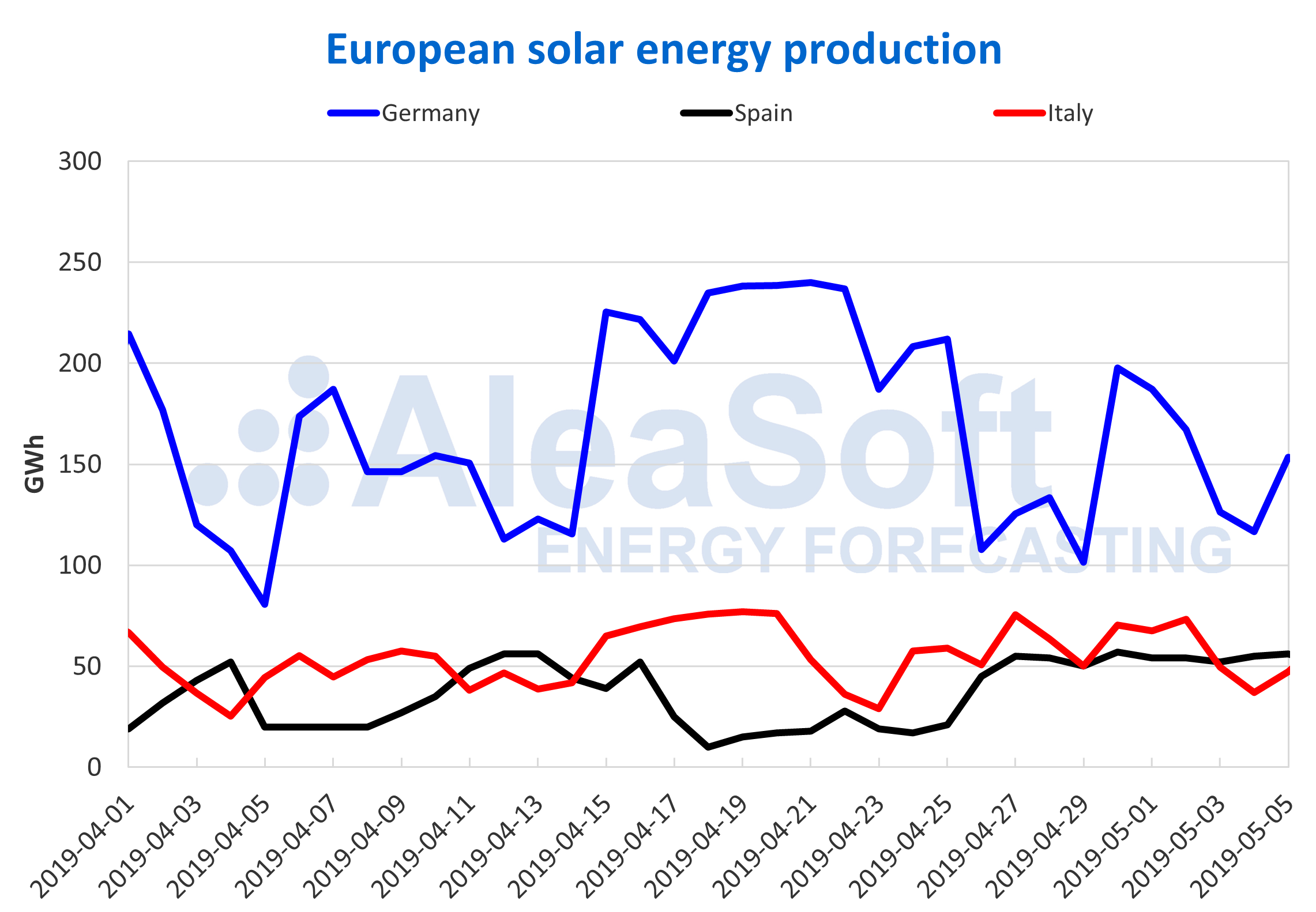 PrevAnteriorApril: a month of contrasts in the MIBEL electricity market
SiguienteMIBEL: The only European electrictiy market where prices are decreasing this weekNext
Menu
Facebook-f Twitter Linkedin Instagram