AleaSoft, July 4, 2018. MIBEL, the Spanish wholesale electricity market, closes the second quarter of 2018 with the record price among the second quarters of the last ten years. AleaSoft considers that the main causes lie in the continuous increase in gas and coal prices, together with the price of CO2 emissions rights, that have kept growing over the past twelve months.

In recent weeks, several news about record prices in the Spanish wholesale electricity market MIBEL have appeared. A few weeks ago, AleaSoft published that the second most expensive month of May in the history of the MIBEL market and the most expensive one in the last decade was registered, with an average price of 54.92 €/MWh. And, a few days ago, AleaSoft also announced that the same record was repeated in the month of June 2018: the second most expensive in the history of the market and the record in the last decade, with an average price of 58.46 €/MWh.

The production data analysed by AleaSoft in the Spanish electricity system in the second quarter of 2018, with respect to the same quarter of 2017, suggests that the price should have been lower this year. The electricity demand was slightly lower (‑0.7%) and, although wind energy production was lower (‑5.0%), also solar (‑15.9%), the whole renewable production was significantly higher (+24.6%) since the hydroelectric production increased (+115.1%) due to the end of the drought and the increase of the water reserves. All this led to a decrease in the thermal gap compared to the second quarter of 2017, which led to a decrease in production with gas and coal, ‑10.6% and ‑39.2%, respectively. The only production data that could point in the direction of a price increase would be the nuclear production, which in this second quarter was 14.7% lower than the same quarter last year, due to the accumulation of scheduled and unscheduled shutdowns that led to up to three plants stopped at some times this quarter. 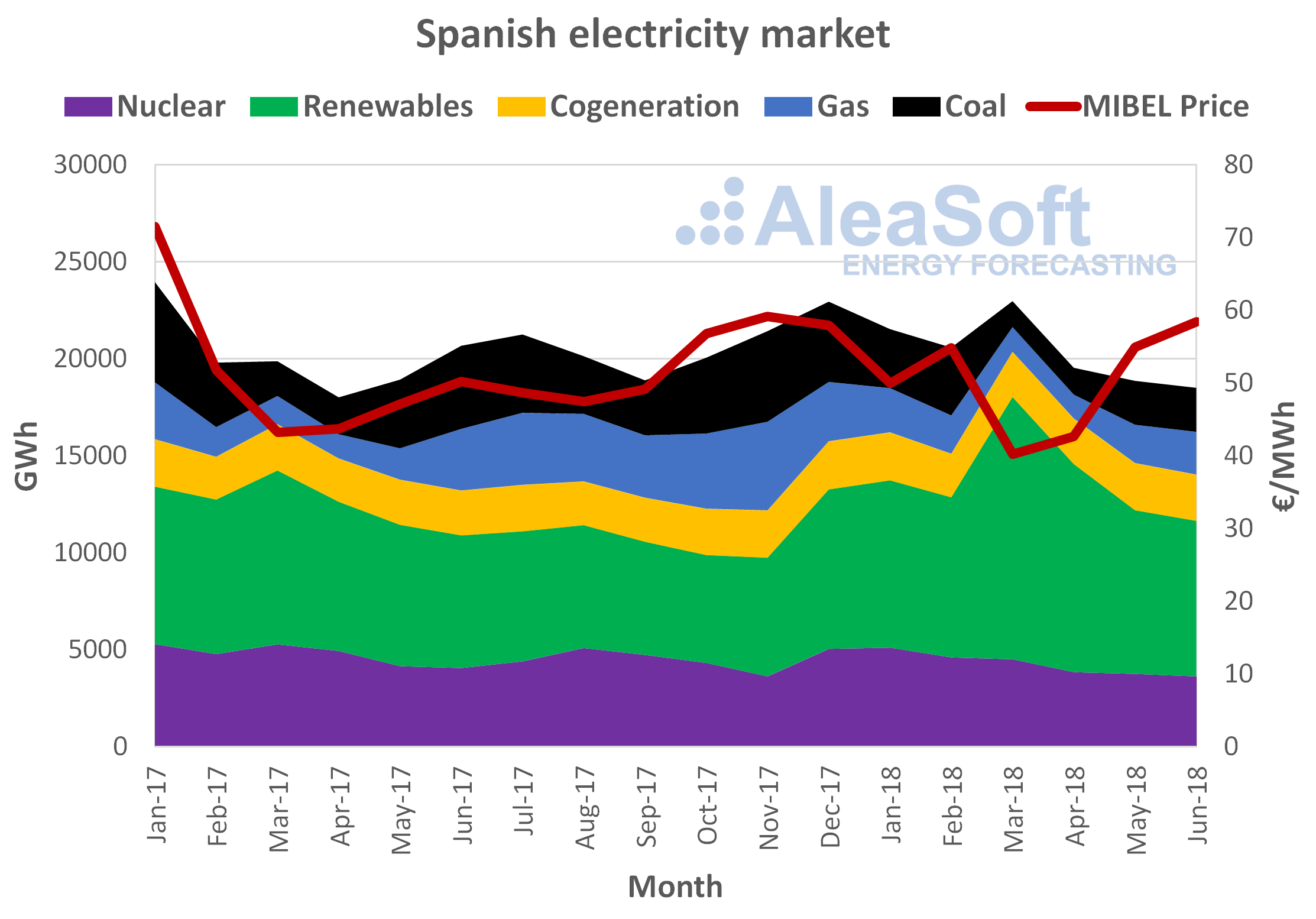 According to AleaSoft, the outlook for the third quarter of this year points to average temperatures, so, if there are no heat waves, the demand factor would not push prices up. It should also be taken into account that water reservoirs are in a good situation in the Iberian Peninsula and in most of Europe, but the seasonal decrease in rainfall for the third quarter of the year will not push the prices down. The hydroelectric production bid offers are made by optimizing the reserves that are available until the end of Q3, with these offers standing at the same level as fossil fuels with the corresponding increase in CO2 plus the associated taxes while there is a thermal gap. Wind energy production does not seem to be going up after a very low second quarter and it is not expected to improve significantly in the third quarter, which is typically low in wind energy production. The reconnection of the Vandellós II nuclear power station expected by the end of July should help to relax the thermal gap and price stress.