AleaSoft, July 2, 2018. The Spanish electricity market closed the month of June as the second most expensive June in the history of the market, ranking among the most expensive markets in Europe.

The hourly price profile of this June has been characterized by a notable increase of the prices in the off-peak hours, when the demand is lower. The average price in the off-peak hours on Tuesdays, Wednesdays, Thursdays and Fridays of this June was 58.58 €/MWh, only 2.63 €/MWh less than the average price in the peak hours of the same days. While in May this price difference between valley and peak was 3.04 €/MWh, and in June of last year it was 3.51 €/MWh. According to AleaSoft, among the main causes of these valley prices is the low wind energy production registered this June, 23.9% below the typical values ​​at this time of year. 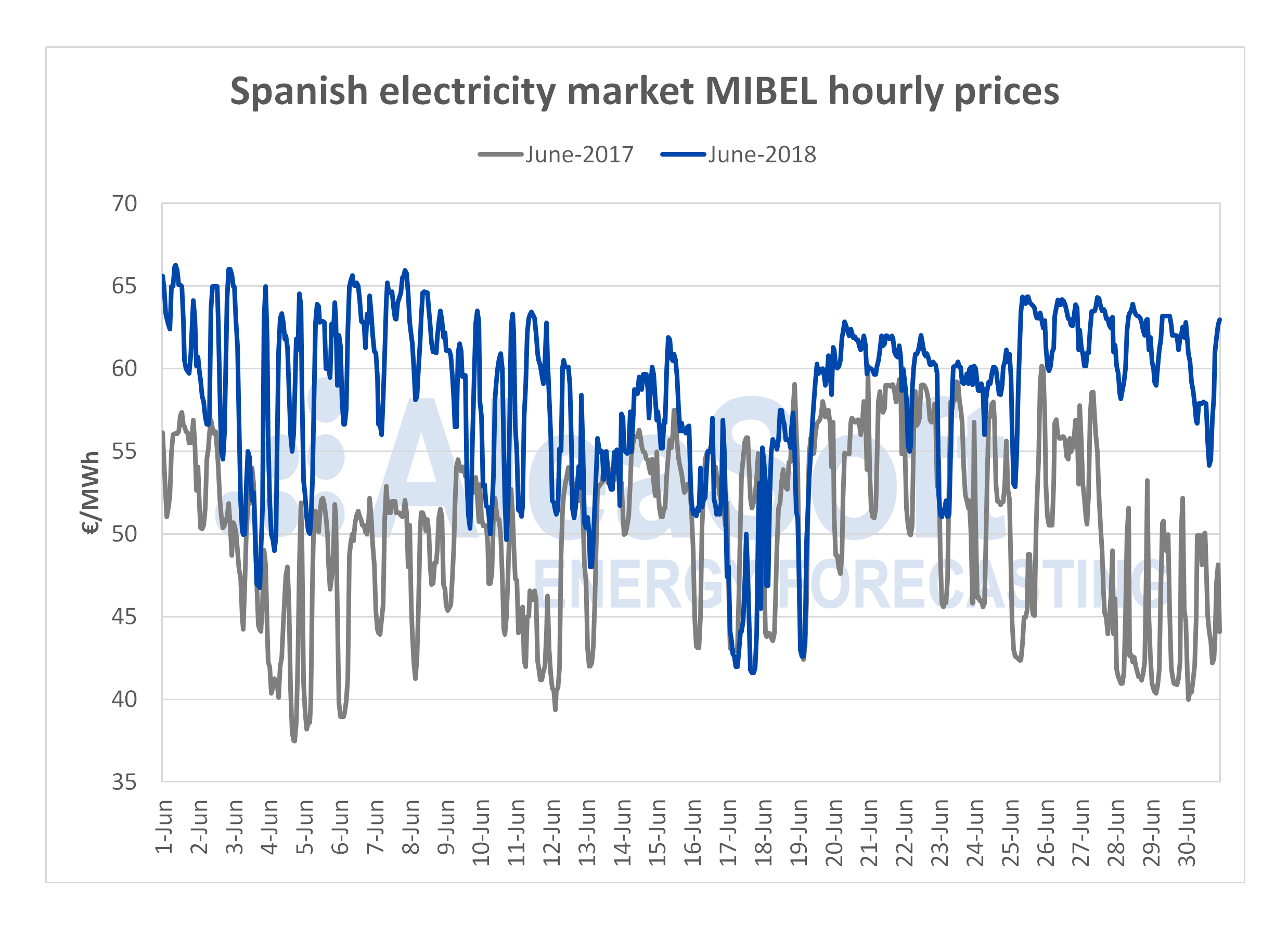 For this month of July, moderate temperatures are expected, unlike July 2017 where average temperatures were registered 0.6°C above the typical seasonal values. This anticipates lower demand for this July, which AleaSoft estimates to be 0.8% lower than in July 2017. Moderate demand implies a downward pressure on the electricity price.

The general trend for the behaviour of the price of gas and coal fuels, of Brent oil and of the CO2 emission rights in this June has been the brake of the upward race of this year 2018. From the commitment of Saudi Arabia to increase the oil production to meet the demand and the supply problems of some of the producing countries, AleaSoft anticipates that in the coming weeks, facing the following months until the end of the year, the price of Brent oil will relax.

The general situation of the main European electricity markets is characterised by the high prices of the traditionally expensive British market N2EX and by the lower prices of NordPool and France and Germany EPEX SPOT. At the beginning of May 2018 the price difference between the most and the least expensive markets was around 40 €/MWh. Bit by bit, this distance has been decreasing until reaching 15 €/MWh at the end of June, because of the price increase of the three cheapest markets, due to the increase in the prices of fuels and CO2. The markets of Italy, Spain and Portugal, which remained in an intermediate range of around 50 €/MWh during the first half of May, were increasing prices until reaching N2EX around 60 €/MWh, a value that AleaSoft foresees to remain the trend in the summer for the UK, Italy, Spain and Portugal and that it has been stationary since mid-May.