Opportunities for renewable energies in other European markets

AleaSoft, July 16, 2021. Europe is faced with the challenge of decarbonising the economy in the next three decades. It will be a path with many opportunities that also include other electricity markets such as those of Poland, Greece, Romania and Serbia, which have attractive prices and a significant part of the electricity generation uses fossil fuels, so there is a long way to go for the development of renewable energies. This places them among those that are arousing the most interest when it comes to analysing possible investments in renewable energies.

On July 15, the webinar “Prospects for energy markets in Europe. European electricity markets: half‑year balance. Vision of the future: green hydrogen” organised by AleaSoft was held. In the meeting, the behaviour of the European electricity markets during the first half of 2021, the current situation of high prices in the markets and the prospects for the second part of the year were analysed. In addition, the vision of the future on the role that green hydrogen will play in the energy transition was discussed. The recording of the webinar can be requested here.

The webinar analysed the evolution of the markets of Poland, Greece, Romania and Serbia, which may be interesting for investors in renewable energies, both because of the prices and because they have a long way to go to increase renewable energy capacity.

Electricity demand of other European markets

The electricity demand of the markets of Poland, Greece, Romania and Serbia in the first part of 2020 was affected by the COVID‑19 crisis, in the same way that it happened in the rest of the European markets. Once the first months of that year passed, each country had its own evolution. In January 2021 the markets of Poland and Romania already recovered the levels of January 2020, when the pandemic had not yet a significant impact on Europe.

The Greek market shows a similar behaviour in summer to that of other southern European markets, such as Spain, Portugal and Italy, in which demand rises due to the increase in temperatures, while in the markets of Poland, Romania and Serbia the behaviour is similar to that of markets such as those of Germany or France, where there is not this effect of demand “peak” in summer. 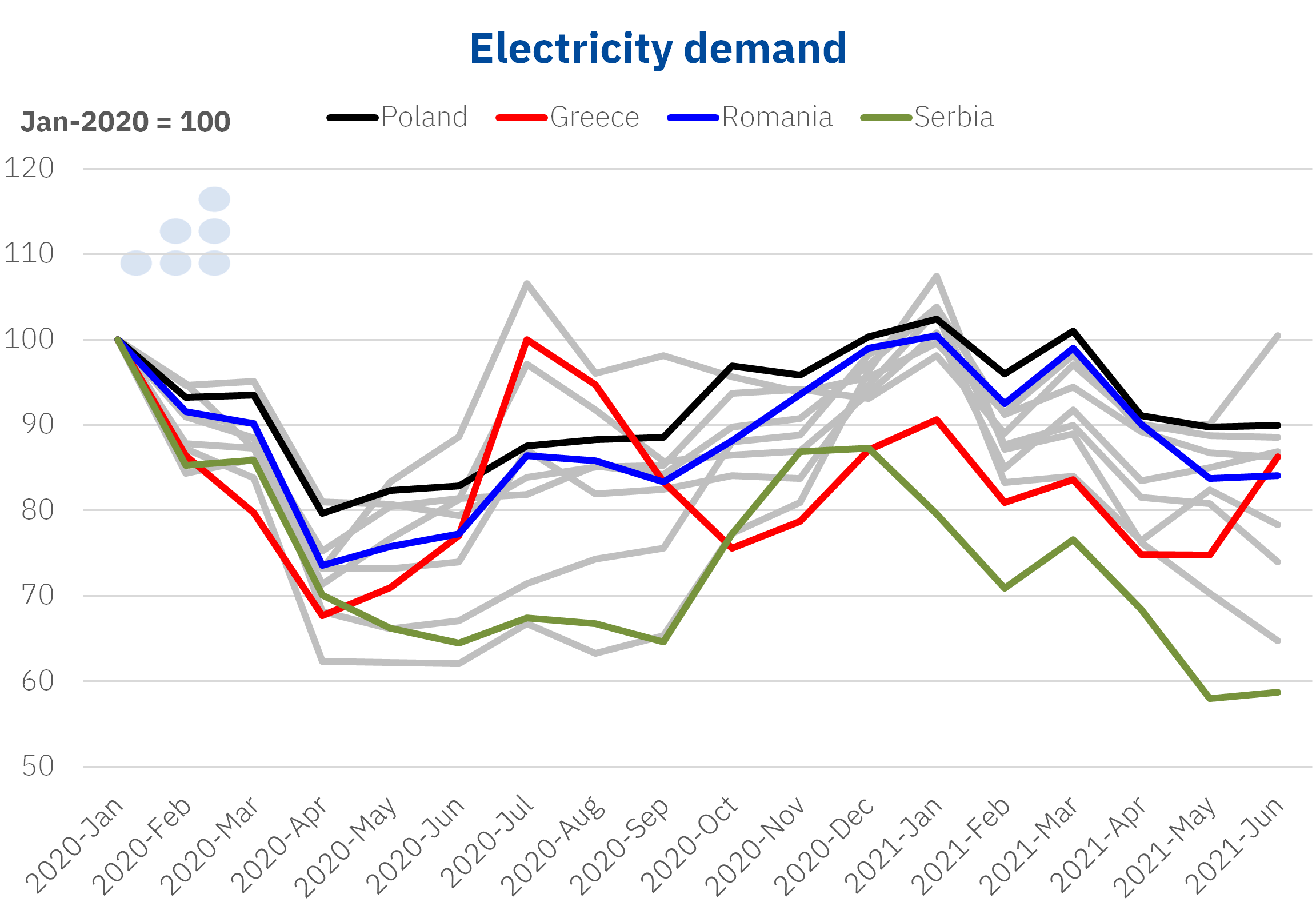 Source: Prepared by AleaSoft using data from ENTSO E and Transelectrica.
The evolution of the electricity demand in other European markets is shown in grey: Spain, Portugal, Italy, France, Germany, United Kingdom and Belgium.

Prices of other European electricity markets

The evolution of the markets of Poland, Greece, Romania and Serbia was similar to that of the rest of the European markets during 2020 and the first half of 2021. In the first months of 2020, the prices fell due to the effect of the pandemic and from there they rose along with gas and CO2 emission rights prices. 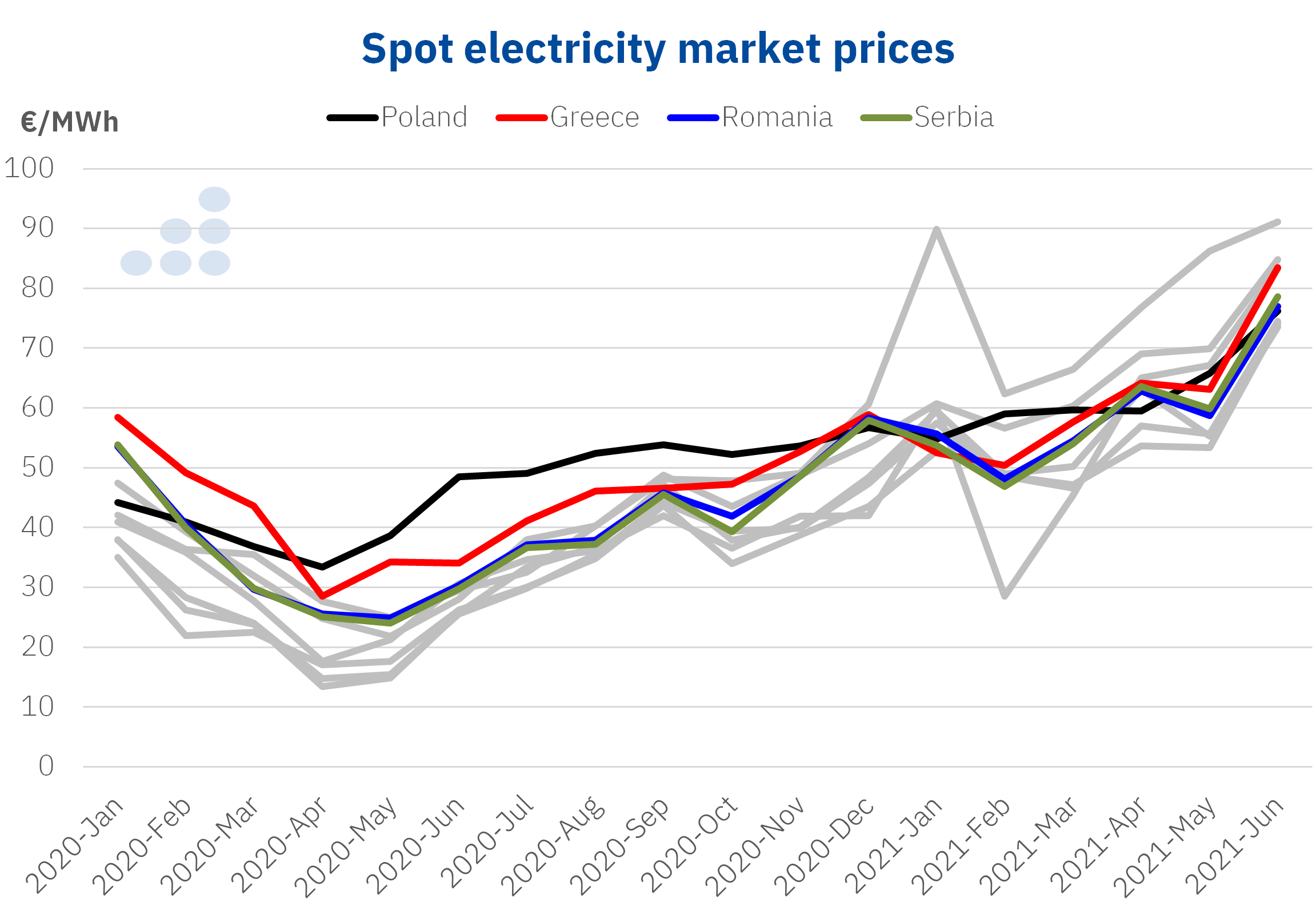 Source: Prepared by AleaSoft using data from TGE, EnEx, Opcom and ENTSO E.
The evolution of the prices of other European markets is shown in grey: Spain, Italy, France, Germany, United Kingdom and Belgium.

Opportunities in other European markets

Precisely the renewable energy projects financing will be one of the topics that will be analysed in the next AleaSoft’s webinar, which will be held on October 7 with the participation of speakers from Deloitte, in addition to those from AleaSoft. This webinar will be held just one year after the webinar of October 2020, which also featured speakers from Deloitte. For this reason, the usual analysis of the evolution of the European energy markets this time will have a year‑on‑year perspective. Another topic that will be analysed is the forecasting importance in audits and portfolio valuation.

Currently, AleaSoft is carrying out promotions of the short‑, mid‑ and long‑term European markets forecasting, among which are the markets of Poland, Romania, Greece and Serbia. These forecasts have a scientific basis and the quality and coherence of the results is endorsed by more than 20 years that AleaSoft has been working for the main companies in the energy sector.