Electricity markets prices continued to rise although with less momentum

AleaSoft, July 12, 2021. The electricity markets prices continued to rise in the second week of July, although with less momentum than they had in previous weeks. Even so, historical highs were registered in several markets. The decrease in demand and the increase in wind energy production favoured prices to fall in some cases. CO2, gas and Brent prices fell after hitting historical highs on Monday to rise again on Friday, albeit without reaching the record values.

For the week of July 12, the AleaSoft‘s solar energy production forecasting indicates that it will increase in the German market, but a reduction is expected in the markets of Spain and Italy. 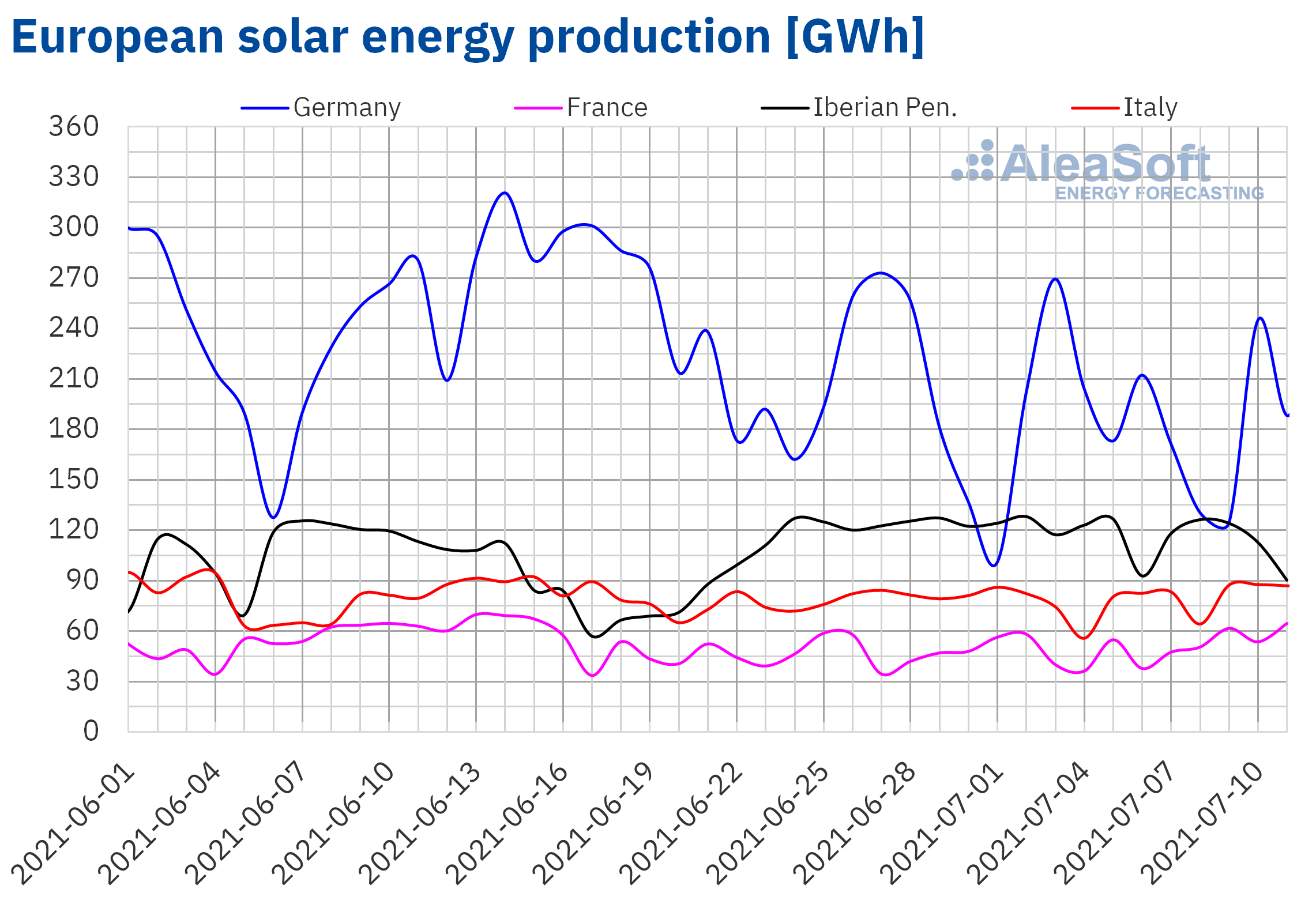 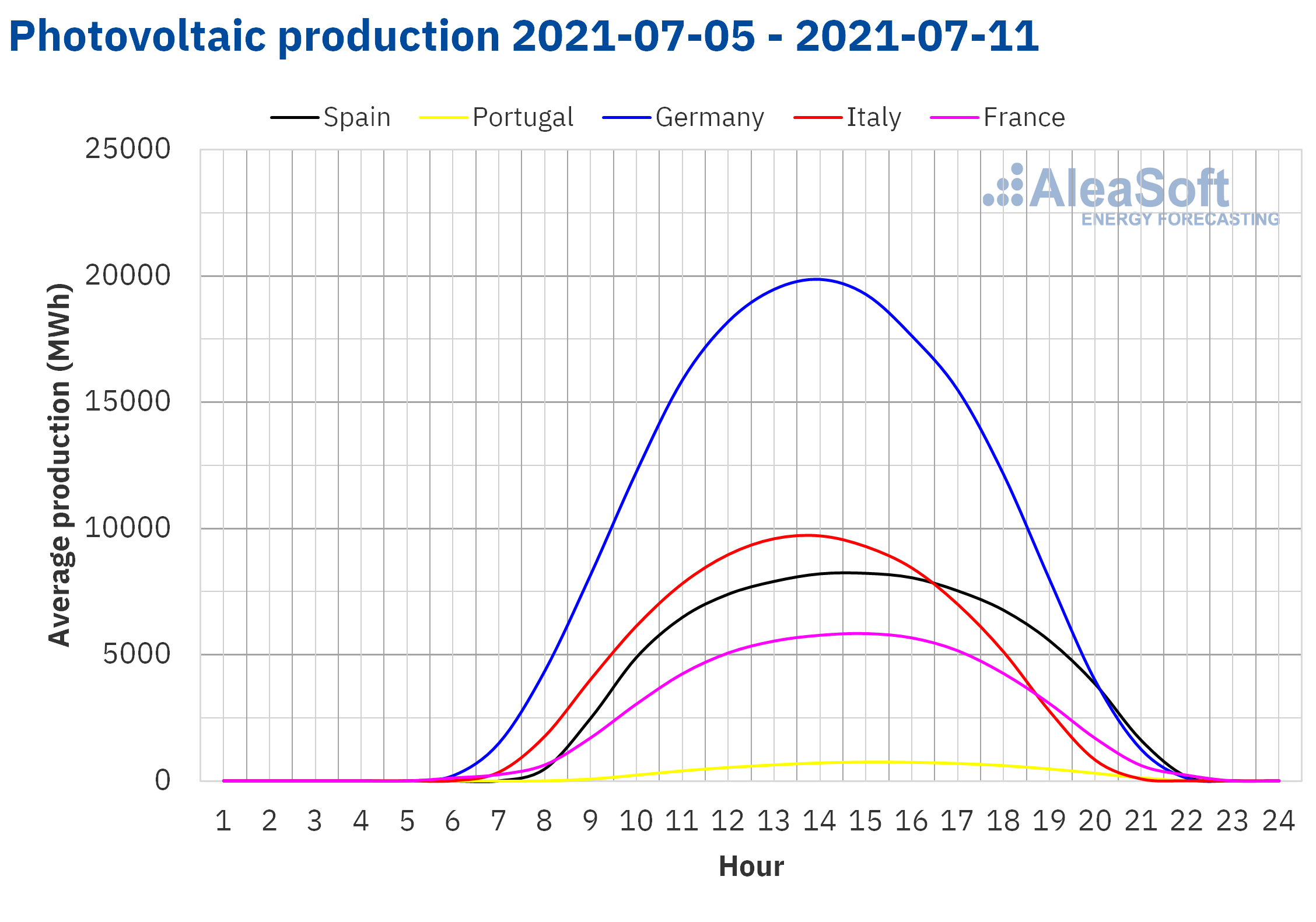 For the week of Monday, July 12, the AleaSoft‘s wind energy production forecasting indicates that it will be higher than that registered the previous week in all the markets analysed at AleaSoft. 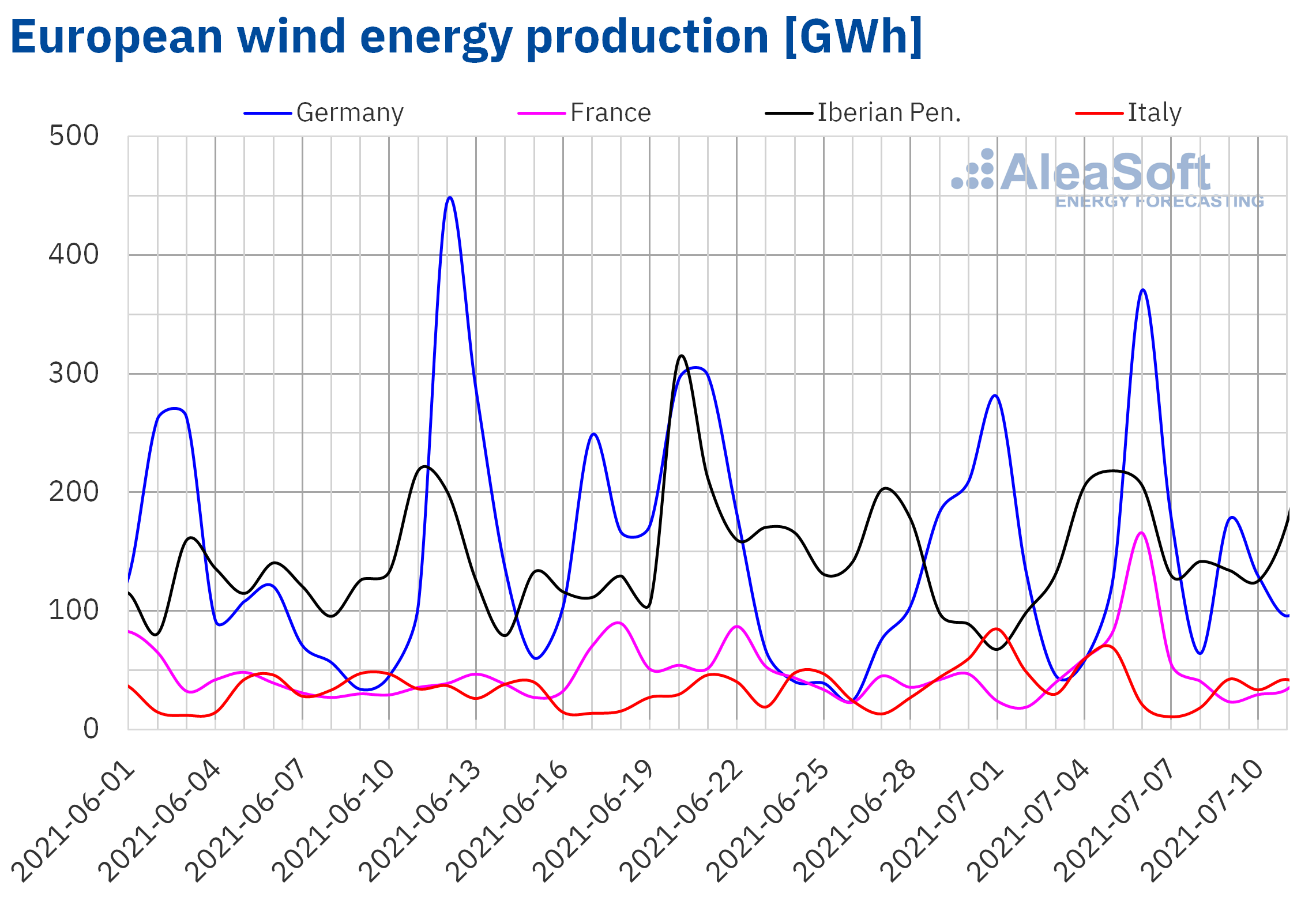 The electricity demand fell in most European electricity markets in the week of July 5 compared to the previous week. In general, the registered decreases were lower than 1.5%. The markets of Belgium, Great Britain, Italy and Germany registered the most notable drops, which were between 0.9% and 1.2%. On the other hand, the increase in average temperatures in Portugal and Spain favoured an increase in demand by around 2.0% in these markets.

The demand is expected to recover in Great Britain in the week of July 12 compared to the previous week and that the same trend as in the week of July 5 will continue in the rest of the European markets, according to the AleaSoft’s demand forecasting. 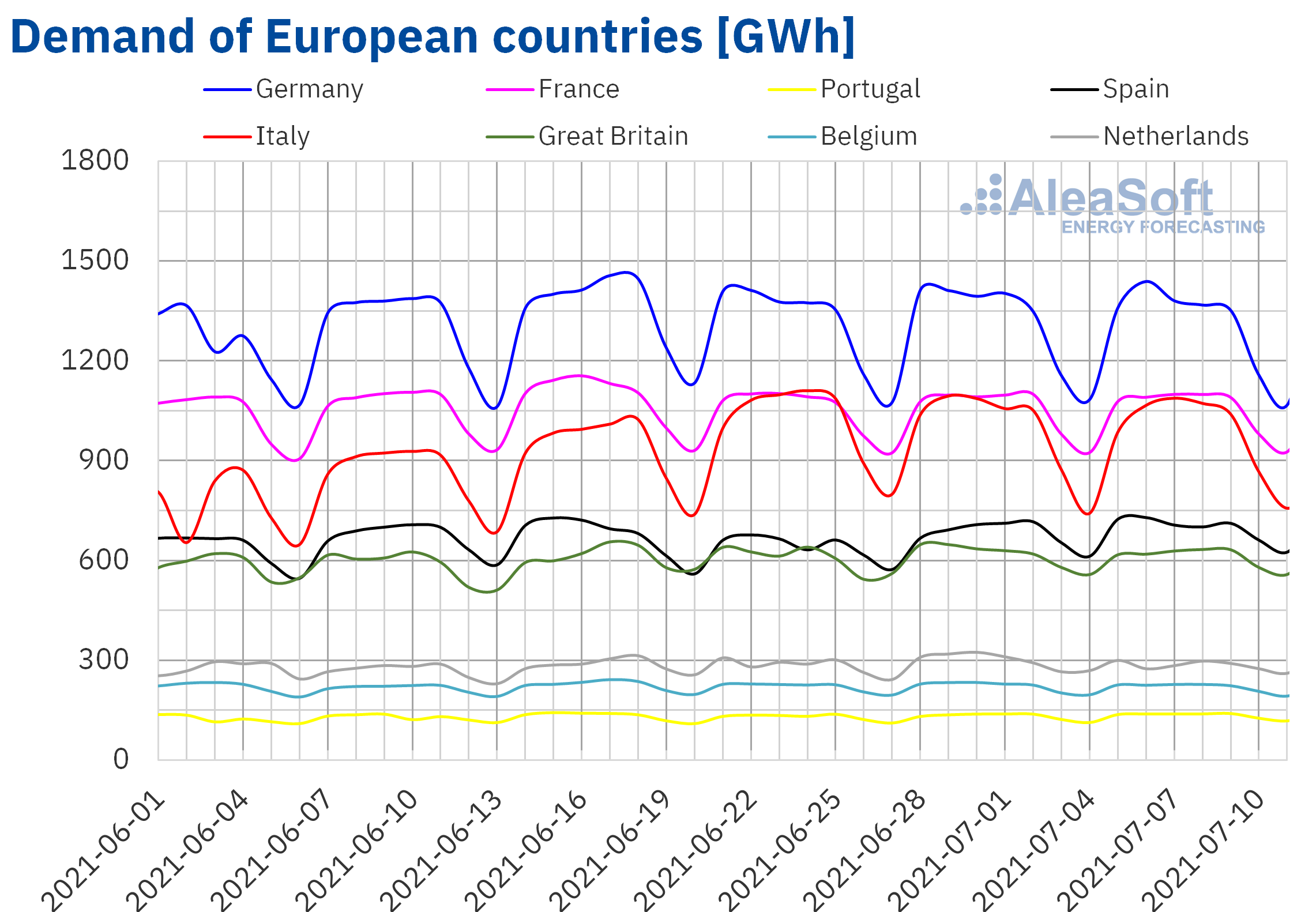 The week of July 5, the prices of most of the European electricity markets analysed at AleaSoft increased. However, in the IPEX market of Italy the prices fell by 3.0% and in the EPEX SPOT market of Belgium and the Netherlands there were decreases of 2.8% and 2.2% respectively, while in the market French there were no variations. On the other hand, the largest price rise, of 8.8%, was that of the Nord Pool market of the Nordic countries. On the contrary, the lowest price increase was that of the EPEX SPOT market of Germany, of 1.1%.

During the second week of July, the daily prices exceeded €105/MWh every day in the British market, from July 6 to 8 in the Italian market and on July 8 in the German market. In the case of the IPEX market, on July 7 a price of €112.73/MWh was reached, which was the highest in this market since July 2015. In the German market, the price of Thursday, July 8, of €109.04/MWh, was the highest since October 2008.

On the other hand, despite the fact that their daily prices did not reach €100/MWh, records were also registered in the markets of Belgium, France and the Netherlands. In the first two markets, with prices of €98.16/MWh and €98.10/MWh respectively, the highest prices since November 2018 were reached on 7 July. In the case of the Netherlands, on July 8, a daily price of €96.04/MWh was registered, the highest since February 2012.

During the second week of July, the decrease in demand and the recovery of the wind energy production in most markets contributed to the fact that in some European electricity markets the prices fell despite the fact that CO2 and gas prices remain high. However, the temporary decline in daily wind energy production favoured the record daily prices reached in countries such as Germany and Italy. 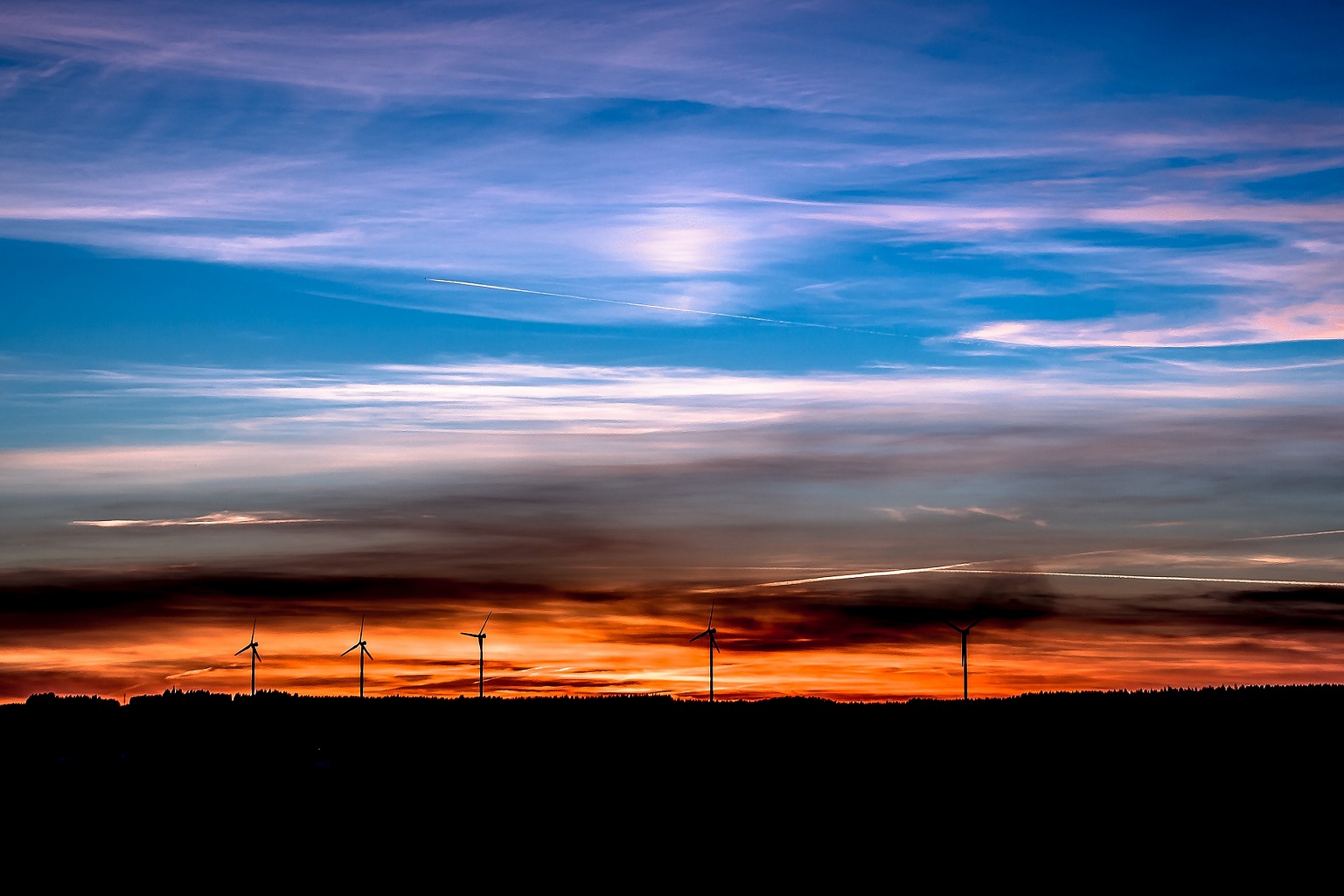 The AleaSoft‘s price forecasting indicates that in the week of July 12, the prices might fall in most European markets, favoured by the general increase in wind energy production in Europe. 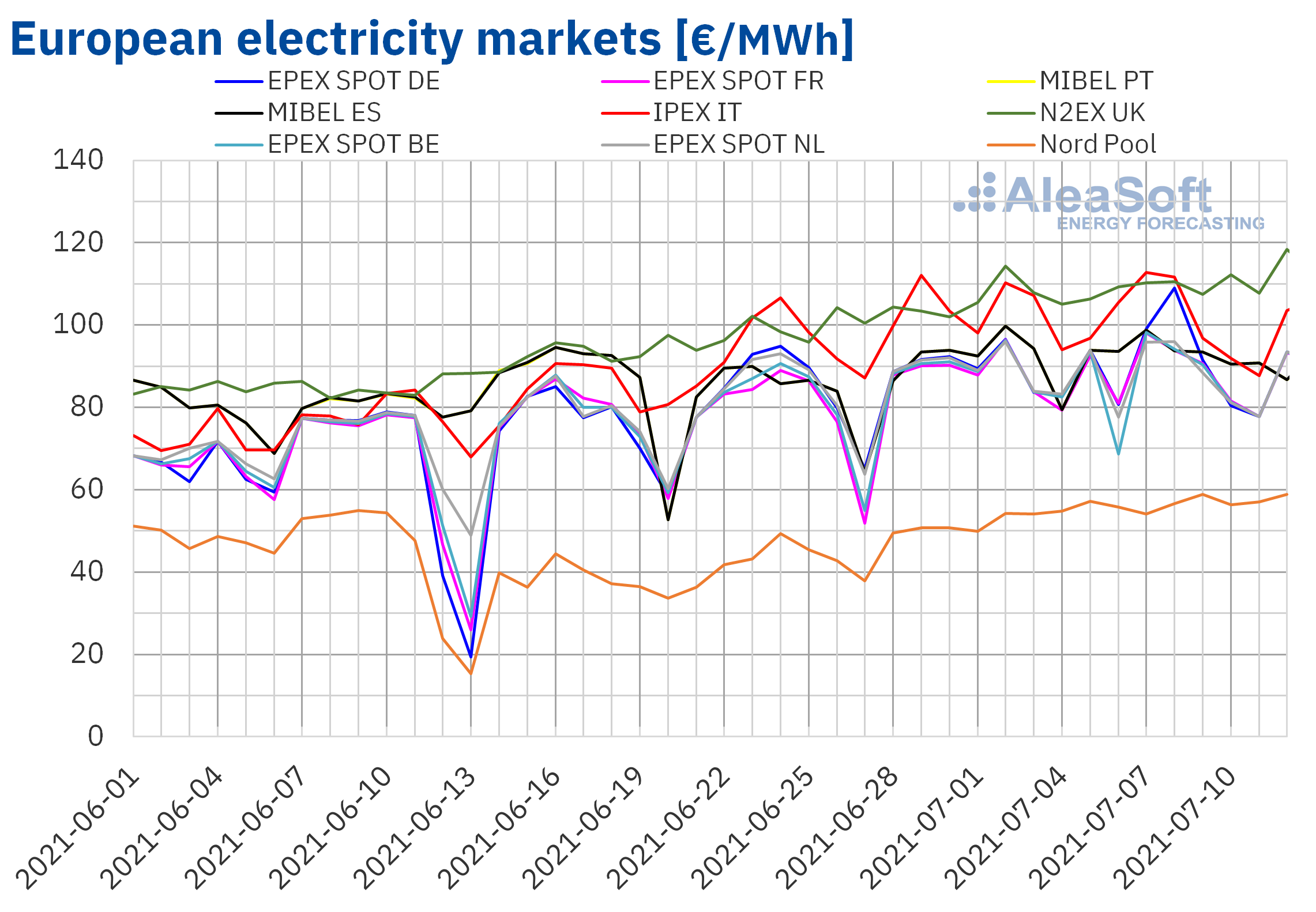 The electricity futures prices for the last quarter of 2021 had a heterogeneous behaviour in the European markets if the settlement prices of the sessions of July 2 and 9 are compared. On the one hand, in the EEX market of Germany, France, Spain and Italy; the OMIP market of Spain and Portugal and the ICE market of the Netherlands, the prices fell. The decreases registered in these markets are between 1.0% and 2.9%. On the other hand, in the EEX market of the United Kingdom, the ICE market of the United Kingdom, Belgium and the Nordic countries, as well as in the NASDAQ market of the Nordic countries, the prices registered increases, which are mostly between 0.2% and 1.2%. The exception is the Nordic area, where the increases in the ICE and NASDAQ markets were 12% and 13% respectively.

Regarding the electricity futures for the next year, the behaviour was also uneven. The prices only increased in the markets of the Nordic countries, both in ICE and NASDAQ, as well as in the markets of the United Kingdom, both in EEX and ICE, with increases of between 0.3% and 6.1%. The OMIP market of Spain and Portugal ended the week with the same settlement price of the previous week for this product in both countries. In the rest of the markets analysed at AleaSoft there were decreases of between 0.4% and 2.2%.

As for the TTF gas futures in the ICE market for the month of August 2021, on Monday, July 5, they reached a settlement price of €37.94/MWh. This price was 18% higher than that of the previous Monday and the highest in the last two years. However, on Tuesday and Wednesday the prices fell sharply to €32.34/MWh. Subsequently, the prices recovered and the settlement price of Friday, July 9, was €36.63/MWh.

On July 14, the European Commission will make public its proposal to meet the new emissions reduction targets for 2030. This might mean the end of the free allocation of emission rights to certain sectors from 2023. This proposal might favour new price increases in the third week of July. 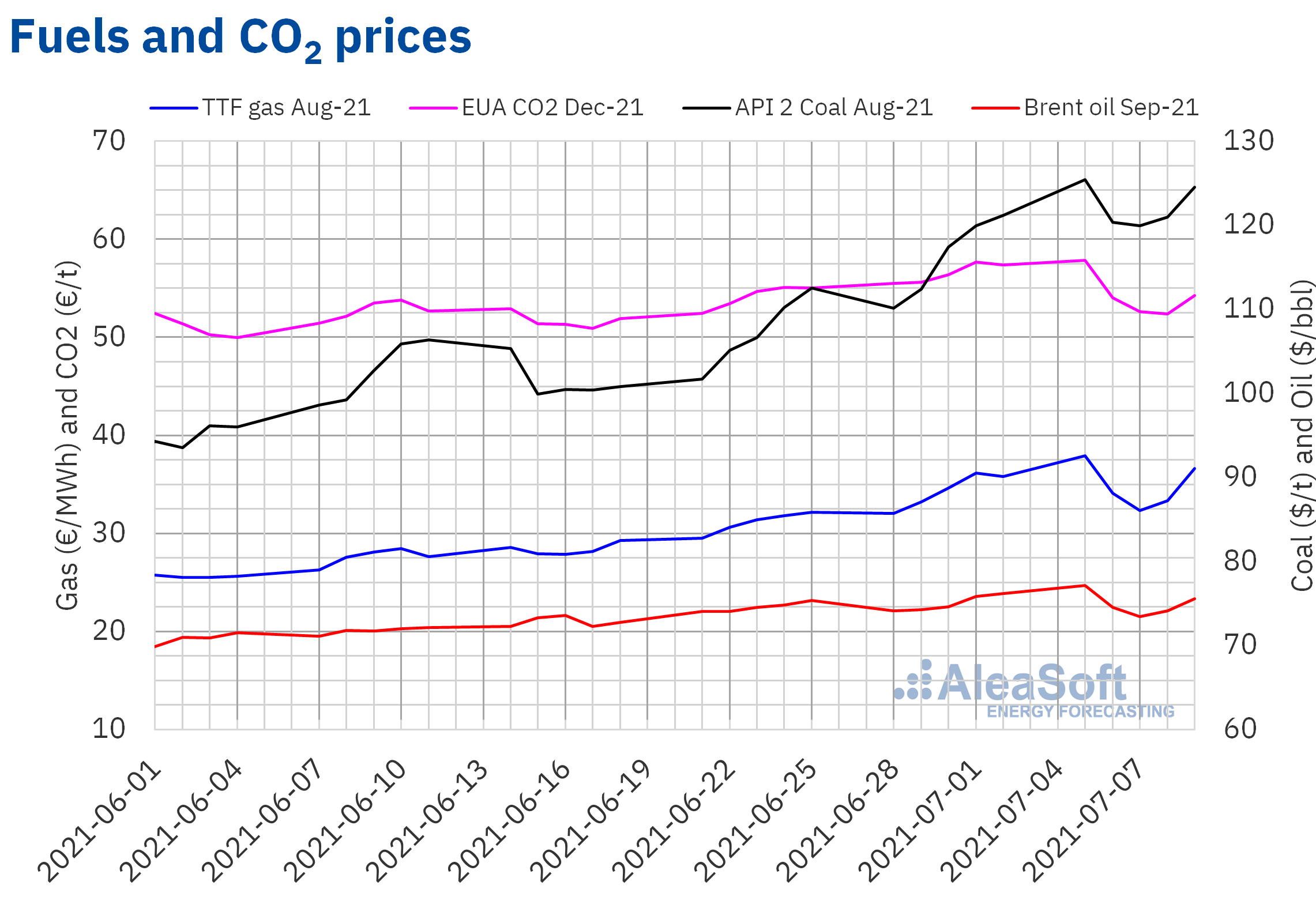 Next Thursday, July 15, the AleaSoft’s webinar “Prospects for energy markets in Europe. European electricity markets: half‑year balance. Vision of the future: green hydrogen” will be held. In the meeting the behaviour of the European electricity markets during the first half of 2021 will be analysed, a period that was marked by the increase in CO2 and gas prices. The analysis will cover the markets that are usually analysed in the AleaSoft‘s monthly webinars, but also other markets that may present opportunities for the agents of the sector such as Poland, Greece, Romania and Serbia. In addition, the prospects for the energy markets in the second half of 2021 and AleaSoft‘s vision of the future on the role that green hydrogen will have in the energy transition will be presented. The speakers will be Oriol Saltó i Bauzà, Manager of Data Analysis and Modelling and Alejandro Delgado, CTO, both from AleaSoft.

Taking into account the increase in CO2 and gas prices, AleaSoft is carrying out special promotions of the long‑term prices forecasting services, essential for the renewable energy projects financing, and those of the short and mid­ term, necessary in the operation of wind and photovoltaic energy parks and in the energy management of retailers, large consumers, utilities and traders.