AleaSoft Energy Forecasting, June 10, 2022. The latest regulatory changes in the electricity sector in Spain to try to mitigate the effects of high prices in the energy markets created a certain feeling of insecurity and instability. According to the experts from Engie Spain, this is a temporary situation that should not affect the long‑term goals of the energy transition and, in fact, the PPA market is still more alive than ever.

On June 9, the 23rd edition of the monthly webinars organised by AleaSoft Energy Forecasting took place, with the participation of guest speakers from Engie Spain. On behalf of AleaSoft Energy Forecasting, Oriol Saltó i Bauzà, Associate Partner of AleaGreen, spoke. Participating on behalf of Engie Spain were Daniel Fernández Alonso, Strategy, Regulatory Affairs and H2 Director, and Ignacio Sáenz Berruga, Head of Origination and Sales. Interested people can request the recording of the webinar.

From Engie they provided their first‑hand view of the effects and consequences of the latest regulatory developments in the energy sector in Spain and the state of the PPA market and the renewable energy projects financing.

Regulatory novelties in the Spanish electricity sector and their consequences

Regarding the recent regulatory changes, evidently, the leading role was taken by the production costs adjustment mechanism for the reduction of the electricity price in the wholesale market published in Royal Decree‑law 10/2022, and which received the final approval of the European Commission just a few hours before. The mechanism, which will start working on June 14, will represent an effective cap on the gas price in the electricity market, which will mean a significant reduction in the market matching price, and consequently in the cost of the electricity bill of final consumers.

At the analysis table, in the second part of the webinar in Spanish, the audience’s questions about the adjustment mechanism focused mainly on how consumers would pay for the compensation to gas power plants for having limited their price in the market. The experts clarified that the principle of the mechanism is that those consumers who benefit from the price drop pay for it. That is, those consumers with contracts indexed to the wholesale market price and those contracts that, even having a fixed price, have been signed after the announcement of the measure, on April 26.

The message that the experts from Engie wanted to convey to the audience was calm. The regulatory situation of the electricity sector is very unsettled due to the need for governments to implement urgent measures in the face of the high prices paid by final consumers. But that all the measures that are being adopted are temporary and, in the long‑term, decarbonisation and the objectives of the NECP (Integrated National Energy and Climate Plan) remain more present and valid than ever. Above all, now that these same objectives will help reduce the external energy dependency of the European Union.

The experts from Engie detailed the benefits of a PPA for developers of renewable energy projects. The main function of a PPA is to eliminate the market prices risk, that is, in the face of a market with very volatile prices, PPA set a price or a price threshold that fully or partially mitigates that risk. They insisted that the general perception that a PPA destroys value for a renewable energy plant is not such. On the one hand, yes, a PPA will offer lower prices than those of the spot market, but on the other hand, this is compensated by the security of a fixed price or a minimum price. So, effectively, the producer is paying a premium to have a guaranteed price. 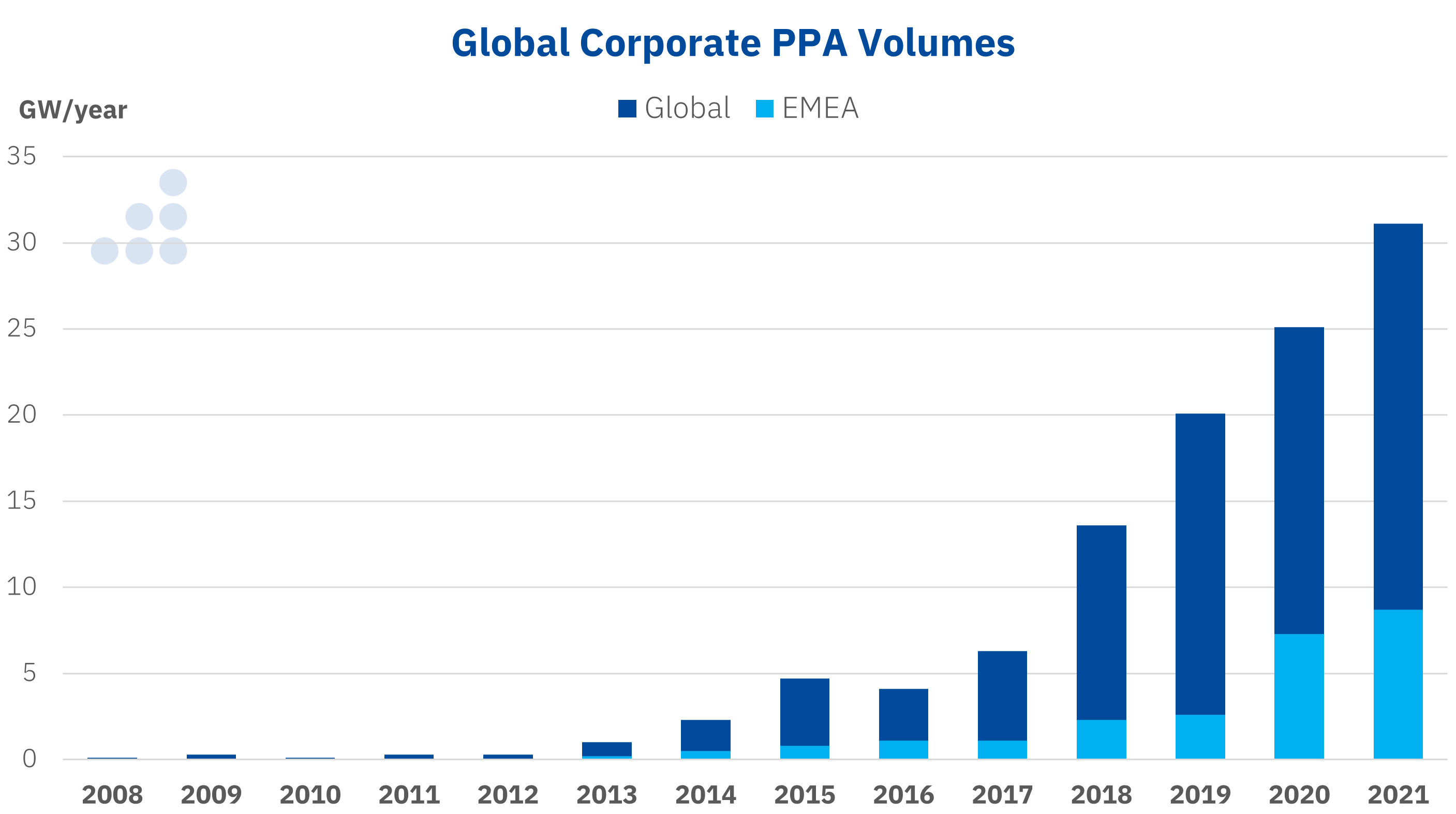 The situation of very high prices in the energy markets in Europe increased interest in PPA by consumers in search of more competitive and stable prices in the long‑term. From Engie, they commented that the PPA demand that they currently have exceeds what they can offer.

It was also highlighted that having long‑term price forecasting with hourly granularity is essential to assess a PPA over the entire horizon. Forecasts of hourly prices and hourly production are also necessary for PPA in base load or fixed volume, to estimate how much energy will be necessary to buy in the market and at what price to meet the monthly energy delivery deadlines in the periods in which there is less renewable energy production either wind or photovoltaic energy.

The next edition, number twenty‑four, of the monthly webinars organised by AleaSoft Energy Forecasting and AleaGreen will focus on green hydrogen and its key and essential role in the energy transition. The webinar will take place on July 14 and will include the participation of Africa Castro, in charge of Business Development at H2B2. As usual, the current regulatory issues of the Spanish electricity sector and the prospects for energy markets in Europe for the next quarters will be analysed.