AleaSoft Energy Forecasting, September 9, 2022. The rapid growth of solar photovoltaic energy in Spain is creating opportunities in the electricity market. The most widespread technology currently used to store energy, pumping power plants, is changing its consumption pattern to take advantage of these opportunities. The energy transition will create new opportunities like this one that will be exploited by new technologies and new demand that will avoid the dreaded curtailments of renewable energy and zero and negative prices in the market.

Reversible hydroelectric plants, better known as pumping power plants, are surely the most mature and widespread technology capable of storing electrical energy generated with any technology. Pumping power plants use electricity from the grid to pump water into an upper reservoir and, subsequently, generate electricity when this water is dropped back into a lower reservoir.

Consuming electricity from the grid and re‑injecting it at a later time. Basically, it is the same that batteries or green hydrogen storage will do when these technologies are sufficiently mature and widespread in the electricity system. So pumping power plants are a mature technology, profitable and present in the system, capable of storing energy and this capacity, that of storing energy, will be key in the energy transition.

The energy storage in the energy transition

The energy storage is going to be the key, together with the increase in the capacities of international interconnections and with the demand flexibility, to be able to manage and take advantage of the wind and solar photovoltaic energy that will be generated at the times when resources, wind and sun, are available and that will not always coincide with the times when the energy demand is greater.

The ability to store energy from renewable sources will make it possible to supply that energy at the exact moment it is needed regardless of when it is generated. In this way, the dreaded curtailments of renewable energy and the zero prices in the electricity markets that are so worrying for investors in new renewable energy projects will be avoided.

The pumping stations in Spain adapt their seasonal production to the wind energy production, which has been the main non‑manageable renewable technology in recent decades. But in recent years, with the rapid growth of solar photovoltaic energy, pumping power plants have begun to adapt their consumption profile to take advantage of the more competitive prices that are beginning to be given in the hours of largest photovoltaic energy production. 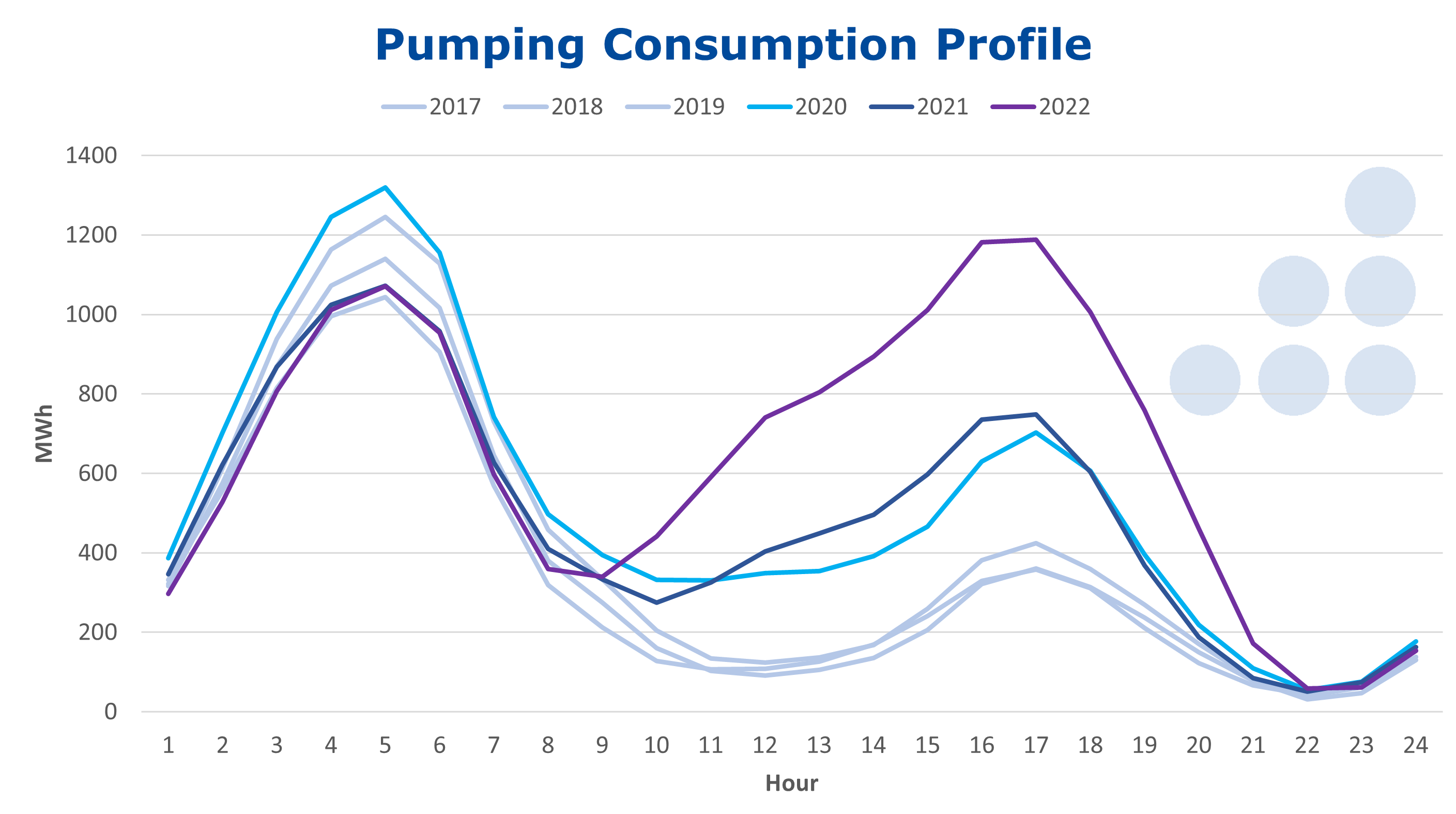 Until 2019, the energy consumed by the pumping power plants in the afternoon peak was around 33% of that consumed in the early morning peak. In 2020, it was already more than 50%, and, in 2021, it reached 68%. With data up to August, in 2022 the consumption peak of the afternoon has already exceeded that of the early morning and, in addition, the consumption of the power plants during the rest of the hours with solar energy production, during the morning and midday, has also increased clearly, as can be seen in the graph above.

The opportunities that the energy transition will create

The change in the consumption profile of pumping power plants is a clear example of the opportunities that the energy transition and renewable energies will bring, and how these opportunities will be exploited.

In the same way that pumping stations have done, the new electricity demand that will be created in the coming decades (electric vehicles, electrification of industry, green hydrogen production, etc.) will take advantage of these opportunities and concentrate on those hours when renewable energies will yield lower prices in the electricity markets.

This is how taking advantage of these opportunities will largely prevent the curtailment of renewable energies. Although it will always be possible for these to occur in an exceptional and isolated manner, the long‑term forecasts of AleaSoft Energy Forecasting do not show it as a recurring or large phenomenon.

The opportunities that will be created during the energy transition and the importance of forward markets for the renewable energy development will be topics that will be discussed in the next edition of the monthly webinars organised by AleaSoft Energy Forecasting and AleaGreen. The meeting will take place on September 15 and will include the participation of Jorge Simão, COO of OMIP, and Pablo Villaplana, COO of OMIClear. At the analysis table after the Spanish version of the webinar, Fernando Soto, Director‑ General of AEGE, will also join them to explain the auction of renewable energy PPA that the association of electro‑intensive consumers is organising.

The webinar of October will feature the participation of speakers from Deloitte again: Carlos Milans del Bosch, Partner of Financial Advisory, and Luís García Tasich, Manager of Global IFRS and Offerings Services. On this occasion, the state of the renewable energy projects financing and the importance of the energy markets price forecasting in audits and portfolio valuation will be analysed.

As usual, Antonio Delgado Rigal, CEO of AleaSoft Energy Forecasting, and Oriol Saltó i Bauzà, Associate Partner at AleaGreen, will also participate in both editions to analyse the evolution of the energy markets in Europe and the main current issues of the sector.