AleaSoft, November 16, 2020. The ministerial order proposal that develops the auctions of renewable energy includes an indicative auction calendar and capacity to be auctioned until 2025. If all the auctions scheduled in this calendar are carried out, 61% of the wind capacity and 87% of the photovoltaic capacity needed to achieve the objectives that the NECP sets for 2025 will have already been fulfilled.

The ministerial order proposal regulating the renewable energy auctions of the Royal Decree 960/2020, of November 3, is already in the public consultation phase. The proposal contains an indicative auction calendar to be carried out until 2025 in addition to the conditions and the types of renewable energy facilities that may be eligible for the public remuneration system.

Based on the proposed calendar, a wind and photovoltaic capacity scenario can be built and compared with the target scenario of the NECP (National Energy and Climate Plan). From this comparison, it can be deduced that the Government expects the auctions to incorporate 61% of the wind capacity and 87% of the photovoltaic capacity into the electricity system to achieve the objectives that the NECP sets for 2025, which is, without a doubt, a quite aggressive calendar. 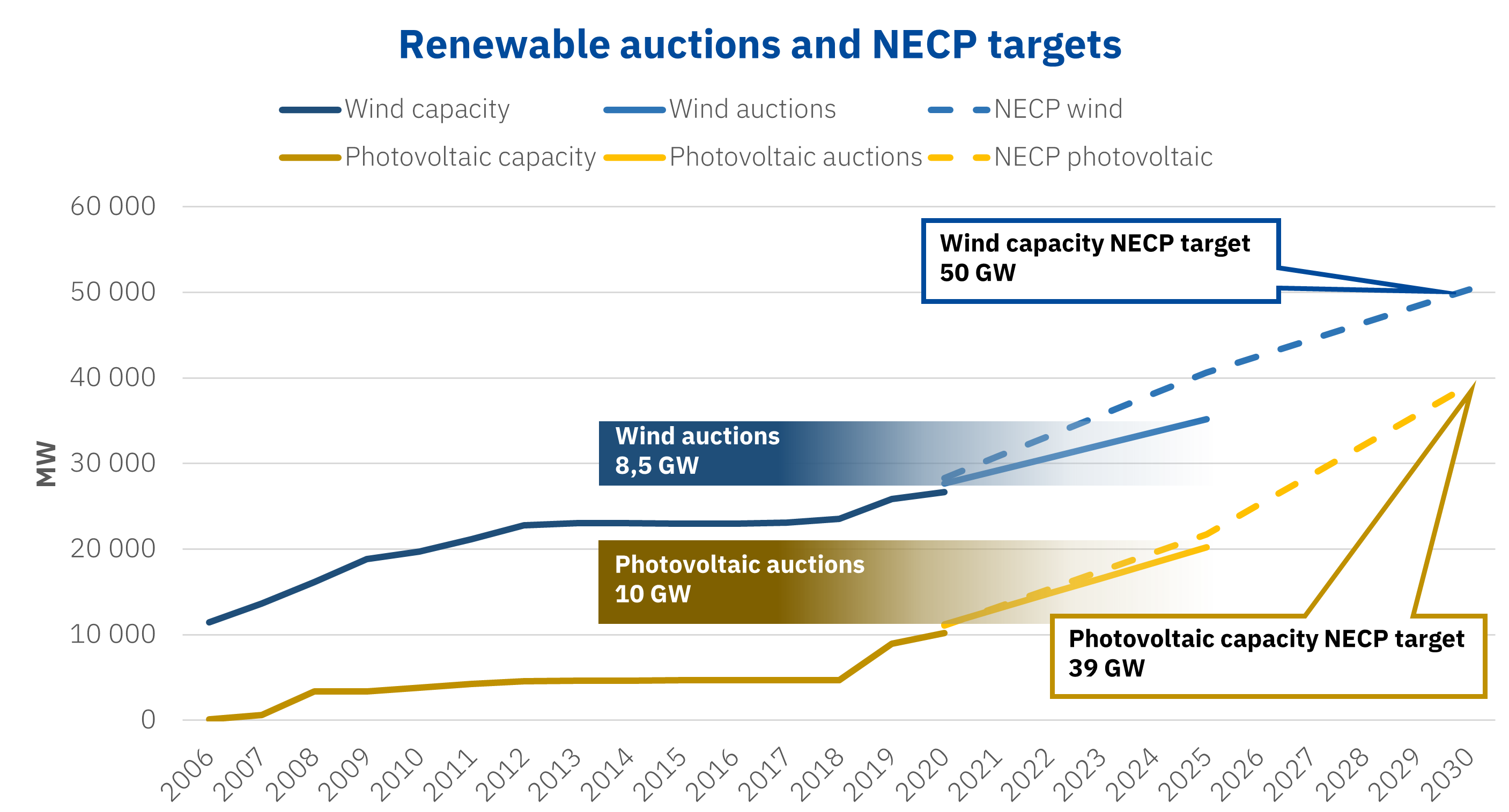 Source: Prepared by AleaSoft using data from REE and Ministry for Ecological Transition and Demographic Challenge.

From the AleaSoft consulting firm, the usefulness of the auctions in certain conditions, such as the economic reactivation of regions affected by the decarbonisation of the electricity sector, in the islands and in the northern regions with less solar resource, or for less mature or more experimental technologies, was highlighted on several occasions, but also that it should not be an instrument to force the achievement of the renewable capacity objectives of the NECP. The photovoltaic energy is a fully competitive technology in the electricity market and the objectives of the NECP are achievable without the need for auctions. An “abuse” of the auctions would lead to clear distortions in the market prices and would be a sign that would discourage the investment in new renewable energy facilities.

An essential aspect of the auctions, according to the consultancy, is that the opinion of the investors, who are those who put and will continue to put the necessary money to develop all the renewable capacity, must be taken into account. And it does not refer only to large investment funds, but also to medium and small investors in renewable energy that need guarantees of future with clear signals and without regulatory changes.

One of the most positive aspects of the auctions proposal is that it will allow hybrid facilities that combine different renewable technologies and also facilities with energy storage capacity. This combination of different technologies and also with storage is going to be essential in a 100% renewable future, since it provides the necessary flexibility to manage the dump of energy to the electricity system, something that many renewable technologies cannot do by themselves.

Next webinar of AleaSoft

The next webinar that is being prepared at AleaSoft will take place on November 26 and it will be the last of this year 2020. This webinar will be the first part of a new series “Prospects for the energy markets in Europe from 2021” that will have, at least, a second part in January 2021. This time there will be the participation of three speakers from Vector Renewables.

In addition to analysing the behaviour of the energy markets since the economic crisis began, the prospects from 2021 will be discussed. The central topics of this webinar will revolve around the design of the new renewable energy auctions and their effect on the market, as well as the technical Due Diligence and its importance for the projects financing.