The solar energy production of Mainland Spain, which includes photovoltaic and solar thermal technologies, increased by 6.4% last week compared to the week of October 14. In the case of Italy, there was an increase of only 1 GWh and in Germany it decreased by 13%, in both cases compared to the previous week. At AleaSoft it is expected that during this week the productions with this technology in these three countries will experience setbacks.

During the days elapsed in October, the solar energy production in Spain was greater than that of October 2018, with an increase of 28%. In Italy, the production with this technology increased by 11% over the same period last year, while in Germany it decreased by 18%. 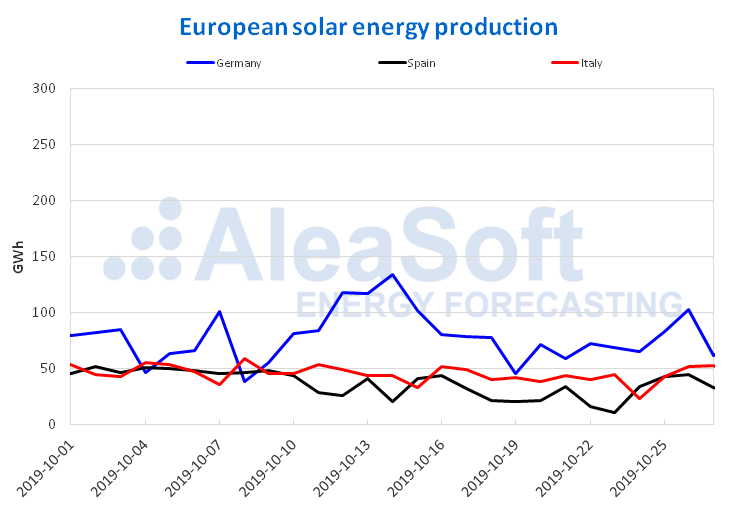 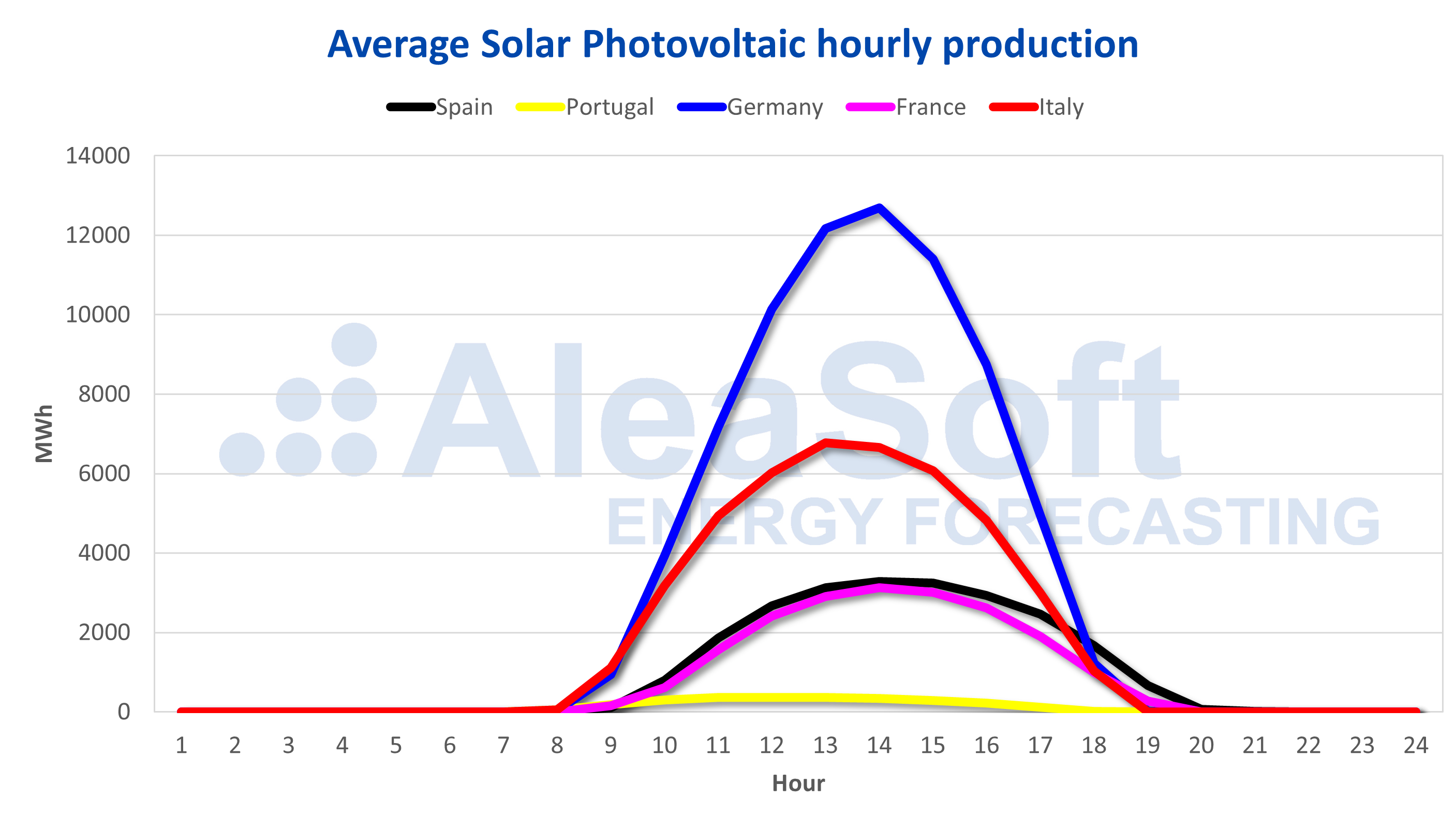 The wind energy production in France and the Iberian Peninsula fell significantly last week compared to the week of October 14, with the ‑36% difference in Spain being the most notable. In Germany, the production with this technology was 12% higher than that of the previous week, while the percentage increase in Italy was 6.0%. For this week, increases in generation with this technology are expected in France and Spain, as well as decreases in the rest of the countries analysed.

Until yesterday October 28, the production in this month of October was higher than that of October 2018 in Italy, Germany and France, with increases of 2.5%, 26% and 60% respectively. However, in Spain and Portugal the productions with this technology decreased by 3.2% and 6.3% respectively, when compared with the same period of 2018. 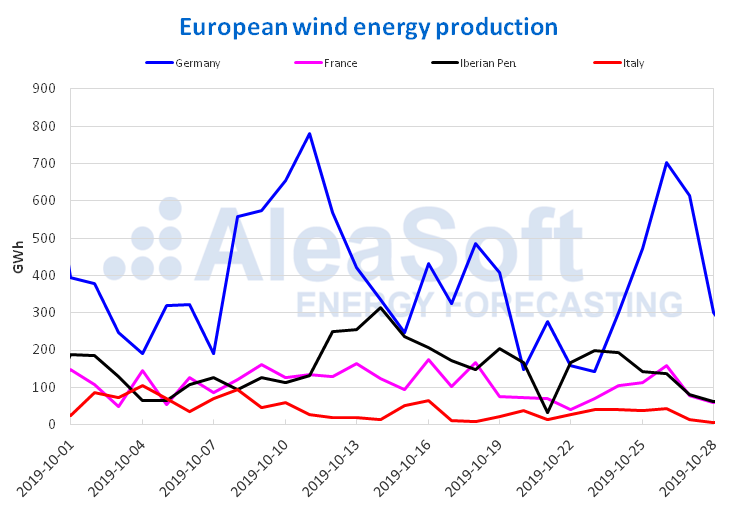 The European electricity markets prices behaved in a heterogeneous manner during the last week compared to the week of October 14. The EPEX SPOT market in Germany, with a variation of ‑6.0%, was the one with the lowest price of the week. In this same market, the prices for the first hours of Sunday, October 27, reached negative values ​​due to the high wind energy production recorded during the weekend, reaching a minimum price of €‑34.57/MWh in the second hour of the day . Together with the German market, the EPEX SPOT market of France, the N2EX market of Great Britain and the IPEX market of Italy, presented declines between 0.9% and 19%, the Italian market being the one with the highest recorded variation during last week. The rest of the countries analysed increased between 0.1% corresponding to the EPEX SPOT market of the Netherlands and 9.6% in the MIBEL market of Spain. In general, the behaviour of the prices during the past week was determined by the variations of the renewable energy production, mainly by the wind energy.

Regarding the group of markets with the highest prices, the MIBEL market of Portugal, with an increase of 9.4% and a weekly average of €48.01/MWh, topped the list during the past week, followed for the MIBEL market of Spain that settled with a difference from the first of €0.06/MWh, with €47.95/MWh. The N2EX market of Great Britain was the market with the lowest price in this group, settling with a weekly average of €42.48/MWh.

This Monday, October 28, the MIBEL market of Spain, with a daily average of €53.85/MWh, was the one with the highest price among the European countries analysed, followed by the MIBEL market of Portugal, which averaged €53.65/MWh. While at the other end the Nord Pool market settled with an average price of €40.38/MWh, the lowest on this day. The rest of the European markets analysed moved between €42.28/MWh of the EPEX SPOT market in the Netherlands and €48.97/MWh of the Italian IPEX market. 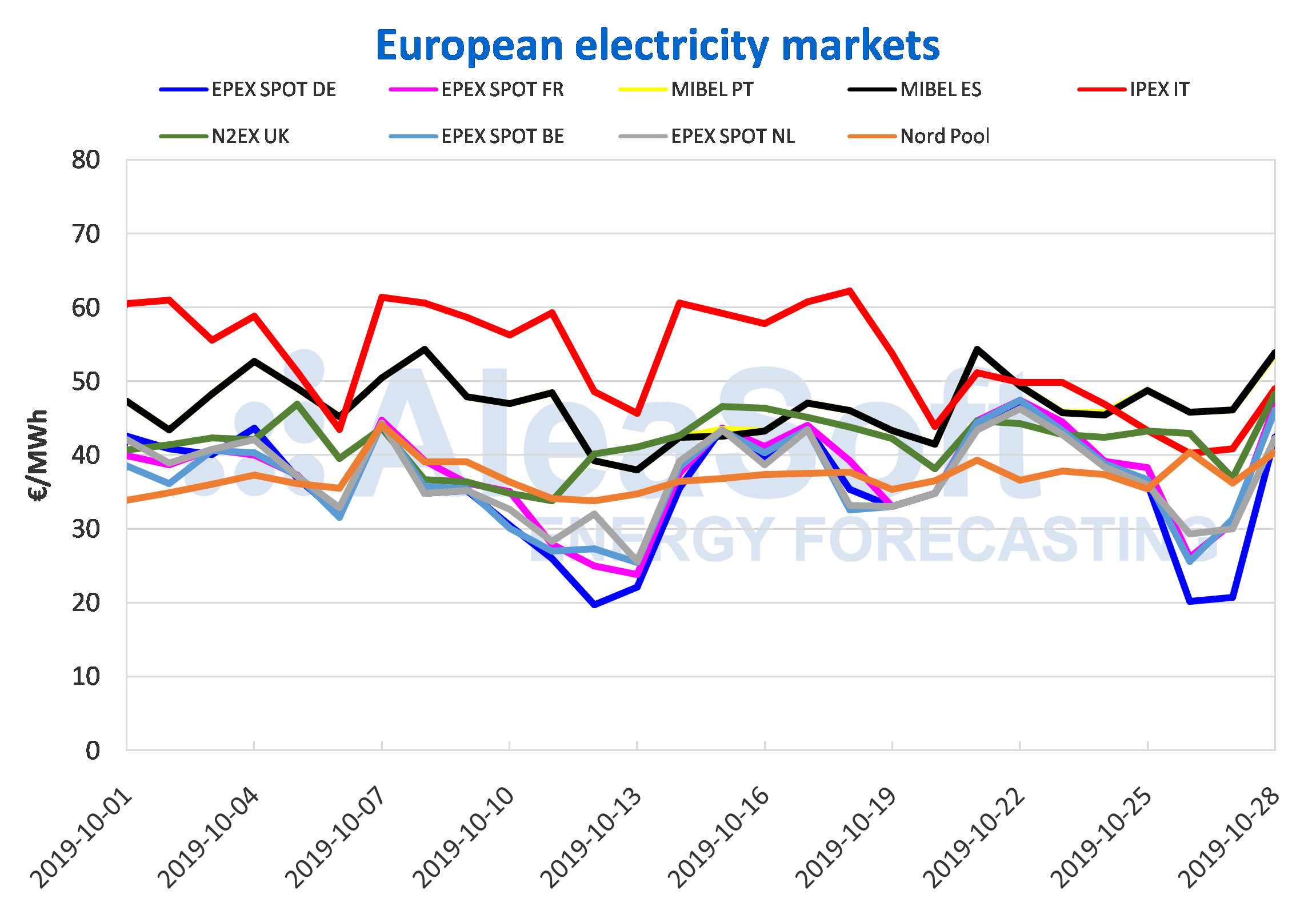 The comparison of the prices of the electricity futures between last Friday, October 25, and Friday, October 18, shows a drop for the product of the first quarter of 2020 in almost all European markets, with the exception of the Nordic countries. In both the ICE and NASDAQ markets, the futures for the next quarter of the Nordic countries registered increases of 1.9% and 1.1% respectively. Meanwhile, in the rest of the European markets analysed the greatest change can be seen in the EEX market of France, with a difference of ‑4.5%, while the futures of Spain, also of EEX, were the ones with the lowest drop for this product, with a ‑0.9% decrease.

In view of the futures for the following year, a very similar situation occurs. The Nordic countries increased their price in both ICE and NASDAQ, in this case by 1.0% and 0.7% respectively. While in the rest of the countries the declines were between ‑0.2% of Spain in the EEX market to the largest variation of ‑3.3%, in this case equalled between Germany in the EEX market and Belgium in the ICE market.

The last days of last week, the Brent oil futures prices for the month of December in the ICE market, continued the upward trend that began on Tuesday, October 22. However, on Thursday and Friday they experienced more discrete increases than the previous days, of 0.8% and 0.6% respectively. As a result of these increases, the settling price on Friday, October 25, was $62.02/bbl, the highest so far in October. The low levels of US oil reserves are behind this upward trend. Despite the concerns about the global economic slowdown, if the production adjustments and the instability in the Middle East continue, this trend could continue over the next few days.

The TTF gas futures prices in the ICE market for the month of November, after experiencing continued declines since October 17, on Thursday, October 24, grew 1.6% over the previous day. That day the settling price reached was €15.66/MWh, the highest of last week. On the other hand, on Friday, October 25, with a settling value of €15.24/MWh, the prices fell again 2.7% compared to Thursday, reaching the minimum of the week and so far this month. The excess gas supply is hindering the price increase, although the decrease in temperatures could increase the demand in the coming days.

The API 2 coal futures prices in the ICE market for the month of November continued to fall until the end of last week and it is already the second consecutive week in which this behaviour is maintained. The maximum decrease in prices of last week, of 2.0% compared to the previous day, occurred on Friday, October 25. As a result of the downward behaviour experienced, the settling price on Friday, October 25, was $57.25/t, the minimum value recorded in the month of October. The increase in the demand associated with falling temperatures, together with lower wind and solar energy production in the coming days, could slow down the decline in coal prices.

The CO2 emission rights futures prices in the EEX market for the December 2019 reference contract, after two days of declines on Tuesday and Wednesday of last week, on Thursday, October 24, increased by 2.7% over the previous day. However, on Friday, October 25, its value fell again by 1.8% to €24.98/t, the second lowest price of the week after the €24.76/t of Wednesday, October 23. The prices are expected to rise in the short term after the announcement of the extension of Brexit, until January 31, 2020, approved today by the European Union. 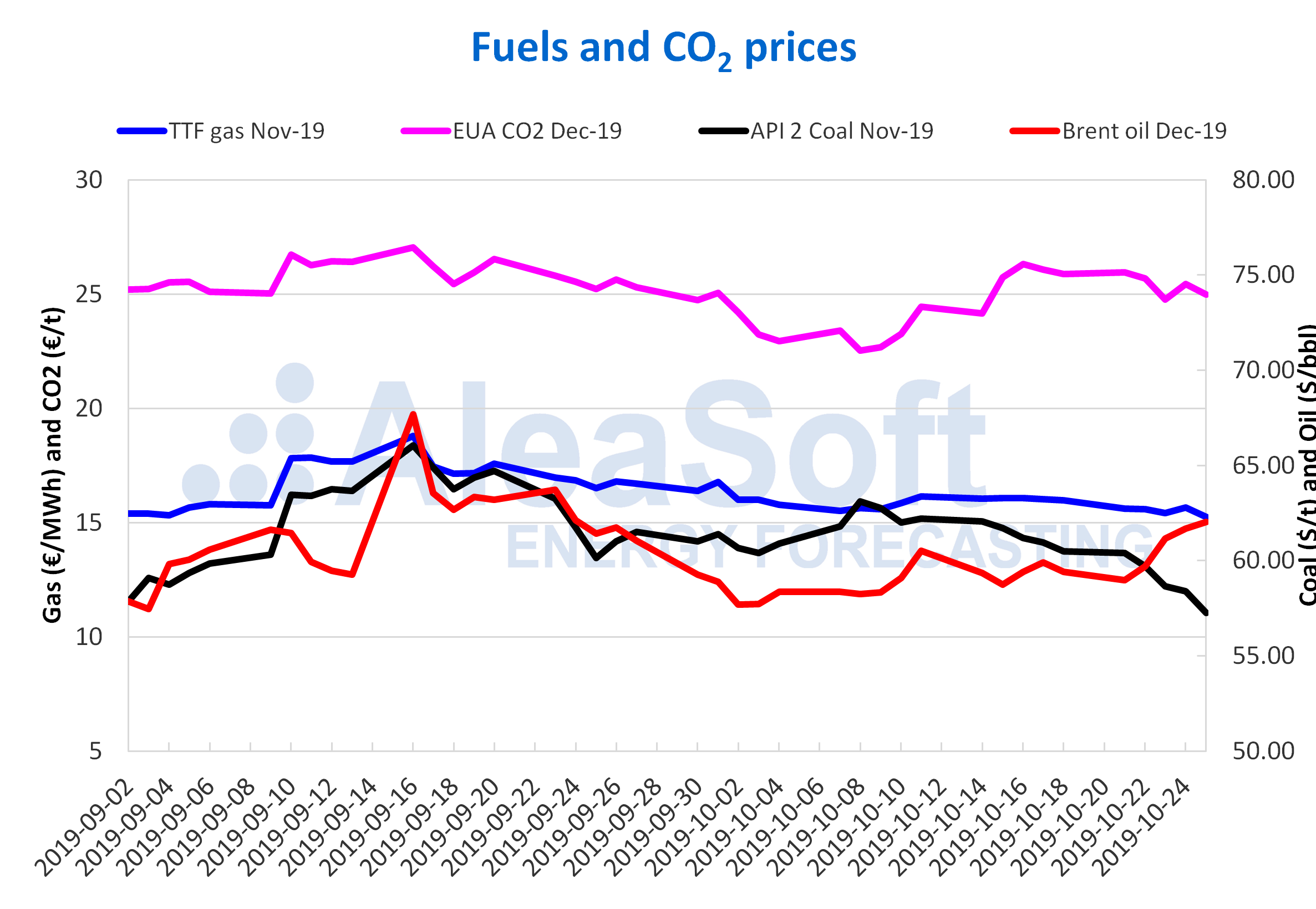