In the renewable energy auctions of last week in Germany, a capacity of 150 MW of solar technology was auctioned and the lowest price of the winning bids for the energy produced was €45.90/MWh. The solar energy auction was characterised by the large number of offers submitted, 153, which added a volume of 648 MW. 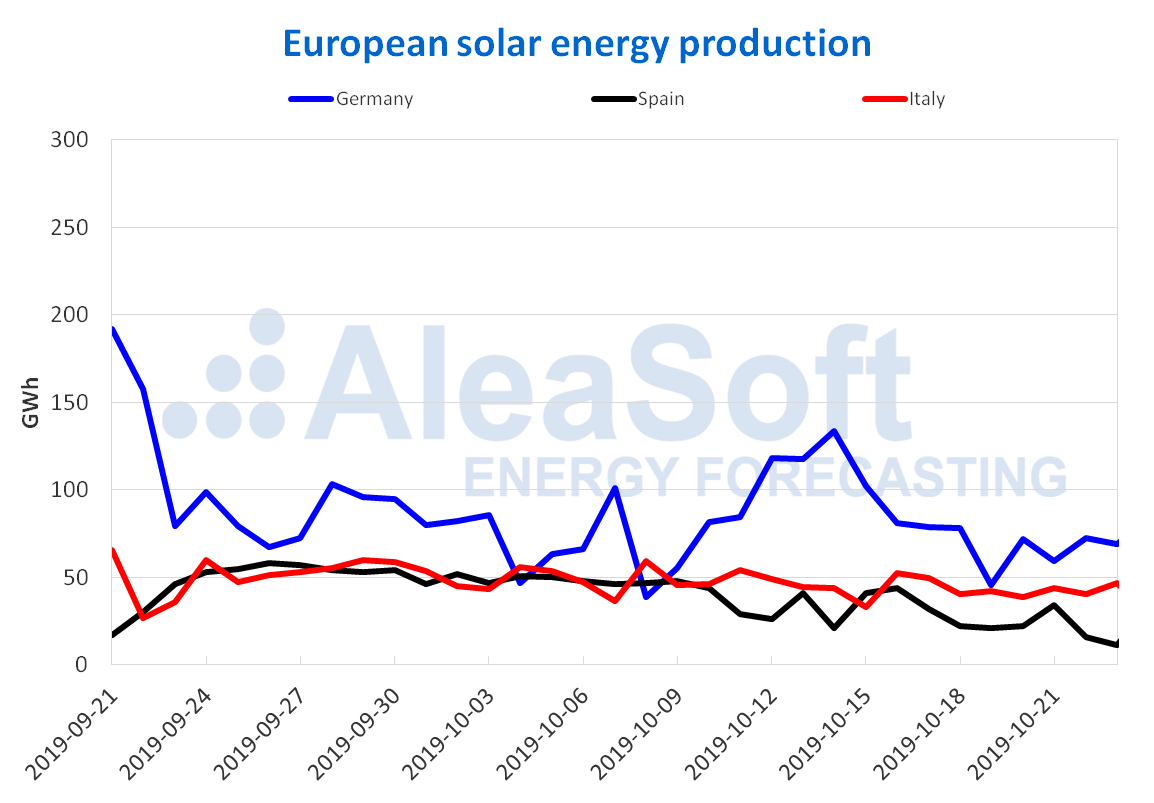 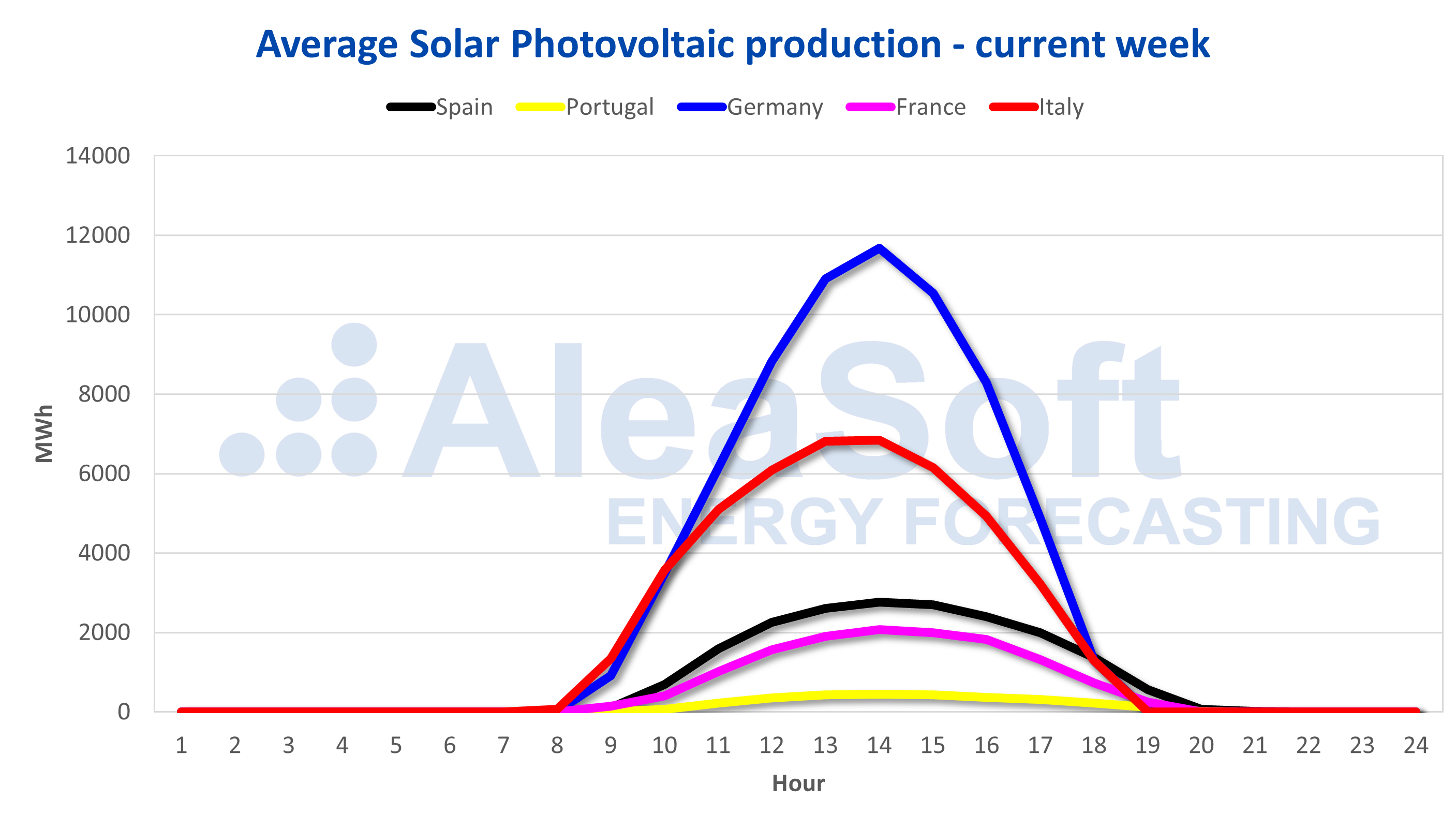 During the first three days of this week the average wind energy production fell in all the European countries analysed compared to last week’s average. The largest decrease occurred in France, of 47%. The productions in the Iberian Peninsula and in Germany were well below, 36% and 43% less. At AleaSoft it is expected that in the whole of the current week the production with this technology in Germany will end up being superior to that registered last week. For the rest of the countries, the production is expected to be lower. So far this month, the wind energy production was much higher in France and Germany compared to that recorded between October 1 and 23 last year, becoming more than double in the French case. In Italy, the production also increased in October of this year, taking this period from last year as a reference. On the contrary, in the Iberian Peninsula the production decreased by 8%.

In the case of the Germany’s wind energy auction last week, the winning bids, which totalled a volume of 204 MW, did not cover the auctioned capacity of 675 MW, reaching a price of €62.00/MWh for the energy produced. 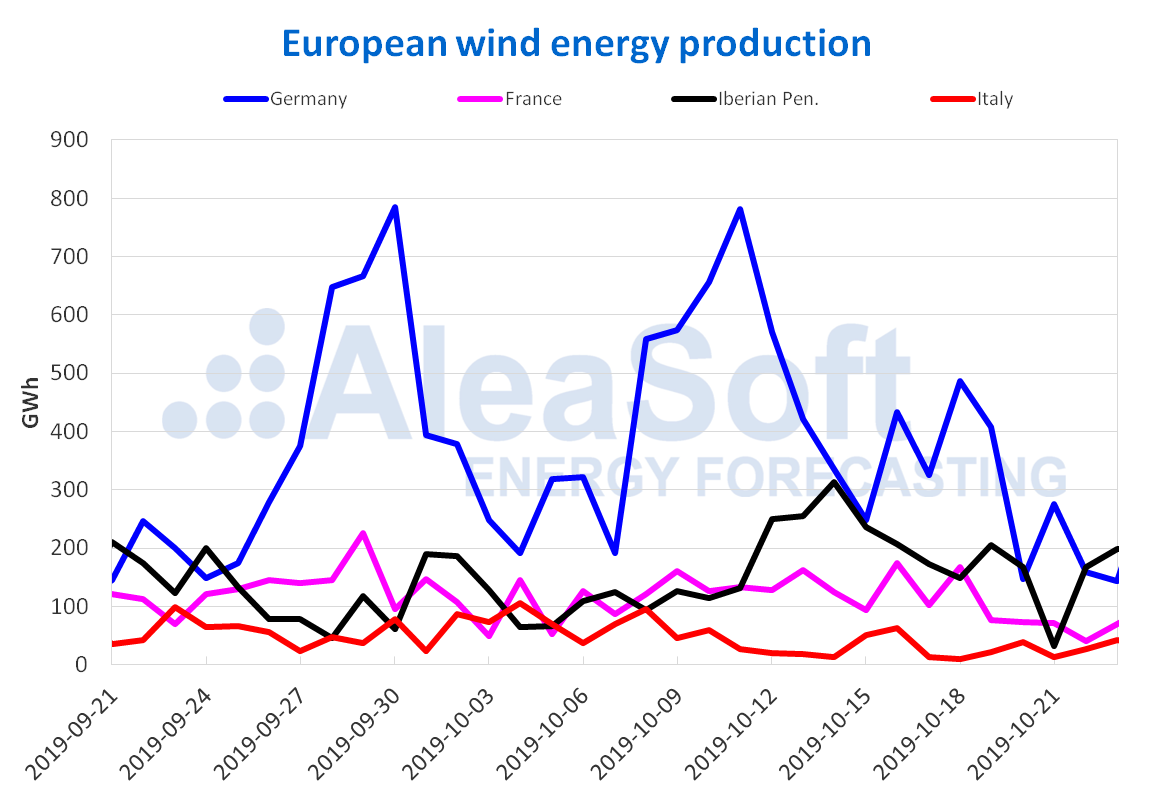 In the first three days of this week, the increase in electricity demand in France stands out, by 7.9% compared to the same period last week. On the contrary, in the rest of the countries the variations were between ‑3.4% in Portugal and 3.0% in Belgium. 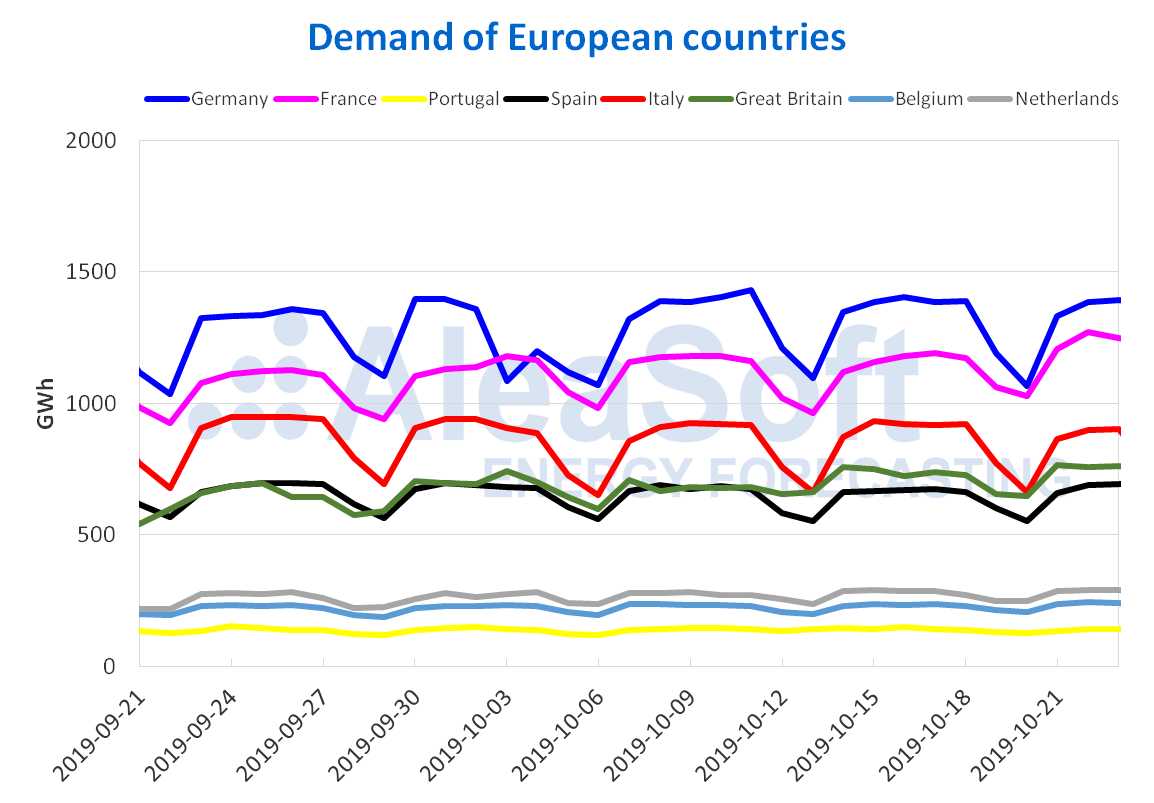 The average solar energy production in Mainland Spain from last Monday to Wednesday decreased by 30% compared to the last week’s average. For the current week at AleaSoft it is expected to end up being similar to the one recorded the previous week.

In the case of the wind energy production in Spain, it was also lower at the beginning of this week compared to last week’s average, registering a decrease of 39%. At AleaSoft it is expected that the production of this week will be lower than that of the last week. This month was not favourable for the production with this technology in Spain, if you compare the production registered until October 23 with the same period of 2018.

The Unit 2 of the Almaraz nuclear power plant remains disconnected from the power grid. This week the nuclear energy production is maintained at 143 GWh per day, similar to last week. 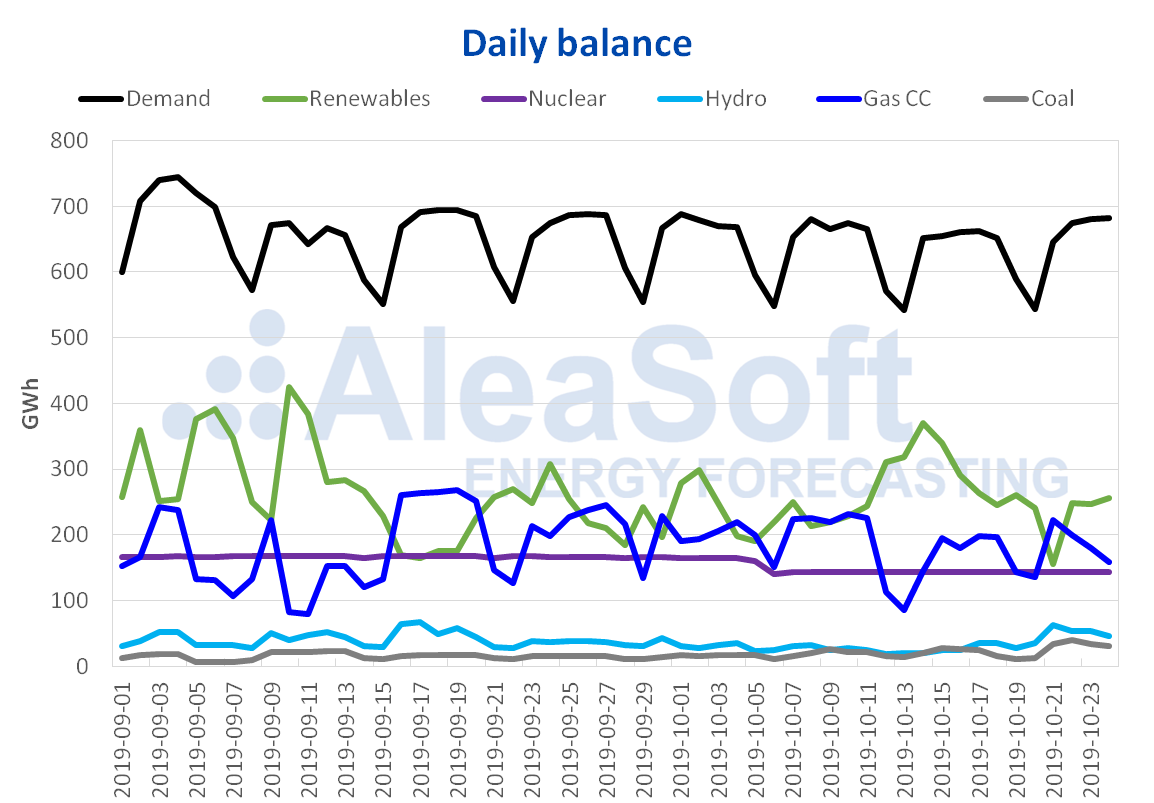 The level of the hydroelectric reserves is currently 7 621 GWh, an increase of 57 GWh compared to the previous week. The current reserves constitute 33% of the total capacity of 23 281 GWh, according to data from the latest Hydrological Bulletin of the Ministry for Ecological Transition.

The average price of the first four days of this week for most European electricity markets rose compared to last week, with the exception of the IPEX market of Italy and the N2EX market of Great Britain, which experienced decreases of 17% and 3.7% respectively. The rest of the countries presented increases of between 2.0% corresponding to the Nord Pool market of the Nordic countries and 11% of the MIBEL market of Spain and Portugal. This behaviour is related to a general decrease in the wind energy production and the solar energy production in some countries, as well as the decrease in the temperatures in most of Europe, which favoured the increase in electricity demand in several countries. Italy was the only country where the temperatures rose slightly which lowered the demand. This, together with a slight increase in the solar energy production, helped lower the prices in the Italian market.

The group of markets with lower prices, during the first four days of this week, reached average prices between €43.94/MWh of the EPEX SPOT market of France and €37.79/MWh of the Nord Pool market, which was the market with the lowest prices in Europe. This market presented a price €4.93/MWh lower than that of the following market with the lowest prices, the EPEX SPOT market of the Netherlands, which averaged €42.72/MWh.

Regarding the group of markets with the highest prices, this week was led by the IPEX market of Italy which, despite the experienced price decline, continues to be the market with the highest average price in Europe, with a value of €49.44/MWh. 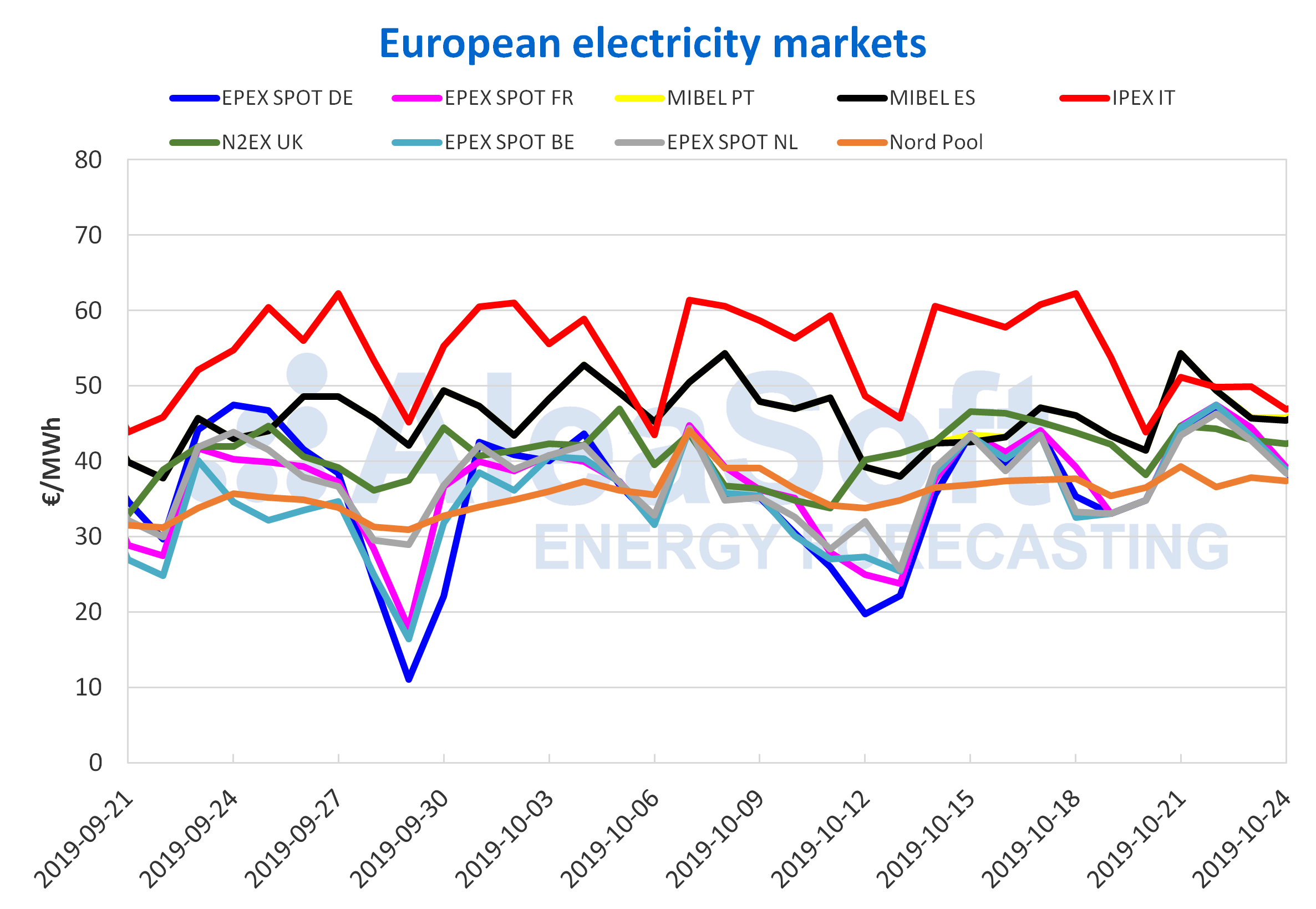 However, the average price of both markets exceeded that of Italy on October 21, positioning these markets as the highest‑priced in Europe. On that day, the price of the MIBEL market in both countries reached €54.34/MWh, a value €3.17/MWh higher than that of the IPEX market of Italy, of €51.17/MWh. The main cause was an exceptionally low wind energy production in the Iberian Peninsula, of 32 GWh.

For the following days, the prices of the MIBEL market of Spain and Portugal decreased and remained below the price of the IPEX market of Italy, thanks to an increase in the wind energy production.

The European electricity futures markets analysed by AleaSoft present, for the most part, a drop in prices so far this week. For the next quarter product, only the ICE and NASDAQ markets of the Nordic countries registered increases, of 1.4% and 0.7% respectively. The rest of the markets experienced declines compared to the settling price of Friday, October 18, between 0.5% and 3.6%. This last value is that of the ICE market of Great Britain, which is the one that shows the greatest change in recent days.

The price drop also extends to the product of the 2020 calendar year. In this case, the prices of the Nordic electricity futures in the NASDAQ market also fall, although not in the ICE market, which presents a 0.2% rise. The percentage values of decreases are from the least pronounced, precisely 0.1% of the NASDAQ market of the Nordic countries to a 3.4% decrease of the Italian EEX market for this product.

The Brent oil futures prices for the month of December in the ICE market this week experienced an upward trend. Although a price of $58.96/bbl was recorded on Monday, October 21, 0.8% lower than the settling price of Friday, October 18, of $59.42/bbl, as of that day the prices were increasing. In this way, the settling price of Thursday, October 24, was $61.67/bbl. These increases respond to the fact that OPEC and its allies are considering agreeing production cuts at a meeting in December and the significant reductions in US oil reserves published on Wednesday. However, in AleaSoft it is expected that in the next days until the end of the month the prices could fall again.

The TTF gas futures prices in the ICE market for the month of November fell continuously so far this week, although on Thursday, October 24, they recovered 1.6% and settled at €15.66/MWh. On Monday, October 21, a settling price of €15.61/MWh was recorded, 2.2% lower than the settling price of the previous Friday, of €15.97/MWh. On Tuesday, October 22, the price decline was more discreet, of 0.1%. On the other hand, the price drop on Wednesday, October 23 was a bit higher, 1.2%, reaching a value of €15.42/MWh, which is the lowest price recorded in this October. The high levels of gas reserves and the wind energy generation conditioned the evolution of the prices at the beginning of the week. In the coming days, the gas prices could continue to fall if the forecasts of higher wind energy production are met by the end of the week.

The API 2 coal futures prices in the ICE market for the month of November this week continued with the downward trend that began on Monday of the previous week, October 14. After the declines experienced since the previous week, the settling price of Monday, October 21, was already $60.40/t.These daily price reductions continued throughout the week, until yesterday, October 24, a settling price of $58.40/t was reached, which is the lowest value of this October. As in the case of gas, the prices could continue to fall this week. Although the decrease in the temperatures in the next week would allow this downward trend to stop in the case of coal and gas.

The CO2 emission rights futures in the EEX market for the December 2019 reference contract started this week with a settling price of €25.94/t, 0.3% above the value of the previous Friday, of €25.87/t, and 7.4% higher than that of Monday of last week. However, on Tuesday, October 22, the prices began to fall, with a 1.0% decrease from the previous day. On Wednesday, October 23, the price drop was even greater, 3.5% compared to the price on Tuesday, reaching a value of €24.76/t, 5.9% lower than the previous Wednesday, 16 October, when the highest price so far this month was recorded, of €26.31/t. However, yesterday, October 24, the prices rose 2.7% and settled at €25.44/MWh. The uncertainty surrounding Brexit is driving this price evolution. Next week will reach the key date of October 31, when Brexit could occur, if the agreement to postpone this date is not approved before. In this case, it is expected that the prices of the CO2 emission rights futures will drop. Meanwhile, the next few days the evolution of the prices may vary depending on the news that is published on this topic. 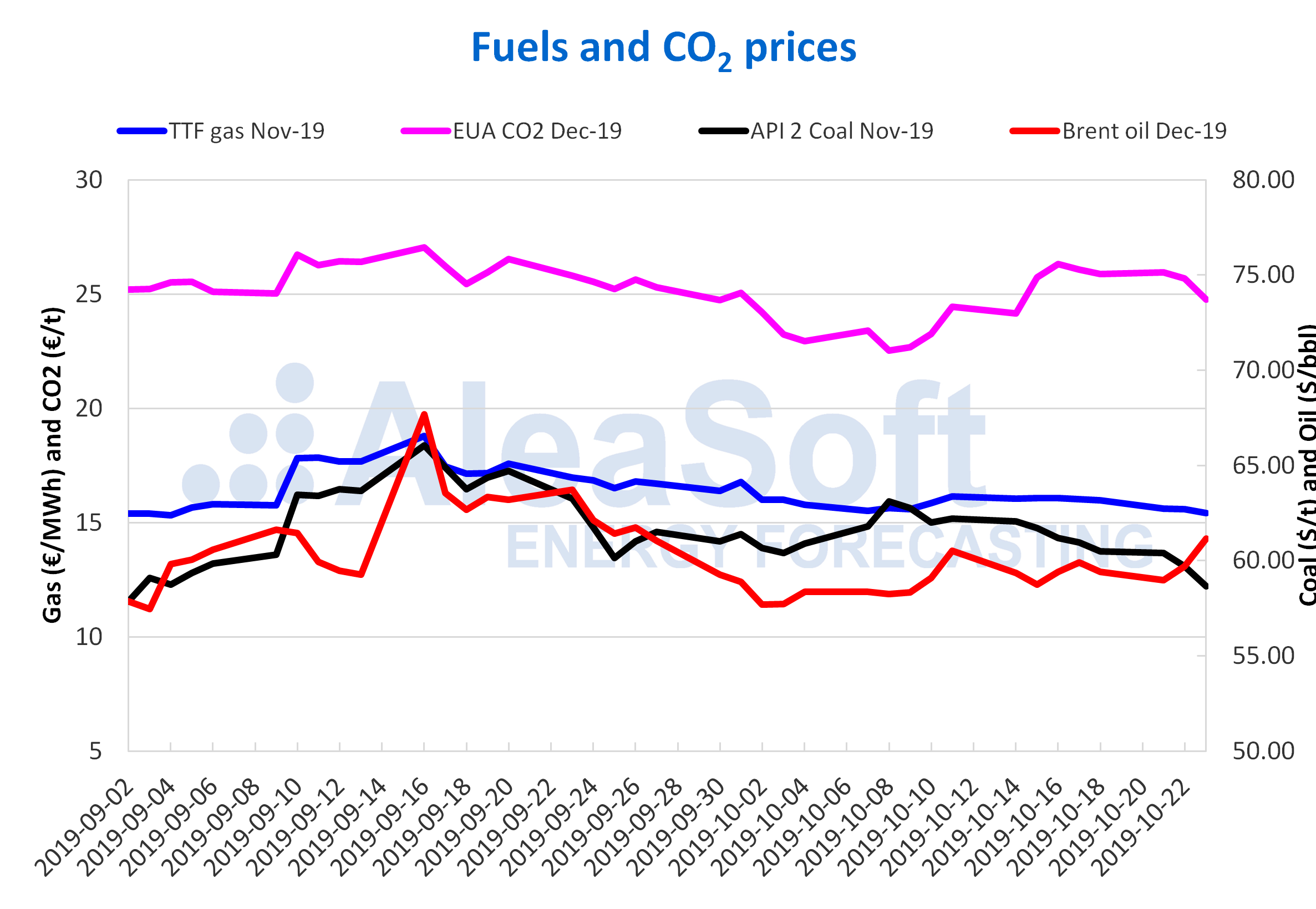