AleaSoft, February 13, 2020. The electricity markets prices in central northern Europe fell earlier this week, while those in the south rose slightly. The variability of the wind energy is the main cause. In markets such as the German and the French, the wind energy production went up, while in the south of the continent it fell. On February 10, there was a record of instant photovoltaic energy production in Spain. In the fuels markets the bearish feeling is maintained by the threat of the coronavirus.

Photovoltaic and solar thermal energy production, wind energy production and electricity demand
In general, the solar energy production of the markets of Europe showed a uniform behaviour during the first three days of this week, with decreases with respect to the average of the previous week. In the markets of France and Italy, the daily production grew from Monday to Wednesday, although the average production of those three days remained 12% and 4.6% below the average of last week respectively. In the case of the Iberian Peninsula and Germany, the generation with this technology was progressively falling and reached differences of 7.7% and 19% respectively.
Performing a year on year analysis of the first 12 days of February, it is remarkable that the solar energy production increased in all countries. Germany continued to lead this comparison, with a 47% rise. In the Iberian Peninsula, the increase was 12%, while in France and Italy there were similar percentage increases, close to 17%.
It is expected that once this week ends, the weekly solar energy production will decrease in Germany compared to that of last week, and will increase in Spain and Italy. 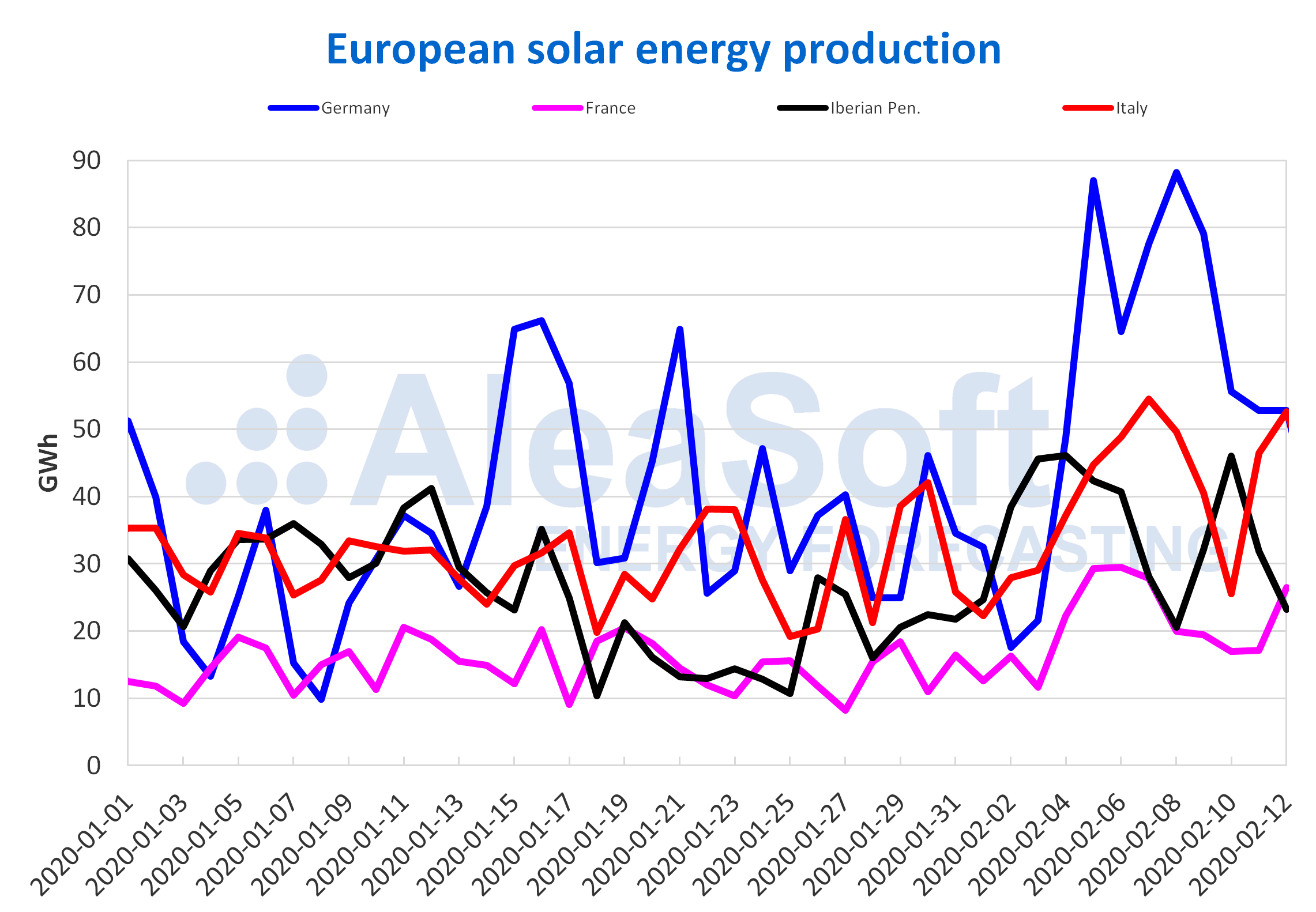 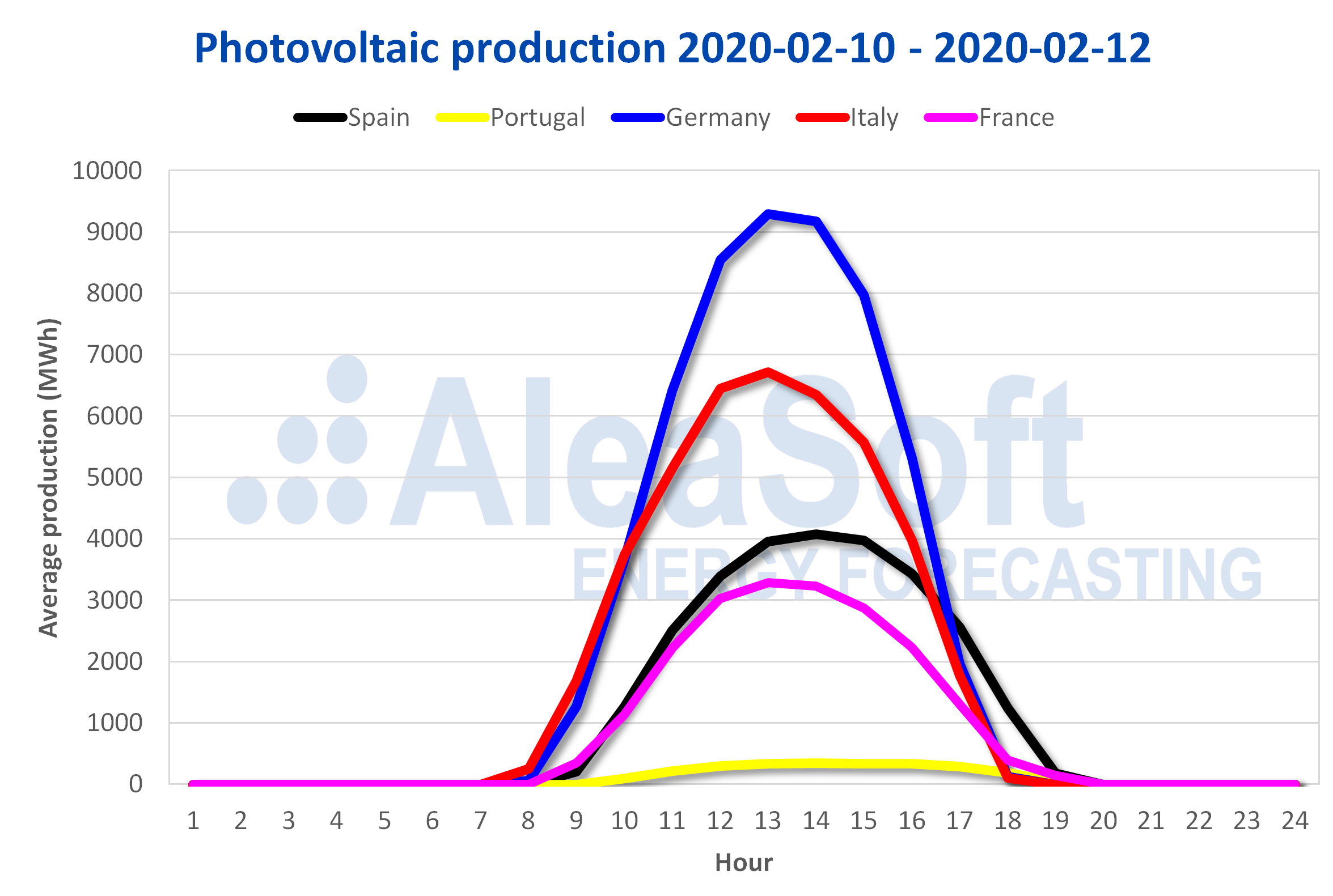 The wind energy production behaved heterogeneously so far this week. In the German market there was a significant increase of 96% compared to last week’s average. The other markets where this type of production increased were the French and the Italian, 60% and 25% respectively, although in the Italian market if the production is compared with that of the same days of last week, it was 15% lower. On the other hand, the generation with this renewable source in Portugal registered a 57% drop.

Only in Germany and France increased the wind energy production from a year‑on‑year point of view during the elapsed days in February. These increases were 28% and 43% respectively. In Portugal the decrease was 28% and in Italy 3.5%.

At the end of this week, the same behaviour of the wind energy production is expected to be maintained in most European markets. The production of Germany and France will be higher than that of last week while that of Portugal and Italy will be lower. 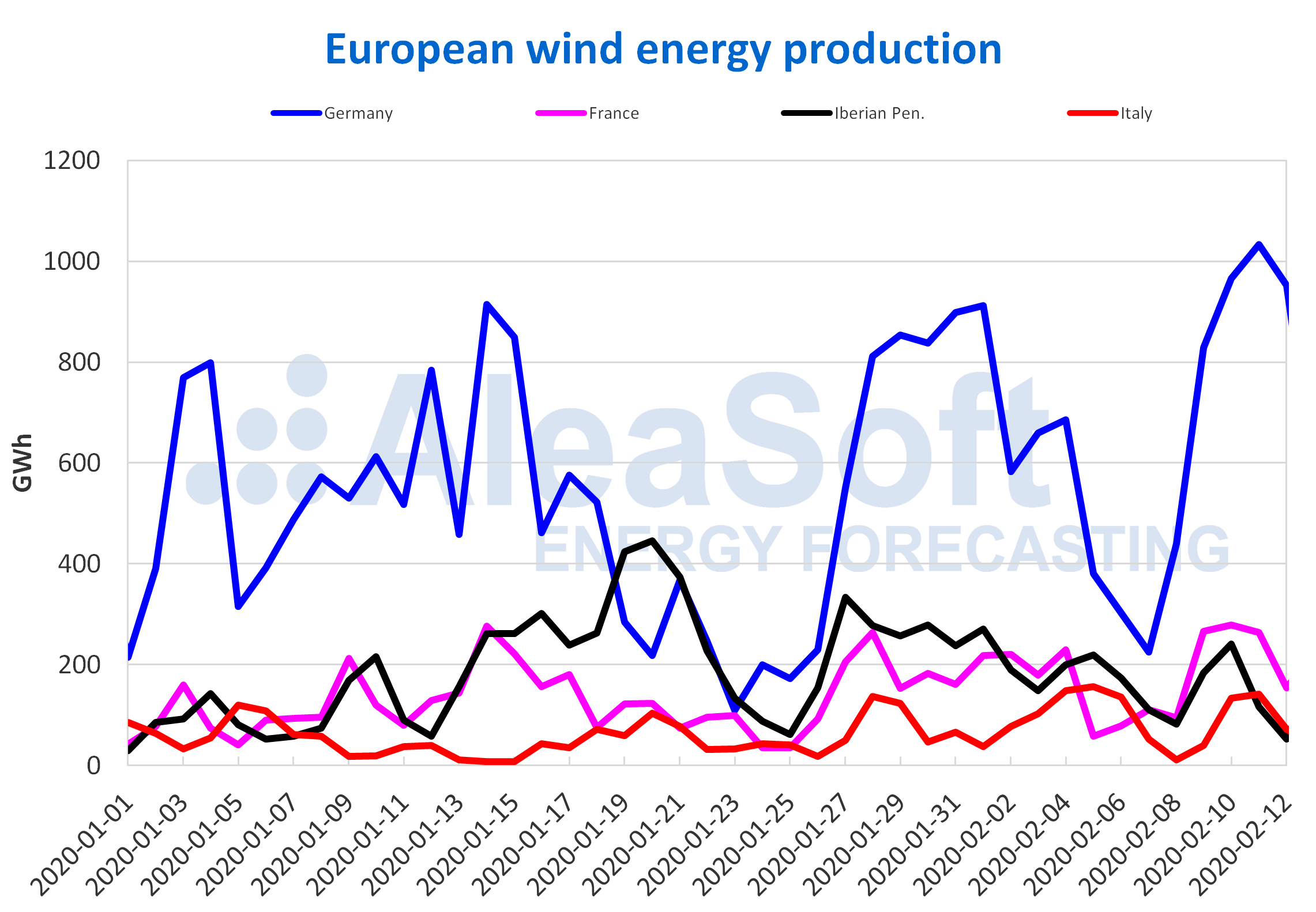 On the other hand, the electricity demand from February 10 to 12 behaved differently in the European markets compared to last week. In Germany, France and Spain, the same variation rate of 2.0% was registered. There were also increases in Portugal and Italy, whose values were 1.4% and 1.1% respectively. In the rest of the markets, the demand fell, standing out the Belgian market with a decrease of 4.0%.

It is expected that at the end of this week the electricity demand will be greater than that of last week in much of the continent. 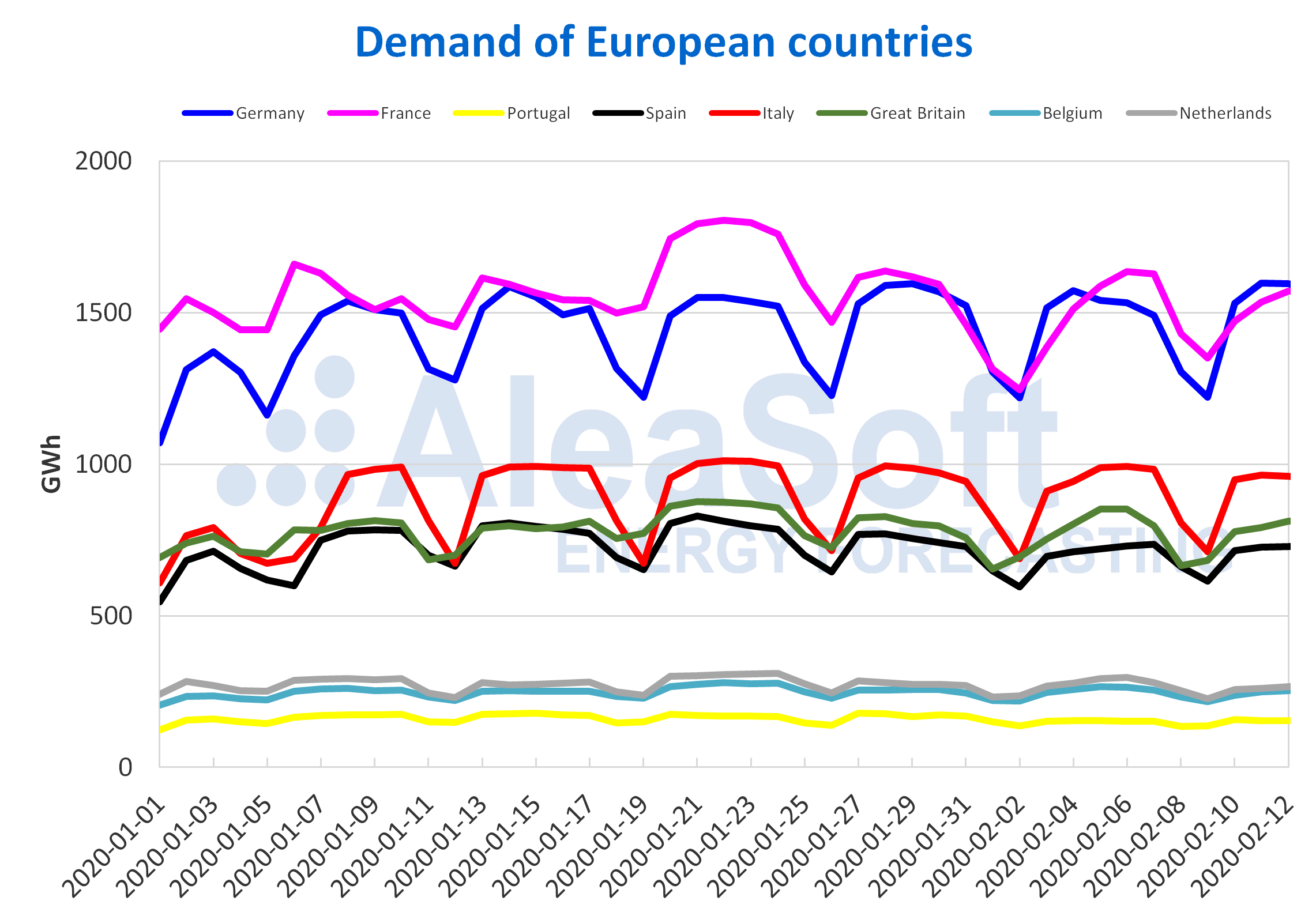 The renewable energy production of Spain for the first three days of this week was less than that of the same days of last week. The set of the photovoltaic and the solar thermal energy registered a fall of 6.5% while the wind energy fell 5.9%. However, a noteworthy fact is that in Spain a new record of 5076 MW of maximum instant photovoltaic generation was imposed on February 10 at 1:58 p.m., according to data published by Red Eléctrica de España (REE).

At AleaSoft it is expected that the solar energy production will rise in the rest of the week and that at the end of the week it will be higher than that of last week. On the other hand, the wind energy production, although it will recover slightly at the weekend, will remain below that registered last week.

The electricity demand for the first three days of this week increased 2.0% compared to the same period of the previous week. For the next week, the average temperatures are expected to continue to fall and demand to increase slightly.

The daily nuclear energy production so far this week was 169 GWh on average. Currently all nuclear power plants are underway. The next scheduled stop in Spain is planned from March 29 to May 6, when the unit 1 of the Almaraz nuclear power plant makes its 28th stop for refuelling. 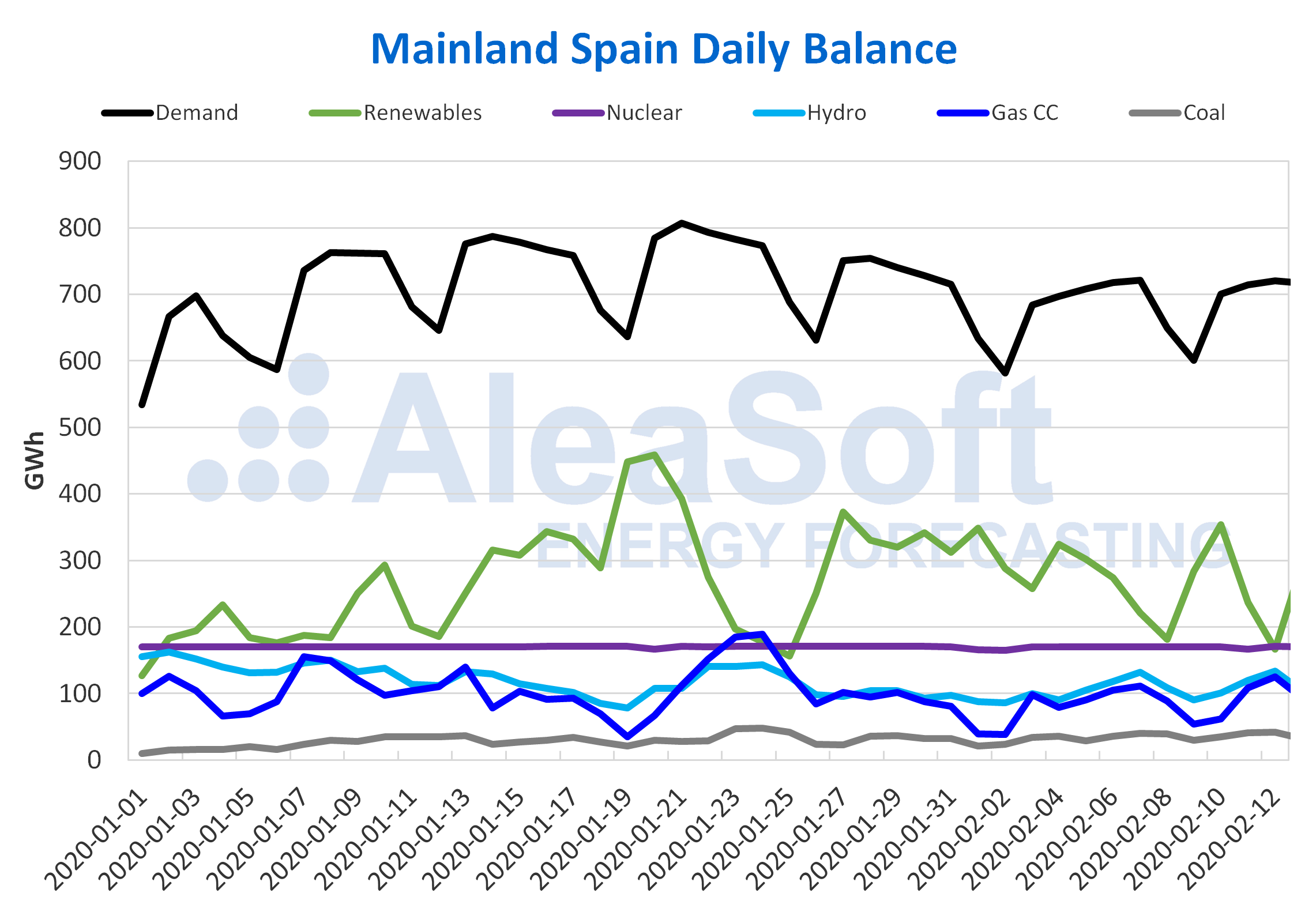 The level of the hydroelectric reserves is currently at 57% of the total capacity. The reserves increased 0.4% since the last report and the available hydroelectric energy is 13 177 GWh, according to data from the latest Hydrological Bulletin of the Ministry for Ecological Transition and Demographic Challenge.

In the first four days of this week, the electricity markets prices in most of Europe registered a significant decrease compared to the homogeneous days of last week. The greatest fall was that of the EPEX SPOT market of Germany, of 40%, and the average price in these four days was €19.14/MWh. In this market there were several hours with negative prices or very close to zero between Monday and Wednesday. The markets of the southern part of Europe, IPEX of Italy and MIBEL of Spain and Portugal, were the only ones in which the average price rose slightly in this period, with the Italian market having the highest growth, of 2.9%.

In general, the wind energy production was the fundamental reason for these behaviours of the electricity markets. In markets such as those of France and Germany, the production with this technology was higher in the first days of this week than in the same period of last week, while in the Iberian Peninsula and Italy it was lower.

In the rest of the days of this week, the prices will fall, since the decrease in demand due to the weekend adds that in some markets, such as the German, the wind energy production will be high. In this market on Sunday negative hourly prices can be reached again. 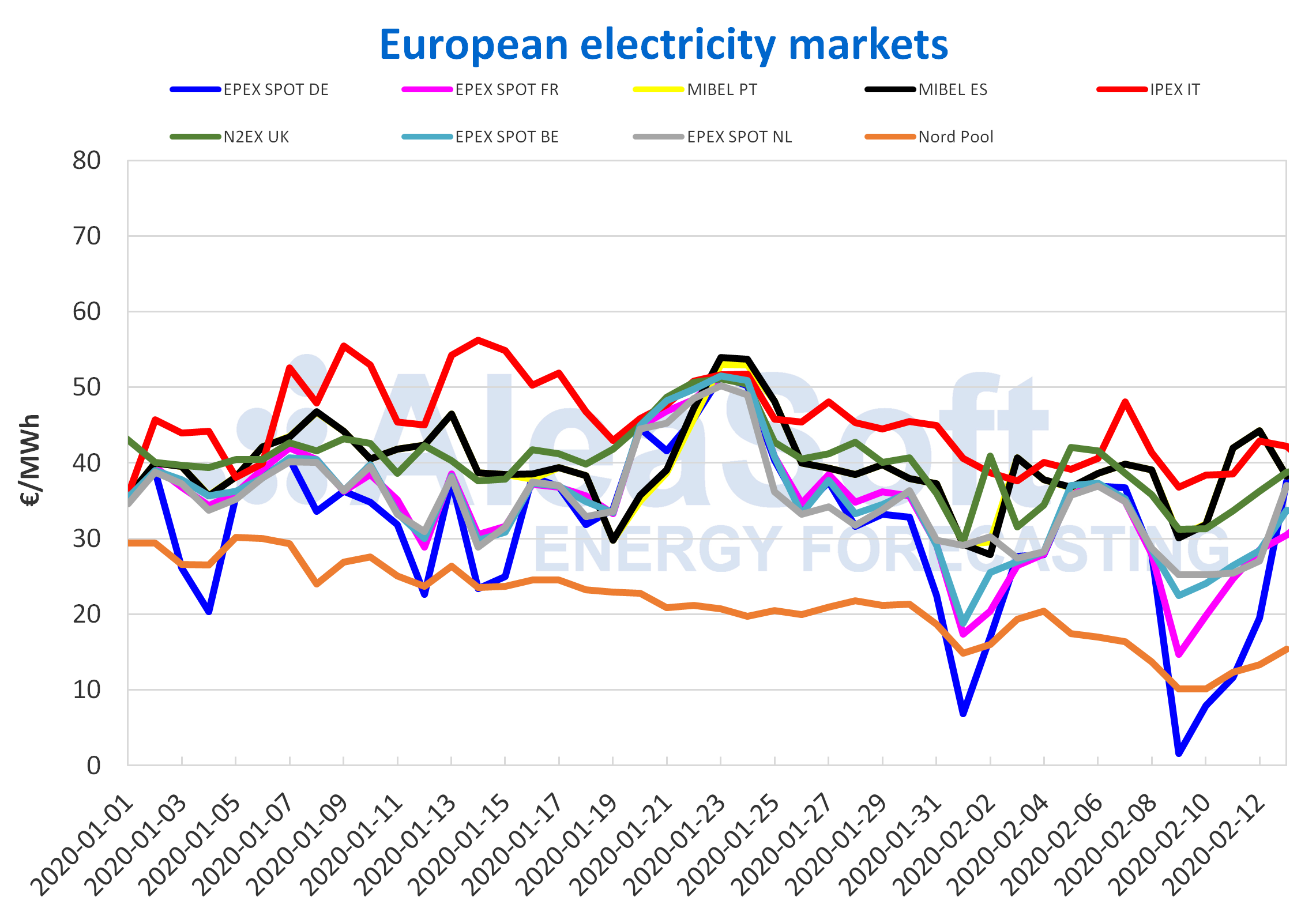 The MIBEL market prices rose earlier this week of February 10. The average price for the first four days of this week was 1.7% higher than the same days of last week in the case of Portugal and 1.5% in the case of Spain. In addition, on Tuesday 11 and Wednesday 12 they were the markets with the highest daily average price in Europe.

In the first three days of this week, the demand increased in Spain and the renewable energy production fell in the week‑on‑week comparison and there was 19% more production with coal and 11% more with combined cycle gas turbines, which led to the increase in prices.

However, at AleaSoft it is expected that this week’s weekly average will be lower than that of last week.

The European electricity futures prices for the next quarter had a heterogeneous behaviour so far this week. Germany, France, Spain and Great Britain registered declines in the EEX market. The prices of Great Britain, Belgium, the Netherlands and the Nordic countries in the ICE market also fell. The OMIP market of Spain and Portugal registered a price decrease of 1.1% in both cases. However, the EEX market of Italy ended the session of yesterday, Wednesday, February 12, with a slight positive difference from Friday, February 7. It also stands out that for the first time in several days, there are signs of recovery of the price of the future Q2‑2020 of the Nordic countries, as the yesterday’s session settlement price was €14.00/MWh both in the ICE market and in the NASDAQ market, this represents a 2.6% increase in its price compared to the previous Friday.

As for the futures for the 2021 calendar year, most of the markets analysed at AleaSoft registered increases. The price fell compared to last Friday only in the Iberian region. The rest of the markets, including the Nordic countries, registered increases. Specifically, the latter are those with the highest percentage increase, but that is due to the low price they present, in absolute terms the price increases in the Nordic countries were exactly €1/MWh both in the ICE market and in the NASDAQ market and in the meanwhile, the increases in the rest of the markets were between €0.95/MWh and €1.38/MWh.

However, the prices could fall again as the demand is expected to continue to decline due to the decrease in transport volume and the temporary closures or reductions in the production of various refineries in Asia related to the coronavirus outbreak. In addition, the news about the increase in US crude reserves will be another factor that will boost the bearish market sentiment.

Next month the OPEC+ will meet to decide on the application of new production cuts, recently recommended by its technical committee to counteract the decline in demand.

The TTF gas in the spot market on Tuesday, February 11, reached an index price of €8.81/MWh, which is the lowest since those registered in the first half of October 2019. The following days of this week, the prices have recovered slightly and the index price for today Thursday, February 13, is €9.07/MWh.

Currently, the gas oversupply continues to prevail and in general the demand is not being high because this winter the temperatures have been less cold and there has been a high wind energy production in some markets, so the prices are expected stay at these low levels in the coming days.

The API 2 coal futures in the ICE market for the month of March 2020 the first days of this week showed a similar behaviour to that of the Brent oil futures. On Monday, February 10, they reached a settlement price of $47.95/t, the lowest of the last two years. Subsequently, they started an upward trend and on Wednesday, February 12, they registered a settlement price of $49.70/t. This value is already above the average of those registered so far this month, of $49.38/t.

The CO2 emission rights futures in the EEX market for the December 2020 reference contract on Monday, February 10, reached a settlement price of €23.16/t, the lowest since those registered in the first half of October 2019. However, the following days the prices recovered and on Wednesday, February 12, the settlement price was €23.88/t, the highest so far this month and the same as the one registered the last day of the previous month. 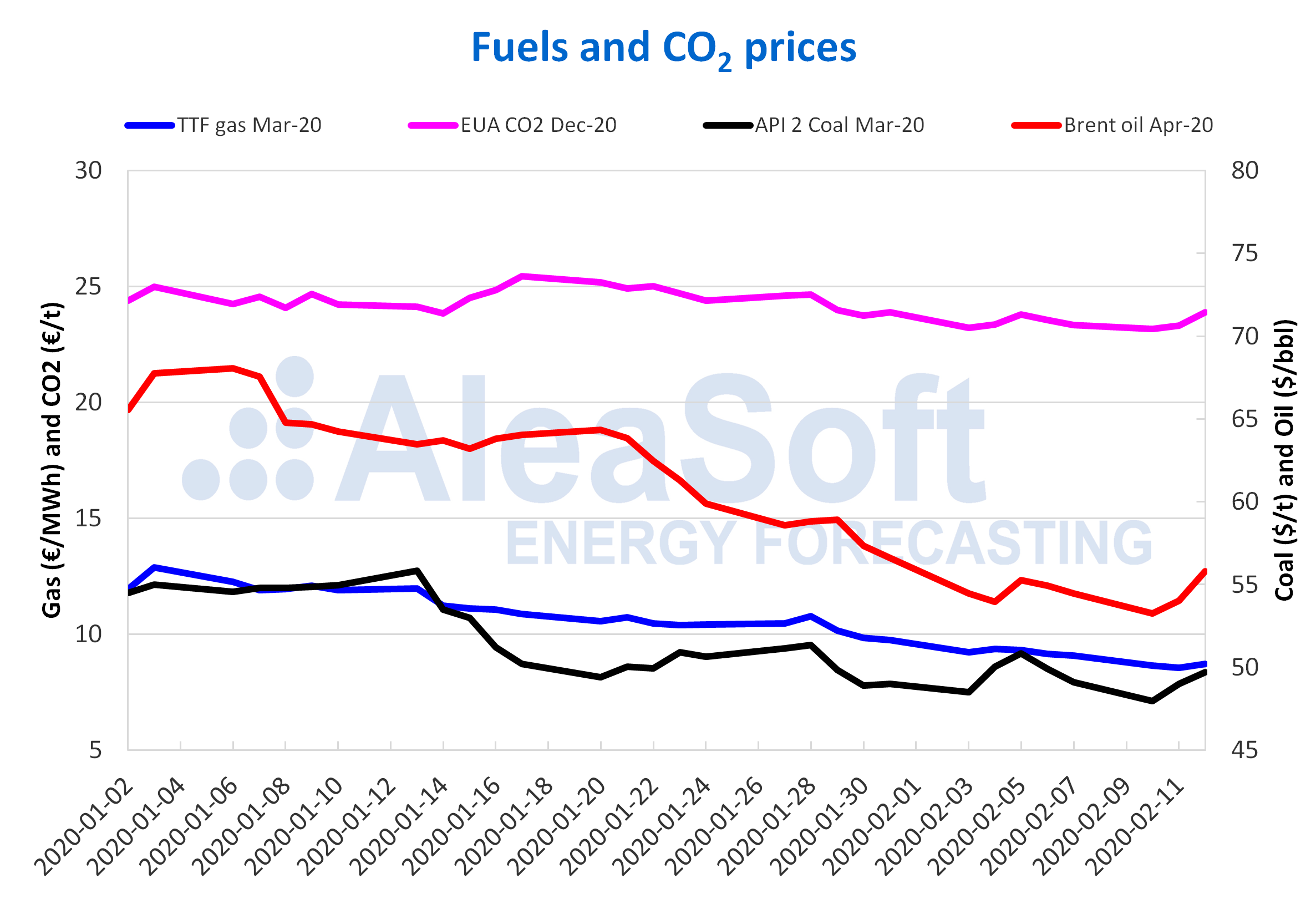