AleaSoft, February 10, 2020. The electricity markets prices will fall this week as high wind energy production in some markets and less cold temperatures on the continent are expected. The low gas prices, which are expected to remain at these levels in the coming days due to the fall in demand because of the coronavirus, add to this fall. Last week, the solar energy production increased in all the markets of the continent, registering the highest daily values so far this year.

Last week of February 3 there were significant increases in the solar energy production of the European electricity markets compared to the week of January 27, reaching the highest daily production values so far this year. The weekly increase in the German market was 111%. In Portugal the increase was 65%, in France 63% and in Spain 55%. The most discreet rise was that of Italy, where there was a 43% increase.

The solar energy production so far in February remains at a higher level than that of the same period of last year. Germany continues to lead these year‑on‑year increases, with a 48% increase between February 1 and 9. In France the rise was 25%, in Italy 21% and in Spain 11%.

At AleaSoft it is expected that this week the solar energy production will fall in European electricity markets compared to last week. 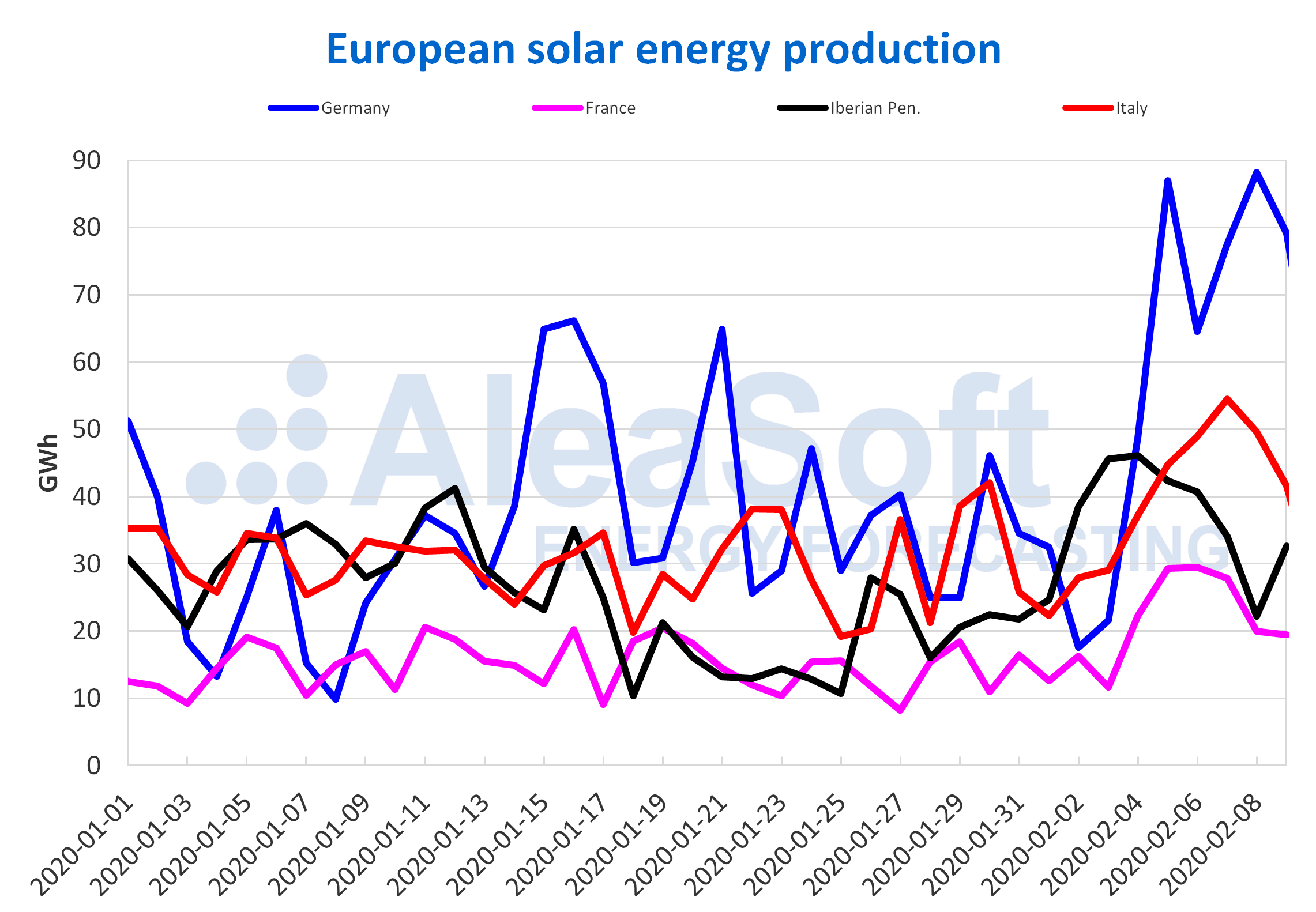 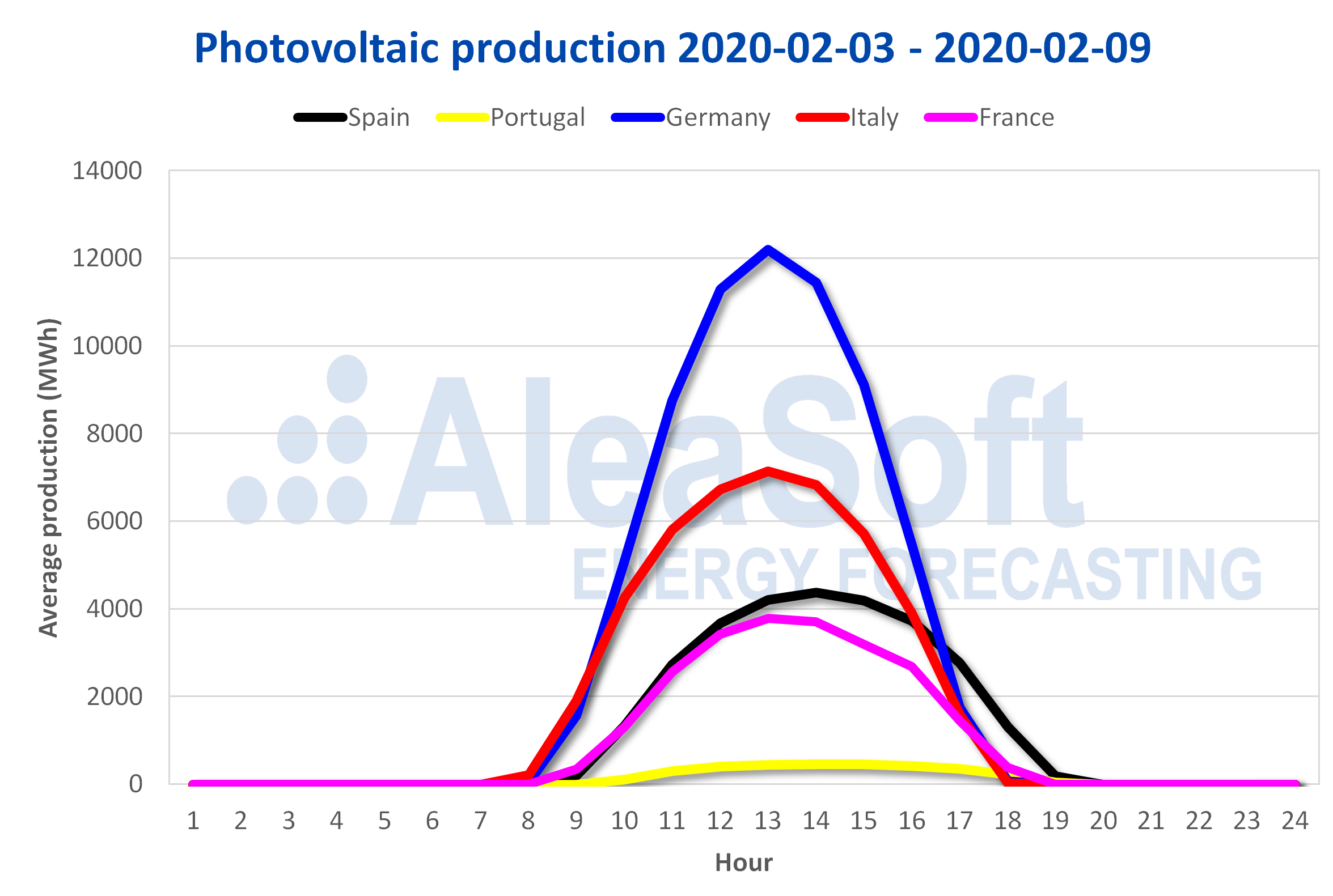 On the other hand, the average wind energy production of last week was lower than that of the week of January 27 in most markets, something that had already happened the previous week. Italy was the only market where there was an increase, whose value was 21%. The Portuguese market suffered the worst part by decreasing the production by 46%. The declines in Spain, Germany and France were 38%, 35% and 28%, respectively. Although the weekly average fell, on Sunday, February 9, the wind energy production in several markets was significantly higher than that of the previous days. For example, in France and Germany the production increased by 181% and 88% respectively compared to that of Saturday.

In the year‑on‑year analysis from February 1 to 9, Germany and France show advances in the wind energy production of 17% and 28% respectively. In the rest of the markets, the differences ranged between ‑4.2% of Italy and ‑17% of Spain.

For this week an important recovery is expected in Germany and France and little variation in the rest of the continent’s markets. 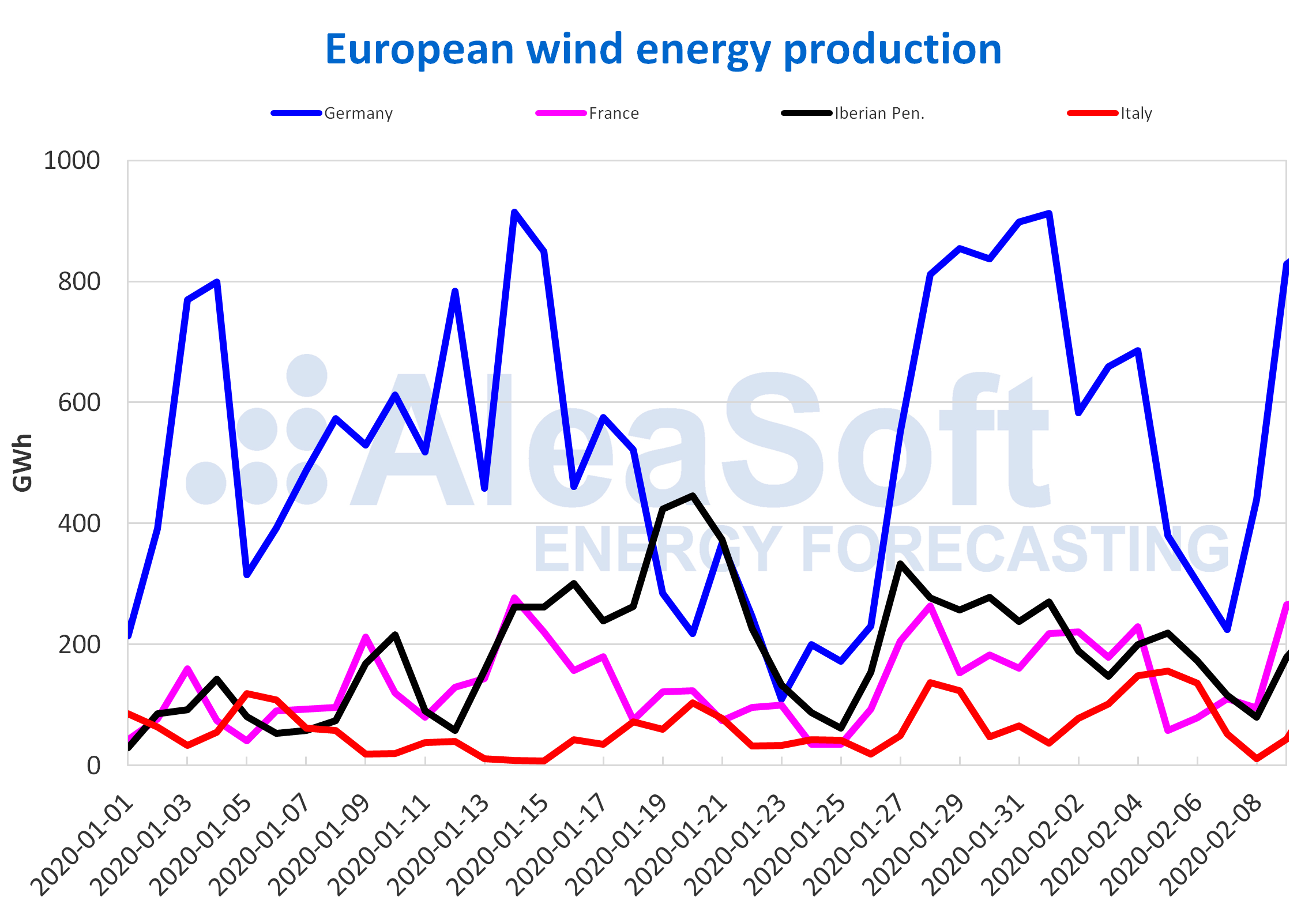 The average temperatures were colder last week compared to the previous one. In spite of this, the electricity demand fell in great part of the markets of the continent. In Portugal, it decreased by 7.4%, in Spain by 2.7%, in Germany by 1.5% and in Italy by 0.4%. Increases were recorded in the rest of the markets, with values between 0.4% in France and 2.2% in the Netherlands.

During this week, the temperatures will generally be less cold than last week and at AleaSoft similar demand values are expected in the European markets. 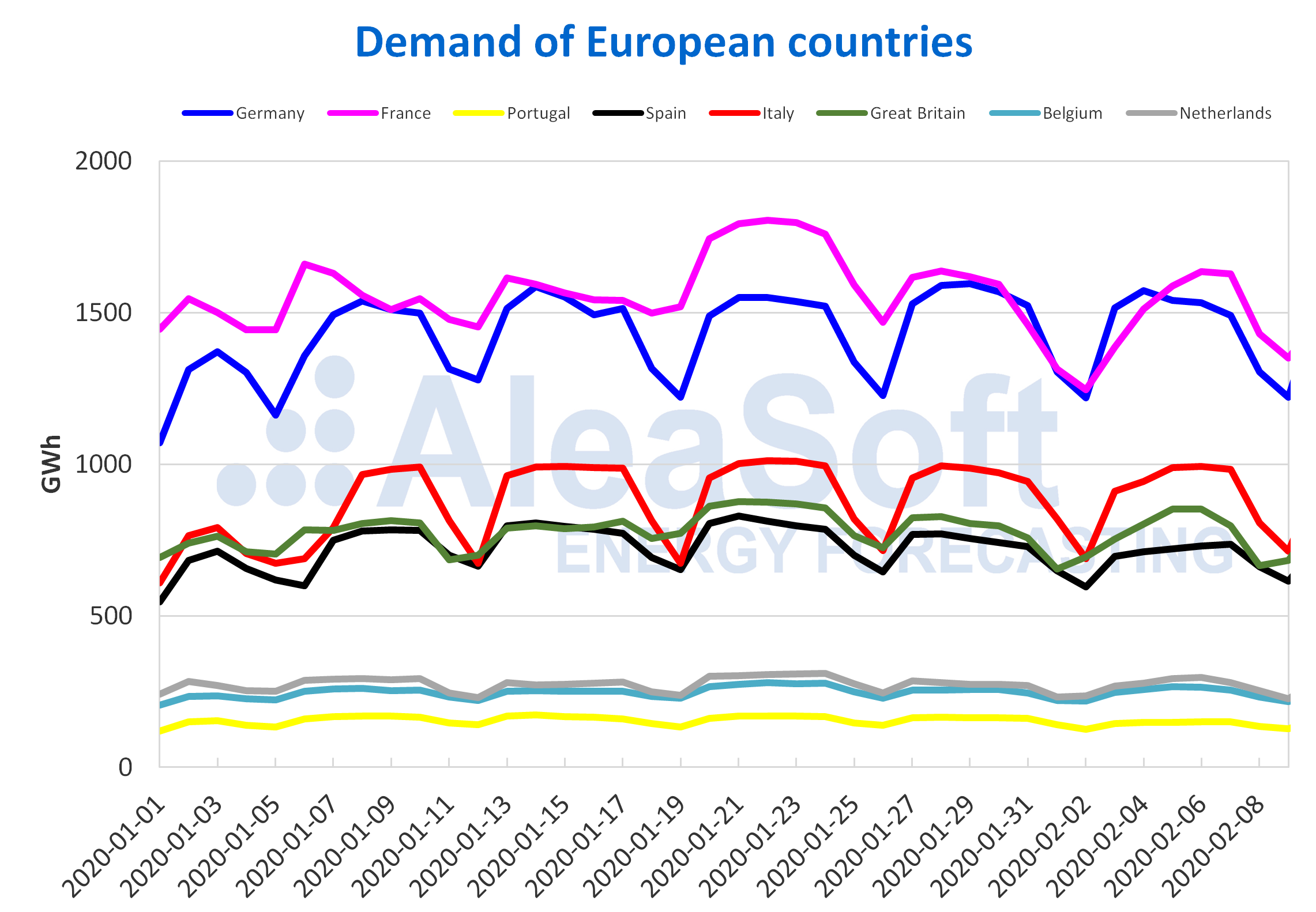 The Ministry of Ecological and Inclusive Transition of France revealed last Thursday, February 6, the results of the ninth solar photovoltaic energy auction in the country. In the auction, 146.8 MW were awarded to 306 winning projects. In the first category, which was open to proposals between 100 kW and 500 kW, the average price settled at €96.49/MWh, while for projects in the range of 500 kW ‑ 8 MW the average price was somewhat lower, of €86.17/MWh.

Last week the electricity markets behaved differently if the average prices are compared with those of the previous week. In the EPEX SPOT market of Germany and Belgium and the MIBEL market of Spain and Portugal, the prices rose and in the rest of the markets they fell. The greatest increase was that of the German market, of 7.4%, although the average price of the week, of €27.85/MWh is the second lowest in Europe. On the other hand, the greatest decrease was that of the Nord Pool market of the Nordic countries, of 15%, which made it close the week with an average of €16.32/MWh. Last week this was the market with the lowest price on the continent, with daily values of less than €20/MWh that place it very separate from the rest of European markets. The market prices of the Nordic countries are experiencing a decreasing trend since the beginning of November 2019, mainly due to the high hydroelectric reserves available in the region.

The EPEX SPOT markets of Germany, France, Belgium and the Netherlands, which are usually in the group with the lowest prices on the continent next to the Nord Pool market, were very coupled between Monday and Saturday of last week, with daily values between €26/MWh and €37/MWh. However, yesterday Sunday and today Monday had more uneven daily prices. This behaviour was partly due to the high wind and solar energy production that resulted in negative prices in the German market twelve hours on Sunday and six on Monday, reaching a daily average of €1.57/MWh and €7.88/MWh respectively.

In the group of markets with the highest prices in Europe, composed of the IPEX market of Italy, the N2EX market of Great Britain and the MIBEL market, the prices were around €40/MWh most of last week. The Italian market, which reached a price of €48.07/MWh on Friday 7, was the market with the highest price most of the days of the week, except on day 3 when it was surpassed by the Iberian market, and on days 5 and 6, when the British market occupied that position.

In the week that begins today, February 10, the European electricity markets prices are expected to fall widely. This fall will be influenced by the increase in wind energy production in some of the markets, the less cold temperatures and the low gas and coal prices.

The European electricity futures markets prices for the product of the second quarter of 2020 continued their downward trend over the past week. The EEX market of France was the one with the lowest variation between the settlements of Friday, January 31, and Friday, February 7, with a drop of 1.4%. On the other hand, the Nordic region, both in the ICE market and in the NASDAQ market, continues to lead the descents. The settlement price of these markets last Friday, February 7, was €13.64/MWh and €13.65/MWh respectively, 19% lower than that of the previous Friday.

The behaviour of this product of the futures of the Nordic countries, which is already being negotiated at a fairly low price, may continue to be low if the weather forecasts continue to be so humid and temperate. Several forecasts show rainfall and snowfall equivalent to between 7.8 TWh and 11.4 TWh of hydroelectric power for these days. These figures are well above the usual for this time of year, which is on average about 6 TWh. The temperatures are also forecast at almost 3° C above the average for these dates. For all this, the scenario of 2015 can be repeated, when the prices fell below €10/MWh. There is currently an estimated of 6 TWh in snow reserves in the high mountains, which usually melts in Q3.

As for the electricity futures for the 2021 calendar year, the prices of the main European markets oscillated around the settlement price of Friday, January 31, throughout the past week. The OMIP market of Spain and Portugal was the one with the greatest variation at the end of Friday, February 7, with a drop of 2.0% in both countries. On the other hand, the ICE market of the Netherlands had a net variation of only €0.01/MWh between the settlements of both weeks and the German EEX market registered on February 7 exactly the same settlement price as the previous Friday, January 31, €40.95/MWh.

During the past week, the OPEC+ technical committee met in Vienna, which recommends extending the production cuts throughout the year 2020 and an additional cut at the end of the second quarter in order to stabilise the oil prices in the face of the decline of its consumption due to the coronavirus epidemic. However, the OPEC+ member states have yet to reach an agreement on these cuts, which, in addition, may not be sufficient to avoid an excess supply. Therefore, it is expected that, for the moment, the fall in demand related to the coronavirus will continue to exert its influence on the prices.

The TTF gas futures in the ICE market for the month of March 2020 continued to decline during the past week, with the only exception of a 1.7% increase compared to the previous day on Tuesday, February 4. As a result of these declines, a settlement price of €9.07/MWh was reached on Friday, February 7, which is the lowest of the last two years and 7.0% lower than that of Friday of the previous week. Taking into account the existing oversupply in the market and the decrease in demand associated with the coronavirus, it is not ruled out that gas prices may continue to fall in the coming days.

The TTF gas prices in the spot market during the past week, despite the increases registered on Wednesday and Thursday, decreased 5.5% from €9.67/MWh of Monday to €9.14/MWh of the weekend. The index price on Monday, February 10, is €9.12/MWh, the lowest since those registered in the first half of October 2019.

The API 2 coal futures in the ICE market for the month of March 2020 began the week of Monday, February 3, with the lowest settlement price of the last two years, of $48.50/t. On the other hand, on Tuesday and Wednesday the prices rose to $50.85/t of Wednesday, February 5. But the last days of the week, the prices fell again reaching a settlement price of $49.10/t on Friday, only $0.10/t higher than that of the previous Friday. Although the demand may rise because China increases its imports to counteract the decline in its production in the midst of the coronavirus crisis, the fact that the gas prices are being so low will put a brake on rising coal prices.

The CO2 emission rights futures in the EEX market for the reference contract of December 2020 registered settlement prices below €24/t the whole last week. The values ranged between €23.22/t of Monday, February 3, which is the lowest value since the first half of October 2019, and €23.78/t of Wednesday 5. On Friday, February 7, the settlement price was €23.33/t, 2.3% lower than that of the previous Friday. In the coming days, the prices are expected to remain below €24/t. 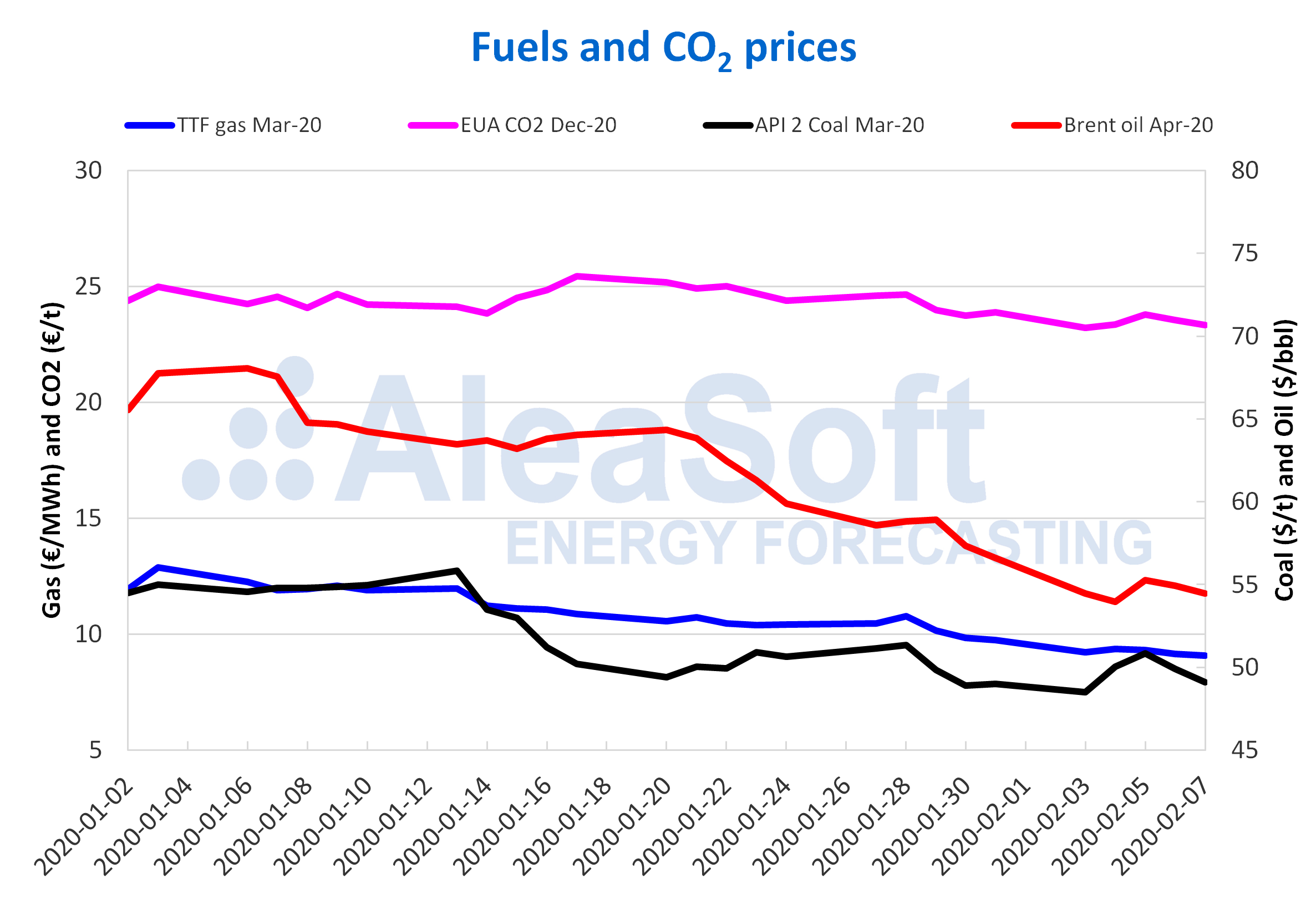